Kajagoogoo are permanent residents of Camp Redwood and Courtney’s all out of bleach, a true crime journalist meets her end via Richard Ramirez and a swamp monster emerges. Farfetched? Nah, this is just the penultimate AHS: 1984 episode.

The camp festival is on its way and Margaret Booth’s plan is finally unveiled: kill off all the acts to make a permanent memorial to the golden 80s that will draw crowds for years to come. Black Mirror, anyone? The only saving grace is that Richard Ramirez and therefore the forces of Satan are on hand to protect Billy Idol from the melee, if Bruce can resist the temptation to up his homicide stats when he’s so close to the action. Of course, the series couldn’t resist bringing forth a nosy writer making a quick buck out of the camp’s grisly tales and with her dies the hope that anybody will discover Brooke’s innocence. Whether Donna and Brooke make it out alive remains to be seen, but slashers rarely leave two final girls.

Trashing all hopes of Xavier and Montana’s relationship, Montana makes a heartfelt reunion with Trevor in the episode’s attempt at poignancy exploring the ghosts’ true feelings. When Trevor drops the ‘L’ bomb, this exposes the feisty blonde’s desperate hope for someone to help the ghosts out of their hell. It’s hard to tell which is the bigger threat to Trevor’s idea of happiness – the omnipresent eye of psycho wife Margaret Booth or the mere presence of an undead Limahl.

More shocking than Xavier’s tie dye trousers is his continually shameless 180 character assassination – this ruthless killer with no sympathy for Jingles’ son has conveniently forgotten he was once crying his eyes out at every scary noise. Speaking of unexplained developments, Mr Jingles somewhat miraculously ‘returns’ his brother Bobby to his mother and subsequently creates something of a safe haven for their family in the camp, earning Lavinia’s forgiveness. Exactly how Bobby suddenly emerged from the lake simply by Richter floating over in a boat is something the writers considered unnecessary information.

Last week, eagle-eyed fans noted Mr Jingles’ family home is identical to Kit Walker’s alien-attacked home from Asylum. Actor Cody Fern noted at the Episode 100 event that he’d like a series set in outer space, and this week’s passing mentions of being dead feeling like being ‘lost in space’ gather momentum to the fan theory that season 10 may revolve around the presence of alien lifeforms.

AHS’ love letter to the eighties nears its end and we finally have some goals to work towards at the festival, but the real question is how loveable camp chef Bertie will re-emerge to save the day. 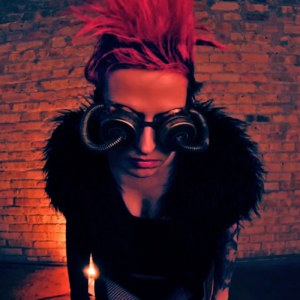 News: The Joy Thieves Release Remix Of 'Glass Eyes' By I Ya Toyah ‘Insanity is the only sane reaction to an insane...
Copyright 2017 Devolution Magazine. All Right Reserved.
Back to top