Justin, Jenny, Alyx, and Rosie from Petty Phase chatted to Mark Bestford at Rebellion Festival about their love of Daisy Rock Guitars, their ideal festival, and why Your Woman by White Town is possibly the greatest song ever written. 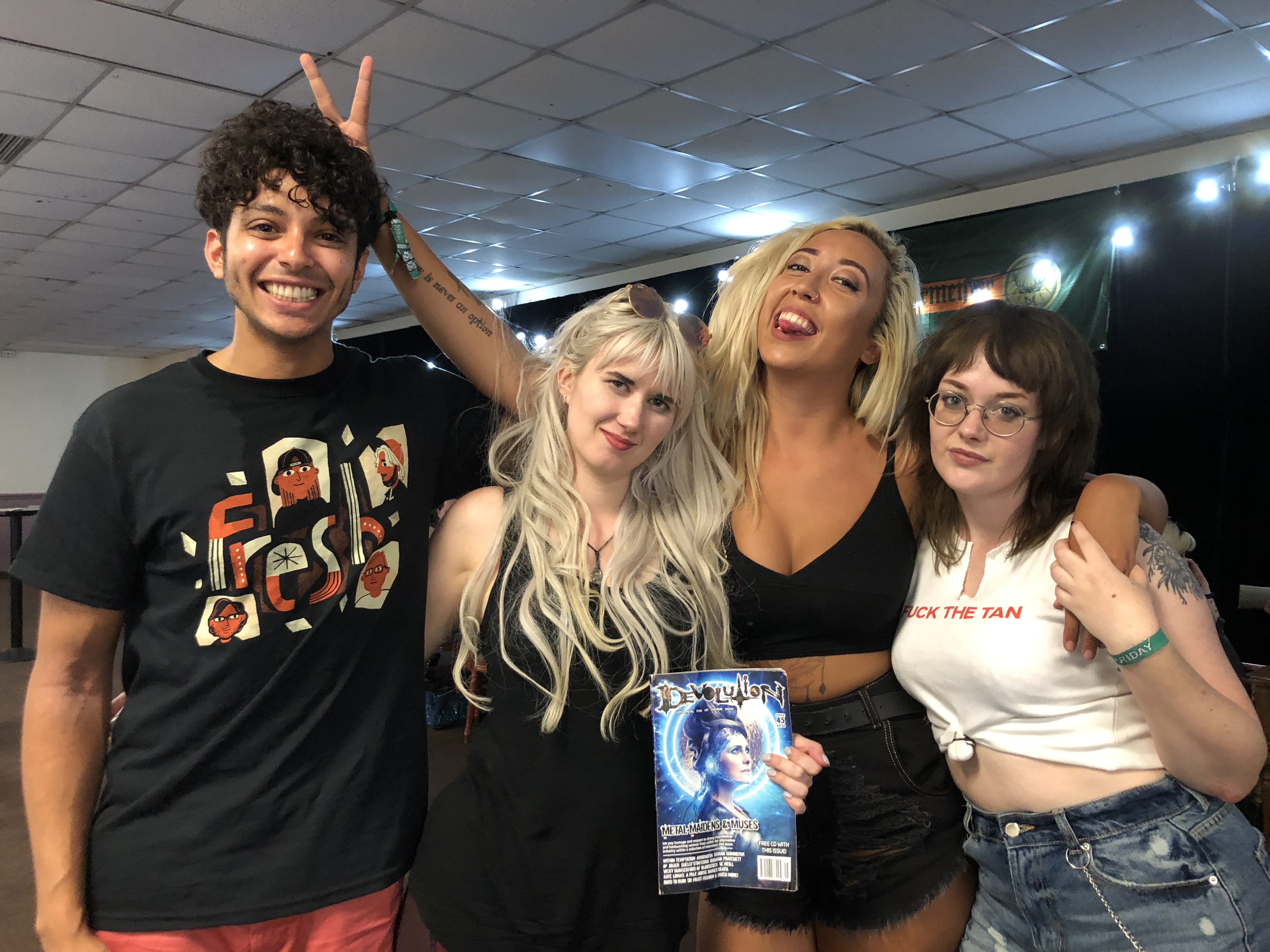 Who would you like to be endorsed by and why?

Rosie: We want to be endorsed by Daisy Rock Guitars, because we love them so much. We like them because they’re flowers, and hearts, especially why Justin like them.”
Alyx “Justin wants a pink drumkit don’t you.”
Jenny “He wants a heart shaped bass drum please.”
Alyx “And it needs to pink and glitter, there should be no other colour.”
Justin “Yeah.”
Rosie “And my first guitar was a Daisy Rock guitar, that I first started learning guitar on.”
Jenny “I didn’t know that.”
Rosie “Yes it is, and it came with a little book and everything.”
Alyx “That’s nice.”

Who is your dream line-up, living or dead?

Rosie “Oh that’s so hard because we all like different things.”
Alyx “We’re going to be all very different.”
Rosie “Different people all make a band”

Pick a person each

Rosie “This is hard.”
Alyx “This is not very punk, but I’m obsessed with Michael Jackson and I’ve not seen him before because he’s dead.”
Justiin “But he’s a pervert.”
Alyx “He’s not a pervert, he’s a nice young man, he’s got problems.”
Rosie “It’s a touchy subject, if you’ll pardon the pun.”
Alyx “He’s a wonderful performer Justin. Sorry he just called Michael Jackson a pervert.”
Rosie “Chill out. Oh, I don’t know.”
Alyx “Gary Glitter.”
Rosie “Put them all in.”
Alyx “Rolf Harris?”
Rosie “I don’t know.”

Alyx “Pervert Phase.”
Rosie “The Perverts, yeah. That’s a good name actually. Who do we like? It’s not really a punk band but I really like Stevie Nicks, or maybe Bowie.”
Alyx “Bowie, Michael Jackson, and Stevie Nicks, I like that.”
Rosie “Who are you putting in there?”
Justin “Would I pick the drummer? Probably, I’ll pick a man called Bill Stevenson, who is the drummer for Descendants. He’s a good drummer. A very good drummer.”
Rosie “Good choice.”

Justin “Probably today.”
Jenny “Probably that one.”
Rosie “It might not be actually.”
Alyx “Village Green, yeah.”
Rosie “We played at Village Green, what year was that? 2016?”
Alyx “It’s in Thorpe Park, it’s like an arts festival.”
Justin “Was that when you were in the tent?”
Alyx “No, it was the main stage.”
Rosie “So what was that?”
Alyx “It was 2016.”
Rosie “Some people were there.”
Alyx “A vast group of people.”
Rosie “Yeah. Seven”
Alyx “And a half.”
Justin “You played to seven and a half people?”
Alyx “Yeah, that was a good concert. [laughs]”
Rosie “It was quality more than quantity.”
Jenny “It was all about quality”
Alyx “It was a good couple of people.”
Jenny “Quality vodka.”
Alyx “Grey Goose wasn’t it?”

Justin “I don’t know, probably a mix of genres.”
Rosie “Definitely a mix.”
Justin “When you just listen to punk all the time it can get a bit dull can’t it.”
Alyx “We have such varied music tastes as well don’t we.”
Rosie “We all like various themes of punk music, but it’s not our only inspirations.”
Jenny “I reckon like an outdoor festival, instead of calling it the what stage, you’d call it the genre that it is.”
Alyx “The punk stage.”
Jenny “So if you want to just watch punk you can just stay there.”
Alyx “That’s a good idea, so you don’t get confused. Simple, effective.”
Jenny “Then you don’t get lost. The Britpop stage.”
Rosie “Chinese food would be nice.”
Alyx “Curry sauce, spring rolls, chips. That, just that.”

What festival do you want to play?

Jenny “The Reading festival.”
Alyx “[laughs]”
Rosie “It would be nice to play here on another stage, a bigger stage. We got a really good crowd on the smallest stage, on the Introducing stage. But maybe here on a bigger stage would be good.”
Alyx “This crowd is great. This crowd is really good.”
Rosie “They’re so nice.”
Alyx “So supportive and really nice.”
Justin “There’s one called the Manchester Punk Festival which is quite good. I think I would quite like to play there one day. That would be nice.”

What future goals or concepts do you have?

Alyx “We’re all going to be quite communal, yet different. Shall we go round?”
Rosie “I don’t know, well as a band, what future goals? I guess we need to get some videos up. Videos would be good, and we probably should record some more stuff. We have one EP, and probably play abroad more. We’ve got a gig in Munich in December. Is it the 7th? But that’s the first time we’ve played abroad, so maybe do that.”
Alyx “Any personal goals? Sorry.”
Rosie “I have no personal goals. Learning Japanese”
Alyx “Yeah, as a band it’s the same thing, just keep building, to get onto more festivals, record more videos, etc. Personally, I present a radio show, it’s a punk radio show. I’m going to bring it out there.”
Justin “Aren’t you DJing now?”
Alyx “I am, in about half an.hour I think. So yeah, general band wise he same thing, just keep working.”
Rosie “A tour would be good.”
Alyx “A tour would be wonderful.”

What is the greatest song of all time?

Rosie “That is difficult.”
Jenny “That’s a broad pool.”
Rosie “That is so hard, that’s difficult.”
Alyx “It all depends genre wise again.”
Jenny “What do you look for.”
Alyx “What is a great song?”
Rosie “That is a very interesting question.”
Jenny “We did cover Commando by The Ramones and we say that is a very great song.”
Alyx “That is a great song.”
Rosie “We do like Commando. I look for various things in a song. Energy. Lyrical content.”
Alyx “What do you think Justin?”
Justin “Your Woman by White Town. He’s like a brown bloke who grew up in Derby in the 90s and made his song in his bedroom and it got to number one.”
Alyx “That’s nice.”
Rosie “Greatest song in the world, have a listen to that.”
Jenny “I’ve never heard it.”
Alyx “Neither have I, but I’ll listen to it now.”
Justin “It’s so good. And it still sounds fresh.”

Is the concept album dead?

Rosie “No, I don’t think so. There’s plenty of concept albums still being made. I don’t know if we’d make one. For us, we don’t write conceptually when we’re writing songs. They’re not in a similar vein or whatever, we just write what we want. But, I would listen to a concept album because I do things that thought should be put into. If you’re going for a certain theme or you’ve got a certain message that you want to flow through your entire album then I think concept albums completely work. And people are still making concept albums, so I don’t think so. But probably not for us. Unless the concept’s we’re angry.”
Alyx “We have arguments with people and we call each other up at weird times in the morning and then just create a song about it.”

The whole idea of the question is that with streaming people pick a song, they don’t listen to the whole album

Alyx “They don’t listen to the whole thing, yeah.”
Rosie “It’s true, but I think it’s making a bit of a comeback, in terms of like, when vinyl came back, which was in the last five to seven years I suppose, I think people listen to it a bit more. And also on Spotify when you have suggested artists sometimes you can just leave it on and if you finish listening to an artist it will roll into something similar and that’s how I’ve discovered loads.”
Alyx “Like with car music, driving is perfect for something like that.”
Rosie “Yeah, I’ll put a playlist on, or an album.”
Alyx “Yeah, driving’s good for that.” 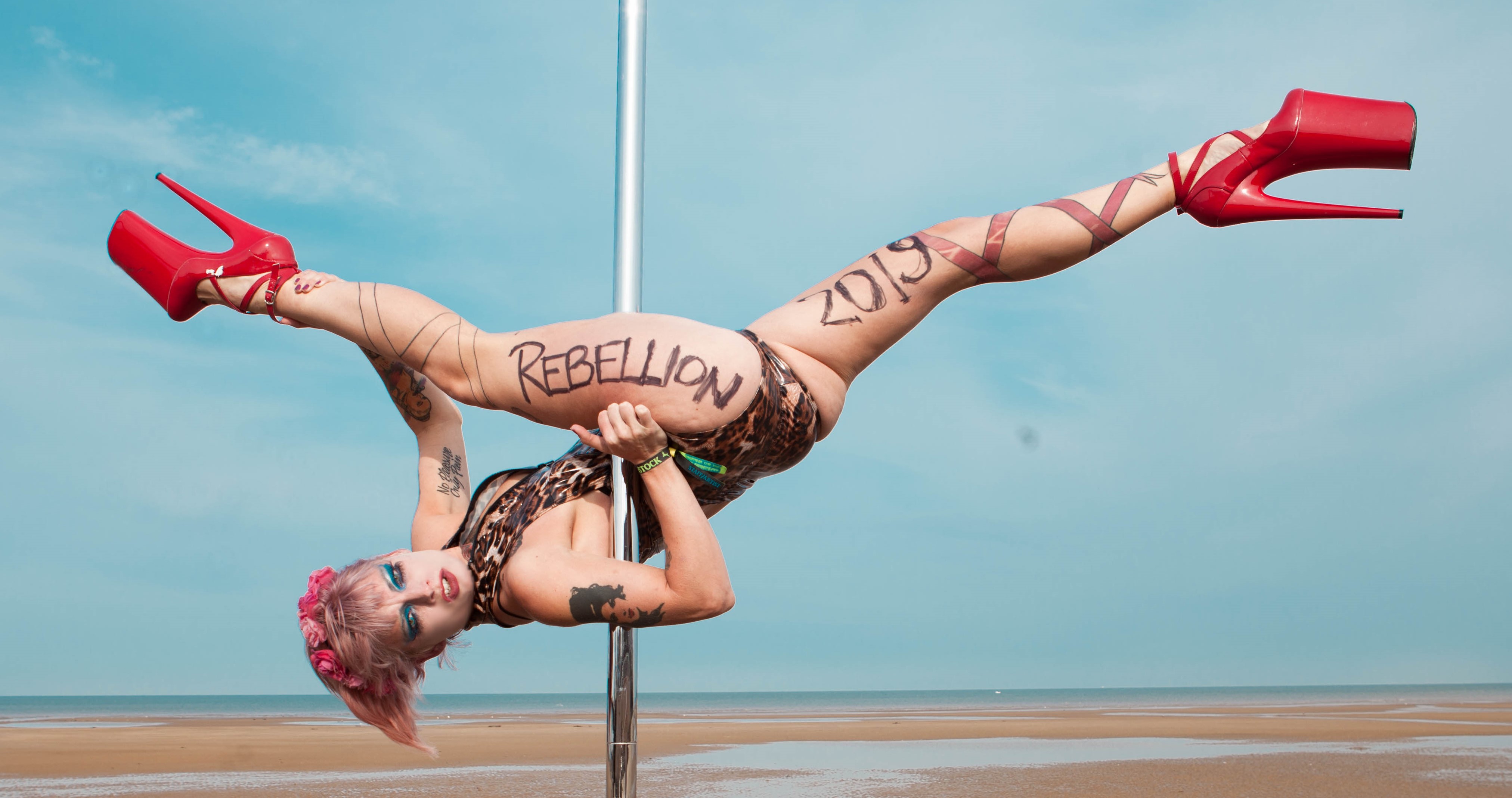 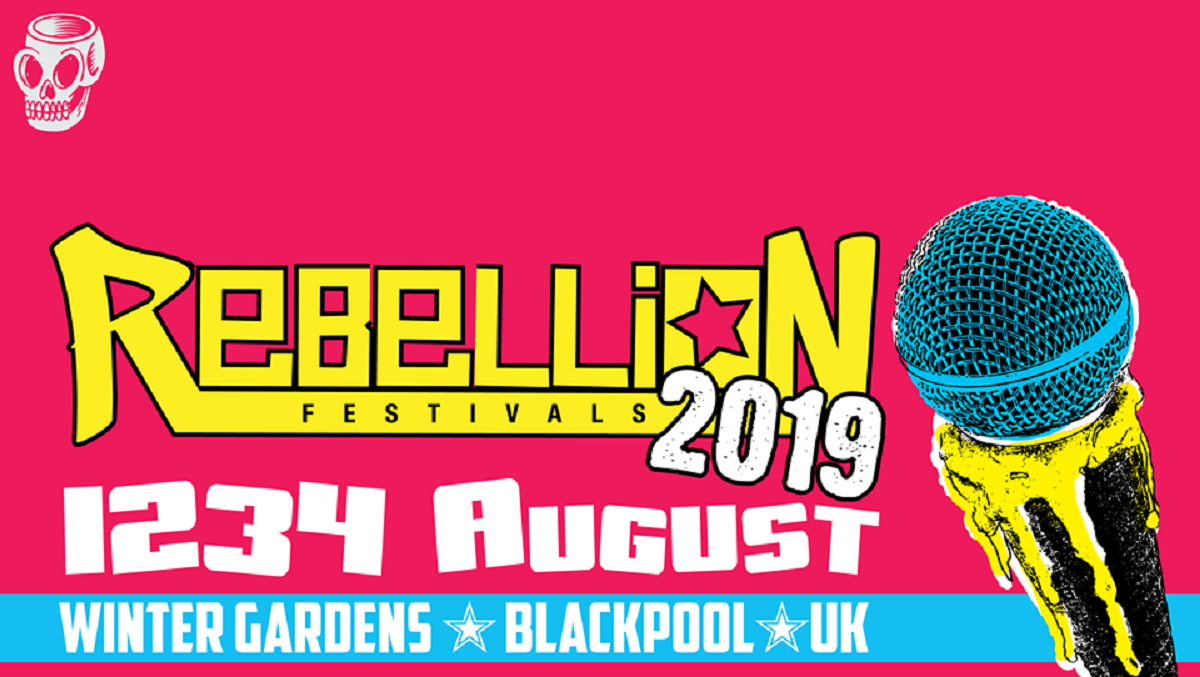 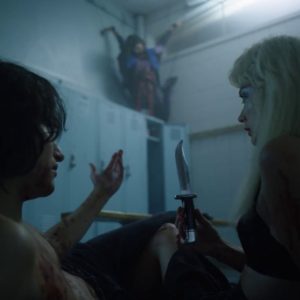 American Horror Story: 1984 - Episode 4: True Killers The spandex-clad edition of Cluedo continues with a number of predictable...
Copyright 2017 Devolution Magazine. All Right Reserved.
Back to top