It’s been nearly 23 years since Darren and Jennie Russell-Smith put on their first festival then called Holidays In The Sun.  From those early steps the festival has had a name change, to Rebellion, and a location change, from Morecambe to Blackpool. It’s also become the world’s biggest and best known punk gathering. Devolution chatted to festival founder Jennie and takes a look at what fans can expect this year.

Rebellion has come such a long way in those two decades or so. The town of Blackpool has welcomed the annual punk invasion with open arms developing a truly symbiotic relationship with a music community many might have had great reservations about. With the Winter Gardens playing host to an event spread across seven stages and lasting four full days it’s a herculean task to get everything organised.  And this is a festival that prides itself on not having any corporate big money backing.

Jennie: “It’s been 23 years.  We never thought it would last this long or that it would grow to become so big. Myself and Darren still love doing it. If anything we have more hunger for it now than we ever had have, we love it that much. Blackpool is used to dealing with hen nights and stag dos so they’re used to people coming to have a good time. They’ve found that punks are generally decent and well behaved people so they are happy to have us.”

This year sees The Descendents, The Damned, Cock Sparrer and The Stranglers taking top billing on each of the evenings. There’s a huge amount of love for the veteran acts but as the recent very sad loss of Pete Shelley of the Buzzcocks has demonstrated, no one will be around forever. So there is a real need to see who is coming through.  Fortunately it looks like the well is far from dry.

Jennie: “There are so many great bands coming through.  Shvpes and Idles are both doing really well. We love seeing the new younger bands doing so well and there’s so much talent out there at the moment.”

There’s a real emphasis at Rebellion on encouraging new young acts. The festival runs an introducing stage (the RIS stage) for the whole of the festival and it’s here that you can find bands that could end up as headliners of the future. One feature of the RIS stage is that some acts are selected to come back and play one of the other stages the following year. A few cement their place at Rebellion as regulars. Bands being promoted up from playing the RIS this year include Pretty Addicted, Migrana Social and Diablofurs while those appearing for the very first time include Tokyo Taboo, Petty Phase and the wonderfully named Cockwomble. 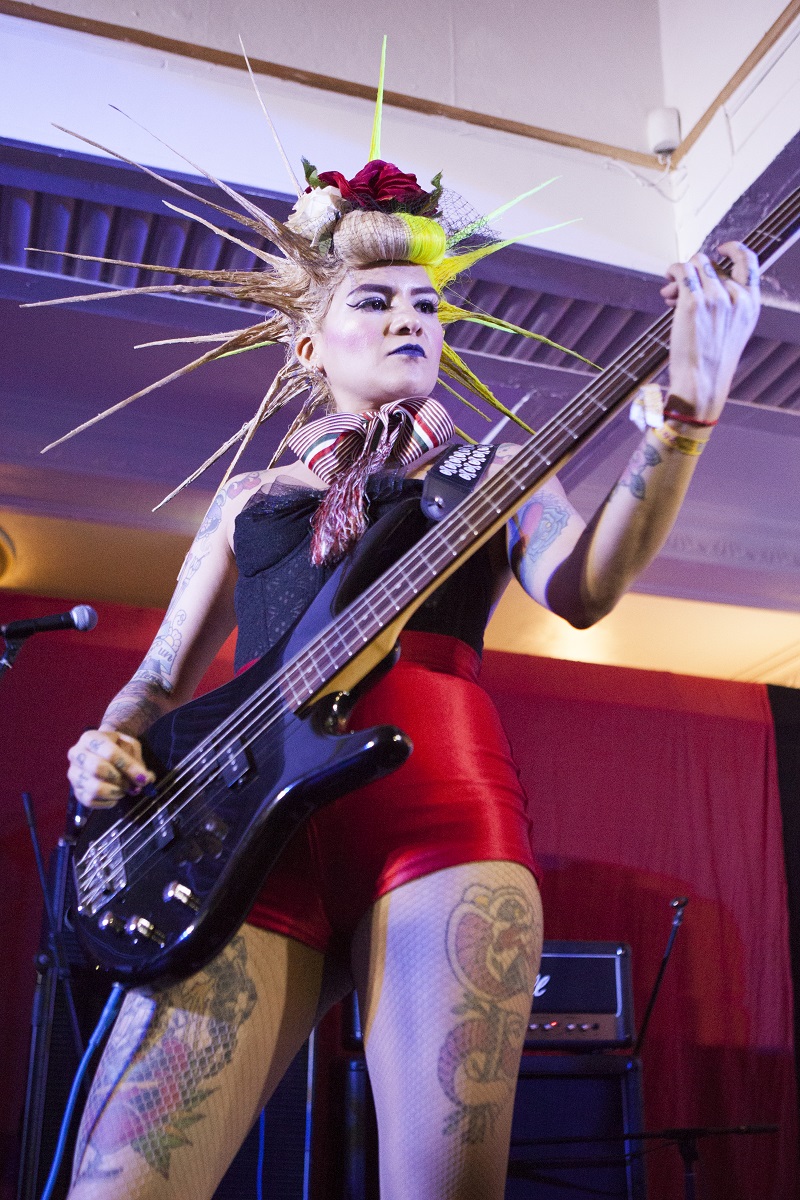 Jennie: “Jonny ( RIS booker) is out all year watching bands and we also listen to what the fans are saying. So we can go and check out suggestions. There are some wonderful bands from all around the world. The scene is very healthy at the moment. There is such a diversity in the music they play too which is important.”

While the selection process for booking bands is made purely on merit it’s very noticeable that female artists feature more heavily at Rebellion than at pretty much any other  music festival of any genre.  The inclusiveness and natural gender equality of the punk ethic has found its way into the booking process in the most organic of ways.

Jennie: “There are a huge number of very talented women musicians out there and they are getting booked on merit. We have always been keen to support female artists and the punk community is very supportive.”

Billed as a punk festival Rebellion has an astonishing level of diversity  from the more traditional sounds you’d expect to acts more closely related to grunge, rock and even electronica. It must be one of the only places a cricket themed Oi band, Geoffrey Oicott, can be found alongside the grunge of Hands Off Gretel and the pop rock of Queen Zee. Almost every corner of the planet is represented too, this is a truly international event that has moved with the times.  There’s even an acoustic stage where you can chill out to live music.

Jennie: “I think its core is still the same but it has developed and changed with the years. It is more diverse now. The people on the scene are tolerant and friendly which is what is at its heart. I’m not really sure punk has even reached its peak yet. I love to think it’ll be around for a very long time to come.” 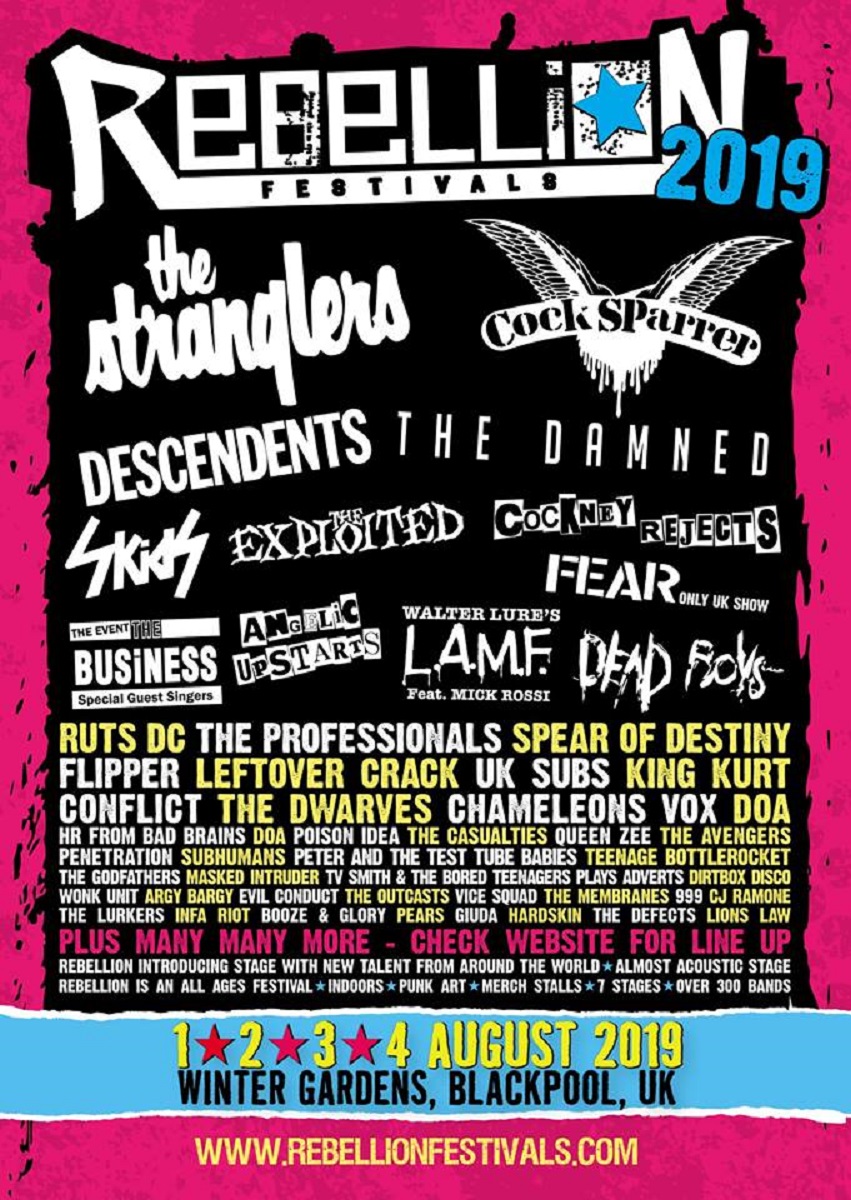 You’ll find all ages at the Winter Gardens in early August. The overriding feeling you get at Rebellion Festival is a sense of family. This is a celebration of not just music but a way of life, and a way to live life.

Thank you Jennie and Darren We have been coming to Rebellion for 13 years this year. Have seen amazing bands old and new and met loads of people who we now count as good friends Everyone involved including the Door Staff and Bar Staff are brilliant Where else can you watch your heroes on stage and then have a drink in the bar with them

Love it all Can’t wait for August 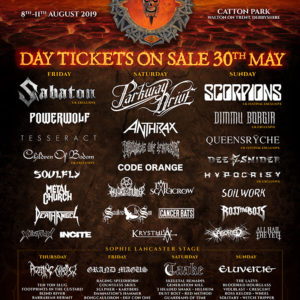