Tonight is a special night for LA rockers Palaye Royale. The last two years have been tumultuous in terms of tour dates with rescheduling and cancellations a plenty – but now they are finally able to hit UK shores again with their heady brand of rock and roll because, for all its influences, that is what it is at it’s core – pure unadulterated rock and roll!!

First on the bill tonight re -uniting with the band since their last tour with them in early 2020 are Charming Liars. The audience welcome them enthusiastically, throughout their set the energy from the crowd is pretty high, everyone is so happy to be here tonight after what feels like an eternity . Front man Kiliyan Maguire is a passionate performer his vocal has great depth which was backed up by sharp harmonies and intricate guitar work. They bring a set list of uplifting tunes often bursting into anthemic chorus’ which are well thought out and all of the band are fully animated and lively performers.  No doubt many people here tonight are discovering the band for the first time as is par for the course for support acts and looking around they certainly had a positive effect. Dynamically there was plenty of movement and interaction between them all and that extended out to the crowd. I would definitely recommend catching them live – you wont regret it! 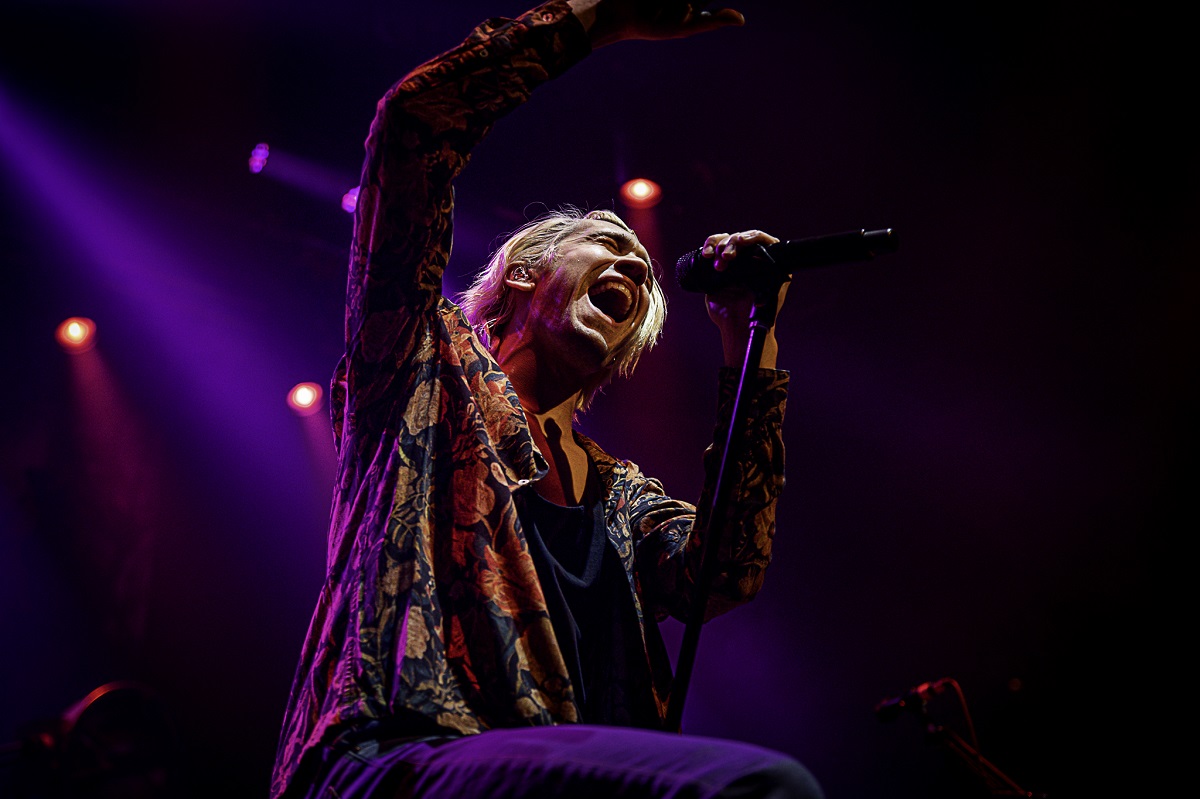 Next up an exciting addition to the line up particularly for Palaye’s guitarist Sebastian Danzig who cites him as a huge inspiration and idol – none other than the Libertines front man Carl Barat. The feeling it would seem is mutual as well, posting on his instagram he says of the band,

” a pleasure to meet such a genuine band, with real grace and panache. Everything they do is home grown and DIY , proper punk ethos”

The crowd welcome him with excited cheers and fully embrace his brand of rock and roll, they play a lively set and keep the mood in the room at a fervent level of enthusiasm. They are a good fit for the evening , authentic and really tight as a band. Hits such as ‘Bang Bang you’re Dead’ and ‘Glory days’ are particularly popular and elicit a raise in hands and voices, the whole mood in the room is joyous tonight. A great show from Carl and band, really enjoyable. 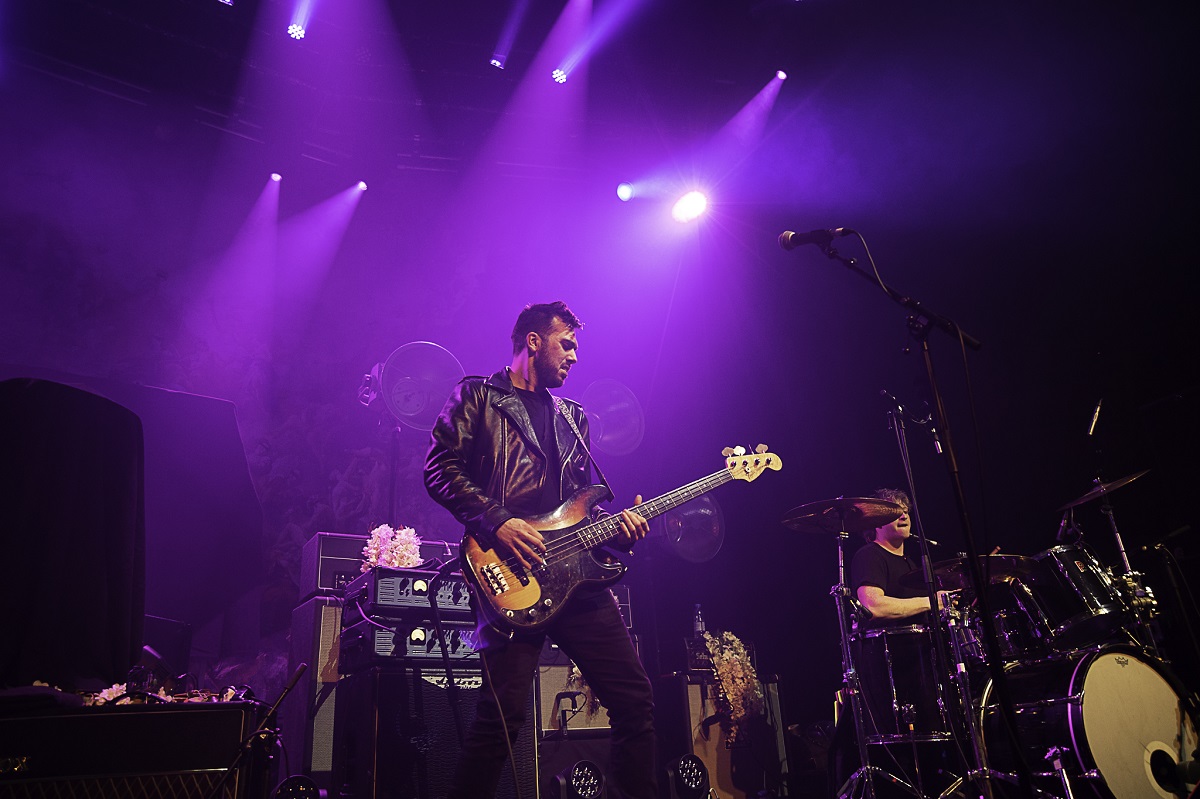 As I stand in the side lines waiting to enter the photo pit for the third time this evening my heart is pounding , I am no stranger to a photo pit of course but this one hits different, its special. I am not here purely as a photographer tonight I am here as a die hard fan of the band and I’d be lying if I said I wasn’t feeling the pressure to do them proud. Just a few short years from their sold out show at the humble Camden Assembly , and after that their sold out show at Shepherds Bush Empire in February 2020 – the last time I saw them, they come here to their biggest headline show in the UK a sold out Roundhouse holding over 3000 extremely passionate fans. The ‘Soldiers of the Royal Council’ are out in force , the band have been sorely missed and tonight we are ready. If you listen carefully you can hear 3000 hearts pounding in anticipation as brothers Sebastian and Emerson appear through the shadows and smoke to riotous applause and screams shortly followed by guitarist Andrew Berkeley Martin and newest addition Bassist Jennie Vee whose past collaborations include Courtney Love, Echo and the Bunnymen, and The Manic Street Preachers. They build into opening track ‘Nightmares’ from their third studio album released right at the beginning of the pandemic ‘The Bastards’ and as front man Remington Leith, the third brother in the band, makes his long awaited entrance the room erupts into the purest most joyous sound of singing , screaming and crying – it’s magical.

I am hesitant to say front man in this instance as every member of the band is alive and kicking. It’s hard to know where to look for fear of missing something as every moment is turned up to 11 it’s a complete visual feast. Remington is dressed head to toe in a pinstripe wide legged suit and leather harness his make up a nod to the glam rock aspect of their sound every inch the rock star. Drummer Emerson a dandy gentleman in top hat and velvet lapelled suit jacket complete with pearls Sebastian as always in a beautifully tailored suit. Then you have Andrew Berkeley Martin who I am convinced they have somehow summoned straight from the 70’s , all scarves and spandex and hair, his energy on stage is a whole vibe , interacting wonderfully with Jennie Vee who has mad skills but just makes it look all so cool and effortless. Its really not hard to see why there is such an electricity in the air around this band  the trajectory they are on is about to absolutely sky rocket you can just feel it!! Their love for their fans further adds to the atmosphere here tonight , their affection is clearly genuine and very heart felt and they are tuned in too – only half way into their second track ‘You’ll be fine’ a young girl needs to be pulled from the crowd , they stop the show , ensure she has water and check everyone else is doing ok before starting the track over and carrying on with the show. Its exciting to witness a band with such authenticity and raw talent, Remington performs with such passion and flair  he is an unstoppable force as he moves around the stage and later as he takes a sprint around the venue’s balcony levels stopping to hug a few fans briefly, making sure everyone is fully immersed and gets the full experience. They are humble too, Sebastian takes a moment to reflect on their journey from that small show at the Camden Assembly to here and now thanking everyone in attendance for helping them to get where they are.

There are plenty more poignant moments , Remington calls for everyone’s lights to be raised and as the stage lights bathe him in blue there is a sea of swaying phone lights for ‘Dying in a Hot Tub’ from 2018 release Boom Boom Room (Side B) and there isn’t a single person not singing along. Hit after hit is received with equal love and enthusiasm from the adoring fans before them including a brilliant rendition of My Chemical Romances ‘Teenagers’ which has the entire room jumping – ordinarily I am not always a fan of covers but the fit is so perfect for them it’s not at all out of place and it is wonderfully executed. They say their thank you’s including Remington shouting out to his mother who is with them on this UK run and is very loved amongst fans. He thanks her for being the one person who believed in him , letting him wear make up and dress how he wanted – I think I speak for everyone in the room and the fandom when I say thank you too!

When they leave the stage its clear no one is going anywhere – two years of waiting and we want more! The lights are directed to the back of the room and a spotlight illuminates Remington sat at a piano as the beautiful melancholy notes of ‘Lonely’ drift through the air. It’s a perfect stripped back moment after the wonderful chaos where everyone can fully drink it in. We are treated to a verse before he takes to the crowd to make his way back to the stage and his beautiful band. Ordinarily once the ‘curtain drops’ and the show comes to a close you leave on a sea of emotions happy to have been at the show, sad that you have to leave but there is yet more in store as the band have invited us to wait outside for one more wonderful surprise – closing down part of Camden in the process they appear and perform an acoustic rendition of fan favourite ‘Ma Cherie’ and then take time to speak to fans and take photos with them – just perfect! Big big things are coming for Palaye Royale this is only the beginning of what promises to be quite the journey for them it could well be quite the Fever Dream indeed! 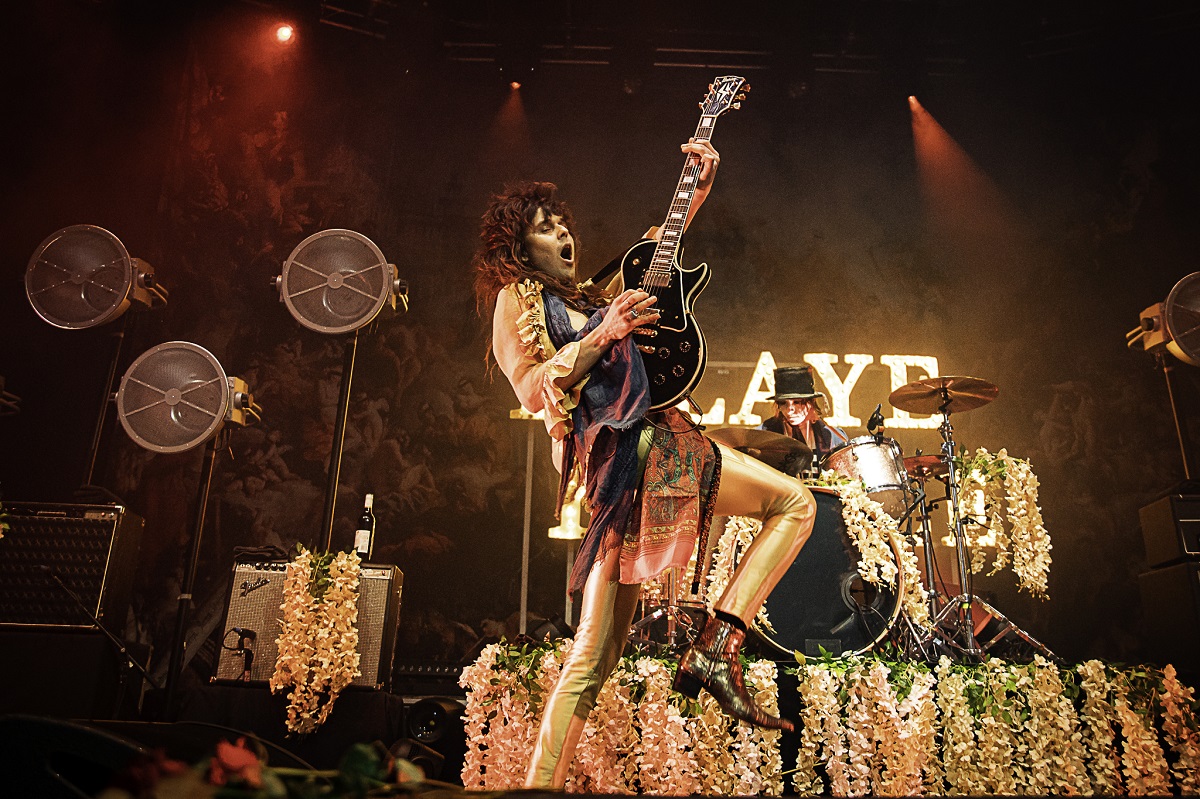 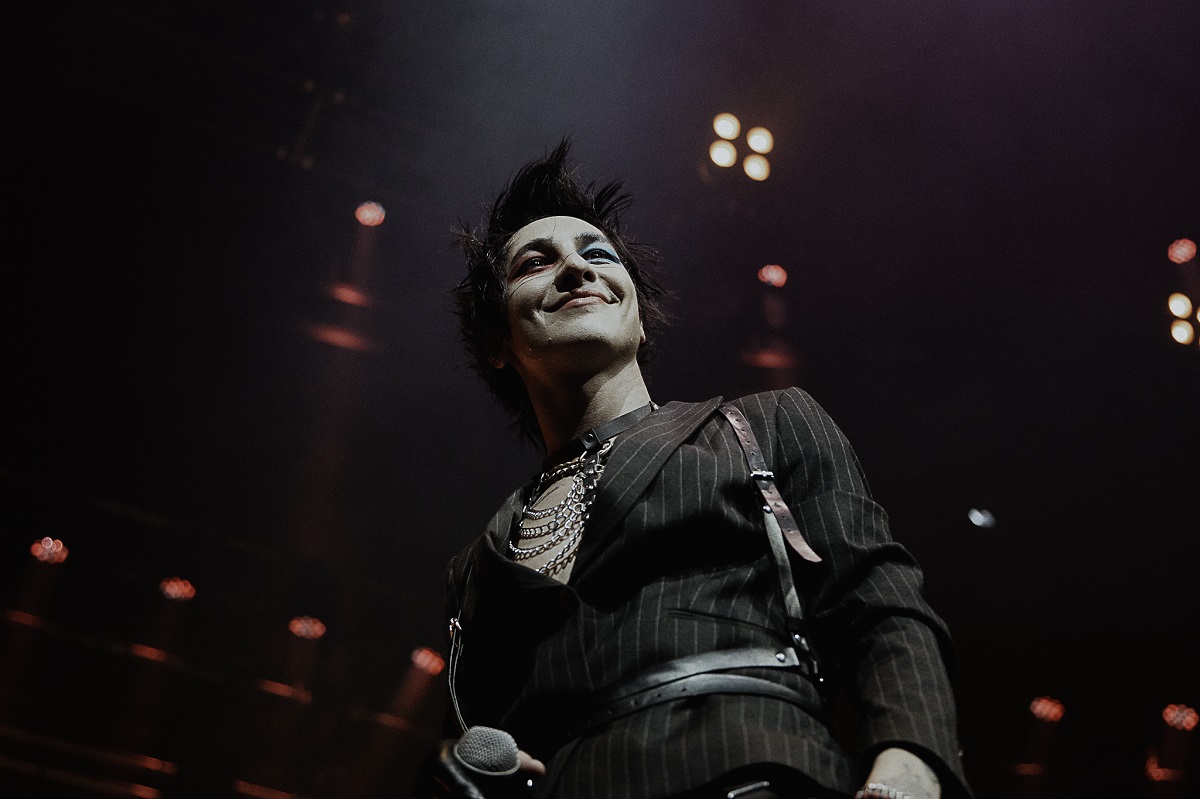 Review and photos by Rebecca Bush 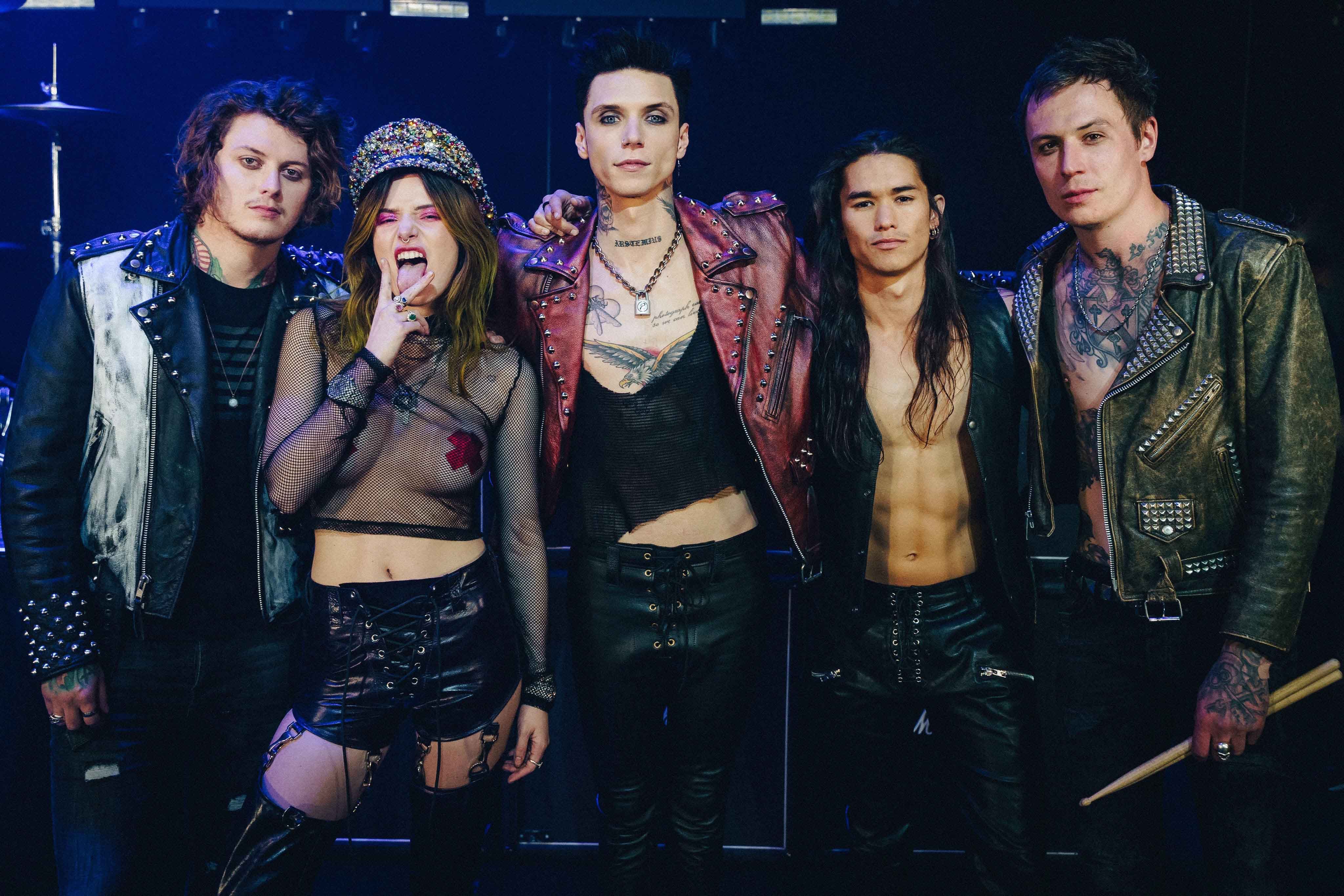 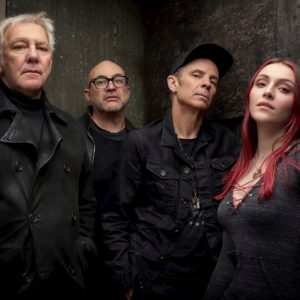 Envy Of None Envy Of None - Kscope Release Date: April 8th 2022 Over the years the band Rush survived crisis...
Copyright 2017 Devolution Magazine. All Right Reserved.
Back to top