When music is in your blood you find a way to make it happen. Lockdown, no problem, let’s go online and do some covers to show people a new side of me. That is exactly what Chloe Ozwell singer for metal maestros Sister Shotgun did. It turned out to be a smart move garnering her a lot of support while helping to keep the spotlight on the band too. Chloe chatted to Gary Trueman about working on new material, singing covers during lockdown and vibing Jessica Rabbit. 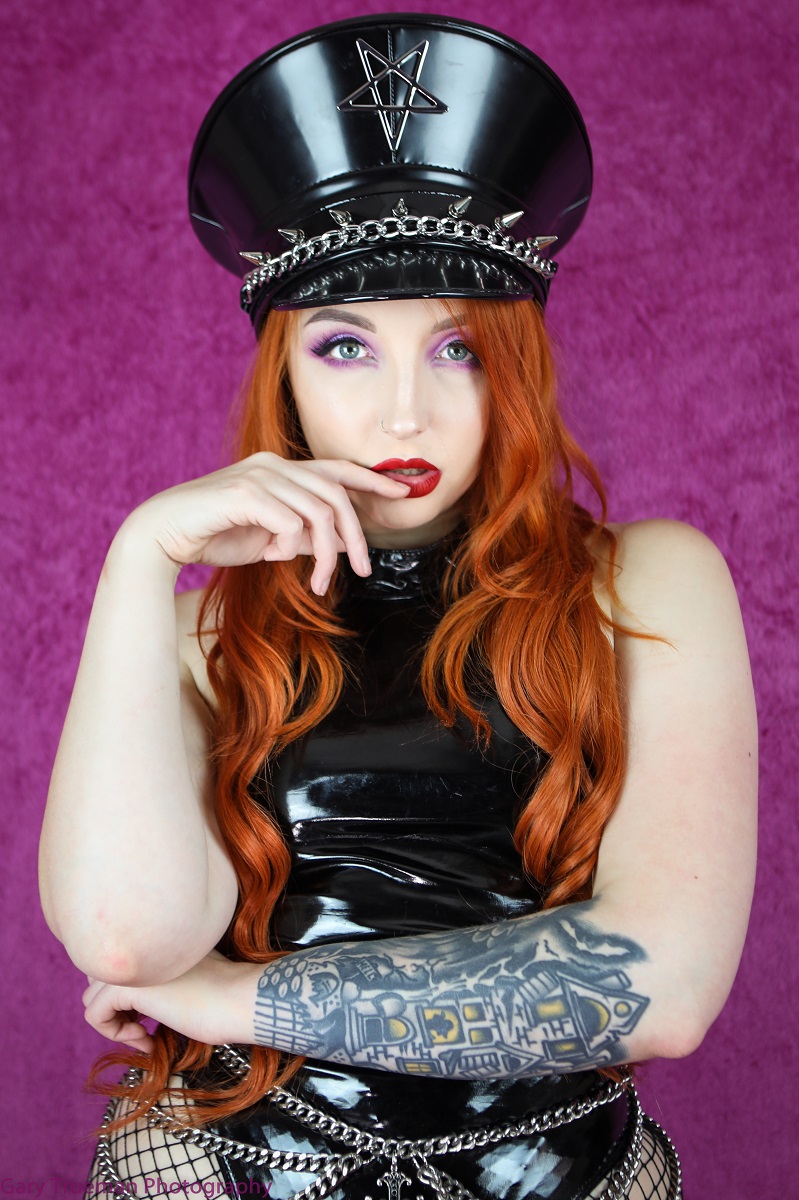 Firstly we ought to find out where Sister Shotgun are now after everything that’s happened in the last couple of years globally. Did the band take a bit of a break?

“We did. We did the whole cycle with the Fragments album which took us up to 2020 and then lockdown happened and no one could do anything any more. So we just kind of took a break from music in general. We had thought about putting together some demos together and we did a couple and then took a massive break and focussed on ourselves. I went off and did some covers and started putting those out. I started work on some solo stuff but I don’t know if it will ever see the light of day. Maybe at a later date but it won’t be out in the near future. We came back together around July this year and we had such a different energy and so ready to just push forward and do the next thing and be better than we ever have before. We’ve been working on the live stage show, we’ve been working on new demos and we’ve now got a manager too. We’re working with mister Ryan McCombs from Soil who has been amazing. I’ve known him for a good couple of years and we’ve got close. He’s worked wonders with us already and I can’t wait to see where that partnership goes. Everything is looking really exciting. We’re hoping to get back out on the road next year.”

You have a new bass player. So would you care to introduce him?

“We do, Mr Charlie Webster is going to be our new bass player. We’re very excited to have him. He was previously in a band called Gravel. He’s already brought great energy to the band and has become a real asset.”

You said you’d been working on some solo material. Was that just to keep your hand, and voice, in or was it something more to do with wanting to do music that wouldn’t necessarily fit with Sister Shotgun? Is it rock or more pop like?

“This is all Ryan’s fault actually. I started putting out the covers early on in lockdown. He’d seen what I’d posted on Facebook. He said he really loved the covers I’d put out and he’d been looking for something to do with his managing, to take on a new artist. He said my voice had blown him away and would I be interested in doing some solo stuff. I said I’d have to consult the boys but I was interested. I decided to go ahead and the original idea was to go a bit more country and I just wasn’t feeling it with the demos I was getting. It didn’t feel like me. So we thought lets try a more Avril Lavigne thing which is commercial but still has the rock guitars behind it. I ended up working with a song writer in the US and we did a demo together. It was super commercial but had the metal guitars in it and I thought this is it, this is the sound. The plan was to keep working with him and put more demos together but before I had a chance to do that Sister Shotgun came back and that’s where all my attention has been ever since. To me it didn’t make sense to carry on with the solo stuff once we’d got Sister Shotgun back on its feet. So it might resurface in a couple of years time, I’m not too sure. It might be something I revisit because I think we’ve got some cool stuff.”

It’s a case of focus as an artist then really, that you need to focus on one thing at a time and give that all your attention?

“Yes, absolutely. Especially with being in such a crucial stage with my career with Sister Shotgun it didn’t make sense to divide my focus between them and my solo stuff. I’d rather put everything into Sister Shotgun and building what will hopefully be a really successful couple of years for us. I’m hoping once the band has taken off and we’re on our feet I can revisit this as a fun little project just for me.” 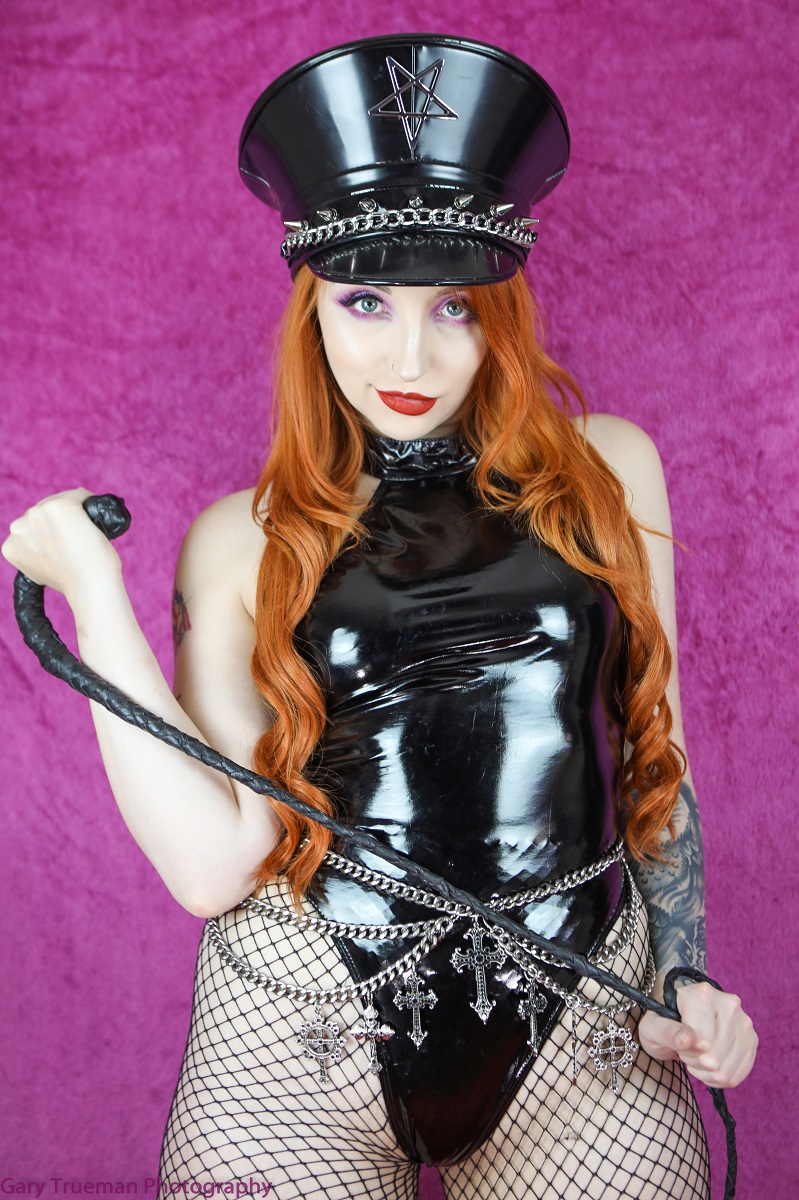 Where are you at the moment in terms of music with Sister Shotgun? Are you anywhere near recording new material?

“At the moment we’ve just recorded demos. We have finished songs but everything is just at the demo stage. We just want to make sure we’ve got some great material first and foremost. Once we’ve got the material down that we now we want to put out then we’ll get ourselves into a studio. Everyone says with your first album you’ve written your whole life, with your second album, that’s the difficult one because you don’t have any material to fall back on. We don’t have any previous material like we did with Fragments where we did take a few songs from one of our Eps. We don’t have that, we’re building everything from the ground up. That’s where we’re at. We’re trying to develop the sound a bit more so we’re probably going a little bit on the heavier side as far as the guitars go but all clean vocals still. We are trying to explore a slightly different sound which will be interesting. Hopefully it will appeal to a few more people. We’re just having a bit of fun at the moment.”

You mentioned clean vocals and you’ve been putting out the covers which have been going down a storm. On YouTube. Has that kept your voice healthy as well by making sure you were still singing?

“Yes. My worry was going into lockdown that being away from music for however long was going to hurt my voice in terms of keeping on top of exercising it. I didn’t know what would happen when I finally went back to singing live. So doing the covers was partially that and it was partially to relieve my own boredom. I knew I wouldn’t be doing music for a while and it’s really helped to keep my voice in shape.”

The covers you chose to do, are they representative of your own personal music taste or more what fits with your voice?

“I wanted people to see a completely different side of me and not be stuck in this metal box. I love heavy metal and always have but there is so much more to me as an artist and so much more that my voice can do. I just wanted to have fun and treat it as a bit of a karaoke session and do some songs that people wouldn’t expect. I did a couple of requests too. I did an Abba cover which I loved. I’ve done Evanescence, I did a Beyonce cover, I did Oasis, I did a really varied spectrum. I think it’s been great for people to see I’m not just a heavy metal vocalist. I started in classical and made my way through to musical theatre. I’ve done pop music and soul. I’ve done a bit of everything, it’s nice for people to see where I’ve come from.”

You say you’ve done a bit of everything, you also model too. That’s going well and you’ve recently done some test shots for a well known designer.

“Earlier in the year I was approached by a very well known British designer and I got the opportunity to go to London and shoot with the famous Andy Gotts which was incredible. It was one of those experiences you’ll never forget. So I’m just waiting to hear if I’ve been chosen for a campaign. Fingers crossed. I can’t name the designer though, I’m trying not to jinx anything.” 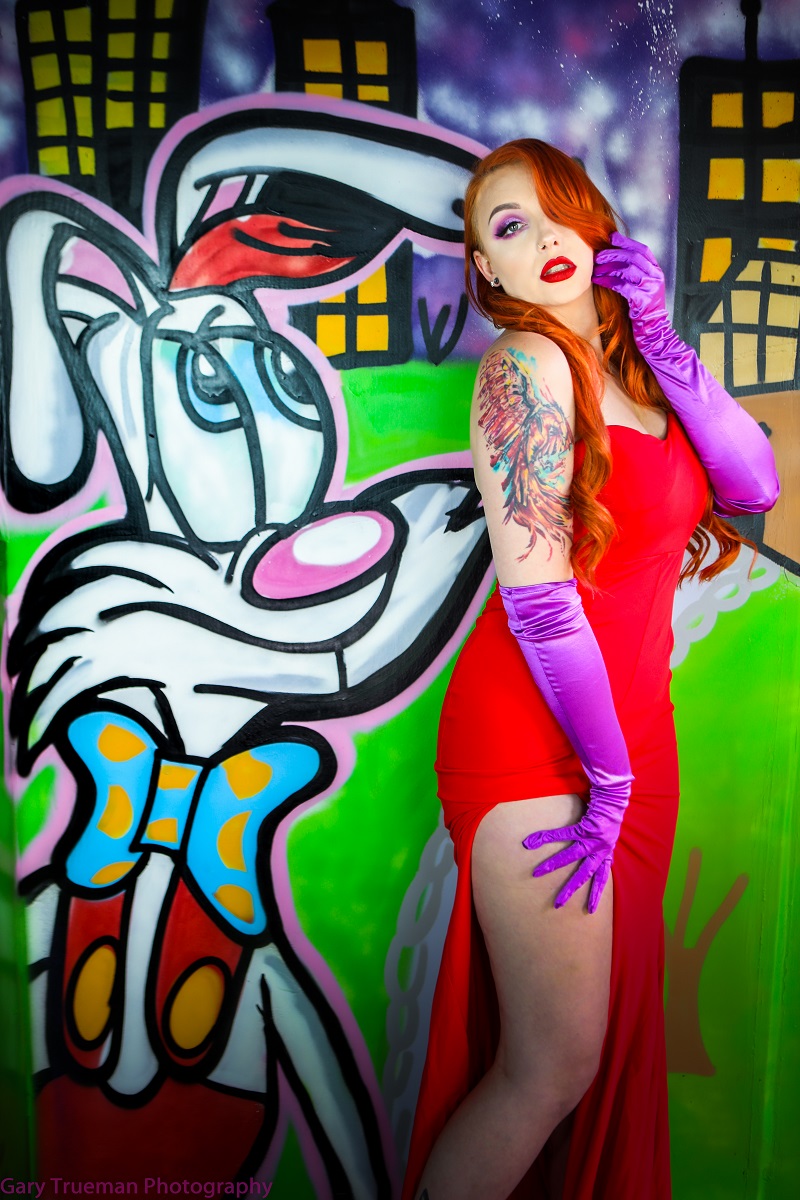 From the last time you came and shot with us and spoke with Devolution you’ve made over your image. In particular your hair, you’ve gone red which suits you fantastically well. Was that a conscious effort to put across a more mature look?

“It was, I kind of got to the point in my life where I was a little bit sick of portraying a younger image. I was 26 at this point. I’d thought of going red for a long time.  It was a case of do I do it, has the pink become too much of a signature? I was just looking at myself and thought I just need to make this change. I took the leap and I’ve not regretted the decision. I looked in the mirror and it looks like I was born to be a redhead. One of my icons is Jessica Rabbit too so I’m loving it.”

Which we can see in some of the photos. You do make for a fantastic Jessica Rabbit.  On a more personal note, people are often aware of how they’re viewed but how do you view yourself. So what do you think are your best and worst traits?

“I have always been very ambitious and very determined. I’m goal orientated. So whatever I go after I will work tirelessly to get. I’m a very hard worker. On the flip side of that I can also be very lazy. I’m a very messy person, my family will attest to this. But I’ve heard being messy is a creative thing so I don’t feel as bad about it. People sometimes need to kick my ass to get me to tidy up.”

Outside of music, and you probably don’t have much time free, is there anything you have as a kind of hobby, or anything you like doing?

“I’m a comic book collector. I’m a big DC fan. I have a stack of Harley Quinn and Suicide Squad comic books. I used to get a subscription so they’d come weekly. I love comics and graphic novels. One place I’d love to go and I’ve never been is Comic Con. I’ve never managed to do one and I’d love to nerd out at one. That’s kind of my hobby but my life is music.”

You love comics so if you could put Sister Shotgun together with each band member being played by a comic hero, pick a comic icon for yourself and the guys…

“I’d be Poison Ivy. Obviously red hair and a bit of a femme fatale. I love Benji, I feel like he’s got a bit of Deadpool energy about him. A little bit chaotic. Personality wise he is Deadpool. Dave our drummer would be the Hulk. Charlie is quiet and reserved but also the craziest dude you’ll ever meet. So for him I’m going to go with Ghost Rider. And Niall, I feel he’s Robin to my Batman. He’d kind of my side kick. 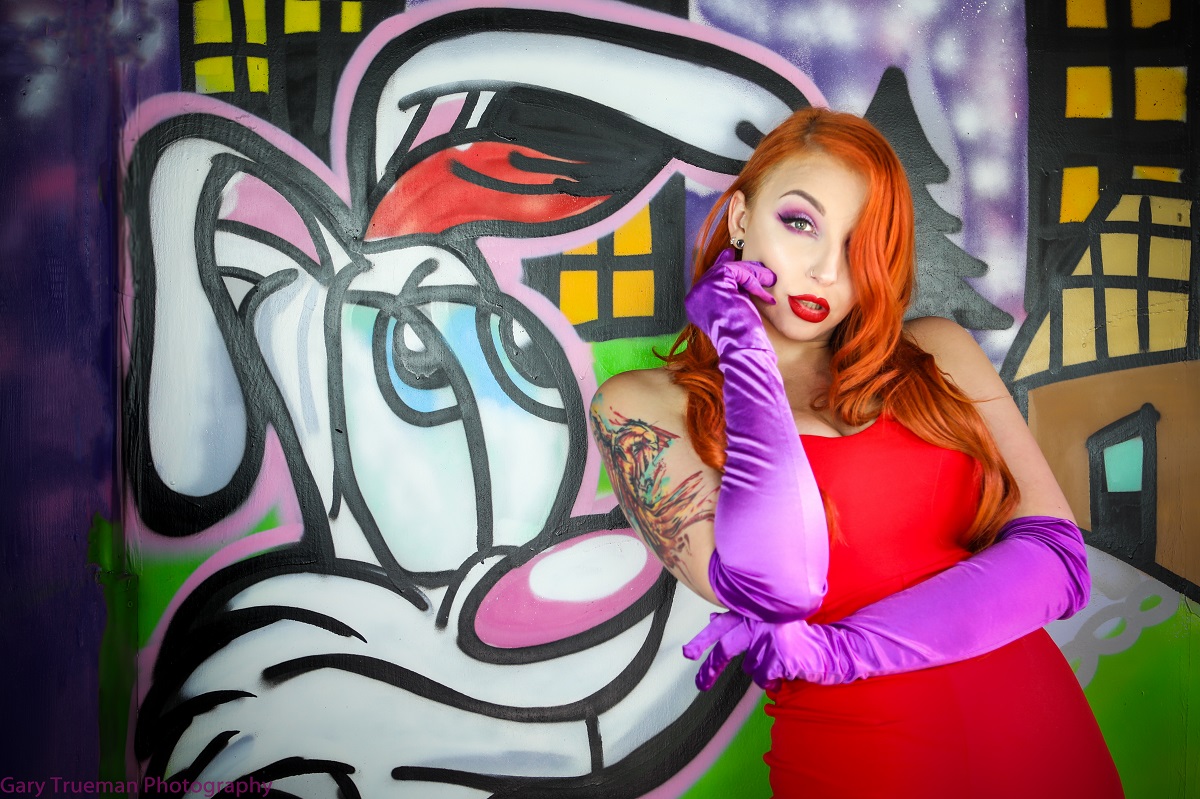 Interview and Photos by Gary Trueman 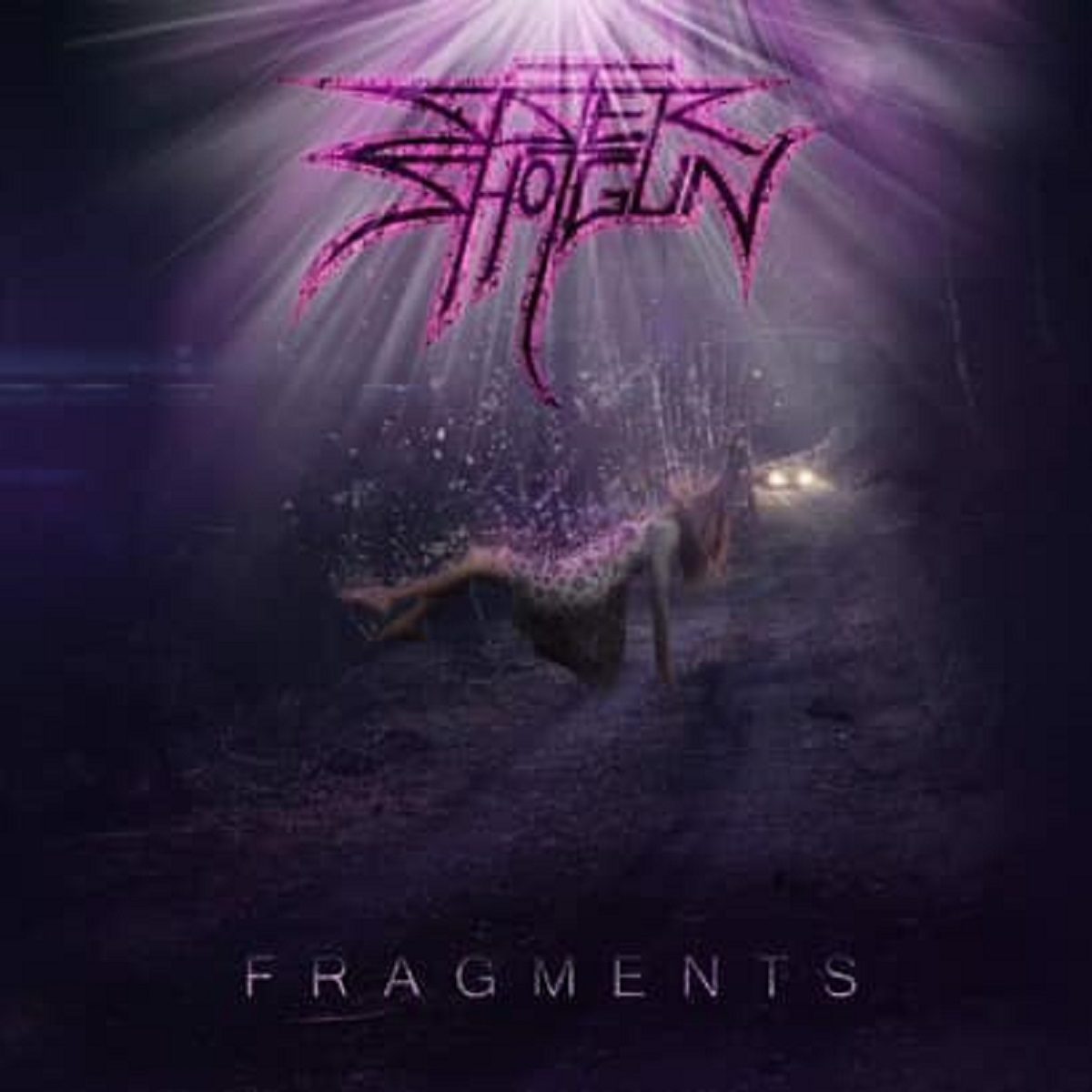 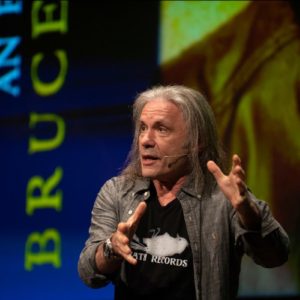