Interview: Scumbus “We’ve cut down a lot on just relying on swearing to make a point.”

Epitomising the DIY culture that is flourishing in the music scene right now are Peterborough based punks Scumbus. They may not be signed or have pots of money to throw around but they are real and they’re making quite a splash both locally and further afield.  Gary Trueman spoke to singer/guitarist Rob and Bass player and backing vocalist Ben about early influences and maturing as a band. Missing in action was drummer Paul thanks to a broken motorbike. 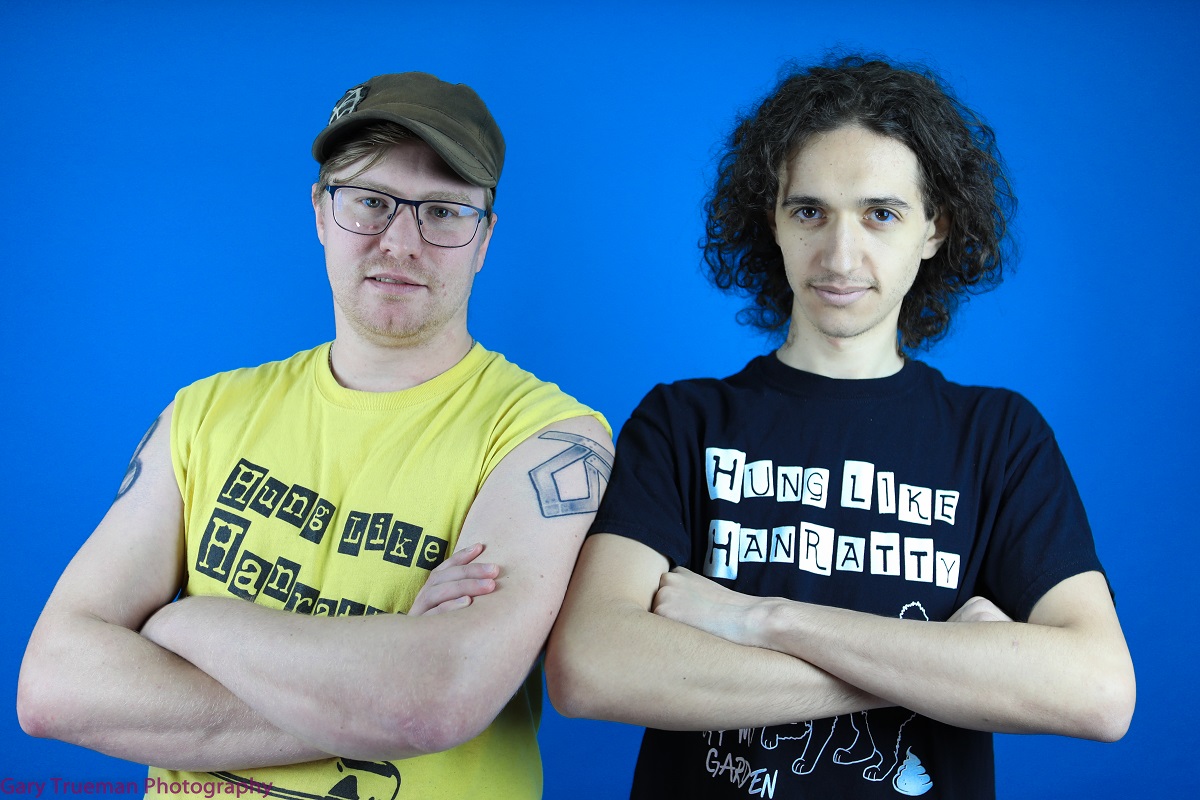 How long have the band been going and how did you get together?

Rob: “We’ve been going for just over five years but we were a band beforehand and just changed our name. So the length of time is a bit skewed. It was really our old bass player that pointed us in the punk direction. We are all metal oriented which you probably wouldn’t realise by listening to us.”

There seems to have been quite a lot of shuffling around but you’re a three piece now and you have your old drummer back who is somewhere at the side of the road with a broken bike. Is this a settled line up?

Rob: “I think so. I think if we have any more changes it might be that we’ll possibly get another lead guitarist in, but I don’t think it’s something we need to worry about.”

Ben: “We tried having a lead guitarist in before and it’s just adjusting. It makes it easier for Rob, but I think we’ll stay as a three piece for a little while.”

Three piece is almost a punk tradition in a way isn’t it, although a lot of bands are bigger?

Rob: “Yeah, it doesn’t mean I have to run around on stage and I can just stand over a mic all night too which is fine by me.”

You’ve released o few bits and pieces, you have a new single out called Drunk Again. Any new album or EP on the horizon?

Rob: “We’ve just released our Drunk Again/Shut Up single and that might lead to a possible album coming out hopefully August time next year if we can get around to recording it. That’s kind of where we’re at. Off the back of our 2016 release we want to change things up and take a slightly different direction. We want to show a bit more of our maturity musically.”

Ben: “We’ve cut down a lot on just relying on swearing to make a point.”

Rob: “There’s an awful lot of swearing in music where I feel bands try to use it as a shock tactic. It’s fair to say we were like that beforehand with our earlier stuff, there’s a lot of swearing in that. As you grow up as a band you learn to move away from it and show a bit of intelligence in your song writing.”

Do you think that’s a natural progression that a lot of bands and a lot of musicians go through, particularly those in the more alternative spectrum where you just want to get all your anger out, then you find better ways to do it?

Rob: “Sometimes, I wouldn’t say all the time. I think it can depend on what sub-genre you’re involved in. A lot of your hard core and punk there will always be swearing in it because that’s what they play off of. But when you’re alternative but softer, maybe that’s not the correct phrase…. when you’re more audible, then yes you will progress to that because you want people to listen to your music and understand the message you’re trying to convey.”

Do you think punk as a lifestyle has changed quite dramatically over the years to almost taking up the space where hippies were. Is punk the new hippy movement?

Rob: “Yes, absolutely. When I was six or seven my dad was having a massive influence on my music taste. So I grew up knowing all the 70s punk bands. Punk from what it was then to what it has become has become more of a hippy scene, an alternative hippy scene. I don’t think we fit into that hippy/punk bracket though.”

You recorded an album a while back. Are you going to change anything in terms of the recording process next time round?

Rob: “We go to a local studio which is where we practice. Full Circle is where we practice over in Peterborough, and there’s a studio there called The Den. That’s very much single instrument recording as you go along whereas our earlier album was kind of like a live studio recording which is way more comfortable, but your sound quality is worse. “

Is it quite an eye opener going from recording as a live unit to laying down each track individually?

Rob: “It’s definitely an uncomfortable feeling. When you’re so used to practicing or playing on stage and everyone else being there and then you go to playing the individual instruments like two guitar parts, you’re so aware of the tiniest mistakes.  On stage you can’t really fix it and you don’t really worry about it because the timing is still relatively OK. If you then  start to record to a click it makes you aware of how badly you do actually play. Polishing yourself up can be such a big issue. The positive is it does make you a better musician. But you have to pay a lot of money to become better that way, haha.”

You said earlier that you started out as more of a metal band. Who were your very first influences when you first picked up an instrument?

Rob: “The main reason I started playing music was that I’m quite a big Megadeth fan, so to go from them to the type of punk we do is quite a leap.  I used to practice that stuff all the time and I think it’s actually made me lazier going in to punk rock. I can’t play half the stuff I used to be able to play. A lot of my really early influences you’ll see from my tattoos, I’ve got Saxon and Twisted Sister on my arms.”

Ben: “I got really into Pantera and still know most of the songs, I can still play a lot of them. I’m also into other genres as well and use that to practice to improve as a musician.  I’ve still got a long way to go though.”

If you could choose an artist living or dead to share the stage with who would it be?

Rob: “That’s a big question. If we’re talking vocally it would have to be Dio. He was awesome.

Ben: “I’d probably want to share the stage with Dave Mustaine. A lot of my influence as a bass player came from Megadeth, but it also came from his singing and I think he would be a great person to play with, so long as I don’t mess up and he fires me.” 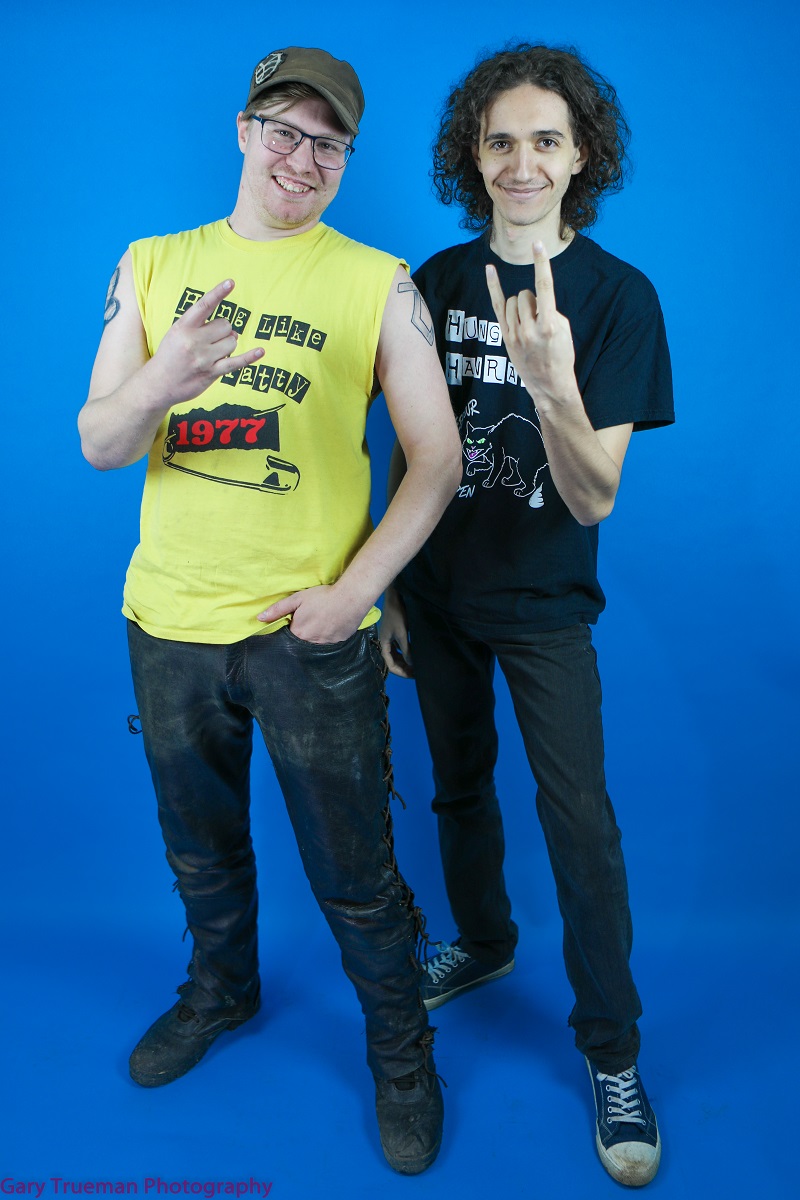 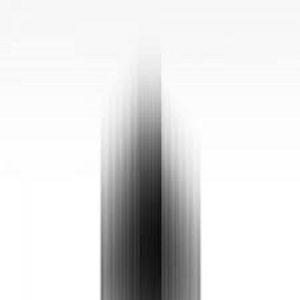