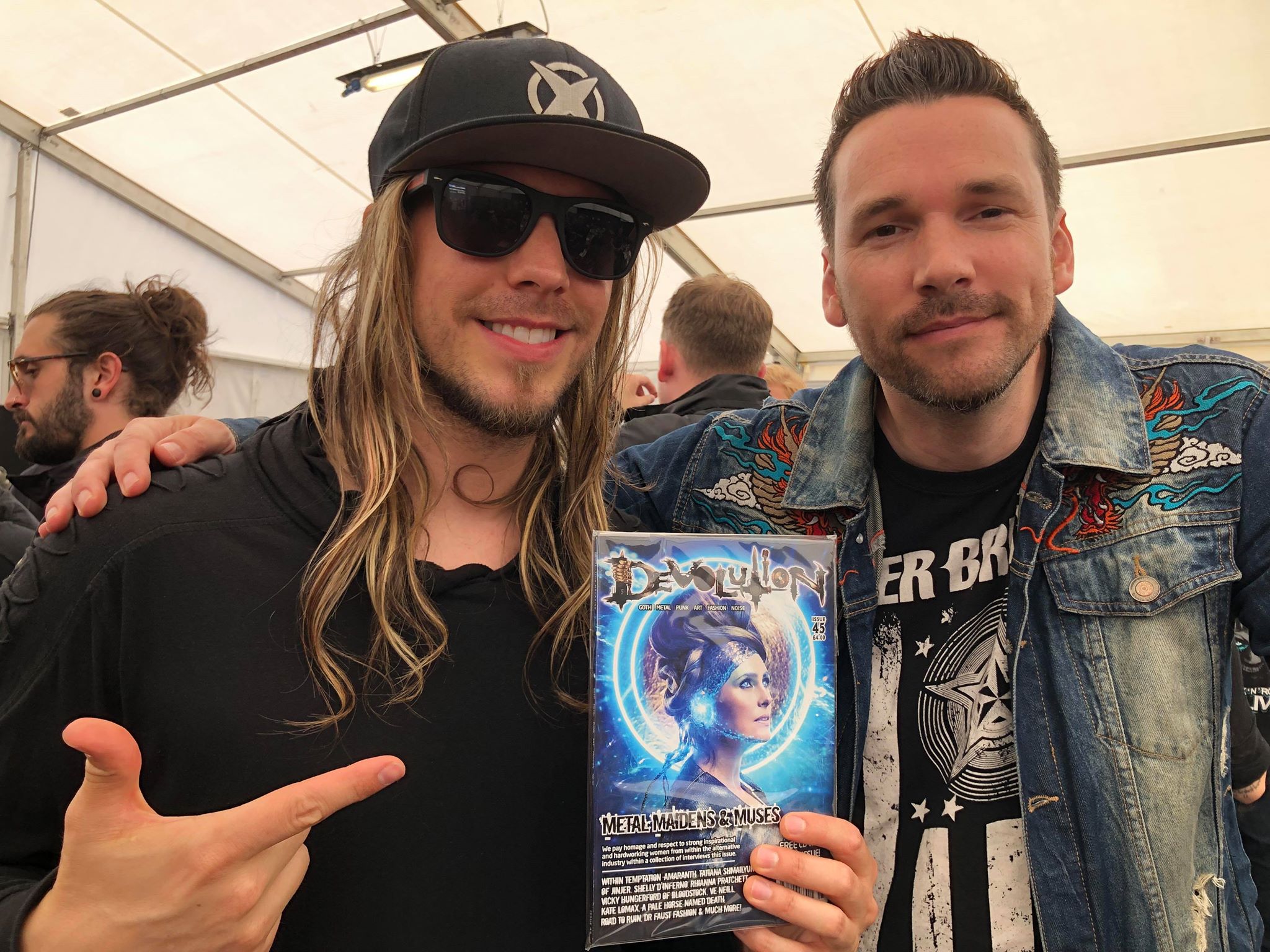 Brothers Matt and Kent from Like a Storm discuss their life on tour and how they relax when not on tour with Mark Bestford. They may have found the local cathedral and Castle Donington, but will they ever find Donington Castle itself?

You guys are originally from Auckland, New Zealand

The whole thing, with moving to the US, how much has that influenced the music that you’re playing?

K “We always grew up in New Zealand with a 50:50 influence of American music and English music. And the English music we took influences from it was the classics, it was the Beatles, Queen, stuff like that. Then later Britpop, Oasis, just in terms of the melody and stuff like that, Prodigy. And then from the US, Metallica, Foo Fighters, and so it’s awesome for us to go to both places, because quite often American bands come from an American mindset and British bands will come from a British mindset. But New Zealand being where it is we got both cultures musically.”

So the last album came out a year ago

Do you have anything else in the pipeline yet?

K “Yeah, we’re always writing. We just had a month off in New Zealand where we were working on a bunch of ideas. But we kinda need to slow down on the touring to be able to get into the studio and do it. We were over here with Godsmack earlier, and then we were in Japan and now we’re back here and then we’re doing five weeks in the US so maybe when it slows down a little bit.”

So probably something more for 2020 then?

M “That’s the thing about touring the world is that it kinda takes up your time so we’ve got a bunch, we’re always writing new songs, but you’ve got to take the time to make that new record. But for now we’re just enjoying touring the album we have.”

I suppose it’s good that writing while touring as well, that when you do get into the studio you’ve already got something there to start off with

K “Yeah, when we first started touring we could see two kinds of bands we were opening for. And one kind of band was never writing, and one kind was always writing, and so we kind of learnt early on that you kind of want to keep those chops up, so we’ll always be writing, tinkering away with ideas and then that way, these days with the technology of phones, laptops, you can put ideas down, that way when you get into the studio you’re not starting cold you know. You have a vision already.”

When you finally get into the studio is it the whole band in the studio or do you all kind of do your own thing?

K “The last record we were in different countries even. I did my bass in Toronto where I live, I flew out to LA where Zac lives and did the drums, and then these guys just moved to Vegas, so they did their parts in Vegas. And then the guy mixed it in Boston so you know.”

M “Yeah it’s the miracle of technology you know, you used to all have to be in the same room, and we, Kent, Chris, and I, all right songs and we write that way often. And this is the first time that we’ve made a record that way too, we actually tracked different parts in different countries, different cities within the US and then it was all mixed in a different place again. But thanks to technology you no longer have to be in the same place and so it really opens up the possibilities of what we can do moving forward.”

You’re quite famous for having some really weird instruments on the album, you’ve got didgeridoo, you’ve got organ, anything you want to add to that repertoire yet?

M “Yeah, there’ll be a few new tricks on the next album. We always grew up, Kent was talking about the Prodigy, we grew up really being into artists that pushed the envelope, and you never really knew what they were going to do next, so that always been part of what we love about having our own band and writing our own music. So there will definitely be some things on the next record that people won’t be expecting.”

What hobby do you enjoy doing most when not playing music?

K “I like to draw, and also Basketball is my main sport. I always loved playing basketball and then I realised that I wasn’t very good at it so when I was in my teenage years I got turned onto music, playing drums and then guitar and stuff. So those would be my two hobbies. I live in an apartment block that has a basketball court, so I’m either down there, or drawing or painting.”

M “I got into running quite recently…”

K “From the police”

M “Yeah, actually out of necessity. But I got into running, I always hated running, never like it as a kid, but it has a kind of meditative quality to it. So I’ve started doing it now, especially when we’re not on tour, and so it’s amazing.”

K “He still runs on tour, we don’t let him on the tour bus, we make him run from city to city.”

M “It is. Especially when you’re travelling a lot. This year we’ve been to, well we’ve literally been right around the world and north and south too. So just being healthy and exercising helps you stay fit and helps keep you mentally, you know, on the level. But running, I always hated it, but now I love it because it’s like meditating and you’re getting fit at the same time. And it helps man, you turn up to play a summer festival you want to be in shape.”

And while you’re on tour, how do you relax?

K “We have the Xbox on the bus, and we were playing NBA 2K, but I think that got less relaxing than a show day, it started getting a bit competitive so we had to kind of phase it out, people were taking it a bit too seriously.”

M “Yeah, very competitive, I actually had to stop myself from playing it, because being on tour is awesome but you want your downtime to be downtime you know. And we’d be playing these games and at the end of it you’d be like ‘Fuck!’ and then you’re like hang on, this is my fun time. So now I read.”

K “And over here we go and check out all the sights because coming from New Zealand we’re just touring in general, we’re so lucky to get to do it, but you don’t take it for granted. You go to these places, Bulgaria, Finland, London, and you might never get to come back, so we usually go to check out the historical sights.”

Any highlights from the places you’ve visited?

M “Dude, last time we played Download we went up to the cathedral on the hill and we found an old tombstone with Brookes on it, which is our last name. And we have a lot of family in Coventry, we have family in the Midlands so we may very well have found the tombstone of one of our ancestors. So that was pretty cool.”

K “And then that church was from the eighth century or something. You don’t get stuff like that in New Zealand.”
M “We actually thought we’d found the castle, Donington Castle. It’s our third time here and we still haven’t seen it.”

K “We thought this is a little bit small for a castle.”

M “But we did find the cathedral, so that was pretty cool.”

K “Catacombs, yeah we put everything we had into this one, you know. We tried to push it musically, push it lyrically, push it melodically, push the arrangements, push it sonically, and we’re just really happy with the way it came out. We took a lot of time to make it. A year and a half was about the normal length of time to make an album but these days you’re just expected to pump them out, but we still wanted to… We did a tour with Alter Bridge and Gojira in 2016 and then started up again in 2018 and we spent all that time working on the record. It’s some of the heaviest stuff we’ve done, which for us was reverting back to earlier bands, early Metallica, Korn’s first record, those were a lot of influences for us. And then tried to push the musicality you know, the drumming, the riffs, the layers, the way it goes. What do you want to add to that?”

M “I was just thinking you’re doing such a great job, makes me want to go and buy the record. I mean one of the things that we had in the front of our minds when we made Catacombs was that we wanted it to be music that was fun to play live. And so one of the most fun things for us has been the last year touring the world playing these songs. And today we got to play them on, you know, on one of the main stages here, and it’s amazing I guess to write the music with that in mind and then it’s kind of like realising a vision. You get to be on stage playing it. So it’s been a really fun record to play live and I think it’s just been awesome to tour so much and play this music for people.”

K “We’ll put out some new music next year. We’ll probably record at the end of this year and release it next year. And then we want to come back everywhere. This year we’ve gone all round Europe, all round the UK, all round the US. To Japan. We’ll probably get down to New Zealand and Australia by the end of the year, to Canada. And that’s why we do this you know, I’ve got friends back home and they’re like man that sounds exhausting. But I say to them, you don’t get it, this isn’t like a normal job, we’re not travelling to go to business conventions or whatever, we get to do this every single night.  So that’s what we want to do next year, and every year.”

M “Long may it last, and who know, we keep coming back to Download, we may eventually find Donington Castle. Like twenty times and then or something.” 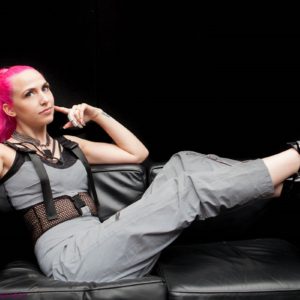 Mark Bestford chatted to Ariel and Shawn from Icon For Hire and discussed the benefits of being an independent artist...
Copyright 2017 Devolution Magazine. All Right Reserved.
Back to top