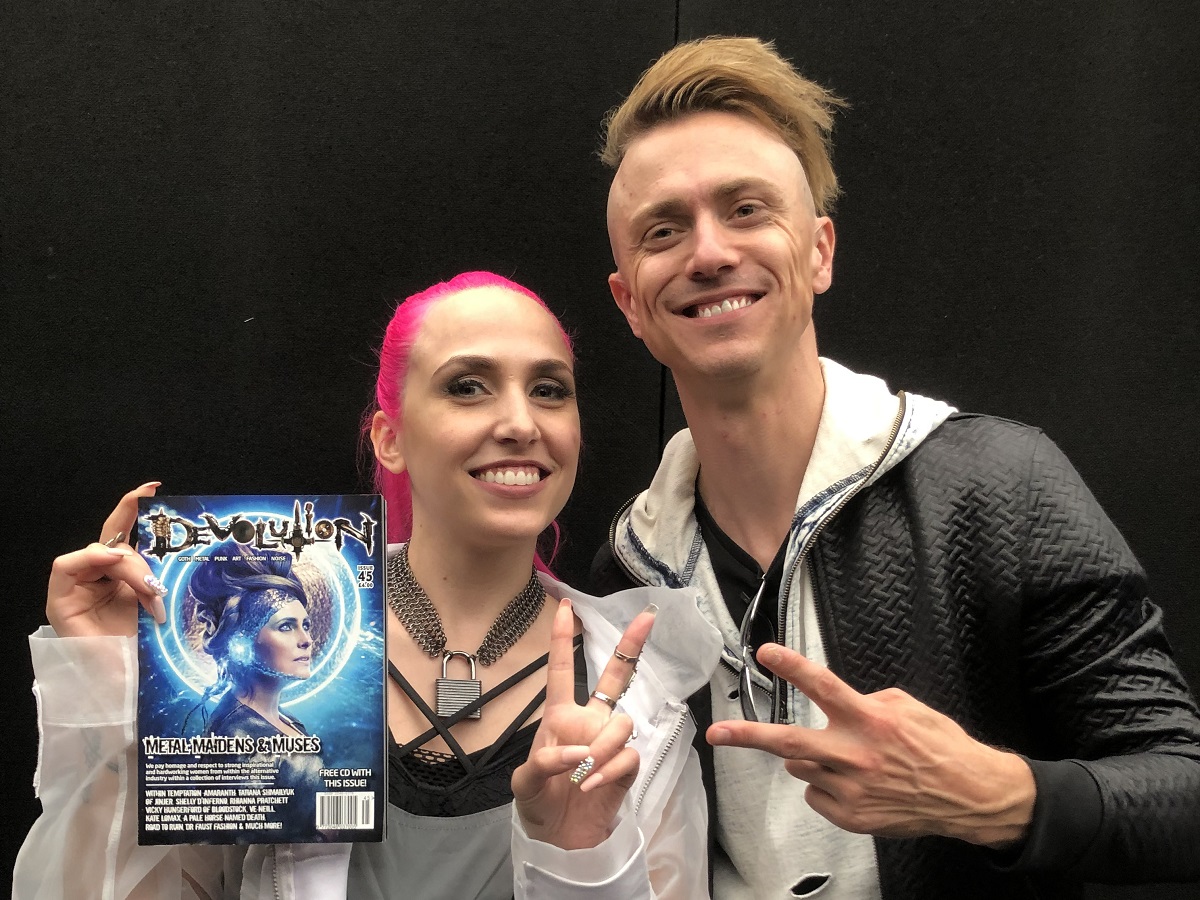 Mark Bestford chatted to Ariel and Shawn from Icon For Hire and discussed the benefits of being an independent artist in today’s music industry, their love of Linkin Park, and why the perfect Icon For Hire merch would be a box of chocolates.

What currently has you hooked on TV?

A “I don’t watch much but there’s that show on Netflix with Christina Applegate, Dead To Me? Yes, I just watched that one most recently, and I loved Handmaid’s Tale, but I can’t watch it because it makes me sad, but I love it.”
S “I’ve been watching all the John Wick series, because John Wick 3 just came out, Keanu Reeves. Amazing.”

Has to be done.

A “Oh my god, what we did yesterday.”
S “What?”
A “When we flew out at three in the morning to only come back to the country thirteen hours later. Three different flights, and we made it to soundcheck ten minutes late. It was perfection, but that’s not a practical joke.”
S “I think the best practical joke is telling Ariel we ran out of hand sanitiser. Freak the fuck out.”
A “I’m like a freaking germaphobe, and I’ve been in the industry for over ten years you’d think I would know by now that being a touring musician and a germaphobe is no match. It just doesn’t mix.”
S “The running joke is that she takes showers and hand sanitiser.”
A “That’s disgusting.”
S “You’re at the right tour.”
A “I’m at Download Fest.”

Is music undervalued because of Spotify?

A “Possibly, however, in an attempt to be positive and go with the flow of how the industry has changed we’ve seen a lot of positive ramifications because of things like Spotify. We couldn’t be a band if we weren’t a band in the internet era and without Spotify we probably wouldn’t have the exposure.”
S “We’ve seen a lot of good talent that may not get recognised come up through Spotify. But at the same time I understand why that question was in there, because it’s bitter sweet.”
A “It’s a double-edged sword. But because it is a huge part of it we try to work with it, try to make it a good thing, try to utilise it rather than demonise it. Because it’s easy to otherwise talk shit about it.”
S “There’s a lot of good young talented bands out there that get on a playlist, and they’re fucking massive the next year.”

A “Who do we sound like?”
S “We’re not that fucking unique.”
A “I know, we’re not special, but it’s hard.”
S “I probably learnt every Linkin Park song on guitar and probably a lot of Slipknot, it’s one of my favourites.”
A “People always compare us to other female fronted acts like Evanescence, Halestorm, and Paramore. Especially coming up that’s what we heard the most, but now I think we got compared to 21 Pilots a lot more recently because they do a lot more spoken word an alternative like we do as well. So I dunno, I’d say that.”
S “I would have said more like Def Leppard and Lynyrd Skynyrd but she would have kicked me out of the interview.”
A “Out of the band more like it.”
S “It was one of my first riffs, Sweet Home Alabama.”
A “When Shawn first started playing guitar he didn’t know what a riff was.”
S “No I didn’t.”
A “Adam was like, he was our old drummer, ‘play a riff Shawn’”
S “What the fuck’s a riff, but I can play.”
A “But now you know.”

You can sell anything as merch, what is it?

A “Maybe Icon For Hire Red Bull. So Pink Bull? Pink Unicorn, the name of our new energy drink line.”
S “I would sell hot pink fishing lures, because I love fishing. Icon For Hire fishing gear.”
A “I would want to do my own hair dye, that would be amazing. Or some sort of beauty, cosmetic thing. I did make clothes for a number of years, so that was really fun. I dunno.”
S “Icon For Hire cookbook.”
A “Yes!”
S “A cookbook, we like cooking.”
A “Yes, or just food, any brand of Icon For Hire food so we can be in it for free and we can eat it.”
S “All chocolates.”
A “Yes, great. Icon For Hire chocolates, done.”

Deal or No Deal, would you change your look or sound for a record deal?

A “Oh, no deal, because we don’t have a deal now and we’re great.”
S “No deal.”
A “We’re happy being independent, we’re totally…”
S “We’re completely independent.”
A “We would talk to a label if it was a good deal.”
S “I don’t think those exist.”
A “I don’t know, we haven’t found one yet. We’re very pleased and satisfied with our current setup.”
S “Talk to us next year.”

What are your thoughts on the current state of music?

S “I love the current state of music industry. I absolutely love it because as I said earlier I see a lot of young bands going you know what, if no one’s going to help us we’re going to go out, we’ll make a record, we’ll put it out on Spotify, on YouTube, make our own Social Medias. And we’re going to go out and tour our asses off because people are always looking for people to play. I love it. I love it. I love it’s always changing, you’ve got to stay competitive and on the edge and learn the tools.”
A “I love that the barriers for entry are pretty much gone. The gatekeepers are pretty much gone. It’s such a cool time, I really think that if we’d been a band fifteen years ago, it wouldn’t work. Because for in order to thrive we need to be very hands on, connected, communicating with our fans one on one and the internet, before there’d be a record label telling us how to communicate, allowing us, they would be that channel, and now we can do this as long as we want because there’s no one that’s going to cut us off and be like, you’re done, you’re irrelevant, goodbye, and drop us. There’s no one to drop, so it’s amazing. It’s kind of if you work hard and don’t suck you might much more likely get seen and heard and make something of yourself and have a career at this. Before you could work hard, and be really good, and still not really have a chance if you didn’t know the right person, which was frustrating. I’m very passionate about this!”

Message to your fans

A “All of our songs are messages to our fans. Today what I’ve been thinking about for you is what makes the strong badass people strong and badass. Is it that they are somehow immune to life’s challenges? They get knocked over, they get the blows just as much as anyone else. What makes them strong is that they maybe cry over their wounds for like five minutes, they feel that disappointment and then they get their asses back up and keep going and stay positive and keep trucking ahead. The people who are weak are the ones who stay down and that’s okay, we can stay down for a little bit, but you’ve got to keep expecting the blows and then get your ass back up and keep slaying it.”

Who would be your ideal headliner to open for?

A “I’d want to open for…”
S “I’m thinking.”
A “Gosh, because we just had some great bands over in the other interview and now I’m thinking of new ones. Because we always used to open for Linkin Park because they were our favourite and I realise that they’re not really the same anymore.”
S “If I could open for anybody, the band that taught me the most was Adam Jones from Tool. But I don’t know if that would ever fly but that would be badass. So badass.”
A “I think it would be a good fit if it was 21 Pilots.”

You can pick anyone you want.

What’s your favourite film and why?

A “Girl Interrupted because I have a lot of feelings and they do in that film as well.” 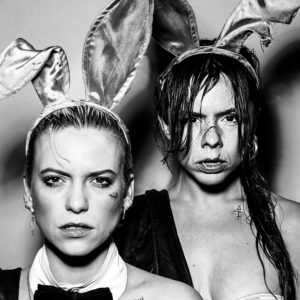 Mixing pop melodies with a garage punk vibe are Bones UK.  As the name implies they’re a band that are from the UK but have...
Copyright 2017 Devolution Magazine. All Right Reserved.
Back to top