Getting to play Download Festival is a big deal for any band.  Imagine though that you thought it was out of reach and never going to happen only to find you’ve made it onto the bill for the Boardie Takeover.  The Takeover runs on the Thursday in the village Doghouse and is made up of bands selected from hundreds of applications by a panel of judges.  Imagine going from playing to 30 odd people in a local venue to over 3000 at Download.  That happened to Cornwall’s O’Deus.  After the show singer Amy Abbott chatted to Gary Trueman about how it felt to play on such a big stage, female empowerment and her top tip for surviving a festival. 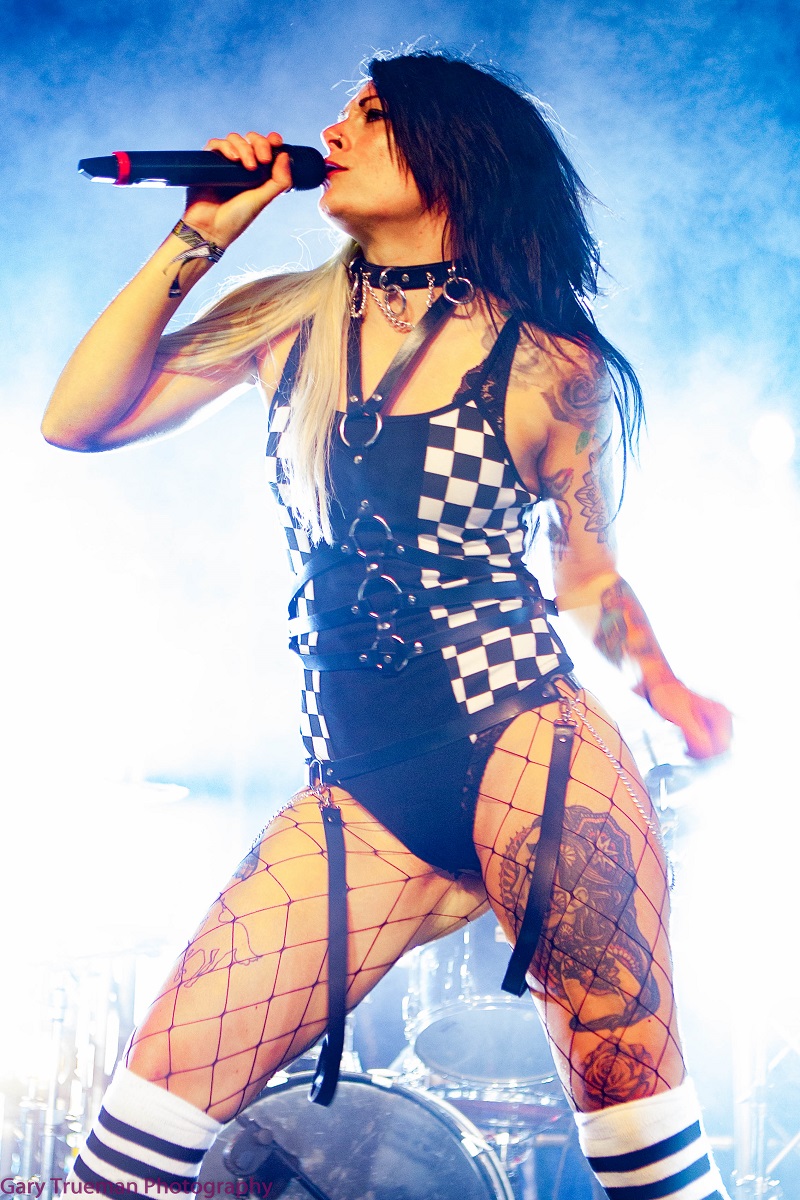 Where did you get the band name from?

“I joined the band a year and a half ago and previous to that they had a male singer.  The band have been around for about six years I think.  I had no idea what it meant when I joined but O’Deus  just means Oh God!”

You’re based in Cornwall which is quite a long way away from everywhere.  What’s the music scene like down where you live and does your location affect bookings because of the distances involved to travel out to shows?

“I think Cornwall has a really good music scene.  The only thing we have trouble with is venues down there for louder bands such as ourselves.  There are huge festivals but I think there needs to be a bit more variety and more for heavier bands because there are the people to support it.  It’s just having the places to play really.  And you also need money if you want to go and play shows elsewhere.”

What was the band like before you joined and what do you think you’ve brought to O’Deus?

“With their previous singer Ryan who I’m good friends with they were a kind of doom/stoner band and Ryan was quite growly whereas I like writing songs with catchy melodies.  I like heavy stuff, I’ve grown up on metal.  I want my music to be heavy but also to appeal to a wider audience.  When you’re a girl it takes it to a different level anyway and I do a bit of singing and a bit of rappy stuff too.  I do whatever I feel at the time.  I think I’ve helped to take it in a different direction and I hope that it appeals to a wider audience.”

You said that the previous singer was male.  How has the gender change of the vocalist gone down with older fans of O’Deus?

“I was actually a fan of O’Deus myself and I can remember watching them at a show and thinking they were really cool.  That was one of the last shows they did together before Ryan left.  I saw they wanted a singer and thought they won’t want me but I’ll chance it anyway.  I didn’t really know what their fan base was like before but we’ are getting there.  It’s a slow burner but hopefully playing the takeover will help to get people to see us.”

You’ve just played the takeover on a very big stage in front of a full tent with a 3500 capacity.  What was that like?

“I shit myself haha.  It was so nerve wracking but it was an amazing experience.  I’ve been really struggling with my vocals recently so I don’t think I reached my full potential  but at the same time it’s a once in a lifetime thing.  You’ve just got to give it balls so I did.”

The weather hasn’t been kind to the festival this year at least at the start.  Were you surprised how many people were in the Doghouse given the amount of rain and mud?

“Yeah, I was watching the two previous bands stood at the side and from where I was stood there didn’t look like there were that many people because I was right at the side.  But when I got up on the stage I was like holy shit!.  As far as you could see it was just heads.  That’s when I thought I was going to be sick.  I thought I was going to puke on people.  But I didn’t.  It was mad.”

Do you think the takeover gives an opportunity for the bands playing to see what might be possible in the future?

“Totally.  What we are seeing is seven bands with such a difference genre wise too.  And it’s nice to see lots of girls involved.  It’s quite a male dominated thing music especially heavier music.  So it’s been really nice to see an all girl group, myself as a singer and there’s a girl also playing bass in another one of the bands.  It’s been really good to see women involved. As well as performing my own shit I really want to inspire other women to come forward and get involved.  We can do it just as good.”

Women are fighting for a lot of things.  We’ve seen the MeToo campaign, the fight for gender equality becoming a big deal everywhere.  We’ve seen women fighting for rights all over the world.  Do you think that this global empowerment is something that now has real momentum and it’s something women need to be proud of?

“A hundred per cent.  I think women need to be more confident in themselves.  It’s taken me a long time to get to this point with my confidence and thinking that I’m worthy of being here.  Women need to support each other as well.  Women can all be guilty of being envious and jealous and taking things a bit too seriously. We should be able to have a laugh and a joke and be there to support each other and not be jealous.”

Do you think there are still people who don’t understand that it’s up to the individual to dress how they like?  In particular a lot of women get criticised for how they look on stage, too covered up, showing too much flesh.  Surely you should be allowed to just wear what you like?

“Oh yeah, I’m all about appear hoe the fuck you like.  I would say I’m an exhibitionist and I have no issues with what I’m wearing.  It doesn’t phase me at all.  I never used to be like that, it’s taken some time for me to not give a shit.  You should be able to wear whatever you want and say whatever it is you have to say.  As long as you’re not killing anyone what’s wrong with getting a bit of flesh out?  It’s your body so own it.”

It’s a promotion of confidence.

“Yes it is.  I used to think fuck all of myself and music has helped to bring me out of that.  I still get nervous now but it’s in a good way.  Just express yourself so long as you’re not being an arsehole it’s fine.”

You’re at Download all weekend so what bands are you looking forward to seeing?

“My main one would have to be Opeth, I love them.  Slipknot, Skindred, I love them too.  I really want to see Rob Zombie.”

What is your big festival survival tip?

“Get fucking rendered.  It keeps you warm and you don’t give a fuck about the mud anymore.” 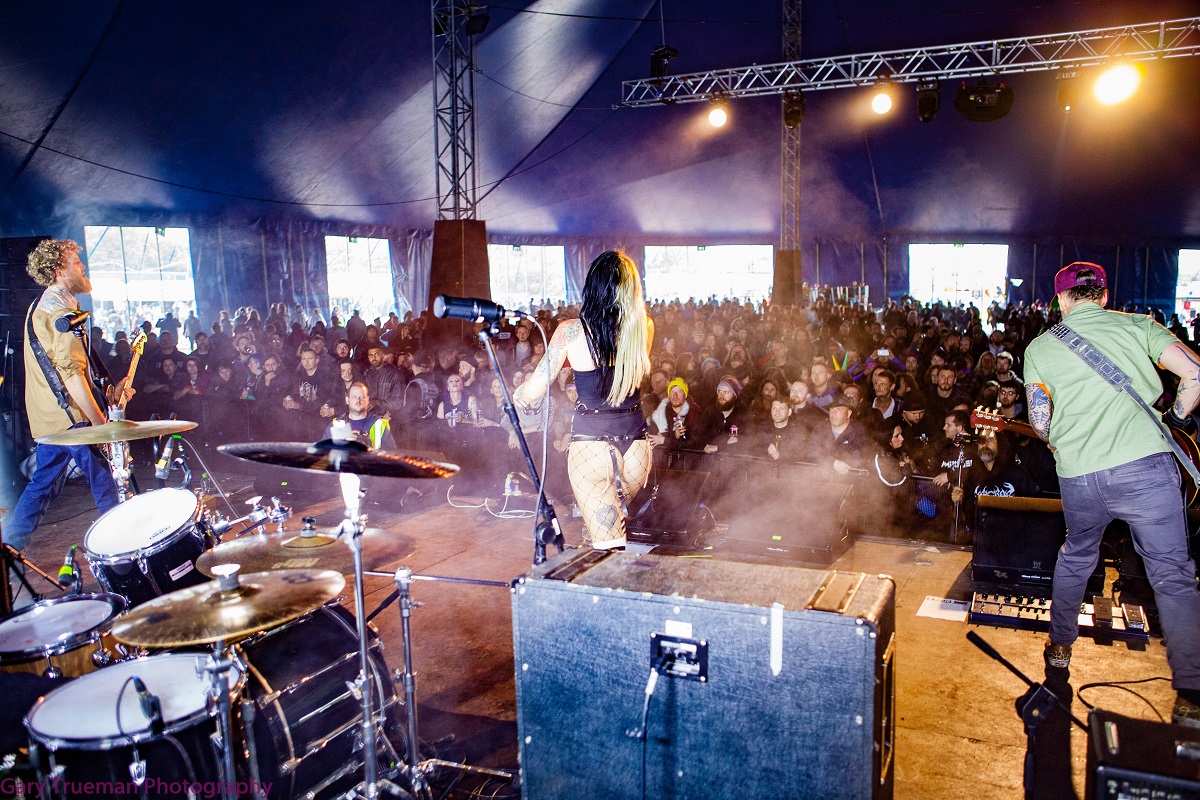 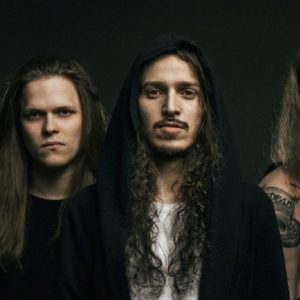 Hailing from Finland are Lost Society a four piece no nonsense thrash band.  They are stalwarts of the festival scene and nice...
Copyright 2017 Devolution Magazine. All Right Reserved.
Back to top