Interview: Ruby Dagger “Everyone has a fetish and if you don’t think you have a fetish I’ll find it for you.” 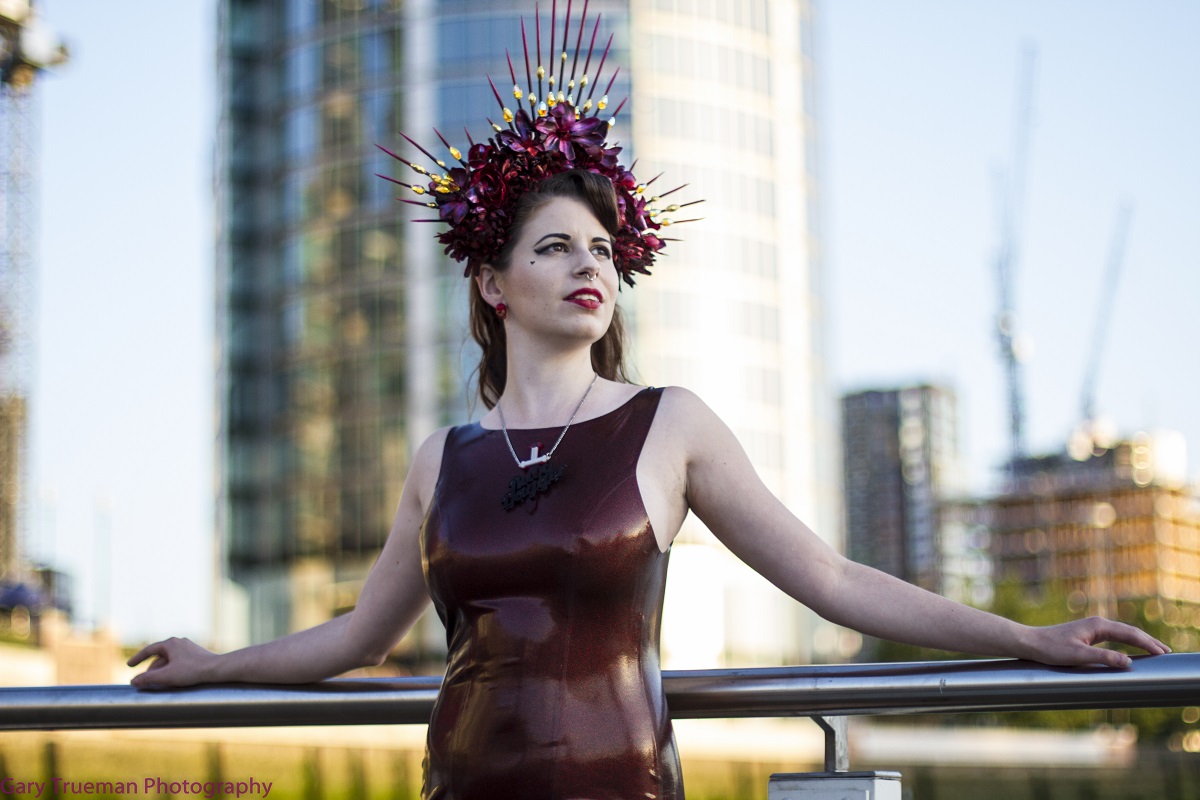 “I get asked about how I got to do all this crazy stuff and the answer is I’ve been on stage since I was six which is a really long time. I started off in theatre and then studied the arts at university, and when I finished I thought I’d quite like to do burlesque. So I started that in about 2011 at the Norwich school of burlesque. The headmistress there said I was doing really well but that my persona was so much more dangerous than what was coming across in burlesque. So she recommended that I do some circus skills and the first one I started doing was sword balancing and from there it just went crazy. I got obsessed with doing something provocative and dangerous on stage.”

“It kind of all happened at the same time, the modelling came first which was around the same time I was doing burlesque and I have a very dark look so then came the gothic fashion labels. They led to latex and the latex led to fetish work. Kink is something I’ve always been interested in since I was 18 or 19 anyway. Being able to make that passion of going to fetish clubs into a profession just happened naturally, which was great.”

With modelling specifically where do you take your influences from?

“Ooh, Threnody In Velvet, she’s absolutely stunning and I think she goes under the fetish name of Morgana. She’s beautiful and has a kind of femme fatale look. I also love Betty Paige and Marilyn Monroe and Rita Hayworth. I like that tumbling Hollywood siren look and being able to mix that with latex fashion and being able to create something that looks so beautiful and provocative is what I like to do.”

A lot of people think the modelling industry is all glamour but there’s a gritty side to it as well. There’s a lot of concern at the moment about photographers pushing models. Do you have any experience of this or thoughts on the subject?

“I’m someone who advocates for safety as essential. That’s not just in kink that’s also the same for any modelling shoot. Everything has to be safe and everything has to be consensual. If there is a photographer who is pushing levels and I see it I am very vocal on social media about it. I like to raise awareness and let other models know. My advice is if you see it then report it.”

The style of modelling you do would be considered alternative. Do you think it’s creeping into the main stream a bit now too?

“Absolutely. Fifty Shades Of Grey is something I don’t like but because of it kink has become main stream. Whether the story of My Grey is one you love and cherish or despise like me it has brought that latex and alternative vibe into the main stream. People are so much more aware of the LGBTQ community and the drag community. And also models who are disabled. There have been major campaigns from people like ASOS who are a great example, they did a whole series of sports wear based on disability. I’m not a six foot high model, I’m five foot five and in the industry that’s short. I think people are becoming more aware of their own body types and feeling more confident in them. Because of that confidence they’re allowing others into the fold.”

“If a dom has a sub with her there’s a good way and a bad way to approach her. The good way is to stand and patiently wait and to allow the dom to speak to you. If she doesn’t want to speak to you then she doesn’t want to speak to you. I don’t like it when men hover around me. It’s important not to interrupt the play. The worst thing you can do is just go up to a dom and expect them to be at your disposal. This is work for us, it’s a profession. It’s not about what acts my subs want to have happen to them it’s about how they want to feel, that for me is the most important thing.”

Do you think the fetish scene is totally misunderstood by people who are not a part of it?

“It can be. I think that people think my job is to have sex with my clients and beat them up and that is not the case. I do not sleep with any of my clients, I do not even have much of what you may call sexual contact. Some of the most requested sessions are things like foot worship or things like I want to be in a bath tub with a ton of baked beans being poured over me. There’s a sense that anyone who is in fetish is weird, but we’re all weird in our own way. Everyone has a fetish and if you don’t think you have a fetish I’ll find it for you.” 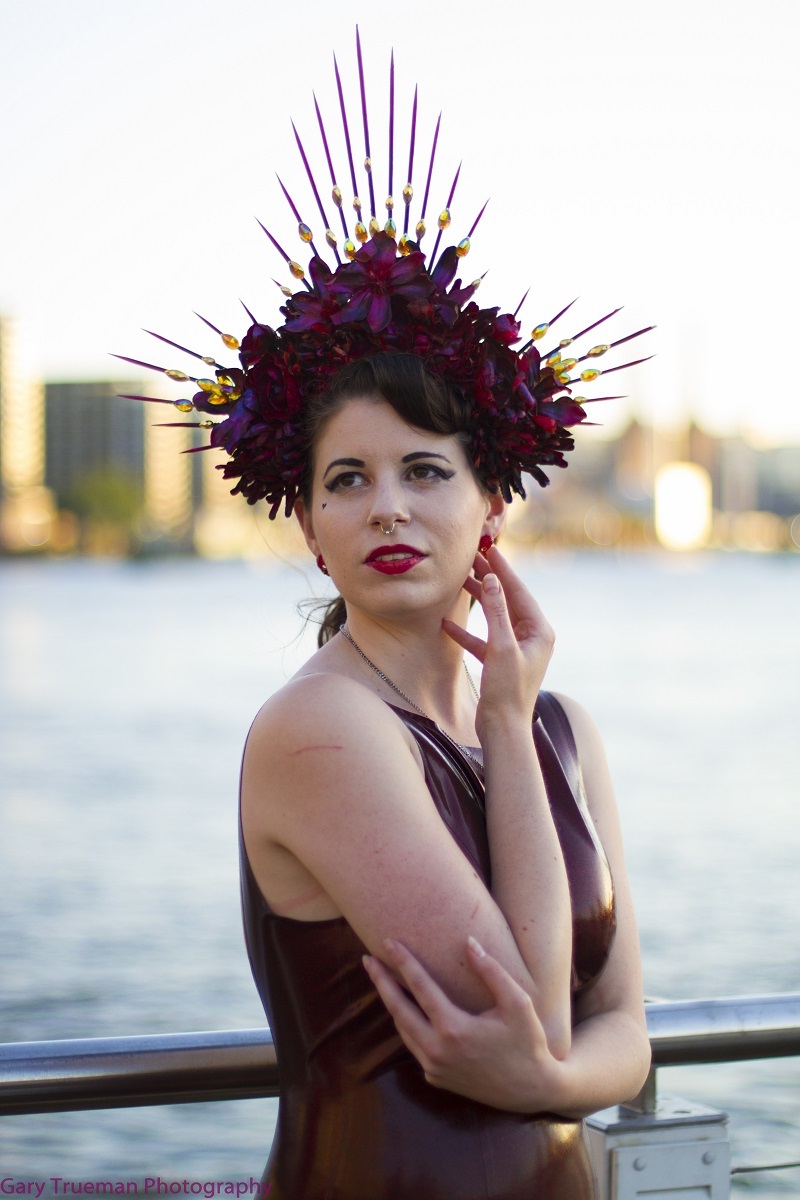 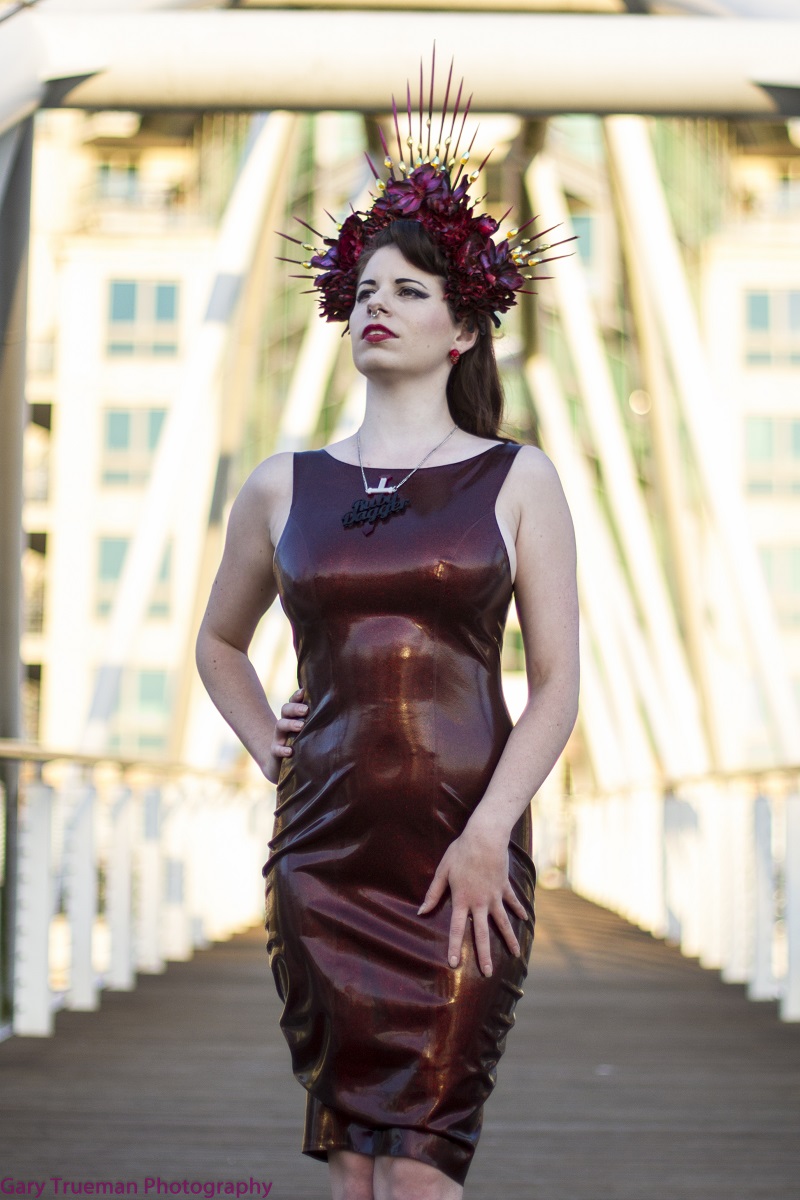 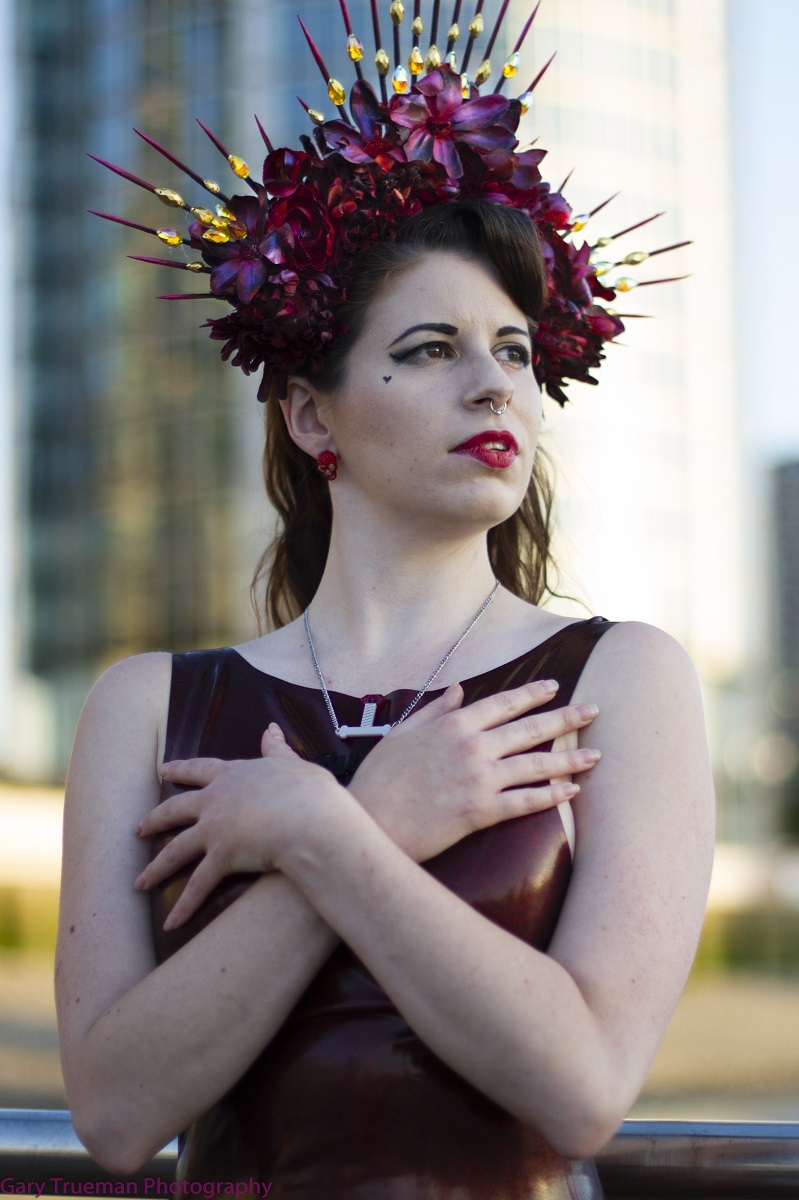 You do dangerous stuff too with knives, fire, swords and whips. Have you ever had any accidents practicing?

“No is the short answer to that. I think the worst accident I had was just cutting my foot a little bit on some glass when I was doing some glass walking. Sword swallowing is a bit of a dying art at the moment. There are not many women in the UK who are learning the skill, and I say learning but I am not stage ready for sword swallowing. Knife throwing is something I do without a human target, at this point. In terms of actual real injuries I haven’t had one yet. I say yet because every single person in this industry when you’re doing it for ten years, fifteen years, you’re going to have something happen eventually. It’s the nature of side show but you just have to be as safe as you can be.”

You also do fire and that’s very popular at the moment.

“I cannot fire breathe at the moment and that’s something I definitely want to do. I can fire eat and do all the transfers on the body and body burning, that kind of thing. I have just got myself a fire sword and it’s the best thing I ever did. I love my swords and I love my weaponry. The next thing I want t get is the fire whip. I already use a whip so with a fire version I already have the movement.” 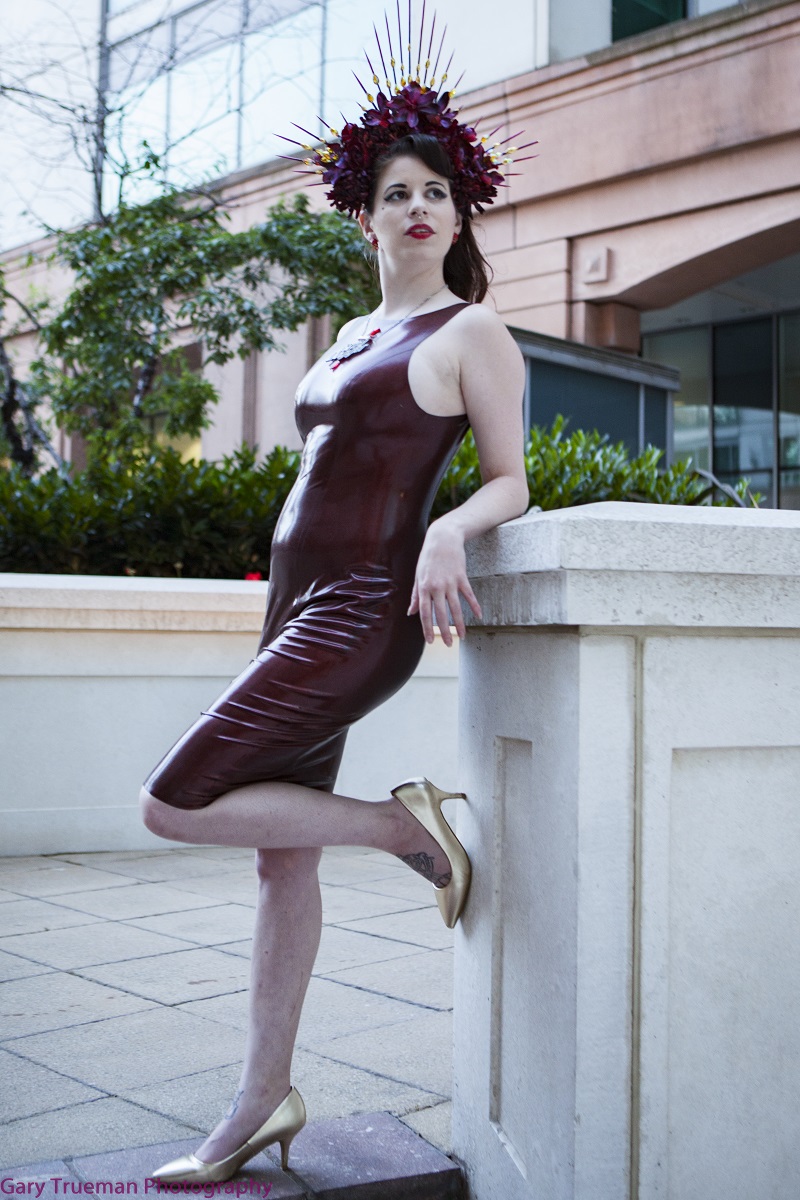 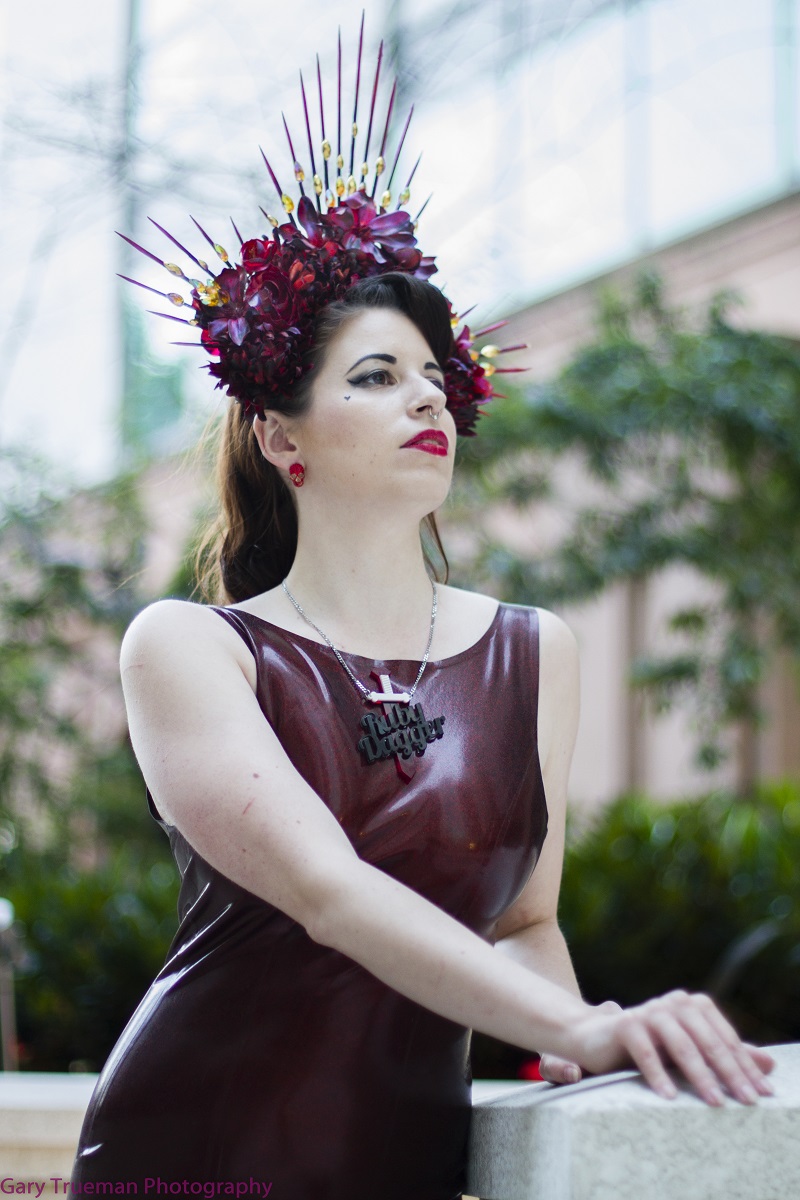 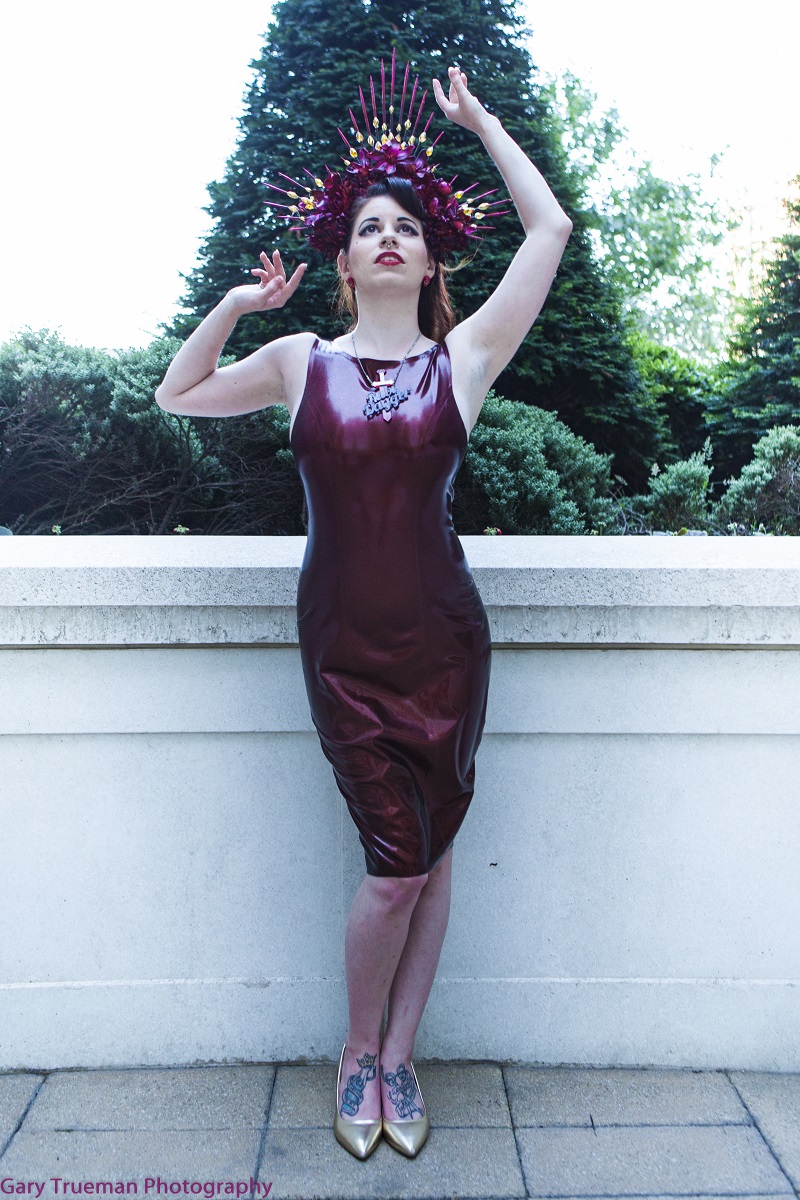 Do you think it’s important for acts like yourself to make the most of themselves in what is a niche market?

“Absolutely. Side show is having a little bit of a revival. It’s really important for people to keep those arts going. There’s a misconception of the history of circus that we’re all just clowns who run around and leave the place in a state. We’re not like that, and it’s so important for these things to be treasured.”

Have you got any advice for a young girl who wants to model or learn fire or other side show acts?

“Don’t let your gender dictate what you can and cannot do because I have been told many times dangerous stunts are not the thing for a lady. They are so go ahead and do them. If you want to model then get yourself a portfolio and with every single shoot take a chaperone. If you want to get into fire or any circus skill at all then find your local circus. Do not teach yourself fire or side show in your back garden. It is dangerous and even professionals will get burned. And go where your heart takes you.  Mine has taken me to fetish and danger. Follow your heart and don’t let anyone stop you.” 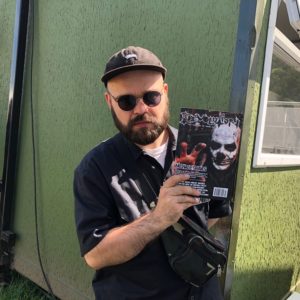 Mark Bestford chatted to Josh from Puppy about their forthcoming album, their end of summer tour and their ultimate goal...
Copyright 2017 Devolution Magazine. All Right Reserved.
Back to top