Mark Bestford caught up with Adam and Baz in the Download sun where discussions included camping to save money, their new album and their love of Status Quo. 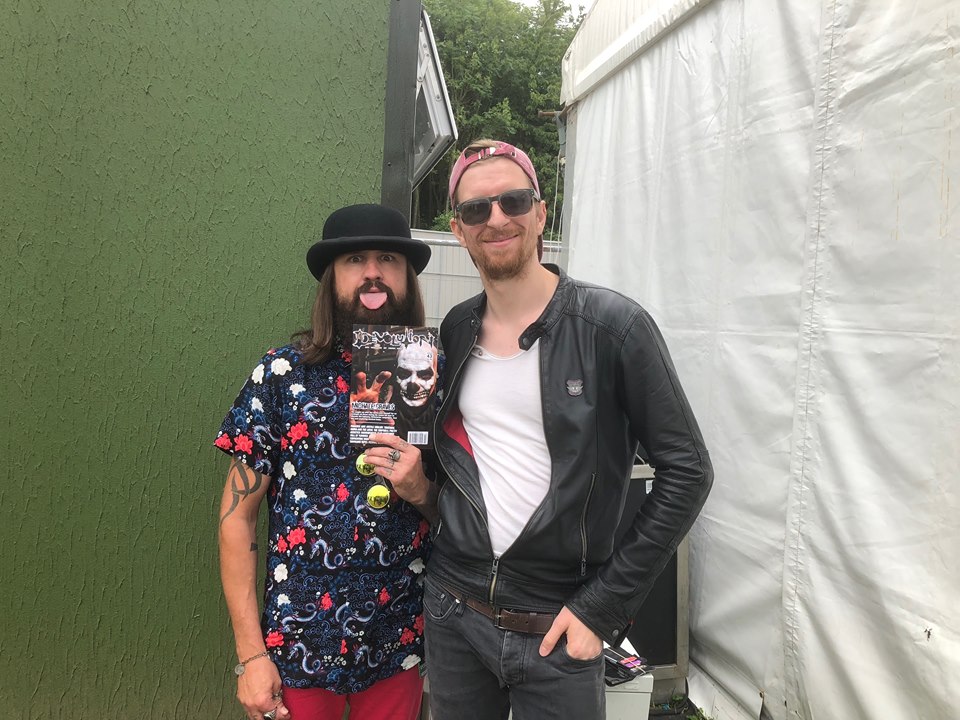 You’ve got a new album coming out, what can we expect from it?

B “It’s Full Nelson, it’s out August 10th. It’s a step up. We kept writing after Welcome To The World, we were really happy with Welcome To The World, that was a big album for us. That kickstarted things off for us, really up a level, but this album I believe is a real step up again for us. We signed with Earache and we really knuckled down writing songs this time and spent a lot more time on recording. Pre-sales are going really well and the singles we’ve released so far have just been lapped up. The people who like the band have just loved the songs, it really makes us happy. It’s a real belter.”

A “I think what Baz says, it’s from a recording standpoint and production value we’ve definitely spent more time. It’s richer, more original, more us. It’s got our Massive Wagons stamp on it.”

Do you have any fun tales from being in the studio?

B “Fun tales. This time to be honest it was a bit more of a serious affair. When we recorded Fight The System we decided we were a lot, well we’ve never been a band with loads of money, but back then we were completely potless so we couldn’t really afford hotels. We recorded in Doncaster so we decided to camp for the whole duration because hotels were 20 quid a night each and the camping was 8 quid a night for a pitch. You could have 2 tents and get everybody in 2 tents. So we camped and washed in the shower block and ate Chinese takeaway every night. But that was character building. It seemed a laugh at the time, and ridiculous, but the bonding, and a great laugh, and the craic, it was brilliant man. It was great, brilliant it was, good fun.”

Do you have a joker on tour?

A “Our drummer, who’s stood back there. He’s just a big joke.”

The radio response over the last year, has that surprised you in any way?

B “Radio response? I don’t know if it’s surprised us, maybe it has. It’s been unbelievable, yes I suppose it has surprised us. To be picked up by some of these bigger, we’ve always had a great support from the likes of the smaller stations. When you start getting bigger stations start picking you up you start to realise wow, we’re really getting out there. Planet Rock have just been, Primordial, it’s just fantastic. It’s what a band wants, playing places like this and being played on the radio is absolutely mega.”

A “We’ve always had a confidence in our own music so we’ve always felt like give it a chance. And now we’ve been given a chance it seems like it’s justified. People are always tweeting the stations and Primordial are another radio station that’s got behind us , always playing the singles and they’ve got a very vocal support. It goes beyond casual listening, they becomes fans for life, that kind of thing.”

Musically, what’s been the biggest influence on the band?

B “Musically? We don’t sound a lot like them, but certainly back in the day when we formed around 2008 we were big Airborne fans. We went to watch those guys as a group at Manchester Academy and they blew our heads off, the energy there, the fire, the power was just like nothing I’d ever seen, we’d ever seen before. We came out of there ears ringing. After about a week when we could hear each other we decided this is what we want to do, that’s how we’re going to do it and this is what we’re going to do. I don’t think we sound like them, but we certainly the energy, we try to put them energy levels in. We’ve had so many influences over the years, we’re big UFO fans, Thunder, the British rock Slade. We toured recently with Ginger Wildheart, he’s become a massive influence on us, well my lyrics anyway without a doubt, I think he’s one of the best lyricists in the country. Yeah, British rock music really.”

You’re doing quite a lot of festivals this year, will you be touring after the album comes out?

A “Yes we will be, later on in the year. No details to reveal just yet, but we’ll definitely be getting round the UK again. As you said, we’ve got a lot of festivals up to that point. On the week of release we’ll be arranging quite a lot of in-store acoustic gigs, short and snappy but it’s a nice way to get out there and meet people personally. A few other surprises hopefully, we’ve got Stonedeaf Festival, that’s at the end of summer. That seems to be a good buzz about that and it’s one stage, one day.”

B “They’re trying to recreate the Monsters of Rock vibe aren’t they, the old school vibe this place had. The camping and the camp fires and the one dayers and they’ve managed to source the bands and members of bands who were there at the first ever one I believe. Graham Bonnet’s playing, and Skid Row. It’s going to be a great day.”

this place had. The camping and the camp fires and the one dayers and they’ve managed to source the bands and members of bands who were there at the first ever one I believe. Graham Bonnet’s playing, and Skid Row. It’s going to be a great day. I can’t wait.”

Any plans on heading out into Europe?

B “Absolutely. Certainly the response we’re getting from the new songs that have been released so far from the album, the singles, seems to be doing really well, like in Germany in particular. For a band like us it costs money to get out to these places, we’ve always thought it’s best to bide our time and go when we know what the reaction’s going to be like really and it seems the demand is there now. So absolutely before too long we will be out in Europe.”

Do you guys have favourite songs to play on stage?

B “Favourite song? I think we all have our own favourite songs to be honest. I’m loving the new stuff really. We’ve not played the new single Billy Balloon Head live yet. We’ve been practising it, and we practised it the other night and to me that really sounds mean. I can’t wait to get that into the set. The new stuff’s just been great. It’s hard because they come and go the favourites. We play the old stuff and when we play the old stuff for the first time it’s your new favourite stuff and then when you’ve been playing it for years, you always want to play new stuff. It becomes really enjoyable. China Plates is a real big one for us at the moment.”

A “A track called Back to the Stack. It’s actually on the new album, it’s never been on an album, but we wrote it, about 18 months ago, early last year. It was released as a one-off charity single but it’s been revamped and put on the new album. That song’s always been amazing live to play because it’s quite easy so you can just concentrate on the performance and we tend to open with it.”

It’s got quite a lot of references in the song

A “Yeah. Baz wrote the lyrics, but I think it’s a tasteful tribute you know. We mean it hand on heart, we’re massive Quo fans. Rick Parfitt in particular seemed like to just embody everything that we want out of being in a band.”

B “We wanted him to be remembered as well because the big, it’s all sad, David Bowie passed away at the same time, and Lemmy, Prince. We wanted Rick to be remembered, there’s a few Lemmy tracks out there and stuff but Rick was a big one for us and we didn’t want him to be forgotten. Not that he ever would be forgotten but you know what I mean. We wanted to make a point of putting a song out there for him. He’s written enough songs that we’ve enjoyed.”

A “And the Status Quo fan club and the community are quite vocal and they will tell you if something is rubbish. They were really behind it and they said some really nice things and for us that was the only approval we really needed.”

It’s one of the most requested songs on Planet Rock I think.

B “Oh brilliant. Yeah, we had heard that. That’s fantastic, what can you say about that. I mean that’s just fantastic. Great people at Planet Rock.” 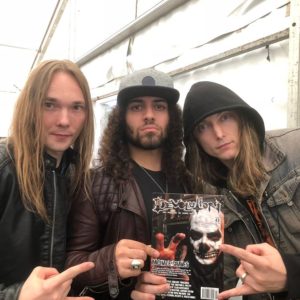 Savage Messiah dish the dirt on Dani Filth, talk about their post-apocalypse playlist, and about being invited back to play...
Copyright 2017 Devolution Magazine. All Right Reserved.
Back to top