The world of alternative modelling is a wide and wonderful place full of people who look edgy and amazing. That world also regularly crosses over naturally into the performing arts.  So it’s no surprise to find Kiara Baker, one of a group of talented young models rising through the ranks is also in a fire troupe. Gary Trueman chatted to Kiara about fire, her image and model safety. 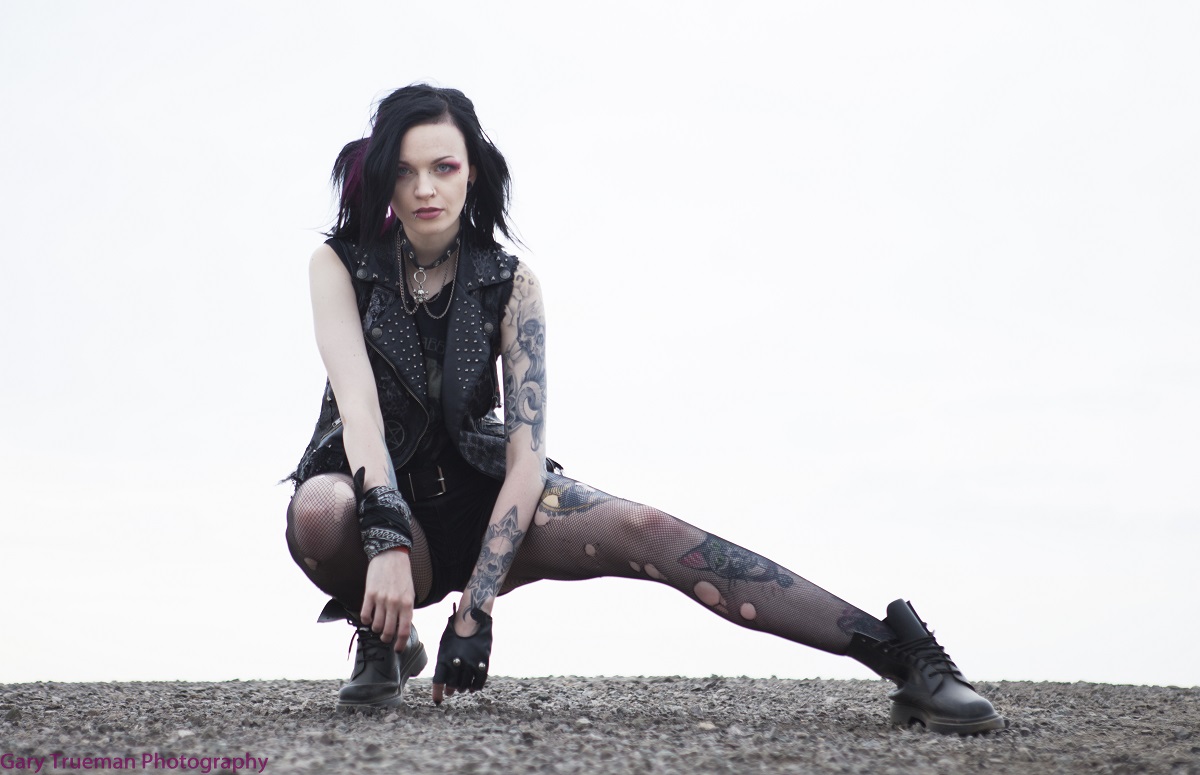 How did you first get into modelling and when was your first shoot?

“I’ve always been interested in it. When I was growing up I was always very tall, so much taller than everyone else for my age and you kinda think what you want to do when you’re older. My family and friends said I should be a model and when people say that you think about being a catwalk model, a main stream fashion model. But I’ve always been interested in rock and metal and more alternative fashion. I had my first shoot when I was 15 with a friend of a friend and we collaborated. I had bright orange hair at the time and wore ripped jeans and loads of crazy accessories. I loved it and had so much fun. I looked into the catwalk modelling and realised I had to be a lot skinnier than I was although I was quite slim anyway. I realised I didn’t really agree with the beauty standards at the time of looking unhealthily skinny. Obviously if you’re naturally that tiny then that’s fine but I didn’t want to make myself unwell. So I decided to get tattoos when I grew up and be an alternative model.”

You do alternative modelling now and it’s the main stream that have started taking on a lot of the alternative look now. It’s not just band shirts in Primark, tattoos have become more socially acceptable, and piercings too. So would you ever be tempted to cross over?

“I have been on a few shoots before where it’s a group shoot for a main stream brand, like I had a wedding shoot recently so all wedding dresses. All the bride and groom models were all no tattoos and more natural looking and I was classed as the more outrageous model rather than being alternative because they didn’t want to market it as that. I don’t really know how I feel about how alternative fashion is creeping into the main stream world. It’s quite funny really because when I was growing up and was into alternative fashion I always got called a goth by people now wearing black lipstick.”

Where do you take your inspiration from for your look?

“Well I’ve always been into rock and metal music. My dad brought me up on Guns N Roses, Motley Crue and that kind of thing. I went into the 80s glam rock fashion and I don’t always stick to that but I love cheesy hair metal, like big hair and spandex. A lot of the men in those bands look like women anyway haha. I’ve also got a soft spot for female musicians like Lzzy Hale and Maria Brink, she’s incredible. I know a lot of people find a style and stick to it but I have so many people who inspire me, I follow so many people on Instagram. There’s so many amazing women, and men, and I love their fashion. I used to colour my hair a lot too and I used to like Hayley Williams from Paramore. It’s just bits from here and there which I mould into my own look. I’ve always loved Dita Von Teese as well, the more gothic burlesque type of thing.”

You have to place a lot of trust in your photographers as a model. Have you ever had any experiences where you’ve felt uncomfortable, where a photographer has tried to push levels or made unpleasant comments?

“I do worry a lot about young models that maybe don’t know what they’re doing so much. I’m all up for people learning and getting themselves into the industry but it’s so important that they’re safe. It’s important they have a good way of working and that they are working with people who are genuine. There are a lot of groups on Facebook and networking sites. There are occasional events you can go to to meet up with people. I prefer networking with photographers in person personally because you get to know what kind of person they are and the internet can be a weird place. You have to have your wits about you and be sensible. I’ve had photographers say they don’t want me to bring a chaperone even if I haven’t asked and that’s a red flag for me.” 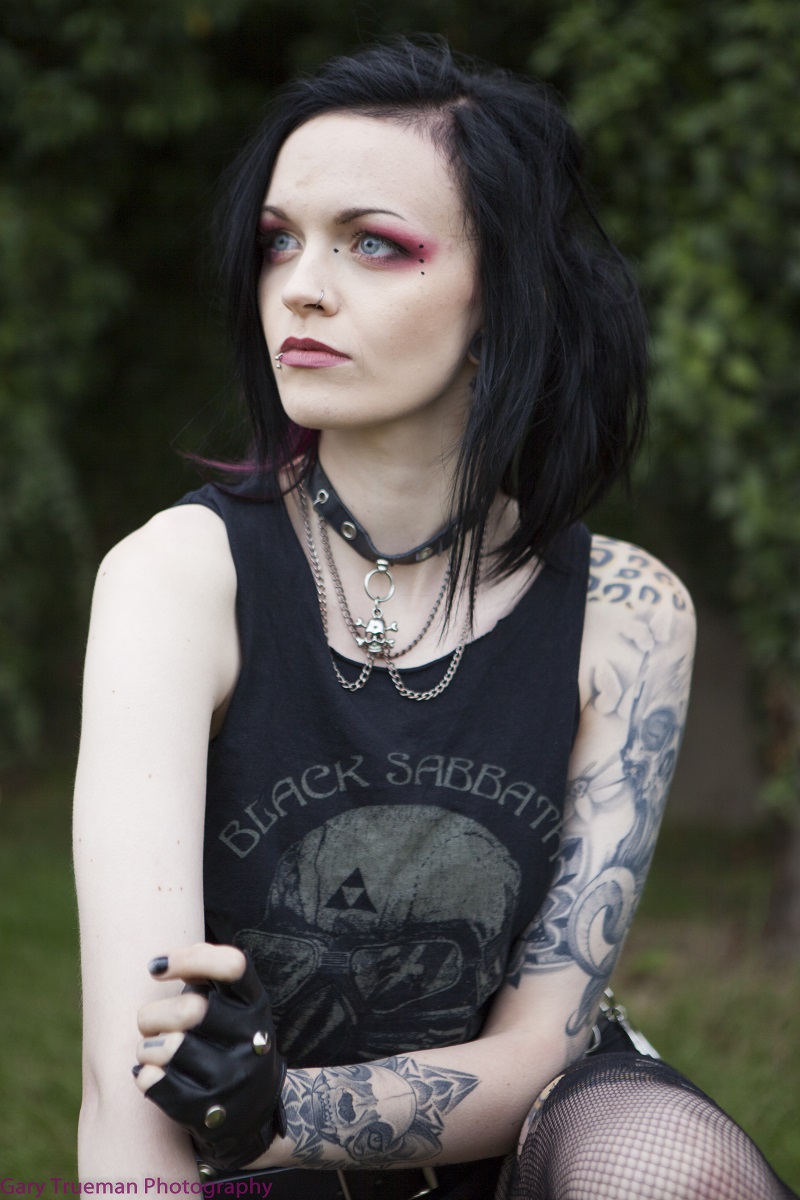 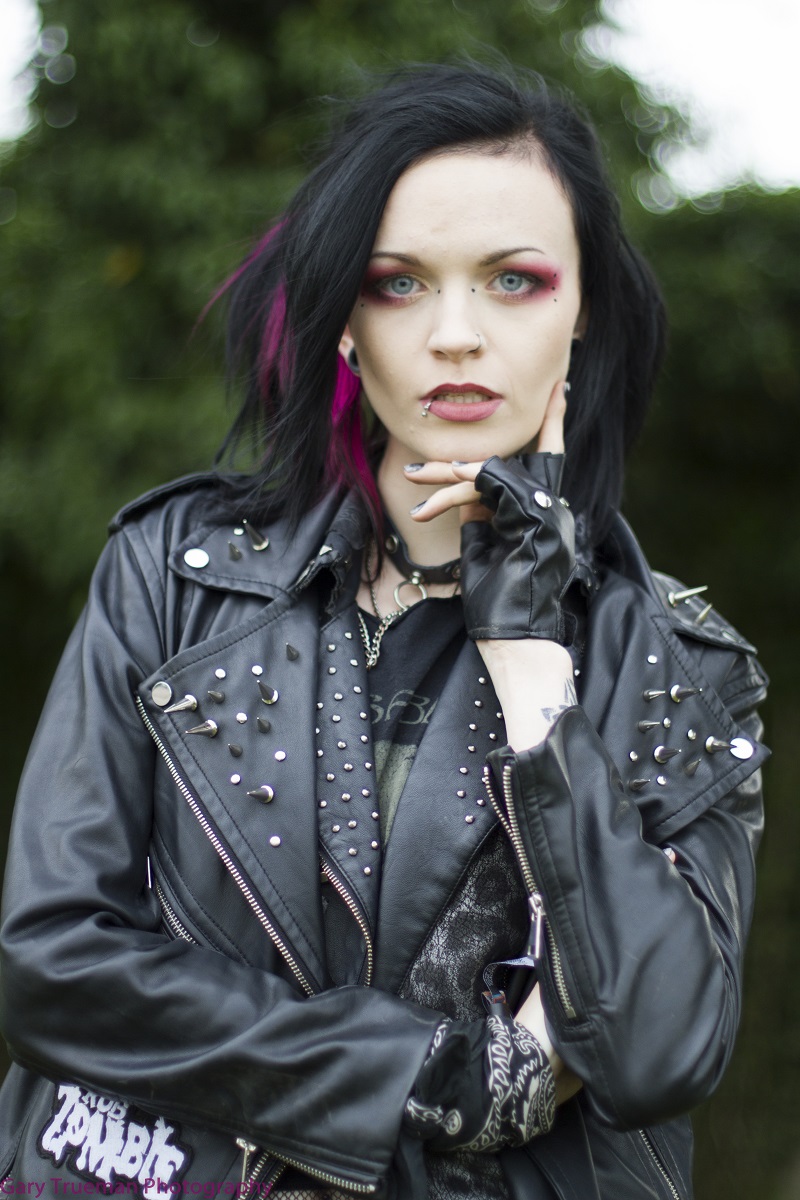 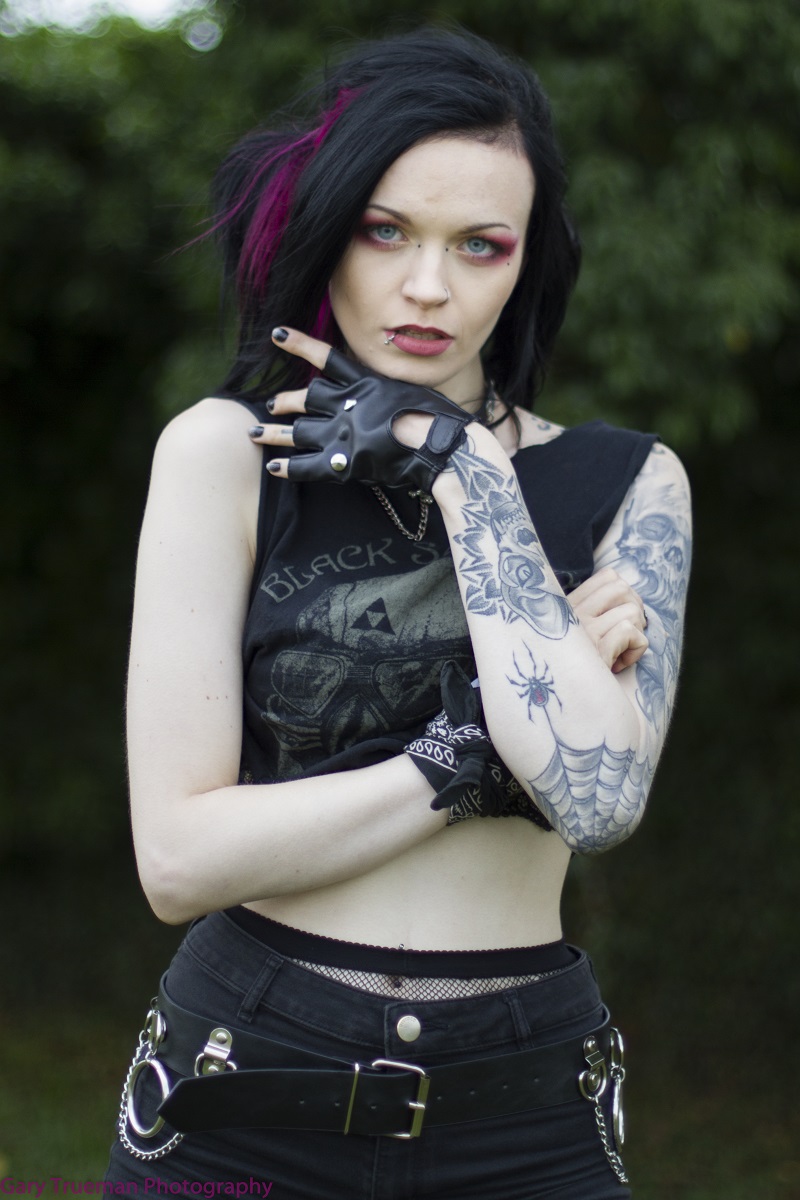 What about your look, what brands do you use?

“I’ve recently discovered that a lot of brands test on animals which I’m not happy with. I’m quite new to staying away from those brands because I’m still learning about them. I like brands like Lime Crime and Jeffree Star. I wasn’t good at make up growing up but I think I’ve got better through modelling because your make up has to be immaculate. Make up isn’t a massive thing for me but I do try with it and take a lot of inspiration from people online.”

For clothing do you buy off the shelf or do you like to customise?

“I do a bit of both. I’ve always customised my clothing, I like cutting things up and sewing things on. I recently started my own clothing brand called Poison Freak. I don’t make things from scratch. I got started by making bras to perform in with spikes on them and people really liked them so I ended up making them and selling them. I like customising because I can’t always find what I want and I’m quite fussy with clothes. “

You hair is black at the moment. Is it something you change a lot?

“I used to change it all the time. I was hair dressing from when I left school and although I don’t do it as much now back then I was changing my hair every week. I think I’ve had every single hair colour. I’ve had black hair for a few years now which is really unusual for me, but I do have a pink streak in it now so I do have a flash of colour. I like the gothic look and I like that it goes with my pale skin.”

You have a lot of tattoos. Do you have a favourite and do you have one you don’t like so much?

“I love all of my tattoos and I don’t regret any of them. I have a silly tattoo but I don’t regret it. I have a black and white sleeve which isn’t quite finished yet. It’s all filled with quite macabre dark gothic things which I love because I love horror. I’ve got all sorts of things dotted about, some of them mean things to me, some are really important.  Whereas some I just liked them so I got them. The only thing I would change if I had a blank canvas and could start again is that I would have no colour and have them all completely black but it’s fine I do like my colour ones too.” 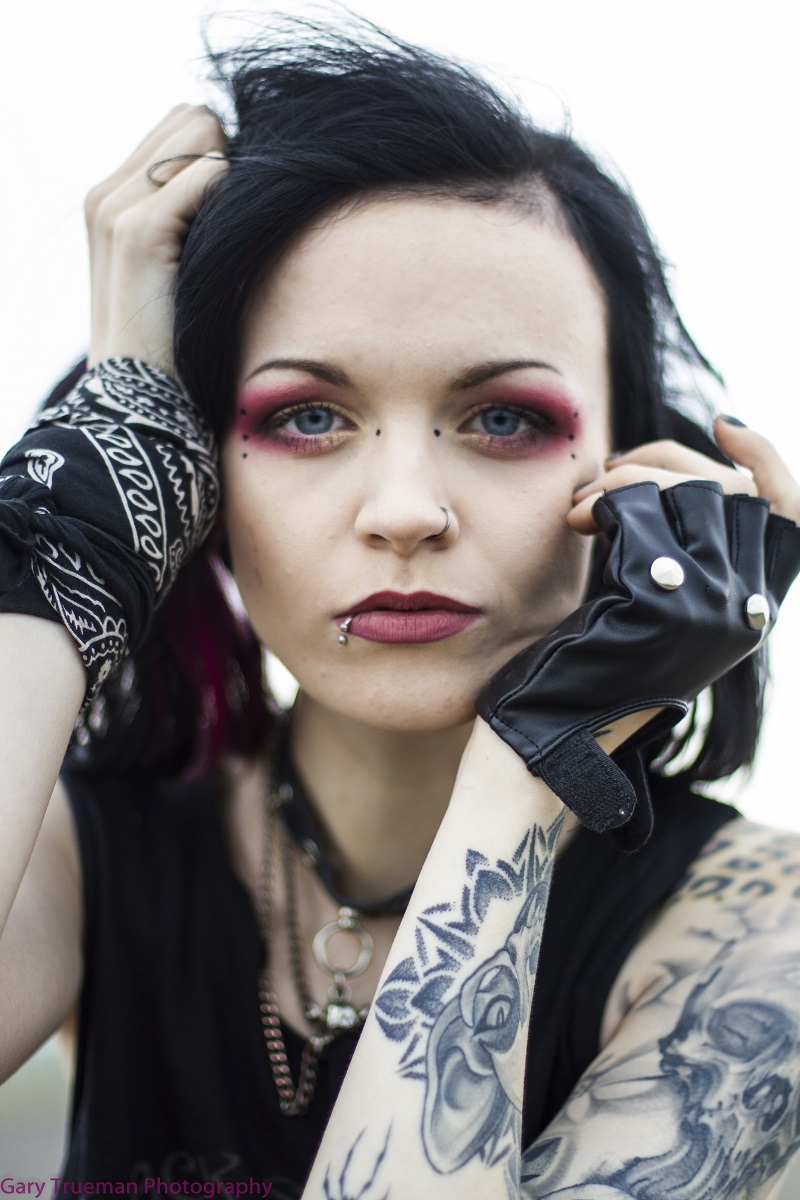 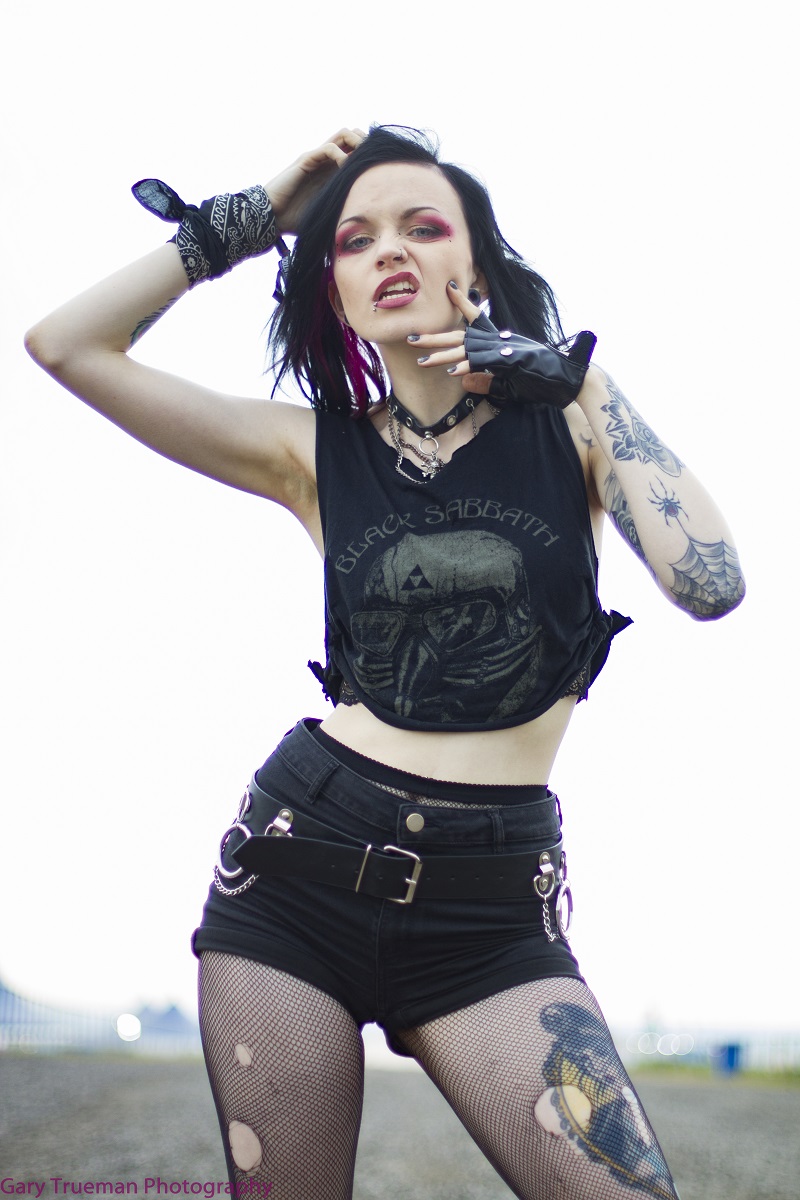 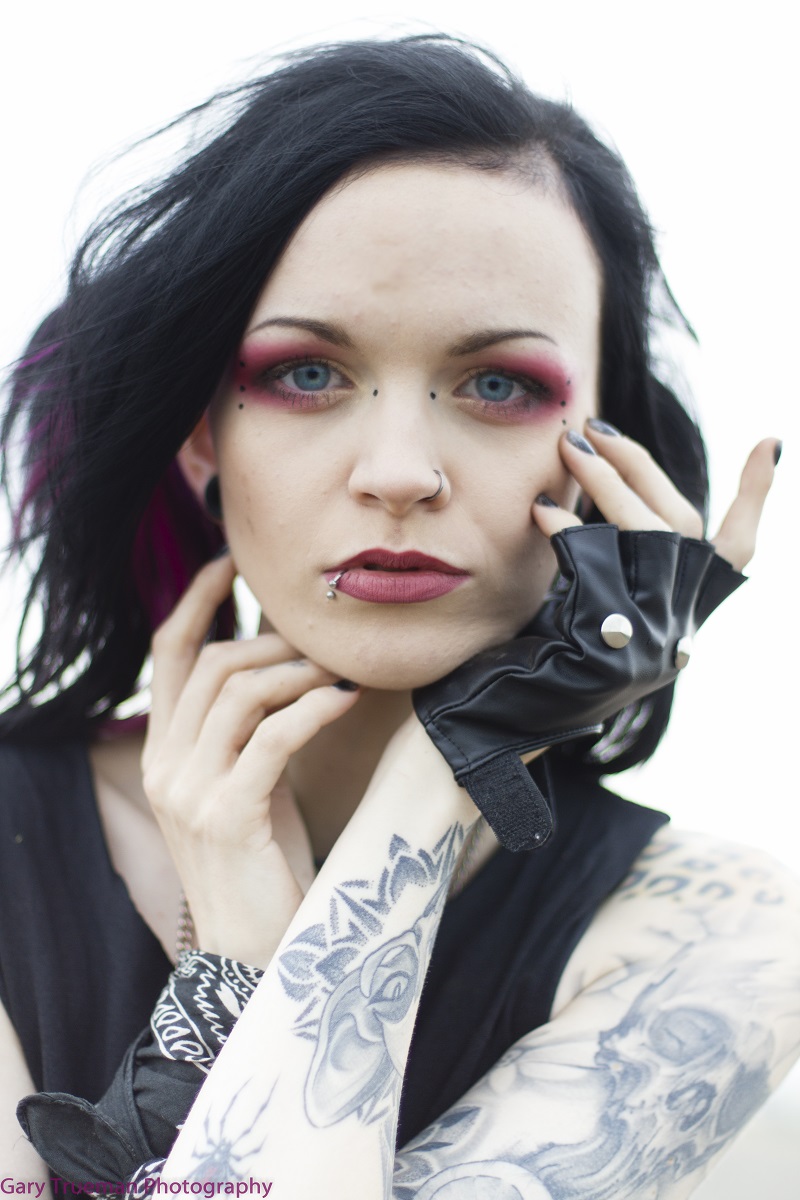 You’re a fire performer too.  How did you get into that?

“I was lucky to know quite a few people that do fire. I have a close friend called Ashley who used to do a bit of fire, and another friend called Olivia who performed occasionally and we used to practise together. I got more into it, I bought some fire fans and it just escalated. There’s a group that met up every so often and we’d all teach each other the skills we’d learned. I’ve just always been interested in it. That group of friends, we decided we’re actually not bad at this, and a few of us had dancing backgrounds, so we decided to put a group together and it’s called Hellrazer. I first saw an angle grinding performance at an Alice Cooper show when I was very young and I absolutely loved it. I immediately wanted to learn how to do it. Years later I was fortunate enough to be taught by my friend Shelly D’inferno of Pyrohex when I was helping out at one of their shows at Bloodstock. I now include angle grinding in my own performances and I love it”.

Is there anything that you want to achieve in the future?

What’s the one piece of advice you’d give to a young girl asking about getting started as a model or fire performer?

“It’s hard to think of just one piece of advice but for modelling I’d have to say choose your photographers wisely and choose your portfolio wisely. Stuff like glamour modelling and lingerie, I’m absolutely fine with that but if you do choose to do that you need to remember those photos are going to be there forever. Be safe, that’s really important. Bring a chaperone if you want and don’t work with someone if they make you feel uncomfortable. As a model or a fire performer, be yourself and create a brand around yourself. And be nice, it pays to be nice.” 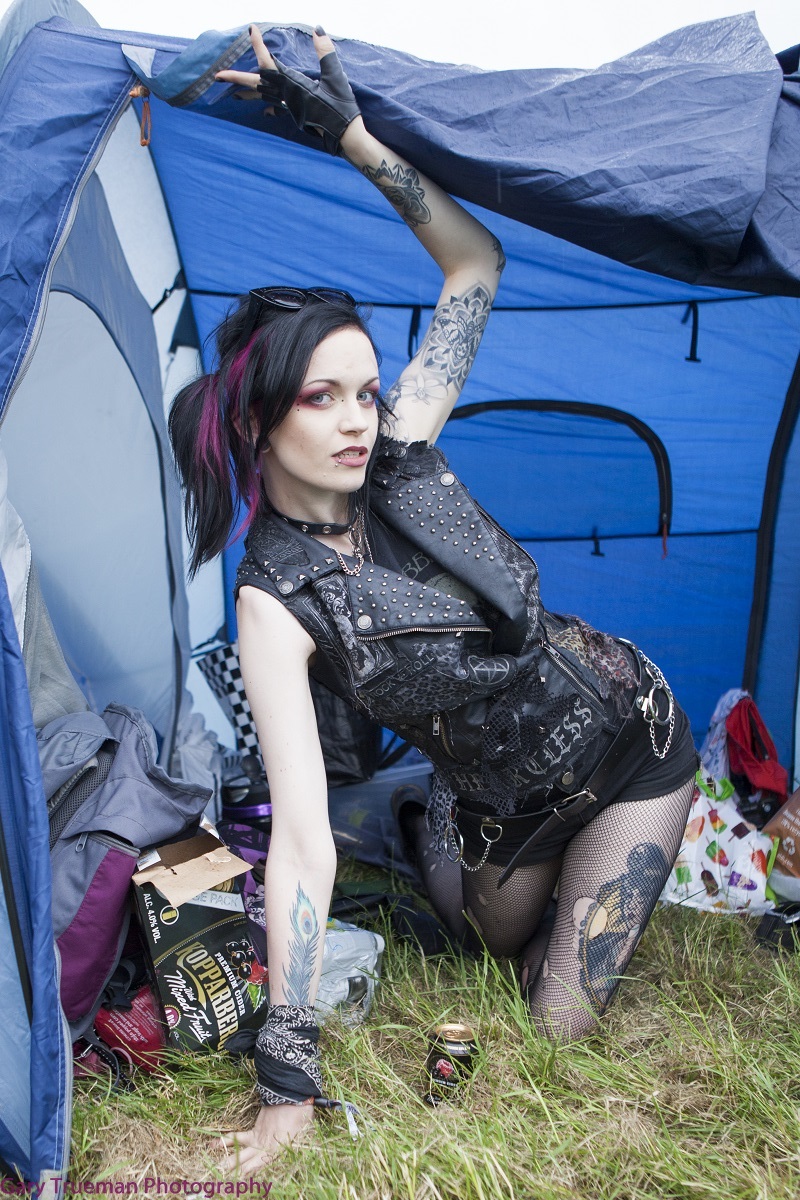 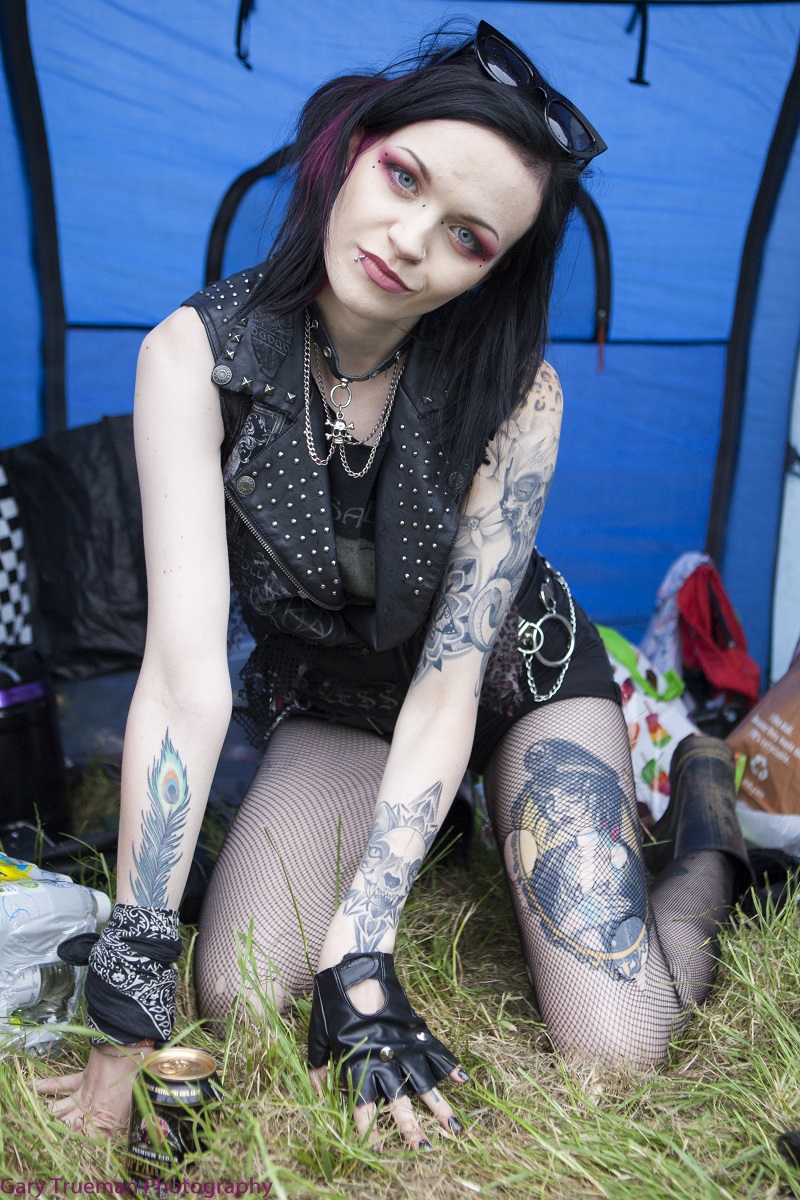 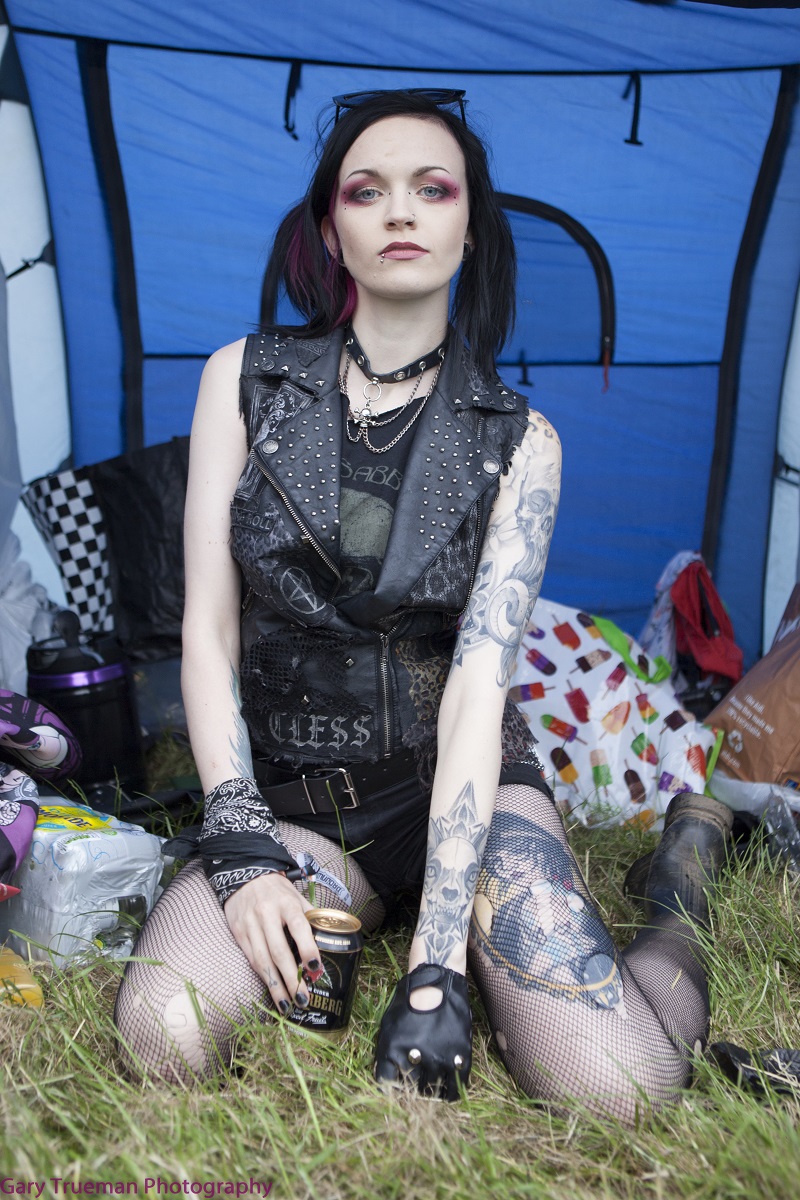 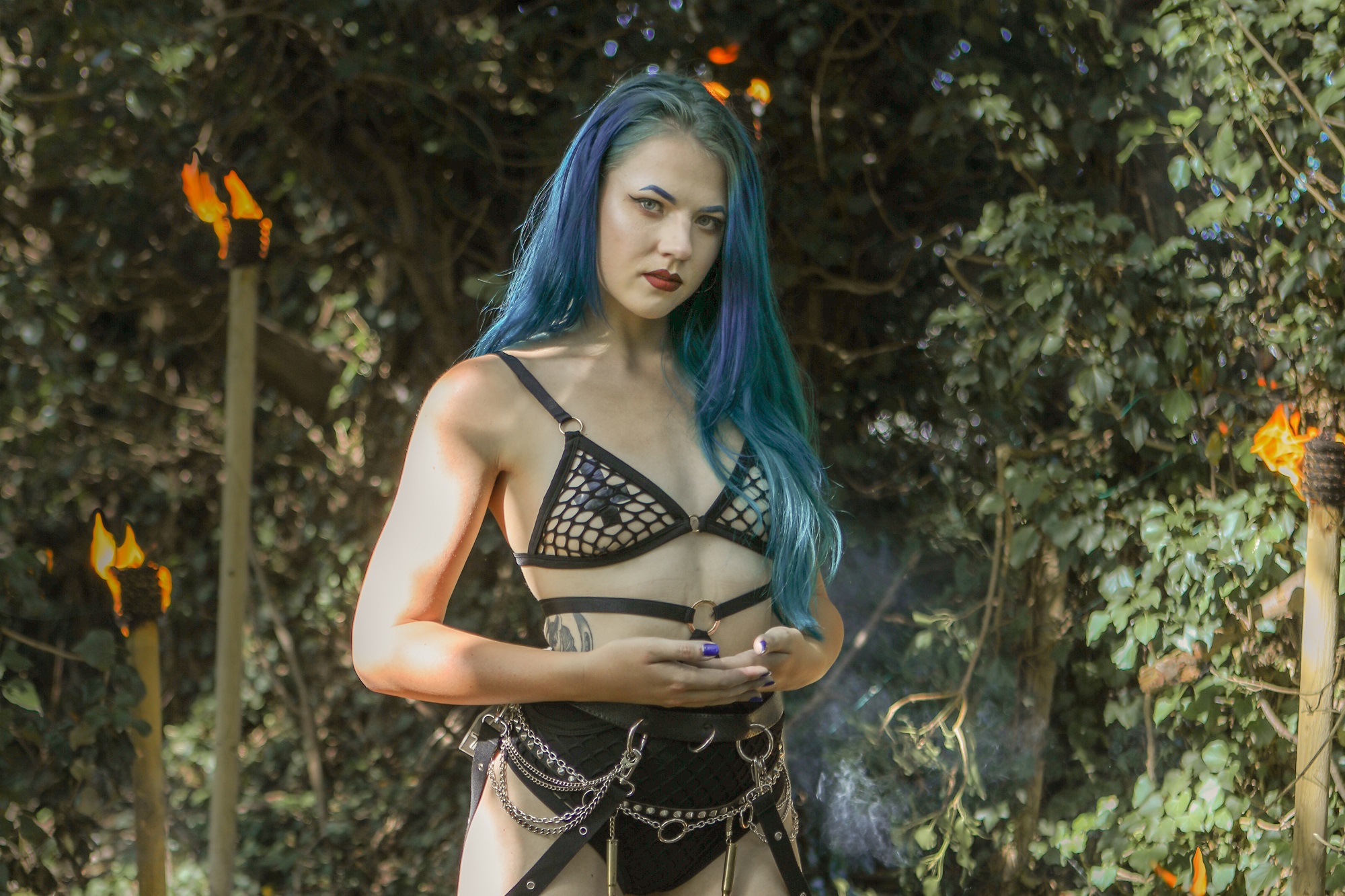 Interview: Missy Von Curse “The thing that freaks them out the most is when I say I can swallow a sword.”

Interview: YouTube Influencer – Emily Boo “I love to give back, I’m always very aware that my followers are the ones who have got me where I am. I’m so appreciative.” 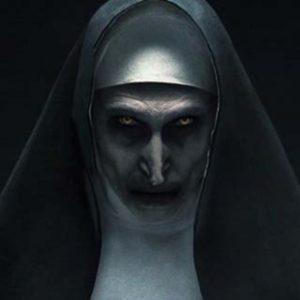 As we sit in the middle of 2018 contemplating summer holidays or what wellies to bring to the next festival, there is a breed...
Copyright 2017 Devolution Magazine. All Right Reserved.
Back to top