The Hyena Kill are turning a lot of heads at the moment. The Manchester duo have just released their critically acclaimed Spun EP which fused metal with a hint of something a lot more sedentary. They had a packed tent for their set at Download and Gary Trueman got to have a chat with Steven and Lorna not long after they left the stage. 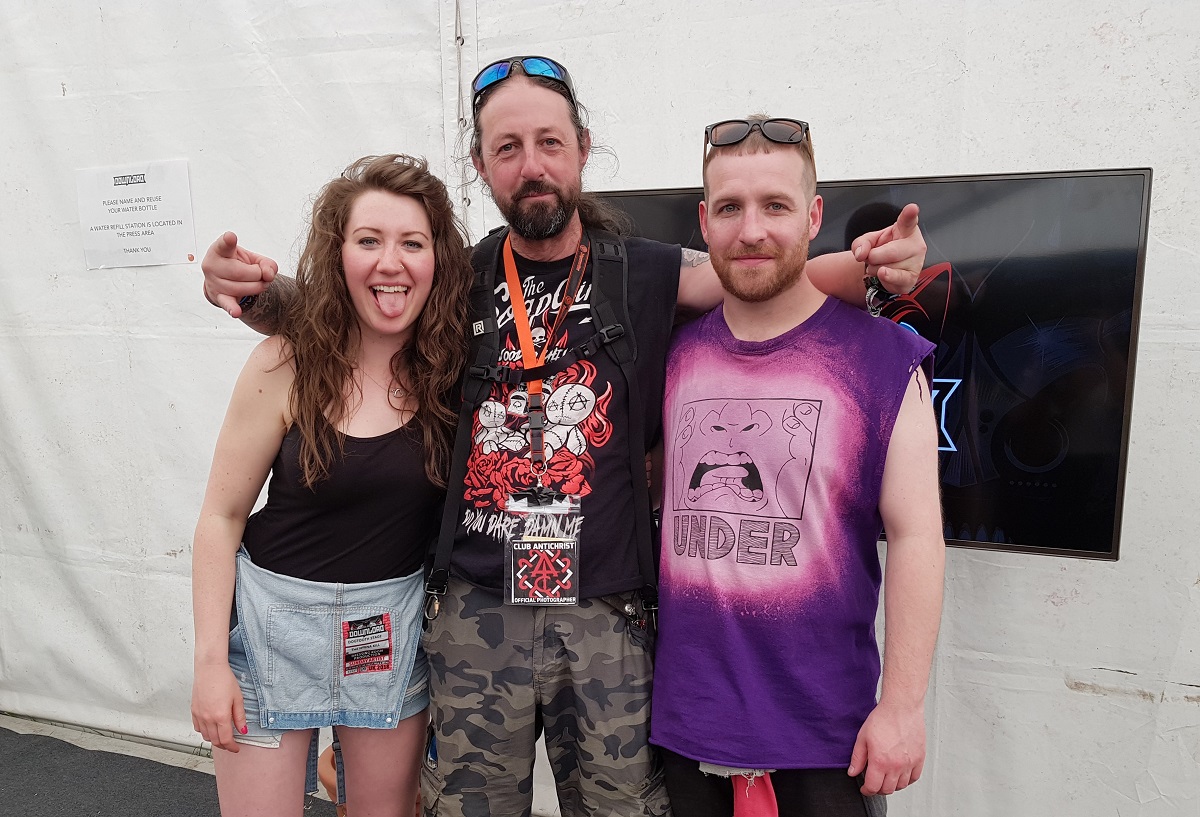 You’ve just got a new EP out?

“It’s called Spun.  It’s the best thing we’ve ever done, we put literally everything into it. All our money, all out souls. We worked so hard on it. To listen back to it and it’s like aww! There was that moment when we thought fucking hell this sounds brilliant.”

It’s Chinese whispers with The Hyena Kill, people saying check this band out, word of mouth. Does it feel nice that people are saying that?

“It’s been like that for years. We’ve been on the noise rock DIY team for quite a few years now and it’s just started to build up more and more now. We do find it’s been like that and the turn out to shows have been getting better. The response to the record though has been really good. More so from the people that like that kind of music rather than press wise. The main thing is that it’s the people that are into the music, the fans.”

The production is very strong.

“The production is phenomenal. Andy Hawkins, he’s done Hawkeyes and Black Moth and he was perfect, he just let us do what we do and didn’t interfere.”

The EP almost sounds like it was recorded live or in one take.

“It wasn’t but that’s the beauty of Andy’s production in that he captured what we are as a band. He knew exactly what we were doing and wasn’t trying to pull the wool over anyone’s eyes, so he just captured what we do. He knows his shit and captured the guitar sound really well. He made Lorna play to a click and she doesn’t like playing to a click but it was a good thing. He pushed us so hard the bastard, and he won’t mind us saying that. He made us work so hard but then he pulls the track up and cranks it. He’s a ball buster.”

When you played today on the Dogtooth stage, there was quite a few drummers from other bands in the crowd watching.

The music scene is becoming more fan driven and less label driven. People have an easier time of choosing what they listen to. Do you think that’s really opening things up?

“We’re on a label which is quite underground and fan driven. I agree that it is. The Noise Rock team that we’re in is only driven by fans. They’re the ones who are talking about you, not anybody else. They’re the ones that are getting out to shows and it’s a good thing. It’s the only way bands such as us can progress. We’re still extremely DIY and the people that come out to our shows love that. They love the fact that you’re so involved in it. They stick with you because of it. Once we make a fan we don’t lose them. We’ve got them for life and they buy the records. It was really nice when we got announced for Download and they were so happy and that made us even happier. Two noisy oiks from Manchester haha.”

We have to touch on the fact that there’s two of you and not three or four. You have a rhythm section all contained in the drums and then you have the guitar and vocals. How does it work for you two, you must have to be near psychic?

“We’ve played together for so long but we were a three piece when we started out.”

“We’ve worked really hard on our sound. When we first started as a two piece we didn’t have a clue. We had a bass player but he left and what happened was the drumming opened up. It had to go into the gaps where the bass had been. We’re a different breed of band.”

Lorna, you sound like you play with almost some jazz techniques in there to fill in for the bass?

Lorna: “I’ve actually just started taking some lessons, I’ve only ever had a hand full and I’ve been playing for 15 years. I started taking some just to make me listen to some jazz. It’s something to kick me up the arse when I’m just playing the same rhythm.  After two or three lessons my playing has been enhanced.”

What have you got coming up?

“We’ve got a couple more gigs then we’re just going to chill for the rest of the summer. We’ve got so many more tunes already written so it’s about moving on to that next. It’ll be a lot more on the ambient side that we touched on with Spun. We’re going to explore that a little bit more to create a bit more of a soundscape with just two people. Lorna might have a sing as well.”

“We didn’t expect that may people to come and watch us. In our eyes we’re a really small underground band. The turnout was amazing. We’ve played better but never with so much intensity.”

“Do not throw up in your porch. If you’re going to go for the five days take loads of speed and drink loads of vodka and you won’t even need a tent.” 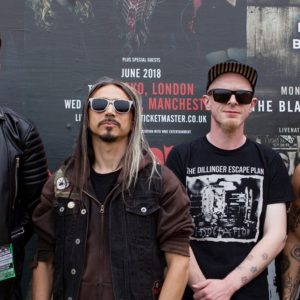 Death Blooms are a Liverpool based metal outfit that represent the very best of cutting edge music. So much so that none...
Copyright 2017 Devolution Magazine. All Right Reserved.
Back to top