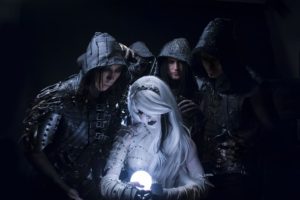 September Mourning isn’t just a band, it’s a trans media project that encompasses music, comic art, dance and theatre.  The character of September as a human/reaper hybrid has captured the imagination of many, her power and her fragility, her complexity and her internal struggle are things that many can relate to.  Here then is the next chapter in the Story of September…………… ’Til You See Heaven

Devolution magazine has always admired the work of Emily Lazar aka September and it was a pleasure for Gary Trueman to have a chat about the video, it’s meaning within the story and what plans she has for the future.

The theme of the video is September taking the soul of the ballet dancer and absorbing his ability.  There’s a lot going on in terms of how moving it is.  It’s beautifully shot and isn’t your typical rock video, it’s much more subtle.

“It’s very much more like an art piece than a rock music video.  We wanted to show a different side to the character because she’s a human reaper hybrid.  When you tear a soul from a body it’s a very harsh thing to do and we wanted to show this side of her that does it in a very gentle way, in a caring way and how she sees these souls as precious things and puts value on them.  The other reapers just come and take them.  It’s more of a character build during this video.  She’s expressing her humanity.”

“It’s my friend Korey Fitzgerald and he does all different styles of dance.  He does hip hop and pop and jazz and ballet.  He’s a well rounded dancer.  I used to dance with him in New York doing music videos and things like that.  So I knew him from that part of my life and we’ve been friends since then.  We stayed in touch and then he moved out to LA and I asked him if he wanted to do something really weird and cool and we ended up going back into training with each other.  We choreographed it ourselves and came up with the concept ourselves and put it together.”

It’s a beautifully shot piece and it’s nice to see a story being told without some ego taking over.  A lot of band members would want to be the lead person and yet in this yourself and Korey are like equals in terms of the filming.

“I think when we get more into this storyline, and we are delving into it more now, we’re going to be taking the comic book and bringing it to live action.  I’m writing a series based on the comic book and that’s very exciting.  As I’m doing that I’m realising that the characters, the souls that she takes, are also main characters in the story.  It’s not just her story, it’s the story of everybody that she takes.  It’s becoming interesting how the story is becoming very equal among the characters.  It’s not ego driven on one character and we wanted to show that in the video, that the souls that she takes are just as important as she is.”

You’re obviously trained in ballet yourself.  Were you very young when you started to learn to dance?

“I started when I was four years old, I was four years old when I put on ballet shoes and I got on stage for the first time.  That was a very special part of my life.  Then when I was about twenty years old I was doing it professionally but then I had a really bad accident and I couldn’t continue professionally.  I could do it for fun and for music videos and things like that.  Ballet is so brutal on your body.  You don’t realise it when you watch it because it’s so pretty and fluid but it is so hard on your body.  Ballerinas are like ninja warriors on point.  It’s a crazy way of life.  It taught me a lot about work ethic, to be driven and never give up.” 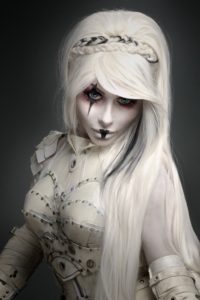 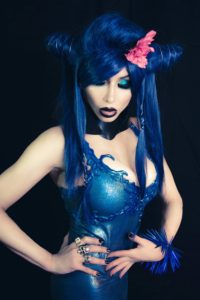 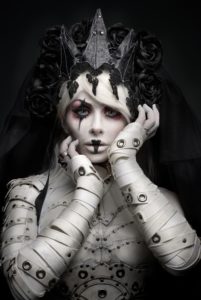 Have you always kept your dancing and ballet skills honed?

“Yeah, I always kept doing things even if it wasn’t ballet it would be modern dance or jazz or hip hop.  I’ve kept in the sphere of dance my whole life.  It’s always been a part of me.”

What was it like to bring classic dance to a rock audience?

“It was a weird thought in my head, but I never knew how to do it.  I think the character that I’ve created gave me that window to explore that art form and bring it to life through a harder edgier music.  When we did the video we didn’t want it to be cheesy we wanted it to be interesting and artistic and I think it worked out that way.”

Well we’ve had crossover music over the years, things like rap metal, but you’ve brought that to art, you’ve made it a visual crossover.

“Yes it’s a crossover in a visual format.  The project is visual in its own right so it dictates that.  It dictates delving into other forms of art and presentation.  When I started this project I was devoted to making it just as visual as it was musical and combining those art forms.  I’m pursuing that in every way possible and that’s just one of those ways.”

‘Till We See Heaven is effectively the final act of Volume II, how long before people get to know what happens next?

“We just started writing for Volume III and the comic book is being written right now.  The third issue of the comic will come out before the end of the year and then the fourth issue probably at the start of next year.  We’ll probably have a new single out in the fall or winter time with an album drop early next year.  It’s progressing very quickly, we want to keep everybody entwined in the process and in the storyline too.  We don’t want to drop the ball now we’ve gained a lot of momentum and people are starting to take a lot of interest in it.  That’s very exciting for us.”

So tell us more about the comic book.

“We did the first issue then we did the second issue early this year, we put both of them out together in a graphic novel and that went into actual comic book stores.  You can buy them in comic book stores now all over the United States and the world that sells Top Cow comics.  It has a beautiful cover, it’s the Mark Silvestri cover and he is just brilliant, he’s the greatest of his generation in comic book art.”

He’s been likened to the great Stan Lee in terms of talent hasn’t he?

You’ve been touring pretty much non stop for a couple of years and have built up a huge fan base as a result.  What’s your next step, more touring or writing?

“Yeah we have another tour and when we get back to LA we’ll be writing hard and we need to get another single done to get another piece of the story out before we go back out on tour.  Twenty Below was a great song that honed our sound towards a pop aesthetic and we want to explore that a little bit but bring in some heavier elements.  It’ll be interesting.  I’m really excited to write.”

You played Download in the UK plus a handful of other shows.  You’re developing a significant number of fans there.  When are you coming back?

“We definitely want to, the big thing is timing.  We need the right tour to bring us over.  We’ve been offered a couple of festivals but we just want to do a leg, like a good couple of weeks and not just come over for one show.  We want to come over for a period of time so we can really meet everybody and cultivate that fan base and show everyone what we have in store for you all.  Our headline show is cool right now, we do animation of the comic book between songs, we tell the story on stage….it’s a show.  Everyone that’s seen it loves it.”

September is a figure of empowerment and redemption, do you find the lines between her character and your everyday life sometimes become blurred?

“I totally believe they do.  I think September is basically me but with different characteristics of myself magnified.  A more supernatural format, that’s what my personality would be.  It makes it very easy for me to write.”

Do you think that you’re showing that everybody has that within them?

“I definitely think that.  I get Facebook messages and online messages about people reading the stories and coming to the shows, listening to the music and the words and using it to figure themselves out a little bit.  Their strength and their weakness and what they want to focus on, taking that negative space and giving it something positive.  I think one thing that music should do for you is empower you.  There’s lots of different things that artists do with their music and for me it’s empowerment.” 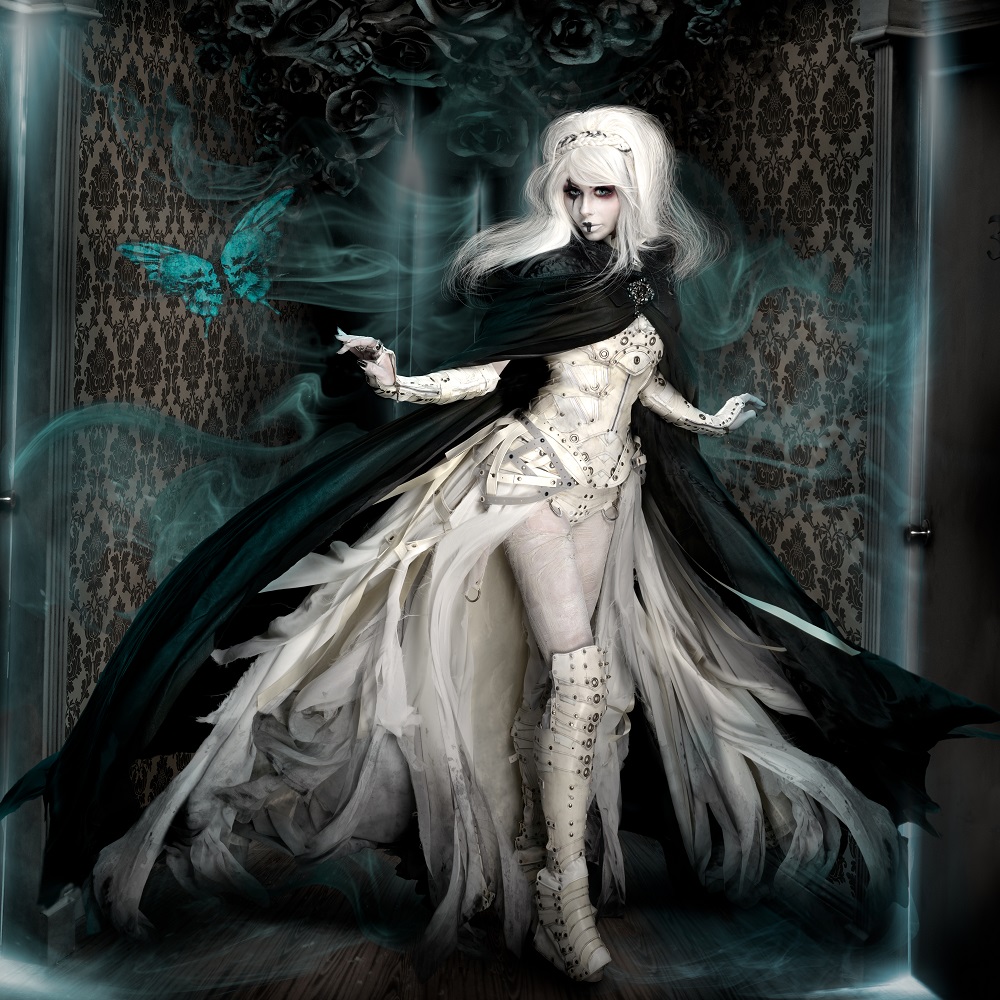 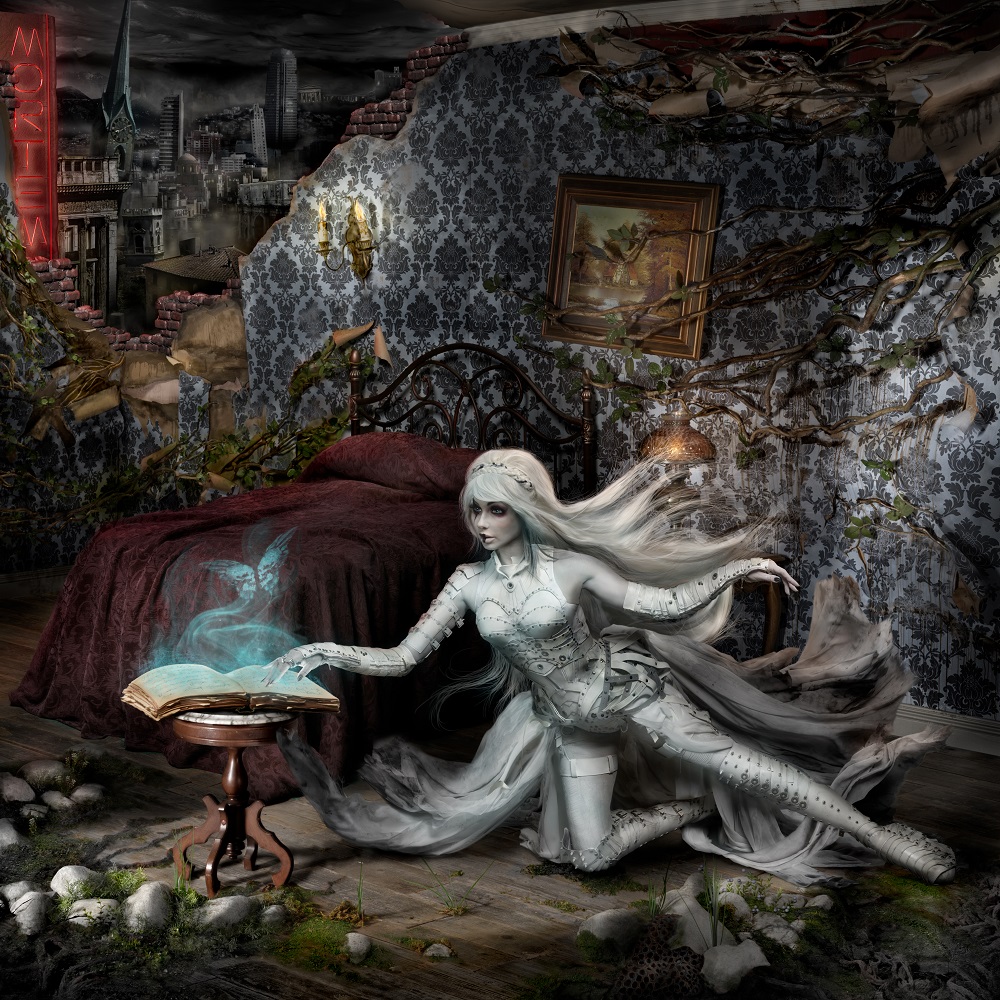 September Mourning will be on tour with Xandria and Kobra And The Lotus in the US during September and October.  Tour dates as follows. 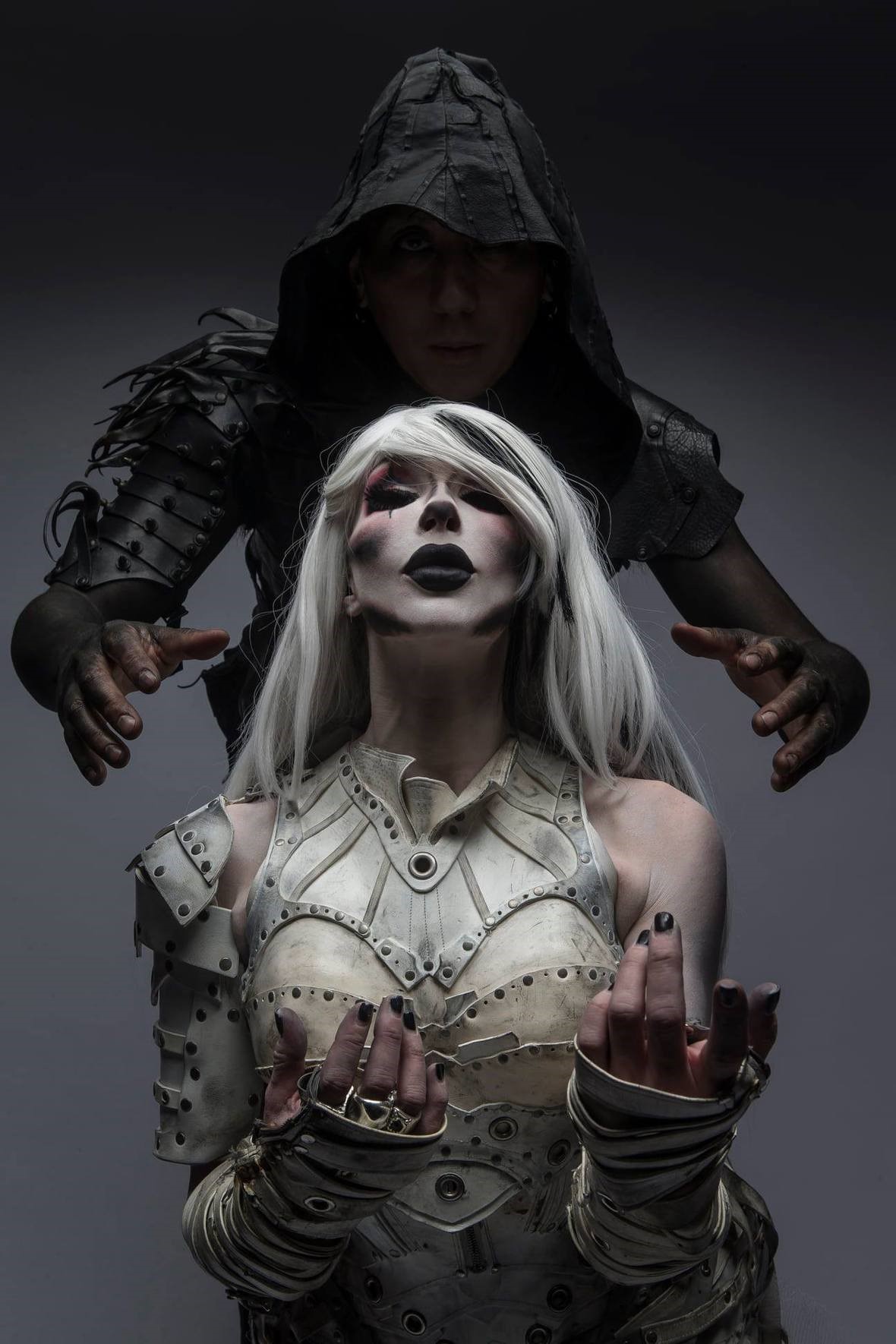 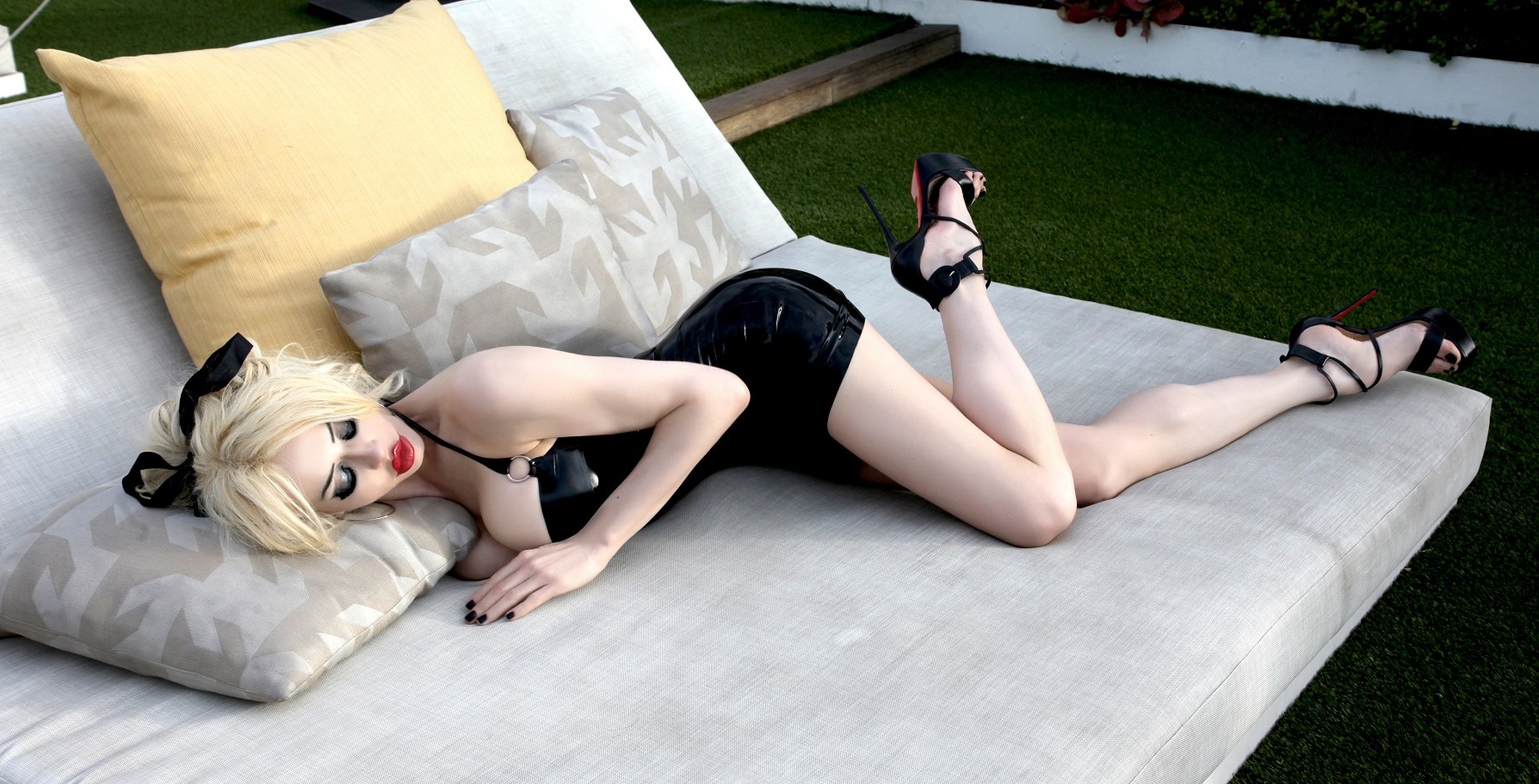 Interview: Emily Lazar (September Mourning) “This is a great time to really do some work on yourself.” 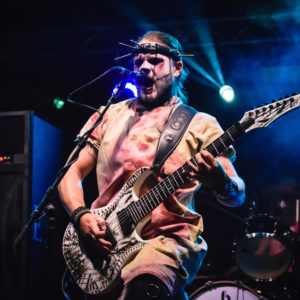 Amplified Festival 2017 With so many festivals failing in their first year it’s a true testament to festival organiser...
Copyright 2017 Devolution Magazine. All Right Reserved.
Back to top