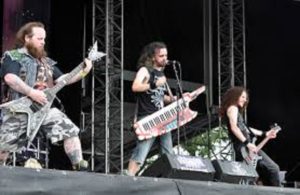 The shocking revelation that pirates actually drink gin, the catchiest sing-along of the festival and their fastest selling album to date. All in a day’s work for a pirate metal band. Mark Bestford caught up with Elliot Vernon from Alestorm.

Who can drink the most?

“Our drummer, Peter Alcorn, he drinks the most because he’s Irish. We don’t notice, he doesn’t really get drunk or pass out, but Whiskey all the time.”

The band has evolved between albums, how much has that influenced the direction of each album?

“Well we have a different line-up nowadays, we have a new guitarist which really influenced the writing, because even though the new guitarist didn’t write any songs he influenced what we could write for him, so we wrote a lot more complicated solos, complicate riffs and sections, just cool shit. Having more talented people in the band these days is just great for song writing, great for shows and everything gets better, so it’s nice.”

The latest album has just been released, it’s already the highest charting album you’ve had in at least 3 different countries. How does that feel?

“It’s great, yeah. We’re just very proud of it, the album is just so focussed, we’ve taken everything we like about our sound and made it better, and cut out all the crap that was holding us back. There’s no really slow boring bits anymore, or no serious stuff. It’s all just fun, all just party music, so it’s great.”

You’ve managed to scrape the barrel for a fifth album, is it getting easier or harder to write pirate metal?

“It’s exactly the same, we just like writing cool songs, the music’s always easy to write. Well not easy, but we don’t have trouble thinking of new stuff, like we’re still very in the zone for that kind of thing. Lyrics maybe get a bit more tenuous, like the pirate connection is sometimes a bit more abstract, but it’s always been like that. It doesn’t really matter what our songs are about, if you mention the word pirate then people think it’s a pirate song. We just write good music about having a party,”

“Well the song on the new album is about tequila, I guess. Gin would be a good one, maybe the next album will have a song about gin. One of the songs on this album had a working title about gin but we changed it to something else. Gin’s our drink of choice these days, we’re bored of the rum.”

The song Fucked With An Anchor, when writing it was there any particular person in mind, or was it just for the catchy lyric?

“Well we realised that our most popular song of all time is Drink, which if you listen to the chorus, it’s just like if you go to an English football match, and all the fans on one side are like ‘rar, rar, rar, you’re all dicks and our team’s better than your team’ and all that sort of thing. And we just wrote a song that’s like ‘fuck you, you’re a cunt, and the referee’s a wanker, with an anchor’, in a major key, we wrote it on a grand piano, you know, it was great.”

What was it like actually hearing that song being sung back to you on stage today?

“Well today’s the first time we’ve actually ever played that because this is our first show since the album came out. It was great, when we were sound checking before the show people were singing it to us just like while we were setting up, so we realised then that this was going to be a song that people want to hear. It’s great, we were a bit nervous playing some new songs today but it all went well, everybody liked it. Everybody knows all the lyrics already which is great, so we like that.”

So you reckon that’s going to be a long term addition to the set?

“Probably have to be, won’t it? Sometimes we do play festivals where they do say please don’t swear, so I don’t know what we’ll do with that one on those occasions, but we’ll find out.”

“Yeah, or we’ll just do the dog version or something.”

Are there any regrets with becoming what is probably the most well-known pirate metal band of today?

“No, it’s all good. We don’t regret anything. We don’t live that way, because we just do what we want and it always seems to work out fine, so no regrets.”

Did you ever think that you would ever be bigger than Running Wild?

“I hadn’t even heard of Running Wild until I joined Alestorm. People used to talk about them as if they were the original pirate metal band, and I listened to it and it’s a bit dull, so no.”

The music is certainly fun, is that the main driver for Alestorm? Just to have fun?

Looking out outside while you were playing you probably had the happiest circle pit I have ever seen in my life.

“That’s good, I hope so. Happy circle pit. Happy wall of death would be good, like everybody just runs and hugs each other, that would be a good wall of death.”

Interview: The Soap Girls "Clothes Don't Play An Instrument, I Do" 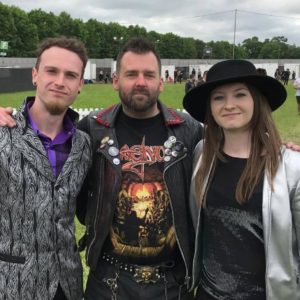 Rising like a phoenix from the ashes of Heaven’s Basement Aaron Buchanan has made an explosive comeback with his new band,...
Copyright 2017 Devolution Magazine. All Right Reserved.
Back to top