Interview: The Soap Girls “Clothes Don’t Play An Instrument, I Do” 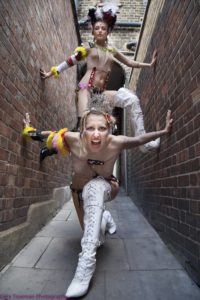 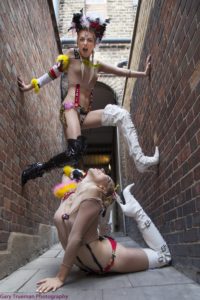 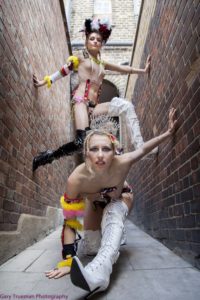 Freedom of expression comes in all guises.  The real freedom to be yourself, to not follow the pack and to live your life by your own rules can often come at a price paid in isolation and intolerance.  The Soap Girls have been maligned and pilloried for simply being themselves.  Now they’re getting recognised for playing great music, and that same individuality that saw them attacked is also the thing that makes them stronger, that makes them a force to be reckoned with.  Gary Trueman spoke to sisters Camille and Noemie  who chatted collectively most of the time as only siblings can. Topics included misogyny in music, their unique style and the best and worst each other has to offer.

“Necessity breeds creativity so DIY.  A lot of the time especially on the last tour we ran out of clothes so we just had to paint clothes on.  This time we haven’t done so much paint but we make clothes out of curtains, recycled clothing.  We ask fans to bring shirts, we meet random people and say hey can we have your shirt?  We like to recycle things and be unique.  Maybe it’s inspired by The Mighty Boosh or the B52’s.”

Is there anyone in the fashion industry that you admire?

“Vivien Westwood is cool, she doesn’t give a fuck.  We like people like that because you know you’re getting what’s honest and true.  Jane Fonda in Bararella, those outfits are so cool.  If you walk in to Tescos and no one looks at you then you know it’s a shit outfit.”

You’ve attracted a lot of attention because of your stage outfits as well as your music.  Do you think that’s a good thing or a bad thing?

“Oh a good thing.  People don’t often go out for music now, they prefer to go home and listen to it.  They go to a show because they’re going to be entertained and maybe they’ll fall in love with the music afterwards.  It’s like musicals, it’s the music and the outfits.  Most of the bands I love it’s to do with everything, they’re entertainers.”

So it’s as much about the show, about the entire performance?

“We have fans who don’t often get to see what we wear, we have blind fans too.  It’s all in the performance.  Obviously without the music there would be no story, we wouldn’t be able to put it across the way we do.”

So from a performance point of view are there any bands in the UK that have caught your eye recently?

“We love The Virginmarys.  The thing we liked about seeing them was that they were just so raw.  Although we haven’t seen her live Vish from Pretty Addicted, we like her style, she’s really cool.  She’s fearless which is good.”

Something that happened quite a while ago now, down in Hastings.  You had fake blood thrown on you in what was an appalling act actually encouraged by the people that ran the venue.  Has anything happened in relation to that?

“The venue got closed down.  We’ve never had such a shit experience.”

Camille: “I still have anxiety if I’m on stage and someone approaches I’m still scared.  I still have issues from it.  If anything good came out of it it’s that fans and other people can see that even if people throw shit at you you’re going to carry on.  The thing that really helped us through it was the support we had from people.  It was really sad though because other bands, especially female bands messaged us saying they’d had abusive experiences at that venue.  We were never given an apology, in fact the owner felt justified in doing what he did.  He still came out and said we were sluts and we are damaging the feminist movement.  To this day he thinks he did right. “

So following on from what happened to you how do you think things have progressed from the 70’s and how bands like the Runaways were treated and how women in music are treated now?  And also the treatment of women artists at say Rebellion festival where there is a much better gender balance?

“Depending on the genre, punk has made a huge place for women and it’s progressed so much.  Often in rock if you do acoustic music as a female you’re never questioned because you’re not trying to get onto a stage with men and take over.  But when you’re doing rock music……often we’ve been to a venue and they see us carrying guitars and they ask where the band is.  The other day in Grimsby there was a guy from another band who was laughing at the notion of us playing.  He was crying with laughter.  Were like OK you’re going to get shat on on stage.  You do get some places where people are very open minded.  Unfortunately if you’re female and dress a certain way like us, very evocative , to us it’s not sexual but we can’t control other people’s thoughts.  If you dress safely you get less shit.  Women in bands sometimes tend to be very unfeminine as a protective mechanism.  When you look angry and rough you’re not going to be questioned but when you look feminine suddenly you can’t play.  They ask us why we wear these clothes but they’d never ask a guy that.”

Camille:  “I’m a nudist and I hate that the human body is reserved almost exclusively for pornography and sex.  When I’m on stage I’m neither male nor female.  I’m sweating my arse off rocking out.  Our outfits help because it’s too damn hot to wear anything heavy.”

Noemie: “Clothes don’t play an instrument, I do.  What I wear doesn’t affect the music.”

Do you think some women in music view other women as competition rather than allies?

“Yeah, which is really stupid because everyone is different.  It’s just like comparing yourself to another human being, your not the same and you never will be.  You need to embrace the fact that you’re different, and rock it.”

So how would you describe your music.

“Revolt rock.  A lot of people say it sounds grunge, some say it sounds punk, we get hard rock.  Some people even say it’s pop.  For us it’s just a mix of everything.”

What do you listen to that influences what you write?

Camille: “We have very different music tastes.  I like angry melodic and she prefers more sad melodic.  It’s all about melody.  The guitar and the bass and the vocals all need to be singing.  The only common ground between us is grunge.  We love L7, Alice In Chains, The Melvins…. and Napalm Death even though it’s not like out music.  We like old music.”

You’re from South Africa.  What’s the music situation like there?

“The UK has so many more bands.  The metal scene is pretty big in South Africa.  They also have Gweta which is African or black music and there’s Afrikaans music .  It’s very divisive.  It’s very sexist too.  In the UK you’ll see women truck drivers and it’s like holy crap because in South Africa you won’t get that.  They still think females can’t do anything. “

You’re sisters. So let’s hear the very best and worst things about each other…..

Camille: Besides her smile which is so sweet I love her guitar work and when she starts playing I immediately get a song in my head.  She’s creative and you can rely on her.  She’s a cheeky devil.  The worst is you need to piss every fucking time we need to go somewhere and you hog the bathroom for hours….and you put glitter over everything.

Noemie: “She makes a really good sandwich…haha I’m joking, the best thing is that no matter how shit a situation is she’s like come on we’re going to do this.  She’s determined, the pusher in the group.  I wouldn’t be able to write songs without her.  When she’s on stage it’s like watching a fish in water.  The worst thing about her is she’s sometimes too sensitive, and also when she gets drunk”

The Soap Girls are playing Rebellion festival on Thursday 3rd August and will be performing both electric and acoustic shows. 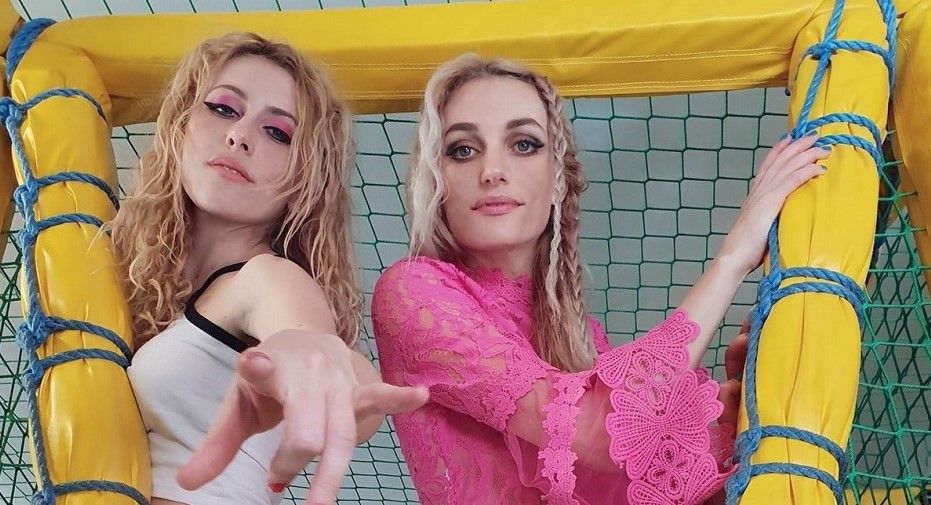 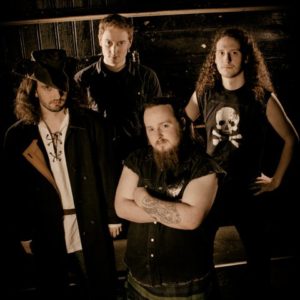 The shocking revelation that pirates actually drink gin, the catchiest sing-along of the festival and their fastest selling...
Copyright 2017 Devolution Magazine. All Right Reserved.
Back to top