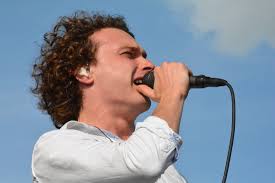 Rising like a phoenix from the ashes of Heaven’s Basement Aaron Buchanan has made an explosive comeback with his new band, the Cult Classics. Mark Bestford caught up with Aaron, and his sister Laurie, before their show at Download Festival.

How does it feel being back on your own?

Aaron: “Probably better than ever. I think this is, it’s a weird departure from a band that was doing so well at the time, but to be able to come out and have complete control over the way the show is presented, and by saying control as well I mean working with a group of people who I feel are in control of their own ability to interact with an audience, is the best thing ever, and it’s nice to have a new album out. The Man With Stars On His Knees came out on May 26th, it’s out on all the public forums, very, very exciting.”

You toured with InMe back in October, what was it like touring with your own band?

Aaron: “It was really, really good. Again, this is the first time I’ve been out on the road ever with my sister Laurie, and the first tour I’ve actually put together with the Cult Classics and it was a great first stepping stone, that’s the way I would describe it. Because we’ve got a tour later on in the year with a band called Life Of Agony, middle of September time, just after my birthday which is a bit of a bummer because I would love to have a drink and a little smoke, but that will not be happening until after the tour. But yeah, it was very, very, good. What do you think?”

I’m guessing this was your first tour?

Laurie: “Yeah, we did the InMe tour back in October, but it was a little warm-up run you could probably call it, but the Life Of Agony tour will hopefully go onto bigger and better things.”

Your touring schedule with Heaven’s Basement could only be described as insane, is maintaining a work/life balance much more important to you now?

Aaron: “The work that I do is the band, I don’t have a job anymore. Basically, after I finished with that I went away, got the money together that I needed, and then we put this album together. And as you said, the touring schedule for Basement, doing the music that we were doing, was hellish in the latter days. It’s very difficult to keep up with the demands of that lifestyle doing the style of music that we were doing, because of what it does to your voice. That said I haven’t written an album that’s any fucking easier. The Man With Stars On His Knees is particularly testing for my capabilities but I don’t like pandering towards things that are just easy. I think it’s important to show people, and I want people to hear a bit of a struggle. That album is solely written about struggle, and contempt, and not being in the happiest place in your mind. So, this is an odd thing to say about your own record, it’s dog-eared, it ain’t perfect, it ain’t pristine, but it is fucking rock and roll.”

The vocal style on the new album is a lot different to your old stuff, do you feel you’ve matured as a singer as well?

Aaron: “I would like to think in all the years that I was with Basement, and through to now, every time we do a show and every time we would do a new release is a maturing of a character. You see it with the likes of your David Bowies and your Scott Weilands, and you see these people when they’re very young, like the likes of Annie Lennox and Steven Tyler as they grow up into their middle-aged sort of period. I think it probably takes you 15, 20 years to get to a place where you are excellent and I would say right now that we’re good and I’m happy with where we’re going and where we’re headed, but there’s a whole bigger picture, I’ve got a whole 10 year game plan with this thing. It goes far beyond what anyone can see right now, super exciting.”

Now you’re not touring quite as intensely as you where do you find time to do anything outside of music?

Aaron: “Well I decided to go and buy a boat.so I sit on that a lot and I cruise up and down the river and drink a lot of Suffolk cider. So there’s a lot of work that goes into the band, but when I’m not with Laurie working on the likes of where are we going to get our next album out, where are we going to produce our next ep, when’s the next gig going to happen. There’s so much to do, but when I’m not doing that generally I just sit down and chill and collect myself ready for the next onslaught because being in a band it’s 100% on or it’s 100% off, and it’s start, stop, start, stop, there’s no in-between. I think that’s kind of the lifestyle that I’ve grown up with, and the lifestyle that I like leading now. It’s an oddity.”

The album seems a lot more experimental, has going solo allowed you to express yourself more in your music?

Aaron: “Definitely, this album is 4 people in one room and we tracked to tape, which is something I always wanted to do, a lot of people say that tape sounds better, it sounds different. I wanted a different sounding album being compared with everything else that’s being released right now. It’s certainly allowed me to express myself better because I didn’t have the pressure of a record label telling me what to do and dictating that I needed to have X amount of singles and I didn’t have a band saying well we’re not really sure we don’t really to feel about that. When we got into the studio I spoke to everybody, and because at the table there was 4of us, James Curtis Thomas is my oldest friend, obviously I grew up with Laurie, we came out of a womb together, and Ryan, I’ve known him for nearly 10 years as well. So there was a collective friendship energy there, and they were all happy for me to take that creative flag because they’d seen the success that we’d had, you know, that I’d had previously and they were like well there’s obviously something there, and as well I want to see them succeed, it’s not just about me succeeding. This is a team effort and just because my name’s on the tin, that means shit. The Cult Classics is a collection of people and it’s not just a band, it’s the people around us, and I love them.”

There are lots of nods to classic rock throughout the album, who would you say have been your biggest influences?

Aaron: “I think on this record, Scott Weiland, Eddie Vedder, Chris Cornell, obviously everybody knows I’m a massive fan of Freddie Mercury. I mean Skunk Anansie, Alanis Morrisette, even a bit of Imogen Heap. There’s some Pantera in there. There’s a lot of 90’s, very, very late 80’s, we’re talking like 89 onwards, inspiration on the record, and I think that’s probably the reason that it sounds a little bit more unique to what a lot of bands are putting out at the moment. And there’s a lot of bands flying the 80’s flag at the moment which is something I’m not interested in personally, and there’s a lot of bands that are producing music, everybody has the right to produce music, I think it’s great, but I get bored listening to the same song that many of the radio stations keep pumping out. You’ve got 10 bands literally writing the same song, with the same formula, I find it very boring. I wanted to do something different, I’m happy to fly the flag for something a little bit unique and eccentric.”

And yourself, have you put any of your influences into this as well?

Laurie: “Yeah, Aaron asked me when the demo phase of the album started, he asked me to come to the studio, just on a whim really, and just to listen to everything that was there, and to see what I thought of it. And when I was listening through it I was like, well I don’t like that, that bit doesn’t sound right, the guitar work on that doesn’t sound right, and he appreciated that and changed it and I think it’s almost like Aaron drew the picture and I coloured it in.”

Aaron: “Definitely, it was, writing music is not just about ego, it’s completely about allowing the people you respect creatively, like Laurie’s a great creator, likewise so is James Curtis Thomas, and so is Ryan Woods. There has to be like a mutual bow to each other. When somebody turns round to you and says, to me for example, ‘Al, that don’t sound right, do it again’, and so we do it again, and we’ll keep doing it until there’s a take he likes and then we’ll compare the 2 and we’ll be like which one works? And it’s black and white, like I wanted to work with people that creatively we have similarities with me, not the same, but similarities. Yeah as Laurie said it was much the case that I stencilled a record for people, and I had the demo, I wrote it on an iPad of all places, and then these guys came in and they helped colour it in for me. And they did a fantastic job.”

So now you’ve got the first album out the way, have you already started working on more music for the next one?

Aaron: “You know what, we were actually talking about that in the hotel last night. We have some pretty eccentric ideas, and one thing that I would definitely say about this band, some people are going to love it and some people are going to hate it. I don’t want the middle ground, I want hardcore followers and hardcore haters you know. In history we’ve had, like a lot of the Led Zeppelin stuff was brushed under the table by the media, but the fans ended up loving it. Luckily for us right now we’re in a great position, the media love it, and our fans love it and we’ve had so many people come from the previous bands we’ve been in, and the previous projects we’ve done that this album we’ve been exceptionally lucky with. But I promise you the next album will be very different.” 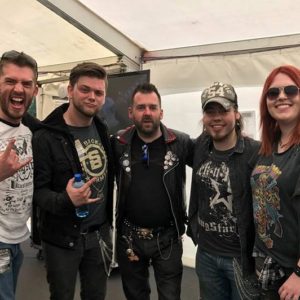 In possibly the worst case of bribery and corruption since the 2014 World Cup, Mark Bestford chatted to Stone Broken...
Copyright 2017 Devolution Magazine. All Right Reserved.
Back to top