Mark Bestford talked to brother and sister due Steph and Paul from the Irish alt-rock band Greywind after their packed out set.  Topics included playing Download as their 20th gig and growing up in Ireland.

Where did the name Greywind come from?

Paul: “Game Of Thrones. We’re massive Game Of Thrones fans and we always used to read the Song Of Ice And Fire books and one night we were talking about band names and we walked into the kitchen and I have a t-shirt with all the dire wolves on it, like Summer and Grey Wind and Steph said Grey Wind out loud and we both looked at each other and like yes, throw the words together. It just suits our music, it’s a dark and beautiful name so we thought it would be perfect.”

You’ve just played the Maverick Stage. What was it like looking out and seeing a full tent?

Steph: “It was so surreal, because it’s our 20th show that we’ve ever played, so to have that reaction at Download, one of the biggest festivals, is crazy.”

Paul: “Yeah, for our 20th show and to walk out and see a packed house is amazing.”

Paul: “It’s surreal, because we grew up looking at these bands and dreaming and watching highlights of Download and Rock am Ring when we were younger on MTV and seeing all those bands. So now to be a part of it and seeing our own crowd for us and singing back our songs is incredible.”

Growing up in Ireland then, what music influenced you?

Steph: “My dad really listened to Thin Lizzy and Queen and Black Sabbath a lot so we grew up around that and then my mum was a soprano so she just sings opera music, it was dramatic but dark, so I think that was how it influenced.”

Paul: “And then we got into the likes of Taking Back Sunday and Jimmy Eat World, but no band in Ireland were ever doing what we do so it was always we’re looking at the scene over here, being like away from it.”

It’s been almost 3 years since the demo of Atferthoughts came out, how important has that demo been to your music career?

Paul: “That was the first song we ever finished and it was the first time ever in a studio to record that song and we posted it online and it wasn’t to try and get signed or anything it was just like we want to, Because we live in the south of Ireland and we could never find other people to start a band so we were like we can’t wait anymore, we’ll just do it ourselves. So we just said we’ll record a song, post it online, and then the next day labels and Radio 1 started playing it so it was really crazy.”

Did the reaction to that demo take you by surprise then?

Paul: “We put that online and we’d never played a live show in our lives, it was the first song we ever finished. It doesn’t happen, like in this day and age you have to have like a hundred thousand followers or have a video go viral before anyone to be interested. So for us, 2 people from Ireland who have never played a show, to just post their first song online, we’re still shocked by it.”

From the first demo to the album release it seems like a really short time, by modern production standards, did it come easily to you?

Paul: “Yeah, it was like, I dunno, this is all we’ve ever wanted to happen, but then like because we could never find anyone to start a band so it was so frustrating, so as soon as we got like a little glimpse of interest from people the songs started pouring out of us, and we all play and wander so quickly and everything just fell into place.”

Last year you did your first big tour with Moose Blood, who are playing tomorrow, how did that tour go?

Steph: “Amazing, yeah. It was our first tour obviously so, and it was sold out so every night, going out to massive crowds, when it was our first time ever. I think it’s how we’re so kind of relaxed now because it trained us to be used to the biggness I guess”

Paul: “Like thrown in at the deep end, and now we’re kind of really relaxed about it.”

You certainly know how to work that stage.

You’ve just released a new single, Hear You Me, does this mean you’ve already started working on a second album?

Paul: “We might have a lot of it written already, that’s all I can say.”

You haven’t got much now until July?

Does that mean you’re free to enjoy the rest of the festival?

News: In This Moment have revealed their dark take on Phil Collins’ classic track, ‘In The Air Tonight’ in visual form 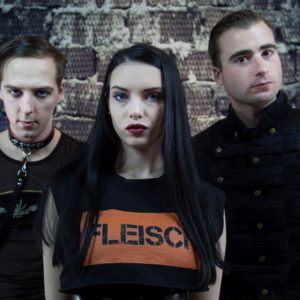 Northamton might not seem the obvious place to look if you want to find great industrial metal but the town has spawned...
Copyright 2017 Devolution Magazine. All Right Reserved.
Back to top