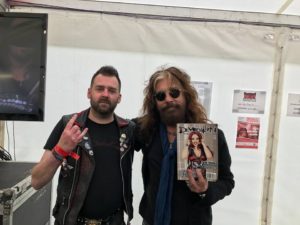 Mark Bestford talks to John Corabi about his time in the Dead Daisies, leaving Mötley Crüe, and the importance of music after the recent events at Manchester Arena.

You’ve just played to a packed second stage, did they bring the noise to you?

Last year you opened up the second stage on one of the wettest Downloads ever, what’s it like to be back for a second year?

“It was definitely cool. You know what, this is one of the legendary festivals anywhere in the world, you know what I mean. So, it’s always a blast to come over here, I love coming to England as well. We had a great time last time, and this time, the only drag is we really can’t wait to come back and do like a proper set. I kind of feel like we had the foreplay and I didn’t get to stay and finish the job, you know what I mean. But it was cool, we had fun.”

Does that mean you have thoughts for the future, coming back and doing a full tour?

“Hey, if they invite us, we’ll be back, you know what I mean. I would love to come back here to Download and do a full hour, or 40 minutes or whatever, we’ll see. We’ll see what the deal is.”

And how about for the rest of the country?

“We did a pretty extensive tour last November with The Answer, so after today we’re doing Scotland, Edinburgh Liquid Rooms and then we’re back off to Europe, we’re doing Japan, South America, America, so we’re busy up until November and then we start a new studio album. So, we’re busy.”

The band’s pedigree reads like a who’s who of rock royalty. How important has this wealth of experience been in forming the Dead Daisies sound?

“I think more than anything it’s, you know the thing that’s crazy to me with this band is the amount of ideas. Like each time we do a record everybody shows up with 5, 6, 7, 10 ideas. Even Brian, Brian’s an amazing guitar player. So we do everything, it’s a bit old school, you know we don’t… both Make Some Noise, Revolucion before that, we literally wrote, recorded, mixed and mastered the records in a month. So you know, that’s the thing about this band that I just find so amazing. It’s like not a lot of time, ideas are just flying, and we’re just starting to tour and we’re already looking forward to the record, so it’s going to be cool.”

So you don’t have any lead songwriters? It’s more of a collaborative effort?

“It’s very collaborative, we’re all together in a room. If I have ideas, everybody’s kind of chipping into them, Brian, whatever. And everything about this band is collaborative, the writing process, even the recording. It’s not where you know one guy’s doing his thing in LA and then they send it to me in Nashville, you know we’re all in the room together, firing away and it’s killer. I’ve never really been in a band that worked this fast and was this creative so it’s pretty cool.”

So many bands, they’re constantly working, is it difficult to maintain a stable line-up with that kind of band?

“I think it was in the beginning for this band. You know David started the band with a gentleman by the name of John Stevens and they kind of, for a lack of a better term, I think they kind of did things ass backwards. They went in, they wrote, you know, 25, 30 songs, hired session players for the first record and then later said well let’s take this on the road and you know, then they started asking friends to jump on for the tour and it was weird. Like, you know things sometimes look great on paper, but then when you get into a setting like travelling, being together for months at a time, sometimes there can be a little bit of friction. So, a few people have fallen off the wayside. But this line-up we’re getting along splendidly and Doug’s been with us now it’s like 2 years, so I think they’ve finally got to the point where okay, this is the line-up. Doug, Marco, Brian myself, and David.”

With the music industry today, how important is it now to get out and tour?

“Well obviously, you know the music business is much different than it used to be 20 years ago. I think the difference now is, you used to go on tour to let people know you had a record. Now it’s kind of flipped, you do a record to let people know you’re going on tour. So I think now it’s all about social media, not radio stations and MTV and all that stuff. It’s more about doing interviews like this and just being on YouTube and all that stuff so, we’re figuring it out as we go you know.”

You mentioned recent events during the show, how important do you think music is in bringing together communities now?

“You know it’s unfortunate that things are the way that they are but you know even in America we were very, very divided over our elections. And sometimes it got to the point where it was actually violent. And that’s the one thing, like, and I say this when we’re on tour in America, it’s great that you can have, you know, Republicans and Democrats, or Liberals and Conservatives, whatever you want to call them, all in a room together and for 2 hours nothing matters but music. So it can be cool, you know I’ve got this platform where I can tell people like, you know, there’s a lot of violence in the world. There’s a lot of chaos. You know what? Nothing gets resolved, violence with violence doesn’t really work. If you can talk, you’ll get way more done, you know. So I don’t like getting too political because I know people want to forget their everyday bullshit, you know what I mean, but if I have a minute to say what’s on my mind I’ll just throw it out there”.

Musically, when you were back in Mötley Crüe you seemed a little bit uncomfortable, but do you feel that you’ve found your spiritual home now with the Dead Daisies?

“You know, it was very weird, it was very difficult. Parts of being in Mötley were obviously easy. Parts were difficult because you were dealing with fans that grew up with Vince Neil, you know what I mean? Which is fine, I get it. I think I really learned a very valuable life lesson not joining Mötley, it was leaving Mötley. And, it’s when you have a situation like that, when you’re in a band like the Daisies, or Mötley, everyone wants to give you sneakers and t-shirts and guitars, you know. And then when the gig goes away, you find out very quickly who your real friends are. And I figured it out. And now I kind of, I love doing what I do, I don’t take myself that seriously and I don’t think anybody in the band does. And, I don’t want to say I’m guarded but I’ve kind of figured out now, like, not everybody that’s around me in situations like this is really concerned about John the person. They’re more concerned with John the singer of whatever band. Whether it’s Mötley, Scream, Dead Daisies, Union, whatever. So I figured out my life lesson leaving Mötley., So like I said, this is all awesome and wonderful, but I’ve learned to figure out what’s really, truly important, just personal happiness, you know what I mean.”

So with that in mind, what does actually make you happy now?

“You know I love doing what I do. I love travelling the world and still, I mean… without getting too deep or spiritual or whatever I just feel really blessed that I’ve been doing this, honestly, for nearly 30 years. And I’m still playing Download, I’m still able to put records out. So I just kind of feel blessed about that. I get to go home, I have an amazing wife, amazing kids and good friends, you know what I mean. So I’m good, life is good, life is awesome.” 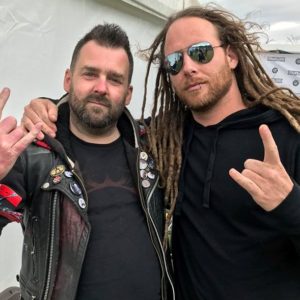 Mark Bestford caught up with Devildriver’s Mike Spreitzer to discuss how illness has made him healthier, his love of European...
Copyright 2017 Devolution Magazine. All Right Reserved.
Back to top