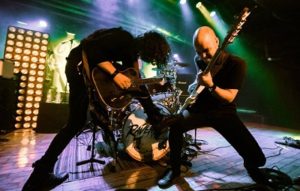 Mark Bestford caught up with Oli Brown, Aaron Spiers, and Adam Breeze of Britsh blues/rock outfit RavenEye to discuss touring, accidents, and their reasons for being in a band.

Oli: “Really good like it’s amazing, I think the first time we played Download I was humbled that we played there, it was a big opportunity and then this time we were like we’re going to own it, we’re going to just do what we do, like we belong on that stage. Yeah, we did that today.”

You’ve toured with some of the biggest names in rock and blues in the last few years, what have been your best, and worst, moments on tour?

Aaron: “My best moment was sitting in a private jet with KISS.”

Oli: “Which none of us did, because while he was doing that I had to piss in a cup to prove I wasn’t doing drugs.”

Oli: “Yeah, to the German police because they brought us over for no apparent reason. So I got pulled over and yeah, it wasn’t fun.”

Aaron: “The best and worst right there!

So, in between the EP and the album you’ve obviously got a new drummer, did that affect the direction of the album in any way?

Oli: “No, we recorded it at that point, I think what Adam’s done since he’s been in the band is had a direction to the live show. The way we play as a band, the weight of the sound has got a lot bigger and there’s a really solid foundation that’s made us a lot heavier and tighter as a unit because we work so hard together. We kind of went with the idea of no compromise at the rehearsals and we’ve just smashed it hard and been pretty brutal with each other really. The way we sound now is because of how us three all play together. It’s a trio you know, and we all need each other and how one person plays affects how everyone else plays, so it redefined it.”

With rock and blues influencing you obviously, who’s been your biggest musical influences?

Oli: “Jimi Hendrix is the reason I picked up a guitar and started playing music so him for sure, and then Chris Cornell for singing,  Soundgarden is like my favourite band of all time.”

Aaron: “Same for me really with Soundgarden and Chris Cornell. It’s probably something that we connected on, especially when it comes to writing and stuff like that. Pearl Jam, the grunge guys, we’re all massive fans of the grunge bands, I mean you like Foos”

Adam: “Yeah, Dave Grohl’s been a massive influence for me, drumming wise mainly. Song writing wise as well, but drumming has been the main, Taylor Hawkins, both, but yeah, the whole grunge era is something we all click to.”

You’re renowned for your stage antics, have there ever been any accidents on stage?

Aaron: “Always, every show there’s an accident. Some of the best stuff happens through accidents.”

Oli: “Yeah, there was today, I broke my guitar. Yeah, there’s always things that go wrong and I think that’s a blessing, we love it. Like, we love all the little disasters because it kind of fuels our fire to get a little bit crazy. Like when things stop working properly we’re like what can we do to make it work in a new way. No, we love it, we love all that. You know the un-predictability for us as well is as much fun. I think the worst time was probably for you, your stage antics”

Aaron: “That was an actual accident, a physical accident where I played maybe the second show with these guys and managed to rodeo a stage monitor off a seven foot drop, smacked my head. I got back up and played the rest of the show fortunately

So, what have you got coming up for the future then?

Oli: “Next week we go to Download Madrid, then we have a few days off before going to Lisbon supporting Aerosmith. Which will be an amazing trip for us. And then we’re going to do an American tour, so we headline our own US tour on the east coast, travel all around, whole month away there. Reading and Leeds as well, it’s going to be amazing to play those festivals. And then a UK tour, primarily in September, we’re going to do a UK tour again, and smash that market, it’s a big area for us. It’ll be good to return and do our own headline tour off the back of the KISS tour we just played and take those big stage antics to the smaller rooms and go nuts.”

Have you got any new music coming out at any time?

Oli: “We’re looking to recording at the start of next year, we’re writing all the time and we’re kind of throwing some new song ideas in the set as it is but we’re kind of saving it a little bit because now we’ve got enough songs to play and we haven’t played all the songs yet. I think we’re thinking about saving the new material for release day, like just smash everyone new songs when it’s all done and just surprise everyone kind of thing.” 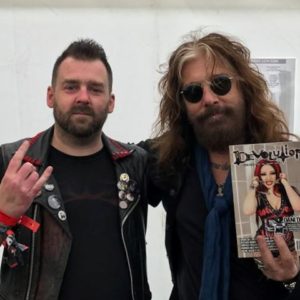 Mark Bestford talks to John Corabi about his time in the Dead Daisies, leaving Mötley Crüe, and the importance of music...
Copyright 2017 Devolution Magazine. All Right Reserved.
Back to top