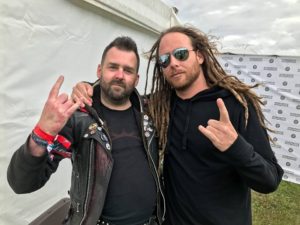 Mark Bestford caught up with Devildriver’s Mike Spreitzer to discuss how illness has made him healthier, his love of European metal and the endless search for the perfect guitar sound.

There was a long break between Winter Kills and Trust No One, did you finally find time to relax?

“Yes and no. It was nice to have a little bit of time off the road, I was home for over a year and I hadn’t been home for more than 5 months in the 11 years before that. So yeah, it was nice, I had moved into a place, I had built a studio in my house, it’s called Audio Vault and we did all the guitars and pre-production and bass for Trust No One there. We’ve done all the guitars and bass again for this new outlaw country record that we have coming out sometime next year. And I’ve also used it to create my own shop where I sell Axe Fx Presets, Kemper Profiles and over time I think I’m going to be making more things and selling audio cables and just things that guitar nerds love, like myself.”

You ended up missing the South America tour back in 2001 due to a health scare. Is that all in the past now?

“I hope so, unfortunately I still have to take medication because of that, for the rest of my life. I’ve had 2 seizures in my life, I had one when I was 18 and then I had this one about 7 years ago, whenever it was, 6 or 7 years ago. But I’ve never had one since, everything seems to be fine. I do go for regular check-ups with the neurologist, but I mainly take the medication because I surf and I drive a car you know and I don’t want to end up a vegetable from either drowning or partially drowning or whatever and get brain dead. Or sometimes people have seizures when they drive, so according to my doctor take it and it greatly reduces the chances, and so far, so good but I don’t let it impair my life at all. I was surfing a week after the whole incident happened, and you know, I do what I can to prevent it and I’m actually a healthier person than I was back then. And it actually in the long run changed my life for the better.”

Since joining the band how much would you say you’ve influenced the band’s sound?

“Up until this record it’s been a slow steady process until I became the prominent songwriter. When I was the new guy, you know joining a band is a lot like joining a club, you have to work your way up the ranks and I was the new guy so a kind of tread lightly and eventually push came to shove and I kind of started forcing my music into it because I got really lucky on The Fury of Our Maker’s Hand, my first record that I wrote with the band. A song that I wrote most of, called Hold Back The Day, ended up being the first track we released off the record and then so I got a little help off the record label, especially Monte Connor, kind of pushing the other guys to let me write more often and over time I just started writing more and more.”

You joined almost by accident it seems in 2004. Did you ever imagine you’d be the longest standing non-original member?

“When I joined I saw it as something that would probably last 2 or 3 years, because the lifespan of a lot of bands is really short. But no, I did not think it would last this long.”

You currently play ESP guitars, has that always been the case?

“Yeah, up until… I was in high school, I had a guitar teacher named T J Parker that was endorsed by Fernandes and he got me a guitar through them and I eventually bought another Fernandes. But when I joined DevilDriver they were loosely endorsed by ESP and we were about to do Ozzfest in 2004 and I felt I could approach a lot of companies back then because I had some good bargaining chips to get endorsement from like Jackson or Ibanez you know, companies that embrace metal guitar players and I just found that ESP have just a lot of guitars that are really light where a lot of the other companies maybe have 1 or 2. And they were in North Hollywood which is only about 45 minutes from my house and I’ve just really developed an awesome relationship with ESP. They’re good people, they treat their artists really well and I just absolutely love their guitars.”

Growing up what was it that made you decide to pick up the guitar and play?

“100% was, I think I was 5 or 6 years old and I saw Def Leppard’s Pour Some Sugar On Me video on MTV. And that’s what got me started but whatever was on in those days, it was you know, Poison, Scorpions, eventually Metallica, Pantera, Megadeth and Alice In Chains were probably the big 4 for me growing up.”

So, looking at the latest bands that are around at the moment, are there any guitarists you admire?

“I would say Emil [Emil Werstler] who used to play in Chimaira is probably the dude that has impressed me the most. But I don’t even think he’s playing in a band right now, or in a metal band, I think he’s working on a solo project. But he always impressed me, he’s definitely one of the best guitar players out there.”

“I’d say the guys in Metallica, Megadeth, Pantera and Jerry Cantrell from Alice In Chains. That was more middle school, high school, and then when I got to college our old bass player John Miller really started getting me into the whole European, Scandinavian side of things that for some reason just never made it my way when I was living in LA, this all happened when I moved to Santa Barbara. And my eyes were opened, At The Gates, In Flames, Dark Tranquillity, Opeth, you know I have never heard that stuff before. And then that alone really started to influence me a lot more than anything I had listened to when I was in high school.”

You say you have your own home studio now, how important is your choice of equipment for creating the right sound, not just in the studio but also live?

“Right now, for live right now a lot of people sacrifice a little bit of purity for convenience, and I just recently got endorsed by Peavey and I’ve been using an Axe Fx for a long time but there is something a little bit missing there that they haven’t really been able to replicate in the digital world 100% yet, and when I first plugged in my 6505+ in my house and mic’d it up in my studio I was just “Oh My God”. There’s just something there that had been missing you know, it’s kind of hard to describe, it’s something you can feel, there’s all these upper harmonics that tubes and analogue circuitry creates that the digital world doesn’t have quite there yet, it’s going to get there for sure, but it’s not quite there yet. And you know as far as sounds go, it’s an endless journey that has no end. A lot of guitar players just keep on looking and looking and looking, it’s fun for us for some reason. It’s weird, but I’m always on the lookout for something better.”

So you were on the second stage earlier today. What was it like seeing just how many people were there just to watch you?

“It was great, you know, I think today it was our third show of the tour so far. We had a headliner in Zurich, we played Download Paris yesterday. But whenever you fly from the States to Europe you’ve got this constant jetlag, you’re not sleeping well, everyone’s in a daze and you know people are a little bit cranky. But today was the first day of the tour where I’m feeling like we’re dialled in and ready to go and play some more festivals.” 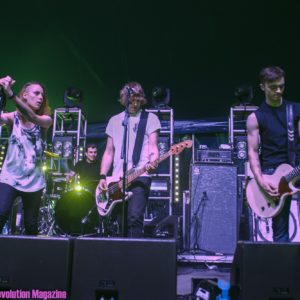 Drones are a feisty London five piece that have undergone something of a personnel makeover recently.  Their brand of melodic...
Copyright 2017 Devolution Magazine. All Right Reserved.
Back to top