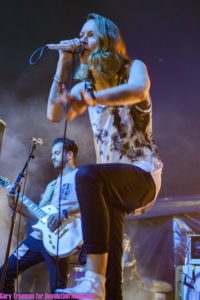 Drones are a feisty London five piece that have undergone something of a personnel makeover recently.  Their brand of melodic alt punk is the stuff the future of music looks set to be built on.  Gary Trueman chatted to the band about political videos and when their debut album is likely to surface.  First up though the delicate subject of festival beverages.

Each pick a different drink you’d want to have at a festival.

Lois: “I’m a total loser so I’m going to go with cider.  I’m a twelve year old through and through, always have been.”

James: “My weapon of choice is probably rum.  It’s made of sugar and it gets you going.  It’s brilliant.”

Tim: “My poison would have to be a G&T because you can drink a bunch of them and it doesn’t really take a toll on you.  Hangovers aren’t too bad.”

Mitchell: “I would love some Fireball whisky.”

Rob: “I’m going to sabotage the entire thing because I don’t drink so my drink of choice is a cup of tea.”

How do you feel the set went?

“It went really well considering how early we played.  Playing Saturday morning is a bit of a tough slot because everyone parties hard Friday night and they’re a bit hungover.  We’re really happy with the turn out and it went down really well.  We’re chuffed.”

When you’re not talking to people like me who do you want to go and check out?

You have new band members and your new singer Lois is a different gender to the previous one.  That seems to have given the band a different dynamic and real momentum?

“It’s given us fresh energy and ideas.  It got us reinvigorated to start writing songs.  We’d gone a bit stale before that, playing the same set for years and years.  We got some fresh blood in and it’s brilliant.  Tim’s approach to song writing and Lois’ approach to lyric writing has taken us in a completely different direction.  It’s got everyone stoked about being in this band again.”

New single ‘Territories’ is an awesome song and comes with an awesome video.  As part of the title has Tories in it would you like to comment on that?

“Have you not noticed it’s terror Tories, the terror of the Tories.  It was good timing (released just prior to the election and featuring a mock Prime minister).  We started writing that song and sorting out the video before the general election was even called.  Then we looked at our release time and thought this is so poignant.  Everything just fell in to place.  The reception for the single has been really good.”

Was the video all your own work?

“We came up with the concept ourselves.  We had good friends direct it and lend us the venue.  It was pretty DIY.”

So who plays the Prime Minister?

“The guitarist from the band Shvapes said he thought his dad would make the perfect Prime Minister.  He came down and we didn’t have a script for him or anything.  He asked if we wanted him to play a kind of evil Tory and he just switched character.  He smashed it.  He was so good at playing the drunk role as well.  To the point where the bar owner said there’s this really pissed guy outside can you get rid of him.”

Are we going to see an album?

“We’re just finishing that up now.  We’re recording it with Tim our guitarist so it’s all DIY.  It’s really nice that we can go into the studio when we feel we’re up there.  It’s nice to just sit back and let Tim and Lois do all the work, Haha.  They’re still on a probation period.  Write us an album, get us to number one, then you’re in.”

With some bands one person does most of the jobs with others they’re shared out.  How does that work with Drones?

“We all have our own specific jobs which works really well because it means we can attack everything at once and no one is tripping over someone else.  No one has to take on a massive work load.  Everyone has fallen into a place where they are comfortable too.  Rob does social media, Tim does production, etc”

Apart from global conquest where do you want to be in the near future?

“We want to attack all the festivals.  We want to play Download again and all the others.  European festivals as well is the big goal.”

“Well Tim will want S Club 7.  Seriously though, Green Day, Rise Against, Anti Flag, Social Distortion, The Bronx, Frank Carter And The Rattlesnakes and of course The Franklys. 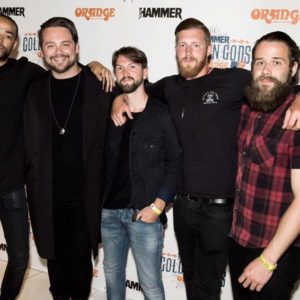 Brutai are one of a number of up and coming young bands who have taken metal as a base and added their own flavour to it, in this...
Copyright 2017 Devolution Magazine. All Right Reserved.
Back to top