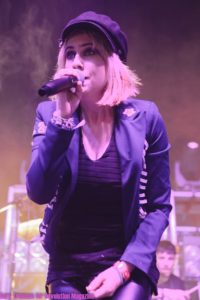 The Love Zombies are a bit of an enigma.  They play up tempo punk rock but it sounds silky smooth.  At the heart of this wonderful sound are Hollis and Davey.  Gary Trueman spoke to the pair about how they met, pledge campaigns and who they’d resurrect to play Download 2018.

You played Download before so, great to be back again?

Hollis: “Yeah and it’s sunny I can’t believe it, I have one pair of boots and they’ve survived.  It’s really nice to see what it’s like when it’s sunny.”

Davey: “We brought the weather over from California.”

Your music has developed a heel of a lot since the last time you played here.  What do you put that down to?

Hollis: “We’ve changed a lot of band mates, it took a long time to get the right people with the right mind set.  The evolution of a band does that.  It’s always evolving and Davey and I always wrote the songs which is why it’s kinda the same.  But as you get more people on the same wavelength it evolves.”

And there’s scope for the new musicians to put a bit of their personality into it.

Davey: “That could be it because we do have a bit of a revolving door but once a Love Zombie always a Love Zombie.  If you listen to the first EP and the early demos and then the Passion Fruit album and then the one we’ve just done it is a little bit affected by who plays on it.”

Hollis:  “Some stuff stays the same, the high energy, hopefully the quality of the song writing because we write the songs.”

Your music has been described as a combination of the Ramones and Blondie.  Are those two really big shoes to fill?

Hollis: “Yeah of course.  I don’t know though because the Blondie thing is just because I have blond hair and the punk genre but hopefully because they have great songs.”

Davey: “If you want to come and see a faster version of Blitzkrieg Bop come to the Dogtooth stage.  Downstrokes at 200bpm.”

Hollis: “It’s on our new album.  It’s on pledge music so you can pre-order it.”

Hollis: “I can’t believe after the first one we decided to do a second one.  To be honest pledge was really good.  They have a big platform.  Our campaign went really good but towards the end we have problems with fulfilling.  It wasn’t all their fault, I think it’s hard all the time you’re a smaller band.  It wasn’t their fault really it was just what happened.  We thought let’s try it one more time and it worked we hit 100%, 111%.”

Davey: The first one was good but someone at the warehouse lost their shit.

Hollis: “They quit in the middle of our campaign and lost all our stuff.  We wanted to sign our cds to our fans because they’d pledged but people were getting the wrong cds.  The universe likes to fuck with us but we’re still here.  Zombies don’t die.”

As a writing partnership you guys work really well together.  How did you meet?

Hollis: “And we recorded it.  I’d been looking for someone to write with and we clicked.  Then a big tornado of shit happened but it’s hard to find people you connect with, I’d been searching for ten years.  I used to hate writing with people and when I met him it was a soul mate music thing.  I glad that we met.”

Is that the musical love part of Love Zombies?

Hollis: “We have a love hate relationship.  We have a new song called When Love Turns To Hate we wrote about each other.”

How do you iron out the bits where you don’t agree?

Hollis: “A lot of screaming which is why I don’t have a voice.  A lot of screaming and throwing things.  You guys would just avoid so much suffering if you just know the lady is right.  Or just pretend and look dumb.”

Davey:  “The original Motorhead and the original Ramones back to back because they were two bands that united punk and metal.  Lemmy played at the Ramones last gig.”

Hollis:  “John Lennon because he always made me feel something.  To be able to connect with your soul and cry is just the best.  We miss him.”

What’s your top tip to bring to a festival?

Hollis: “Money. Money can solve all problems.  Need a tent, buy a tent.” 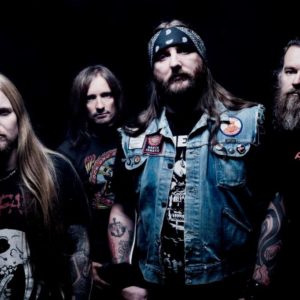 Orange Goblin have been stalwarts of the UK metal scene for over two decades now.  They have a reputation not only for producing...
Copyright 2017 Devolution Magazine. All Right Reserved.
Back to top