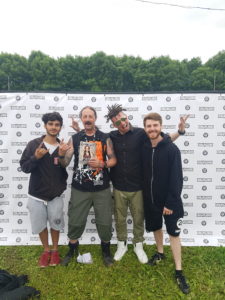 Hacktivist are one of the new breed of bands taking the rap metal theme and bringing it bang up to date.  Great hooks, twin vocals and acerbic lyrics, this is a band armed and ready for the future.  Gary Trueman chatted to the guys about crossover music, camping at Download and unity over division.

“Big, very big, and pretty early but very big.  A big step up.  Opening the main stage is a big deal.”

You got a great crowd.  What did it feel like to see that many people turning out that early?

“It was amazing and from the stage we could pick out people from all across the country and Europe, lots of familiar faces.  You’re not sure if people are going to turn up or not so to have people there is great.  I think in the last ten minutes or so before we went on stage the crowd tripled so at the last minute we were a bit worried but it just went bang.  We really appreciated the turn out.”

It’s dry too.  We haven’t had much rain on the band days this year.

“Keep it dry, we’ve got our good shoes on.  Download is a regular fixture whether we play or not.”

“First few times yeah but I’ve managed to make a few friends in high places to blag a dry place to sleep.  To be fair you get offered artist camping which is nice and polite but I miss the rowdiness and general filth of being in with the masses.  Even if you set up in artist camping you spend the night in the regular campsite because that’s where all the magic happens.”

The tragic events in Manchester seems to have brought a lot of people within music together.  What do you think?

“Unity over division.  It’s a scary time to be about but it’s beautiful to see the reaction in the music industry as a whole.  We wouldn’t be talking about Ariane Grande now if it wasn’t for that but for everyone to come together in that community reaction is what’s really important.”

The rap/metal thing has been around for quite a while now.  Aerosmith are playing and obviously the Run DMC link there was an early part of that type of cross over.  There are all kinds of genres and sub genres mixing now and I believe you guys have got a bit of Grime in your material.

“That’s it. We’re not the first rap metal band ever to come about obviously but with these flavours and fusion is just so………”

It’s great to see a festival like Download put you guys on and not stick to a very narrow genre.

“Yeah, looking back to yesterday over half the acts we saw had rappers.  We saw Asteroid Boys, Prophets Of Rage and Machine Gun Kelly.  Five or six years ago you wouldn’t expect to be seeing that stuff but now the crowds are there and everyone is singing along.  It’s nice that it’s such an inclusive festival.  Someone else said it’s just so different to so any of the other festivals and I’ve not seen any trouble.  It’s always really chilled and you come away with more friends than when you came.”

The crowd is really chilled.

“It’s a massive vibe.  People don’t seem wrecked enough.  Everyone is so cool and nice.  You’d think there would be a few rowdies but nothing, it’s such a good vibe.”

Do you think there’s a lot more acceptance of other genres these days?

“It’s the future.  Genres are crossing over full stop.  Everything is meeting in the middle.  There are so many sub genres that you can’t really preoccupy yourself with that.  It’s multiculturalism in music.”

What do you listen to?  It must be a wide range of stuff.

“That’s part of what makes Hacktivist so diverse is that we all come from pretty wide reaching different angles.  We have this massive spray of different genres that we’re all interested in but there’s a core crossover from also having common interests.  It just works, it gels.”

So who decides what gets played on the tour bus?

“Whoever has the aux cable or whoever is still awake, they get to bother the people who aren’t.”

“Meshuggah, if we’re talking a solid metal line up.  Korn too, hands down.  Deftones, they must be ready to headline.” 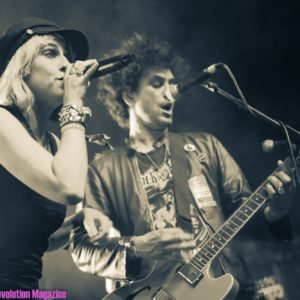 The Love Zombies are a bit of an enigma.  They play up tempo punk rock but it sounds silky smooth.  At the heart of this...
Copyright 2017 Devolution Magazine. All Right Reserved.
Back to top