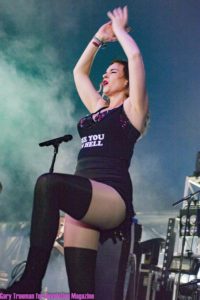 Devilskin are a band from New Zealand who are doing rather well in the UK right now.  Their polished hard rock meets alt metal style has seen them make a lot of new fans.  Gary Trueman spoke to the band about playing Download, the brotherhood of metal and rivers cutting through rock.

“It’s iconic.  It used to be the Monsters Of Rock festival so it’s the Holy Grail of festivals.  We’re so excited to be here it’s great. “

What did you feel like when you got the shout?

“Euphoria. Disbelief.  We thought it was a joke.  Growing up where we did news filters back three months later that there was a Mosters Of Rock festival with all these cool bands and we’re thinking wow they should do that in New Zealand some time.  It’s unreal to be here all these years later.”

Are you here for the full weekend?

“Well yesterday we were filming a music video at a castle but we’re going to be here for the rest of the event.”

So if you get the chance who do you want to check out?

Your album Be Like The River, quite a lot of meaning in that title?

“We started small, started off in pubs and worked our way up our selves.  We didn’t have a lot of help from anyone in the early days.  Be Like The River comes from the lyrics to a song that isn’t on the album  but it’s all about staying true to your path.  Cutting through the rocks you can make your own way if you’re determined enough.  Be like the river and cut through the stone.  It’s about empowerment, we are where we are today because we’ve stuck to our guns.”

You’ve developed a heavier sound with both clean and less clean vocals, is that just a natural progression?

“Yeah I guess so, we just kinda do what we want.  We don’t try to stick to a certain kind of sound.  With vocals I just do what I want as well.  The next album I might not scream at all.  The songs just come out how they come out.  There’s no agenda.  It’s all pretty organic.”

What do you find are the differences in the audiences here and elsewhere in the world?

“The audiences here and in Ireland are really receptive.  They absorb it and listen to the lyrics and they listen to what you’re doing.  New Zealand has got slightly tougher crowds.  Whereever you go though the metal crowd is a brotherhood.  If you see someone with a t-shirt on your like hey mate.  Metallers arer just one big family all over the world.  It’s a common language.”

Enlighten us about big New Zealand music festivals.  Do you have any?

“We used to have Big Day Out which was like a small version of Download but that finished years ago.  Short answer is no we don’t, you lucky bastards.”

But you have great scenery.

“But it’s not rock scenery.”

Breaking the band in the UK and US.  That’s obviously going well now?

“It is here, we haven’t really spent a lot of time in the US.  We played a couple of shows over there but we’ve really been concentrating on the UK and Europe because we just seem to get the best response here.  And basically this is the home of great music.  This is the epicentre of the world in terms of hard rock and heavy metal.  This is our fourth time here in two years and it’s quite a trip to come over from the other side of the world but it’s just awesome to be here.”

Do you find there’s a lot in common between UK and New Zealand people generally given our ties?

“Well a hell of a lot of people from New Zealand came from the UK or has UK stock so almost everyone has a little bit of Irish and a little bit of Scottish.  We’re all kindred spirits, we speak the same language, slightly different dialects, some we can understand and some we can’t.”

You must be referring to Geordies, even we can’t understand them.  Do you have any Geordie accents in New Zealand.

“No but we have Geordie Shore TV programme and we watch that and it’s like what the hell!”

“Oh Deftones.  Avenged Sevenfold.  Led Zeppelin but we know that won’t happen.  Testament too, Chuck Billy is huge and what a front man.” 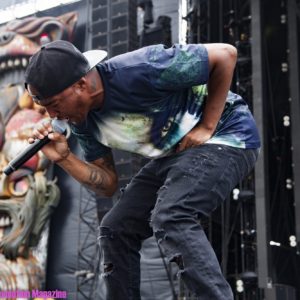 Hacktivist are one of the new breed of bands taking the rap metal theme and bringing it bang up to date.  Great hooks,...
Copyright 2017 Devolution Magazine. All Right Reserved.
Back to top