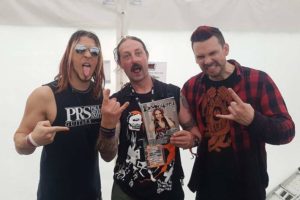 Playing for the second time at Download Like A Storm are one of the world’s happiest bands.  Always a smile and always happy to chat.  Gary Trueman spoke to the New Zealanders about their rivals across the water Australia, playing Download and of course the weather.

What have you been up to recently?

“Dude we’ve had an amazing time.  We were in the UK last November and December, we came over here with Alter Bridge, Volbeat and Gojira and that was insane because we got to play arenas all over the UK and Europe.  Then we went to Australia and new Zealand with Alter Bridge earlier this year.  We’ve also spent a lot of the last year making our new album Catacombs.  We’ve just come from Las Vegas where we’re making our record.  We’ll finish recording this year then we’ll hand it over to our label.”

You mentioned Australia and there’s always been this traditional rivalry between them and you New Zealanders.  How do the bands get along with the fans?

“Well it’s interesting because Chris plays Digeridoo which is one of the things we’re known for.  It’s an Australian instrument and there is a rivalry between Australia and New Zealand and we kinda wondered how Aussie rock fans would react to a New Zealand band playing Digeridoo.  Actually they loved it.  We were blown away.  We used to go to Australia every year growing up because our grandparents lived there but we never played Australia before.  We were really blown away by the reaction and how excited people were to see Digeridoo and to hear our music.  We thought they might want to kill us but actually they loved it.  It was an awesome tour.”

Being from New Zealand you’d feel the need to come the UK and US.  You’re breaking well in the UK now, what about the US?

“We spend a lot of time in the US, it was the first place where we took off internationally.  We drew up in New Zealand but our dream was always about being able to tour the world.  We’ve been lucky enough to play a lot on the states and to come to the UK and Europe and play as much as we have is amazing.  Part of being in a band, part of the dream, is to tour the world.  We’ll be touring in the US with the new record and we’ll be back in the UK as well.”

Download festival is a huge name here, is it a big name in New Zealand too?

“I think everyone in the world knows about Download festival.  We’re lucky because it’s our second time here.  It’s an honour to play these grounds, all the videos you’ve seen live from Donington and then the festival itself, we just feel really lucky because we know how big it is.”

Who are you looking to check out while you’re here?

The reality is you end up talking to guys like me.

“Haha, fortunately your such a cool guy.”

“It is funny though you come to festivals and you spend most of your time looking at the inside of a press tent, but that is part of the dream too.  To come along, meet people and talk about music.  That’s what we love more than anything.  If it means we see a few less bands but we get to keep coming back then it’s worth it.”

On a more sombre note we recently had the tragedy in Manchester and Ariane Grande really stepped up.

“We played that arena in December so that really hit hard because it always strikes home a little more when it’s somewhere you’ve been.  We’d be like we’re so excited to be going to the UK and fans would be like stay safe.  We’re lucky because the job that we do and all these bands do is provide a distraction for people in their life and provide enjoyment.  We just have to make sure people have a good time.  I saw that she did that and it’s awesome, and awesome that all these bands are still coming and playing.  It’s important, you can’t let terrorism affect society where everyone gets cautious, and panicked about everything.  You have to carry on.  What she did was incredible and we feel for these people on a personal note because we’ve played these venues.  It’s great being at Download where there’s so much positivity.”

It’s dry this year, you remembered to pack the sun.

“haha,Yeah.  We were here two years ago and it certainly wasn’t dry and from what we understand last year was wet too.  We saw the sun today and we didn’t realise you guys got the sun in England.  We’ve just come from Las Vegas and they have plenty of it there so it’s great to see it here too.  Hopefully it’ll still be here when we come back on tour.” 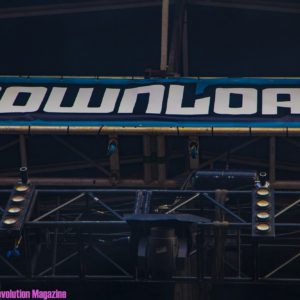 Famous for his white hat Andy Copping is the main man at Download festival.  As promoter he is one of the busiest people...
Copyright 2017 Devolution Magazine. All Right Reserved.
Back to top