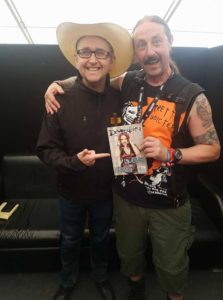 Famous for his white hat Andy Copping is the main man at Download festival.  As promoter he is one of the busiest people on site but still made time to answer a few questions during the Saturday afternoon.  Topics included the addition of wrestling to the arena, up and coming bands and on site drainage.

The festival has been a great so far.

“It’s been incredible.  The atmosphere is always great here but when you can just feel the vibe off the crowd it’s amazing.”

Have you had any feedback from people about the improvements to the site, about the drainage?

“I think to them the fact that they know we’ve done stuff has been really important.  We’ve moved a few things around on site, where stages are and stuff that seems to have works really well.  When I’ve walked round all the fans I’ve spoken to seem to really enjoy what they’re getting at Download.  It’s a good vibe out there.”

Do you think there’s a feelgood factor with the weather where if it’s sunny the fans tend to feel it more?

“There’s no question about it.  One thing I’ll say about the Download fans is that they’re here rain or shine.  It’s almost like whatever you throw at them they’re here to hang out with friends, make new friends, watch bands that they like and find new bands.  It’s almost as if the weather doesn’t matter but when you get great weather you can sense it means a lot to them.  They’ll live through the rain they have done for God knows how many years we know that.  It was just nice to see some green grass and sunshine.”

Have you seen any bands?

“I have.  I’ve seen Yonaka on the 4th stage, I saw Sum 41 and Good Charlotte and I caught Mastodon.  I saw Prophets Of Rage, Five Finger Death Punch and System Of A Down.  I saw Creeper who totally blew me away.  I cannot go on about how much I think that band has got an incredible future ahead of them.”

Which bands from this year do you see stepping up?

“When you look at some of the bands we’ve got, I mentioned Yonaka, they have a chance of coming through.  And of course Creeper.  There’s Tyler Bryant, there are a few bands out there and there are bands we may not be sure of yet and you’ll watch them and think there’s another band that could come through.”

As a young band how do you come to the attention of you guys.  What do you do?

“Some of them nag us to death to get on the bill, and become really annoying.  There are my taste makers out there whether it’s people in the press or managers or agents.  Even punters saying you should look out for this band.  Another band we need to watch is The One Hundred.  Just getting a feel from what people are telling me and people I trust in the business is a way of coming to my attention.  If bands are lucky they’ll get on.”

The bands that are just below headliner status like A Day To Remember and Alter Bridge, who do you think will be the next one to make the step up to headline?

“Well each of those has the potential to be a headline act.  You’re always at the mercy of how the next record is going to be, how strong the next tour is going to be.  When you look at some of the other acts that are out there whether it’s Bring Me The Horizon or whether it’s Fall Out Boy, whether it’s Paramore, there are a number of bands that are on the cusp of coming through.  I would hope we would see at least one or two of those coming through for us to be a headliner in the future.”

There’s a lot of great fancy dress again this year.  Are there any that have caught your eye?

“There was one guy who was dressed as a horse, it was like a blow up horse thing.  I remember looking at him and thinking…right….yeah.  You get that at Download, people just dress in all weird and wonderful ways and it’s fun.  They come for fun times and they can dress how they want it doesn’t matter to me so long as they’re having a good time.”

There was a T-Rex doing the rounds yesterday.

“Was there!  Amazing.  When we get into the fancy dress and the fact people tattoo themselves with the Download logo or mostly with the dog tattooed on them.  The dog has changed over the years, some people have got three or four dogs on them.  I don’t know of any other festival in the world that has their emblem or their logo tattooed on people.  That’s something very special to this festival.”

What do you think of having the wrestling taking place in the arena?

“I think it’s an amazing thing when we had NXT in for the first time last year it was a big draw and it’s an added bonus for the festival, it’s added entertainment.  I think the fans appreciate it.  It’s an incredible business they have and bringing that here as I say has added entertainment for the fans that are here.  It can only be a good thing.” 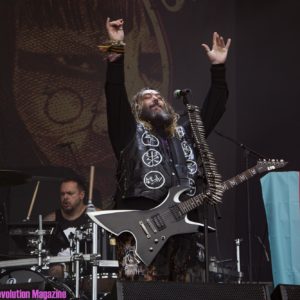 Max Cavalera is a legend on the metal scene.  He returned to Download playing the Roots album with his brother Iggor...
Copyright 2017 Devolution Magazine. All Right Reserved.
Back to top