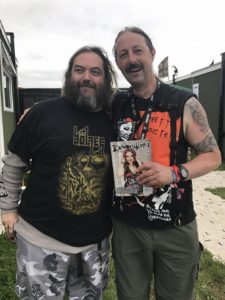 Max Cavalera is a legend on the metal scene.  He returned to Download playing the Roots album with his brother Iggor as part of the Return To Roots tour.  He spoke to Gary Trueman about the new Cavalera Conspiracy album, the importance of family and what he likes to do with his precious down time.

“Well so far so good.  We’re glad to be here and we’re excited for the show.  It’s going to be a great show and Roots is a fantastic record to play.  I think it goes down good in a festival environment and it’s great to be back in the UK.”

You’re doing the Roots album under the Max and Iggor banner.  Is that just for one show?

“It’s for a few of shows.  We’ve already done a full American tour under Return To Roots and we’re back later in the year for some more festivals but this is the biggest UK one we’re doing.”

You say return to roots, is that something we might see reflected in the next Cavalera Conspiracy album?

“The Cavalera album is almost done, all the music is finished.  It was recorded in Phoenix.  I think it will surprise a lot of people.  I think it’s the best capture of the Max and Iggor chemistry, of playing together with my brother.  I’m excited.  It comes out in October.  It’s a very powerful record with a lot of great riffs.  I did a lot of research for almost four months, ten hours a day, riff searching.  I came back with really good shit.”

So you put a lot of effort into finding the perfect riff for your tunes?

“I do.  I’m a riff specialist, a riff lord or whatever you want to call it, a riff doctor.  I love riffs, I think they’re the soul of the song.  There’s nothing better than hearing that one riff that’s calling you to do something stupid and you end up in the pit breaking your leg – haha.”

Does it inspire you when you hear something and want to build a song around it?

“It does, you’d be surprised.  Sometimes there’s a part in a song and you’re thinking you can’t wait to play this part live.  We had a producer who used to say when there was a part that would be cool live “Let the stabbing begin” like this part is going to be insane.  It’s a cool environment writing riffs is just me and the guitar in my living room and then recording in the studio again is very cold, there’s no people there.  So you have to project that the part of the song when it hits people will do something like that.”

Do you find from home to studio sometimes something doesn’t sound the same and you have to change things?

“A lot of times we do and I think that’s good, the transition is good.  When you write at home it’s a primal idea but it’s not polished yet.  When you go to a studio you have a chance to look at it again and add stuff to make it a little better and a little more exciting.  It’s a good process to start at home then go to the studio and build on top of it.  Then take it on live.”

Sometimes you must think this will really kill it live.

Do you find with Iggor you can communicate on stage without even looking at each other because you’re brothers?

“It’s almost creepy.  Sometimes we do these jams with just me and him at the end of shows and it’s almost telepathic where we’ll end right on the right note without counting.  It’s pure telepathy.  I don’t know how it works.  It’s cool and it’s fun.. I’m a metal fan and I’m passionate about metal.  I look at music as a fan and I record albums as a fan of what I would like to hear.  I hope I’m passing that passion on to my kids so they can continue that too.  I hope they can carry the torch.”

You must be a very proud father to see your kids up on stage.

“Yeah definitely.  Zyon is drumming for Soulfly now, he’s an extremely powerful drummer, very talented and very powerful.  It’s great but I would have supported anything they wanted to do.  If they wanted to be lawyers, doctors whatever but they decided on music so we’ll keep it in the family.  We’re one of the most metal families around.”

Speaking of metal families your wife Gloria is an integral part of what you do too isn’t she?

“Yeah man, it’s a rare commodity to have a manager on the road with you like that.  Everything great, she takes care of everything.  I love that she does blogs, tells stories on her blogs and really interacts with fans.  We have a really special relationship that has lasted through the years.  I think it’s the combination of our passion for work, for metal and for other regular life things that we both like.  Maybe that’s the secret for a successful marriage.”

Do you do stuff together that’s not metal related?

“A lot of what we do surrounds the band stuff but here and there we get some time.  We like to go to museums because I like a lot of history and she loves history.  She’s always reading history books so from time to time we like to go to museums and stuff like that.  We’ve also been to a couple of really cool operas in Moskow and we go to shows too.  We recently went to see Mastodon in Phoenix.  They are our friends so we went to see them.  I like to be in the crowd, just put a hoody on, a couple of people will recognise you but that’s OK.  I like to feel the power of the show from the crowd.”

If you could resurrect one musician to play again who would it be and why?

“Lemmy of course, doing Ace Of Spades with Lemmy would have been awesome.  He was one of a kind, a very special person in music that we lost.”

Look out for the new Cavalera Conspiracy album later this year. 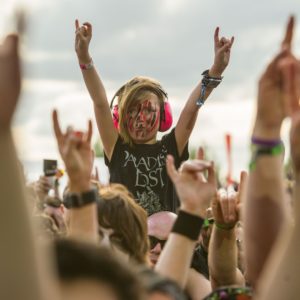 Just 51 days to BLOODSTOCK FESTIVAL Not long now before the BLOODSTOCK faithful thunder onto the hallowed turf of Catton...
Copyright 2017 Devolution Magazine. All Right Reserved.
Back to top