Skarlett (Skarlett Riot): “It’s nice to look back and feel positive about yourself.” Skarlett Riot’s purple mopped queen of the mic Skarlett is the kind of multi-talented person that offers inspiration to others.  Singer and guitarist, model and artist, there seems to be almost nothing the girl from Lincolnshire isn’t capable of achieving.  Gary Trueman had a chat with Skarlett about music, pet portraits and self belief.

It seems like the band are now moving in a slightly heavier direction.  Is that by design or just how things have worked out?

“From looking at our first music to now it was quite pop rocky but we’re more metal/rock now.  I think we’ve just matured naturally and developed a more polished sound.  We’re looking forward to releasing some new music later this year so we’ll be carrying on with the heavy side of things.”

That more polished sound, do you think that’s come from understanding more about the music you’re playing, what your capabilities are and the direction it’s going?

“Yeah, definitely.  I think as musicians we’ve grown, we play together more naturally and we are pushing ourselves at the minute.  I think we’ve found our sound now because at one point we were still experimenting with different sounds.  Now we’ve found where we want to go we kinda know where to develop ourselves.  The music we’ve been listening to, like the guys are into bands like Architects and Parkway Drive and I’m still into rock such as Shinedown.  Combining them together is how I would describe our sound now, you’ve got your heavy elements but you’ve still got Katy Perry singing (laughing).”

Your vocals are a lot stronger.  Obviously that comes with maturity and using your vocal chords a lot.  There is a comparison in a way to how Halestorm started out and Lzzy’s vocals and how she’s developed.  Is that something  other people have remarked upon or you’ve noticed within yourself, how your voice is developing?

“I think because it’s you and you’re just constantly cracking down with writing and new music you don’t really realise too much about yourself you’ve maybe grown and changed.  A lot of other people have said my vocals have matured.  And you’ve really grown as a band.  It’s nice to get those compliments back because you know your hard work is paying off.  You can almost take a step back and look and say things are moving forward.  It’s all about practice.”

The band have a new global record deal too.  Who’s that with and how did it come about?

“It’s with Despotz Records in Sweden.  The guys checked out our music, our Sentience EP and we’ve just got new management at Artery Foundation and they said come and check Skarlett Riot out, what do you think?  They loved our music and they wanted to work with us on our new release so we’re going to be releasing an album with them.  They’re just really enthusiastic about our music and they really dig what we do.  It’s the first label deal that we’ve had so we wanted to make sure it was right.  These guys are really down to earth, they just want to help us as much as they can.  They’re in it for the music, which is what you want.”

Long term  ambitions for the band?  Everyone says world domination but realistically the next two or three years it’s a case of album, tours and possible festivals?

“Yeah.  At the minute we’re still writing so we’re cracking on with that.  For us it’s about touring this album.  Getting out to as many people as possible.  We’d love to tour Europe and eventually get into America.  It’s about making the world know about Skarlett Riot rather than just the UK.”

Moving on from music to something you’re pretty new to – modelling.  We’ve seen a few shoots up on social media.  How have your experiences been so far?

“It’s been great.  It’s something someone suggested a while ago, why don’t you go into modelling, you’ve got the hair and the look for it.  I thought I’d try it out and did my first shoot around two years ago.  I’ve stuck with the same guy going back.  Some mixed opinions with people saying you’re better than that but I don’t think that’s the case at all.  It’s not about being better than that it’s about expressing yourself.  Also you’ll look back and think hey I look good in that photo.  It’s nice to look back and feel positive about yourself.”

With the band thing and modelling, do you think keeping that image and that brand is important?

“Definitely, it’s what people buy into.  It’s your look and what people like about you that gets you more work.”

How far do you want to take it.

“It depends on how big it went.  If I got offered a large sort of deal It’d take a lot of thinking about.  I’ve had clothing brands like Iron Fist and Spin Doctor send me things like leggings to model.  They let me keep the clothes and I tag them in the shots and share it.  As to how far I want to go with it? I just started it up as an experiment as something I’d like to do.  I guess we’ll have to see.”

Do you think you have the band image to consider as well.  There will be certain types and styles of modelling you’d have to say no to?

“Yeah definitely.  I enjoy a challenge and experiencing new styles of modelling but I think certain types could harm the band and the band image.  At the end of the day I want to be seen as a front person rather than the whole sex sells kinda thing.  I’d want to be seen as that front person, more like a guy on stage, to go on and do what everybody else does.”

Multi talented Skarlett is also a pretty damn talented artist as well.  How did you get into doing artwork, and specifically dogs and cats?

“I can’t quite remember.  I’ve been drawing since I was twelve.  Then I got involved in playing a guitar and singing lessons and didn’t pick up a pencil for ages.  A few years back I thought I’d start drawing again.  I’d draw something and fans of the band would say I want to buy that off you and I want you to sign it as Skarlett.  So I started selling a few prints.  I drew my first cat portrait which was my own and put it up on line and got messages from people asking to draw their pets.  It’s been quite a good speciality to get into because there’s a market for it.  It’s just taken off and I really enjoy it.”

What do you think is your best piece of artwork to date?

“I’d say an Alsatian dog I drew.  It was my first dog , I’d done loads of cats and I was really happy how it turned out.  It’s still one of my favourite pieces.”

“I’d say I’m a perfectionist which is annoying for everybody else and I’m very impatient so when it comes to writing songs and the guys are going through the process I’ll be wanting to finish one song first before starting another.  I feel like I can be bossy and impatient which is bad for everybody else but for me it’s like come on this needs doing.  I’d say I’m easy to talk to so getting along with other people, talking to customers with my artwork or on stage with the band I’m quite open with everybody.  I’d say I’m quite easy to be around.”

What’s your biggest achievement to date?

“I’d say our Sentience EP.  It was great to play the festivals such as Download and Bloodstock but releasing the Sentience EP because we really believed it was our best music to date.  It had such a good reaction.  The most sales have come from that one.  Getting on stage live and playing those songs and having all the fans singing them back at the top of their lungs.  All your words that you’ve been writing and their so passionate about it.  For me that’s the biggest achievement.”

What piece of advice would you give to a fifteen year old Skarlett if you could?

“Don’t be such a stress head and have more patience because these things don’t come overnight.  Believe in yourself and have confidence.  I don’t have loads of confidence now but I have more than when I was younger.  I never believed I was good at singing or playing guitar and it took a lot of pushing to get me out of my shell and become who I am.”

Frank Carter "I would prefer to be the person who is defining how things are done rather than follow the best way it’s been done in the past!" 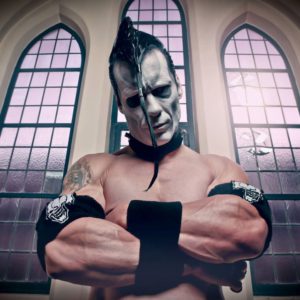 He is one of the most recognisable people in alternative music.  As part of the Misfits he became an icon to a generation. ...
Copyright 2017 Devolution Magazine. All Right Reserved.
Back to top