Its sometimes difficult to try and define a band by genre – something may spring to mind on one track and then is quickly dispelled by the listener as we try and find a more suitable comparison – truth is Headblaster are a French band made up of five incredibly passionate talented individuals that include John, Anthony, Thomas, Bruno and Sébastien who seemingly pull their diverse influences from the more bluesy southern whiskey slugging bass chomping rock depths of metal and then add and dilute accordingly to make their own flavour. It really works. The songs are individual and offer a glimpse into each member’s musical personality though I fear the reproduction on this 4 track Ep could have been a little tighter (a little birdy tells me these guys will be holed up in a studio to record their first album soon though so this will be a great asset for their next offering!) Title track ‘Hangover’ is catchy as hell and groove ridden with some great thunderous bass as its under carriage but its ‘Cowboys Are Not Dead’ that is the standout track for me and I would personally love to see the band sway more in this doomier and heavier direction which seems to vocally suit the flawless and transmissible guitars that really lay down the feel good in this song. Sterling effort and more exciting things on the horizon it would seem! 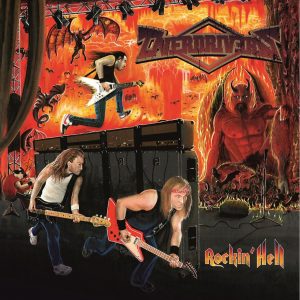 Overdrivers - Rockin ‘Hell (Self-Released) I want to start this review by saying that I receive hundreds of demos,...
Copyright 2017 Devolution Magazine. All Right Reserved.
Back to top