They’re stalwarts of the underground scene who recently took to the stage as support for the mighty New Model Army recently. Yur Mum also did this while undergoing a radical transformation from a three piece to just two band members. They not only survived but flourished.  Part of the wonderful Lips Can Kill tour Gary Trueman chatted to Anelise and Fabio before the final show of that run in Corby. Up for discussion was their new EP, losing their guitarist and which band member is a bit of a headless chicken. 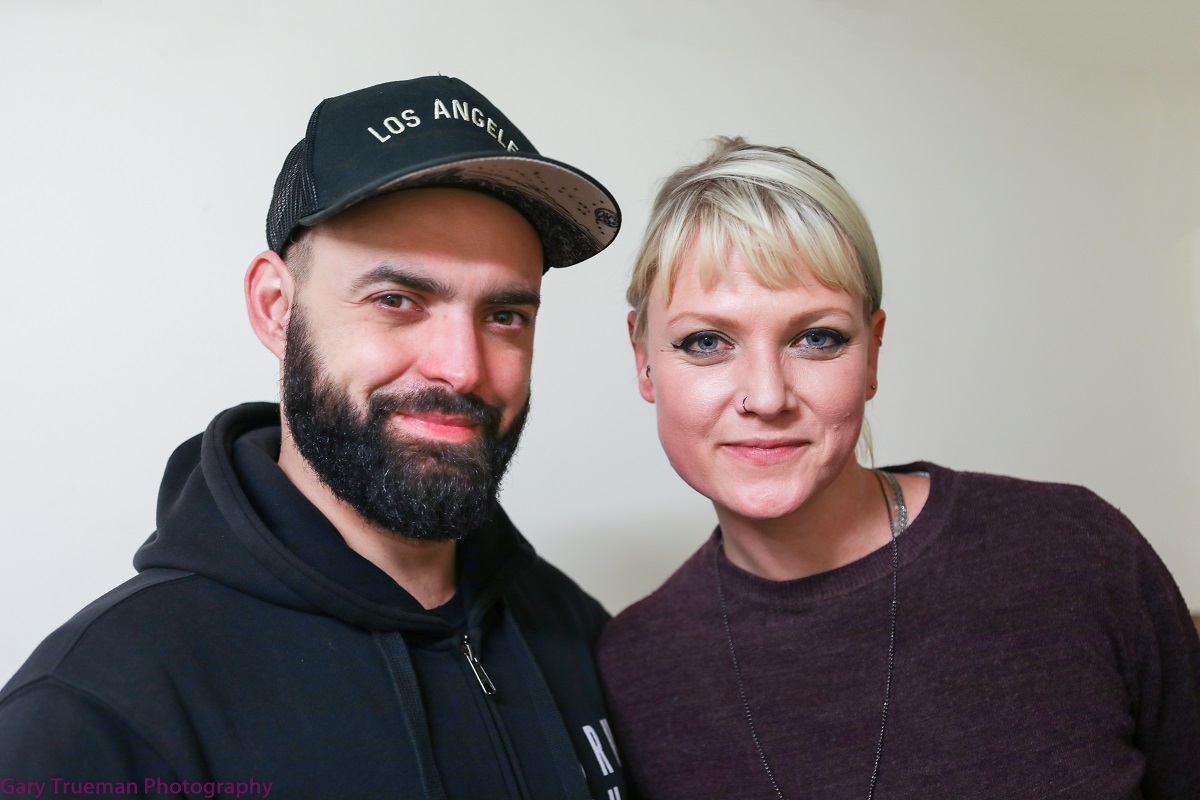 You’ve got a new record coming out soon so what is it and what can we expect?

Anelise: “You can expect an amazing recording.  It’s an EP and we got it out on December 6th. It just follows through in terms of fat noise.”

What do you feel you’ve done differently on this record from before?

Anelise: “I think we were just like more comfortable with each other, the three of us. And we knew what we wanted. We were trying out the new songs at gigs to see what worked and what didn’t. So we were just more prepared to record.”

Fabio: “It’s like a natural process. The first album we were playing together as a band for maybe a year. For this one we’ve been on the road for almost three and a half years. So we simply have more experience, and more baggage. I think maybe the creative process was slightly different. I think before we didn’t take the band seriously. When we started it was any sound or any thing, we didn’t try to have a style. We were just trying to have fun and have a laugh so even the songs are a bit silly. Still we invested time to finish them. No we have less time to jam and stuff so we had to be a bit more straightforward with the songs.”

Do you think that that a natural maturing that all bands go through?

Anelise: “I think so, I think there’s also a danger in that too because you think the next one has to be better than the last one. It’s good to push yourself but not to the point where it’s not fun or it’s not you. If you can try not too hard but still make it better. It’s not a competition with the albums.”

Fabio: “I don’t think it’s actually fair to say things like oh this is much better than the first one. It’s just a different journey. I personally don’t think about trying to make stuff better. It’s just doing stuff slightly different and evolving a little bit.”

You’ve been on tour with three other amazing bands. How did the tour come about and how did you all get together and get to know each other?

Anelise: “It started with a gig in London and we saw how it works so well because we have four different sounds and I think we compliment each other. We didn’t realise how well they would work until this tour. The more you get to know each other the more comfortable you are with each other, on stage, off stage. I’m going to have the blues once it’s over because it’s been great. We’re already discussing that we should do this again.”

We have to talk about you playing two  major support slots with New Model Army too. How was that and how do you think playing those big stages with NMA worked for Yur Mum?

Anelise: “It was crazy. It was amazing. For me it’s a memory that will last forever. Getting to know them, seeing how professional they are. Not being assholes just because they’re as big as they are. So humble and responsible. It was one of the highlights of the year. As we became a two piece when that happened it was a big test. It was an interesting test where I would say more than 80% of the audience didn’t know about us at all. So we thought we might as well introduce Yur Mum as it is now and see how it works. The reception was just unbelievable. I didn’t expect that people would come early. And people were actually engaging with us and buying merch. We are very thankful to them for the opportunity.”

You said as you were then which means we have to talk about the fact that you’re a two piece now and not a three piece as Akos has left. Do you want to shed a bit of light on how that happened?

Anelise: “I think life got in the way. We just sat down and we wanted different things in terms of commitment. We were in another level of commitment with the band and we didn’t want to slow it down. And he needed a little bit of slow down for what is right for him. So we sat down and said we cannot wait, we’re too old for this shit and we’ve waited too long already. It was amicable and he is super supportive. He’s really happy with the album.”

Fabio: “ He wanted to help us find a replacement but we wanted to see what we could do with just then two of us. We actually admire lots of two piece bands. One of the reasons we started this band was because we saw a band called White Miles a few years ago. They were a two piece and that’s when I decided I wanted to play drums and go back to this kind of raw dynamic of rock bands. No backing tracks, no synths, no electronics, just the instruments and sweat, and pain and even mistakes. That’s the beauty of music isn’t it? What you see is what you get.” 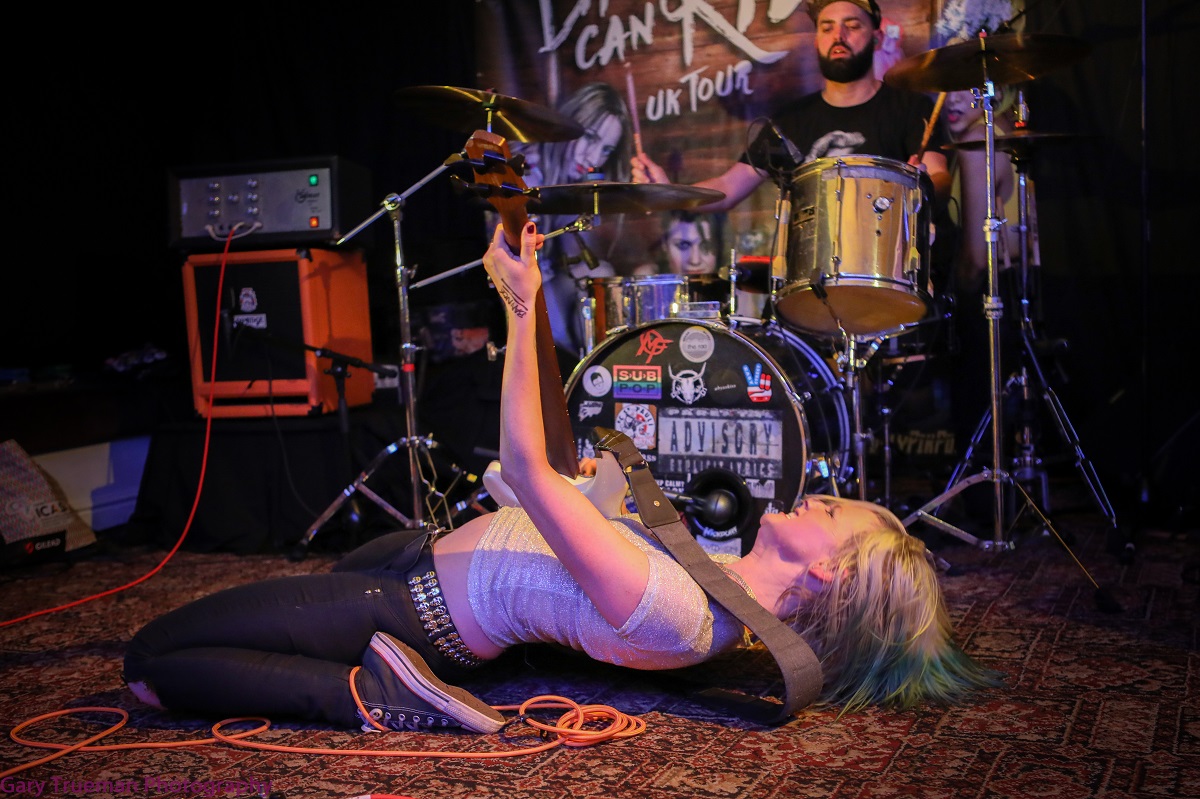 A lot of people at the New Model Army gigs you played were known to have commented that your sound is so full that you don’t need a guitarist. So are you looking or are you going to stay as a two piece?

Anelise: “We’re going to continue as a two piece. We thought that if we get a guitarist now we know it’s going to work and maybe the chemistry would have to grow. If we try as a two piece and it doesn’t work we can always go back to having a guitarist. If we started with a guitarist again we wouldn’t have any idea whether it would work with just two of us. So we thought let’s take a risk, but we never tried it live on a big stage, then we did with New Model Army.”

Fabio: “We were really anxious before the gigs and to be honest October was pretty depressing and super stressful. We started rehearsing every day and making new arrangements to make the bass work. We changed the dynamic a little bit and changed how Anelise used to play to get some of the guitar parts to blend in.”

Anelise: “No solos though. He has a unique way and I don’t even want to try that.”

Fabio: “We thought the shows with New Model Army can either make us or break us. If it works then we can play any gig and nothing would be a problem any more. And if it didn’t work then that’s the end of us haha.”

You have something big coming up next year with Rebellion Festival too.

Anelise: “I know! We have two festivals in Blackpool. We have the Punk Picnic in June and then Rebellion too. So there is light at the end of this tunnel and I’m very happy.”

Fabio: “We’re also going back to Mad Hatters down in Devon and Ice Breaker in Manchester and also the 0161 festival there too.”

We’re going to put a bit of a twist on the next question. Instead of answering for yourselves can you answer for each other for this one. What are each other’s best and worst traits?

Anelise: “The best thing for me in Fabio is he never gives up.  That was very important for me when we changed and decided to play as a two piece. We’ve been married for ten years and I know right from the start that for this guy nothing is impossible. If I’m down and I’m losing hope he’s like no we will do this and there is nothing that is going to be in the way. I love that about him. And the negative thing, and I’m this a s well, he’s stubborn. When we’re stressed or we’ve had no sleep we’re like I’m right , no I’m right and we turn into children a little bit.”

Fabio: “I think the best thing about Ane is she’s always optimistic about things. She’s very humble and has an immense talent but doesn’t really acknowledge that. She’s very genuine and a very approachable person. People look up to her, she has lots of charisma and that’s something I don’t have much of. That’s why she’s the front person of the band. On the negative side, it’s something we joke about, she becomes the headless chicken. She goes on stage and she’s so desperate to set up and she’s like aarrgh my gears not working and I’m like have you plugged it in? It’s not, or there’s a cable out. Headless chicken.”

You can answer for yourselves for this one. If you had the opportunity to share the stage with any artist living or dead who would it be and why?

Anelise: “Usually I would have said David Bowie because I admire him so very much but lately because of his humbleness and down to earth personality I would have loved to have shared a stage with Lemmy.”

Fabio: “So many people, it’s really hard. I think Mike Patton, he has a massive personality. He has so many projects and he’s multi-talented. It must be quite intense to be around him. So yeah, Mike Patton.” 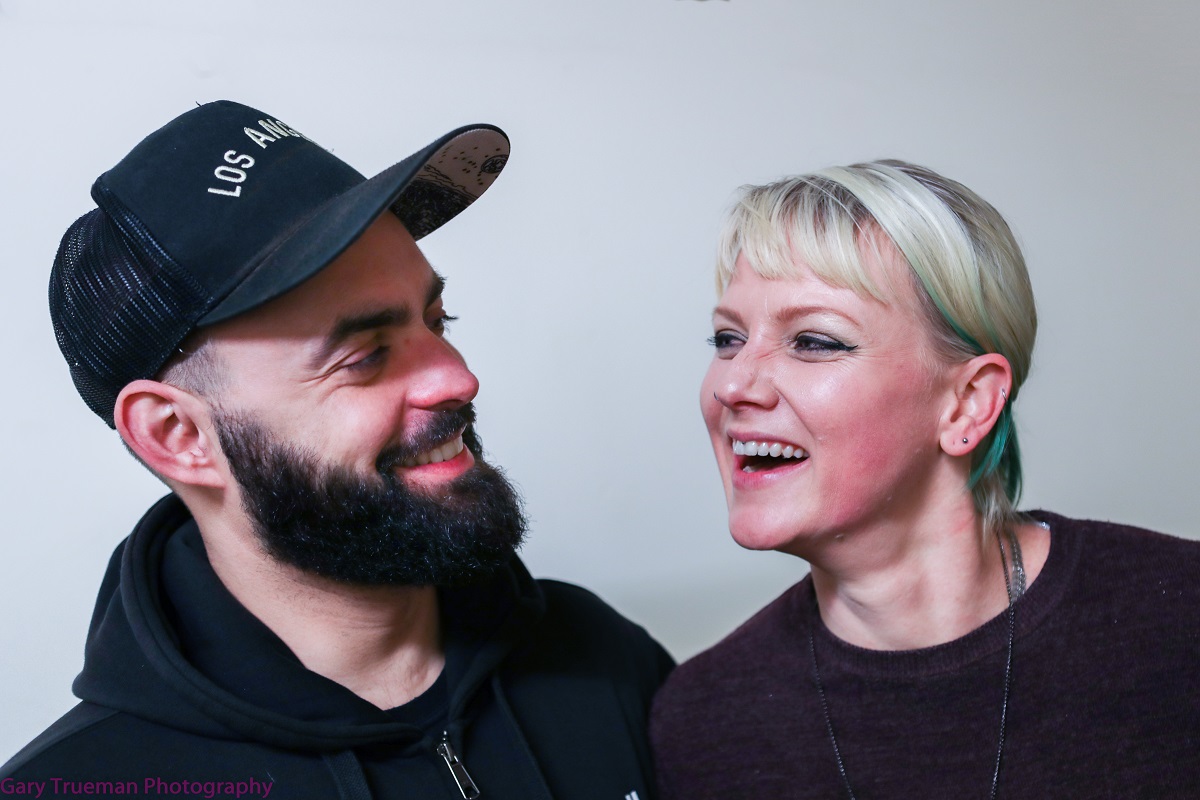 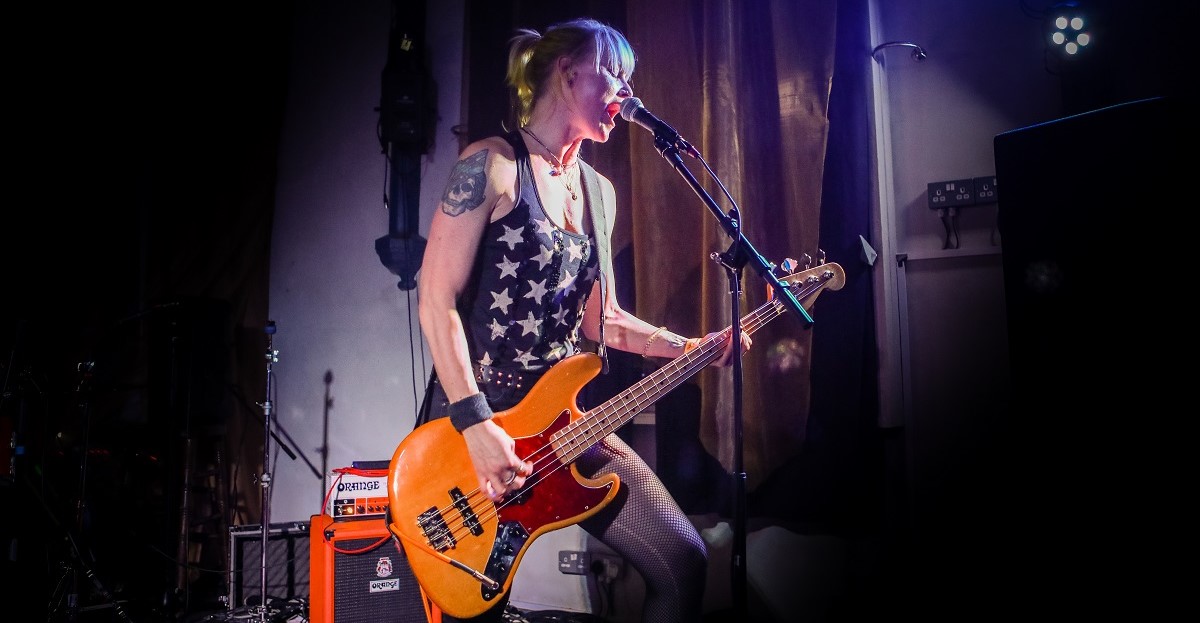 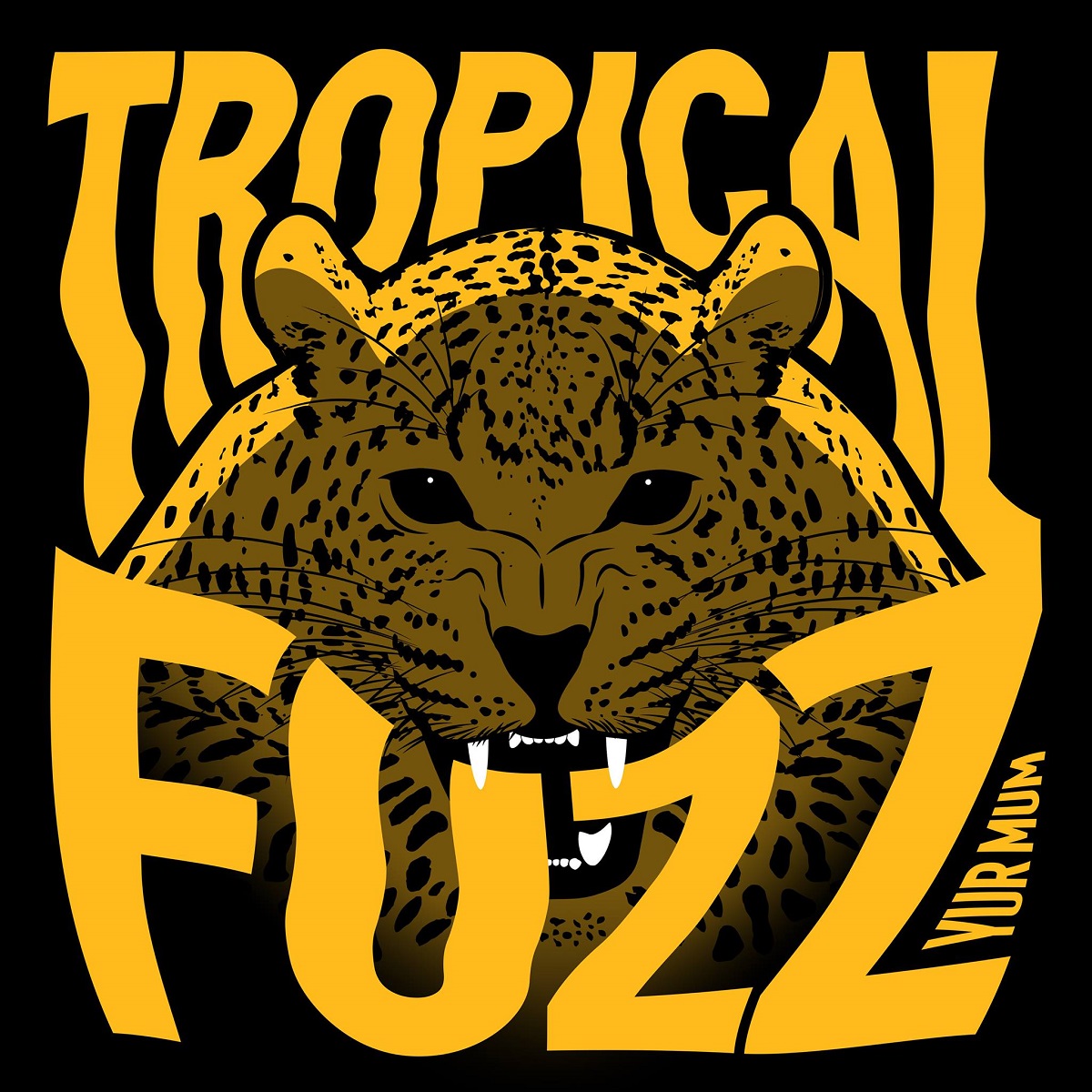 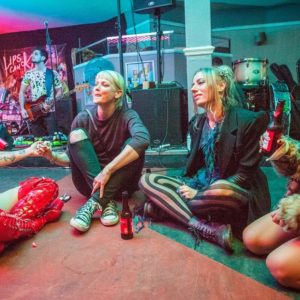