Interview: Freyja Phoria “It would be no fun if we all looked the same.”

Freyja Phoria is a well known figure on the alternative scene. She models, is an artist and makes wearable art.  Instantly recognisable for her edgy pastel goth meets Tank Girl look she is one of those people who inspires others.  Gary Trueman chatted to Freyja about the pros and cons of having such an extreme style and battling against the system as a teenager who wanted nothing to do with conforming to rules on image. 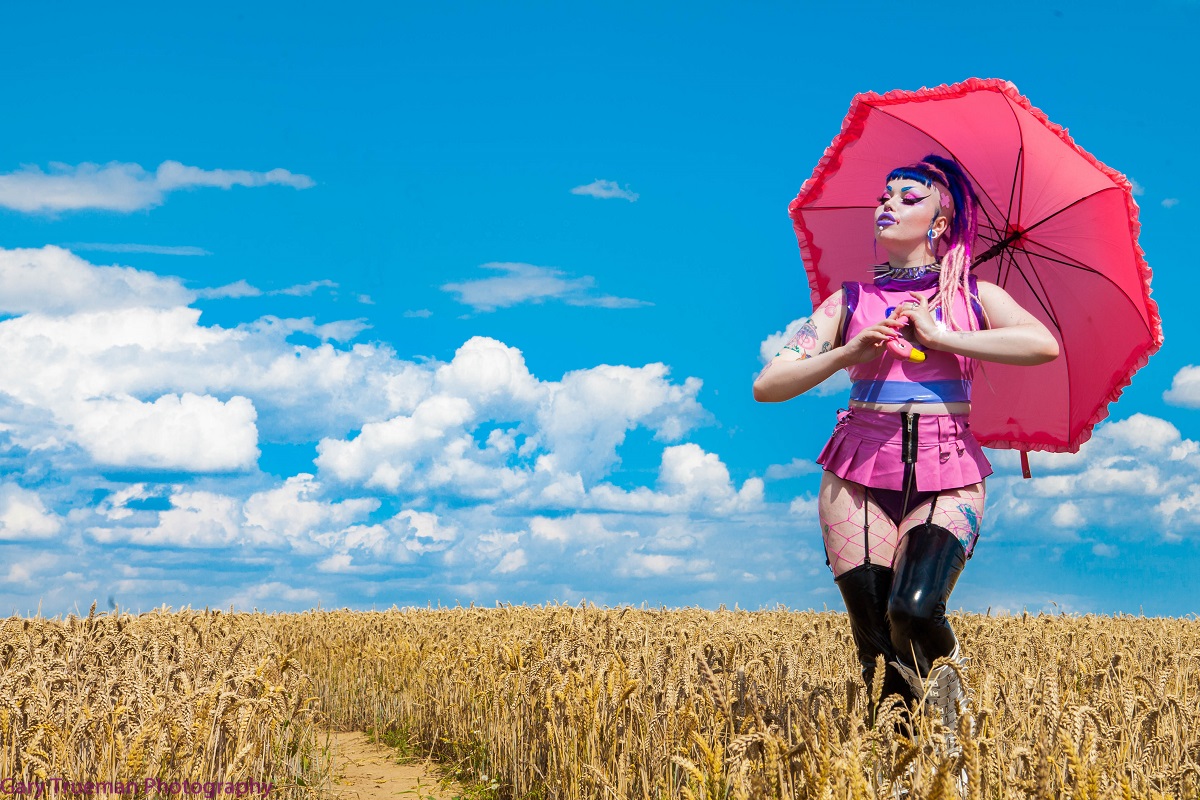 You’re a model, artist and also a performance artist too.  That must keep you busy?

“It does.  I work mostly doing my art and modelling and then on the side occasionally performing at Halloween events and such.”

You have an instantly recognisable and unusual look. A lot of people have said you look like a space alien. Have you found that has helped when it comes to getting modelling work or is it such a niche market that it can hinder you?

“It is beneficial for certain collaborations. It’s obviously difficult getting certain modelling jobs like your basic catwalk shows or photo shoots promoting normal brands. But those aren’t the things I want to do anyway. I’d prefer to create art out of the way I look and find people who want to collaborate and designers that appreciate that. A lot of people do come to me with an idea that is basic and then try to dilute the way I look to fit. I do wonder why you would want to do that. Wouldn’t it be better to enhance it? Why come to me for that when you could go to someone whol looks more normal or who looks more adaptable.”

What are your earliest memories of seeing something or someone alternative and thinking that’s for me?

“I’ve always loved video games and comic books and I’ve always loved looking at strong alien type women. You can tell that their image is true to who they are. It represents a part of their personality. I remember being a kid and seeing girls at festivals, these beautiful goths, and thinking that’s what I want to be. I wanted to create something so otherworldly that no one else had done. “ 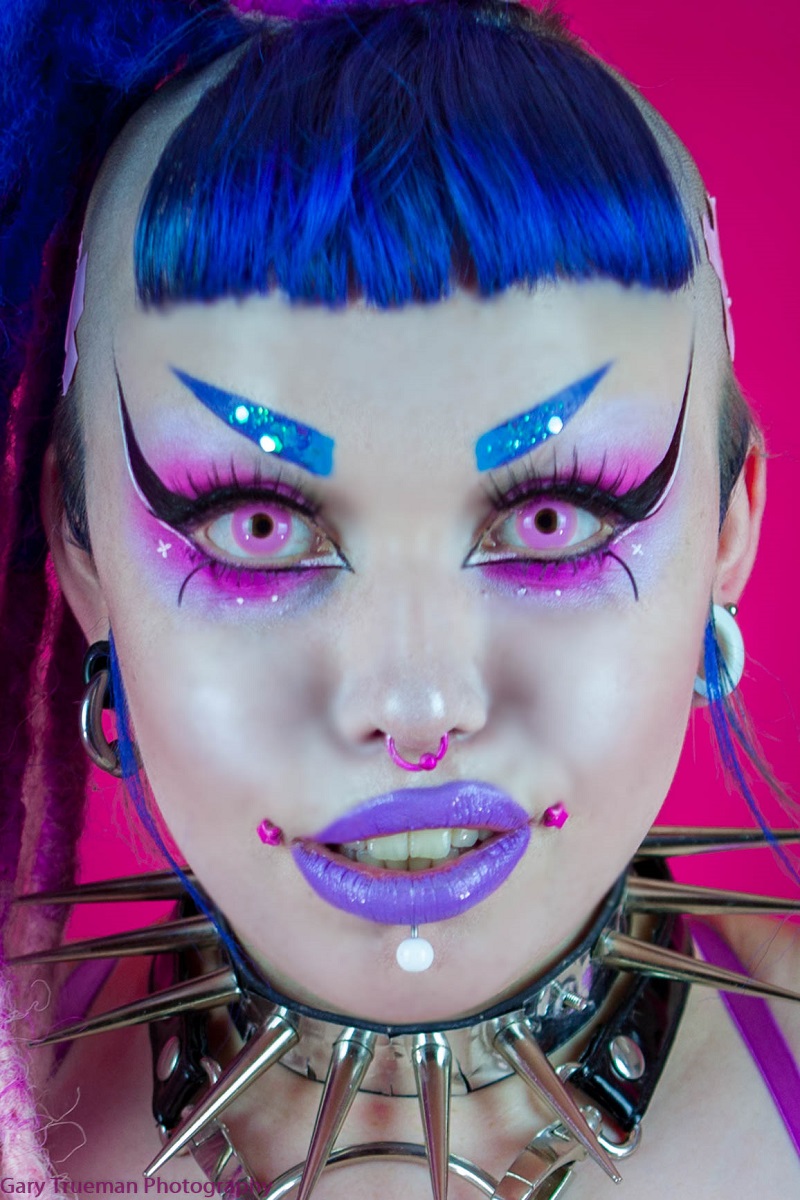 Were you one of the girls at school getting into trouble because you wanted the look but it clashed with the uniform rules?

“Very much so. I was in trouble most of the time for my image. My education wasn’t too great at school because my teachers were more fixated on my hair colour. So I didn’t learn much at school and I didn’t have a very good time. I just naturally rebel against what people want and I felt very pressured by how other people expected me to be. That made me even worse. I just wanted to be true to myself. People think you can just tone it down for school but for me that was such a big deal. It felt like I was suppressing something that was important to me. It was soul destroying having to conform every day.”

Do you think that if the education system itself was more accepting it would teach children to be more accepting and understanding of people who choose to look different from society norms? And by trying to mould the alternative kids into something they don’t want to be they’re teaching the non-alternatives, the majority, that viewing the alternatives as something less is OK? That bullying in effect is OK?

“Definitely.  I think it’s really harmful to create this illusion that different people’s styles shouldn’t be celebrated and that you should just conform. It would be no fun if we all looked the same. There would be nothing interesting. It’s really sad that some people can’t see the bigger picture and that they can’t see outside of the box that they live in. It’s a shame some people can’t appreciate other cultures  because of how closed their minds are.”

What is the most fun thing you’ve ever done modelling wise?

“I had a photographer one time surprise me with an octopus from a butchers (fishmongers). It was quite controversial as I’m vegan. But I thought what the hell this is just going to be in someone’s stomach at least we can try to make something beautiful out of it. We did a whole shoot with dripping tentacles over my head. It caused quite a lot of chaos online. I got a lot of hate for it but I thought it was art.” 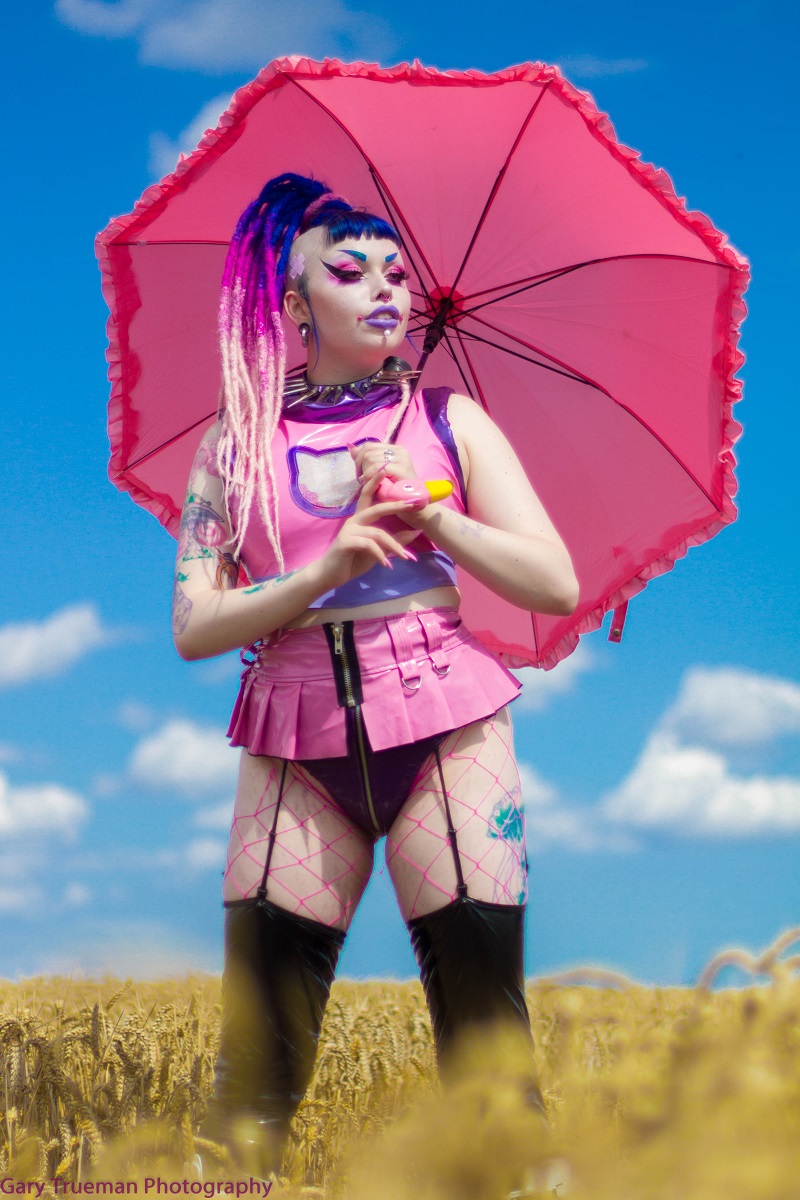 Devolution is always keen to promote model safety. Have you ever experienced any photographers pushing levels or doing anything else that crossed the line?

“So many times. I think every model has a horror story or even a hundred horror stories. It’s something that needs to die out. Things need to be done in a safer way where people don’t try to cross boundaries with us. Sometimes when you’re in a bikini or lingerie some photographer’s intentions are just the complete opposite to yours. You just want to create art and show the world something you’ve done and somebody just wants to ruin that for you. It’s heart breaking to think that every day someone is going through that in a really vulnerable situation. I would like to think that in the future we could have a safer platform for people.”

Let’s talk more about your own look. You have most of your head shaved but then you have dreads too. How long have you had that hair style and where did it come from?

“It’s kind of developed over time. This time last year it was half shaved, then maybe six months ago three quarters shaved and now it’s more or less all shaved. I love the idea of having a small amount of hair that I can put loads of dreads in to make it look huge. It’s like I’m Betty Spaghetti and it’s a really interesting look. I first started shaving my head when I was about 14 and had a kind of death rock look. It does change all the time but at the moment I’m really happy with the Betty Spaghetti look.”

Your make up is suitably bold too with lots of colour.  What’s your favourite colour and what brands do you use?

“I love using Jeffree Star because the colours are really pigmented and there’s a wide range of colours for make up artists and creative people. I kind of go for an 80s goth look on acid with my make up. I like to experiment and at the moment my eye liner is pretty much touching my hair line. I like taking inspiration from different styles from different times.  I do get obsessed with things too so at the moment it’s pink eye shadow. That’ll probably just change completely in 6 months and then I’ll obsess over a different colour. I have always been consistent with the type of style in my make up though.  Big wings,  lots of lipstick and massive eye lashes. And contact lenses too.” 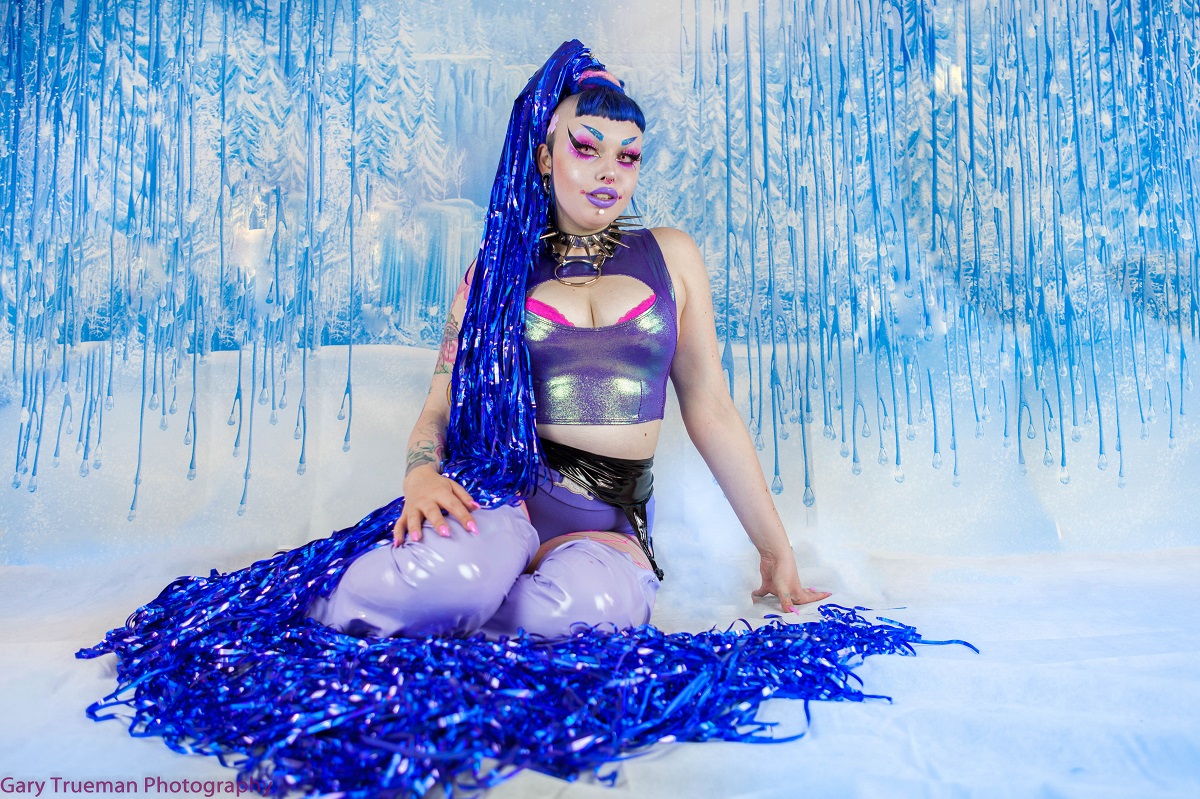 You have the clothes to match as well. Where do you get your clothes from? You have some amazing outfits.

“I’m lucky enough to collaborate with a lot of designers that I know. I think when you have quite an extreme look you attract other creatives. I’m sent a lot of stuff from different designers which I get to model and also get to keep a lot of it.  I’ve modelled for Kiss Me Kill Me and Iron Fist and loads of other amazing designers.”

You do a lot of art and much of it is kind of a cartoon version of you. Is that what you base it on?

“A lot of people say that but it’s not intentional. When you do art you put a lot of yourself into it. The inspirations I have around me, that I look at a lot of the time are things that I put into my own style, and into my art as well. I’ll see a lot of amazing things in books and on Instagram and I put them to one side and them combine it with my own thoughts. And yes I’m quite vain and look in the mirror quite a lot too, so a lot of it goes into my art.”

You put your art onto things you can wear as well.

“I’ve recently been making ear gauges and necklaces. I’m also working on some t-shirts to put on my Etsy store. I love the idea of making wearable art. This year I really want to start working more on my brand. I love the idea that people can walk around and wear my art. I really want to expand and create an entire clothing line at some point. That’s for future Freyja to work on.”

If you could go back in time and give a 15 year old Freyja one piece of advice what would it be?

“I would tell her that she will find a place where you feel confident and comfortable and that people will appreciate what you’re doing. I would reassure her that everything will turn out the way she wants it to so long as she puts the effort in and she believes in herself. I had a lot of confidence issues growing up that have massively changed since I became an adult. I still have insecurities like anybody but I am a confident person. It’s easy to hate yourself as a teenager but things do get better.” 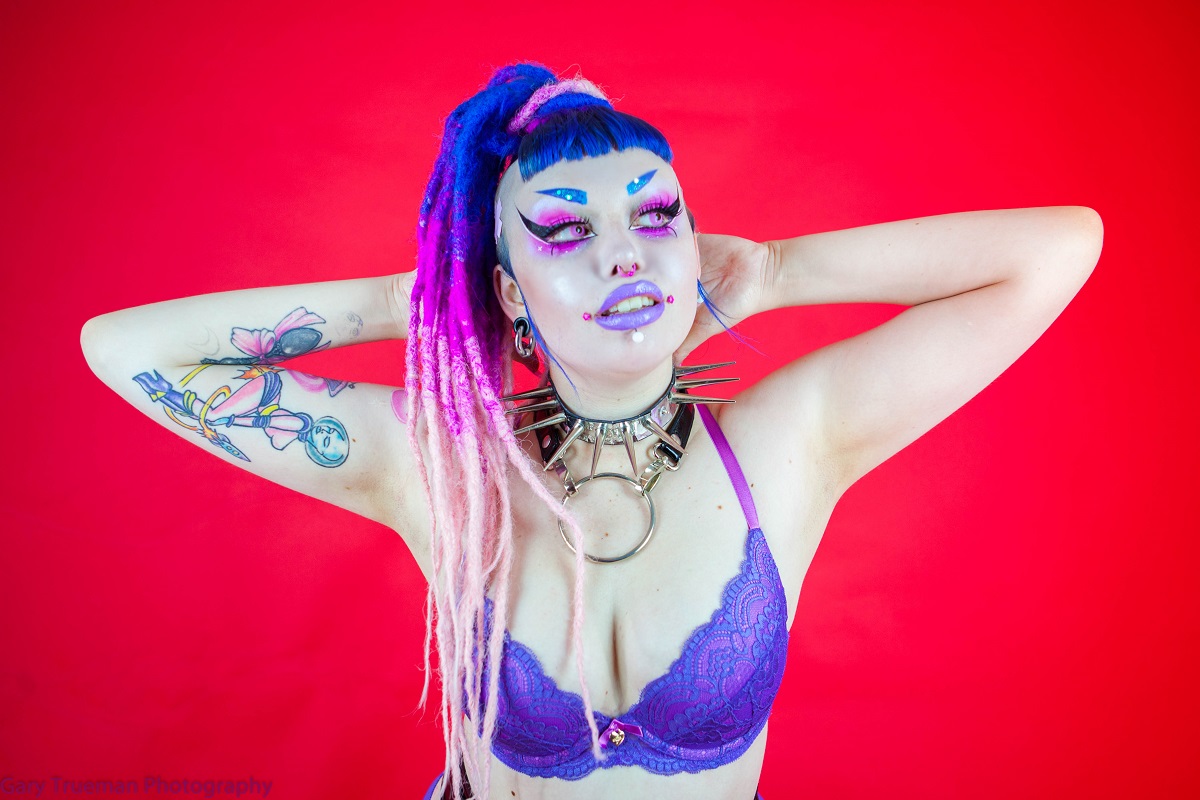 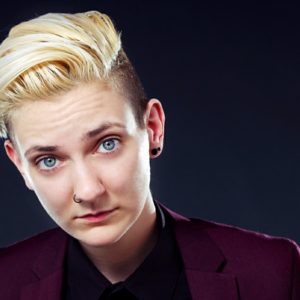 Sally Pepper is a young singer and song writer who has added a bit of punk venom to the usual acoustic solo fayre people...
Copyright 2017 Devolution Magazine. All Right Reserved.
Back to top