Interview: Puss Johnson “. I’ve always had a bit of an obsession with leopard print.”

Puss Johnson isn’t someone you’d lose in a crowd. Her feline style complete with tail is legendary in the punk world. Her band Pussycat And The Dirty Johnsons have a reputation for scintillating live shows where Puss will often jump down and sing to fans one on one. Gary Trueman chatted to Puss about the band, her leopard print look and who she’d most like to share a stage with. 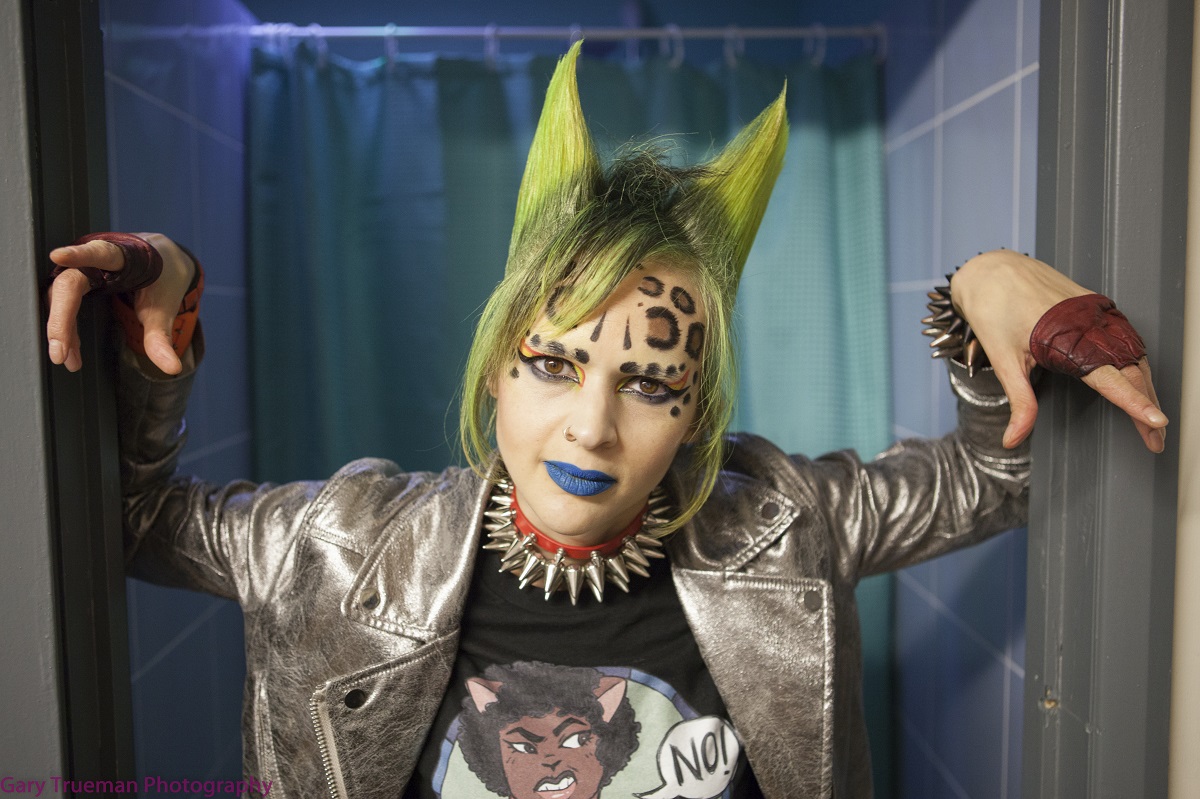 You bring punk and rockabilly together so who are your main influences?

“I’ve always been into a wide range of music from Captain Beefheart to psychedelic 60s funk to punk and 50s rock and roll. I think it all just gets a bit mushed together and then that’s our sound.”

Your latest album Ain’t No Pussy has done really well and both critics and fans seem to like it. Muically it’s quite a lot more expansive than what you’ve done before, people have been commenting that you’ve reached out quite a bit. Do you think that’s just the band growing onto itself or was it a more deliberate move?

“It’s never deliberate, I just sit down and whatever comes out comes out. I take what I’ve written on the guitar and vocals to the band. Sometimes I’ve got ideas on how it’s going to sounds and sometimes I just say do what you want and it just comes together.”

You’ve had a busy 2018. What have you got planned for next year?

“We’ll definitely be touring and hopefully we’ll have something new recorded next year too. It’s early days for that though.  We will be on tour though and we will be going abroad too.”

You have a very recognisable stage image and you’re not often seen out of your feline persona.  How did you get into that look in the first place?

“I think it just grew really. I’ve always had a bit of an obsession with leopard print. Then one day many years ago I wondered if I could make my hair like that. And voila, you’ve got me.”

Is it a difficult look to maintain?

“Not really, I mean all my clothes are a bit loud. The stage make up takes me a couple of hours to do, and then the hair.” 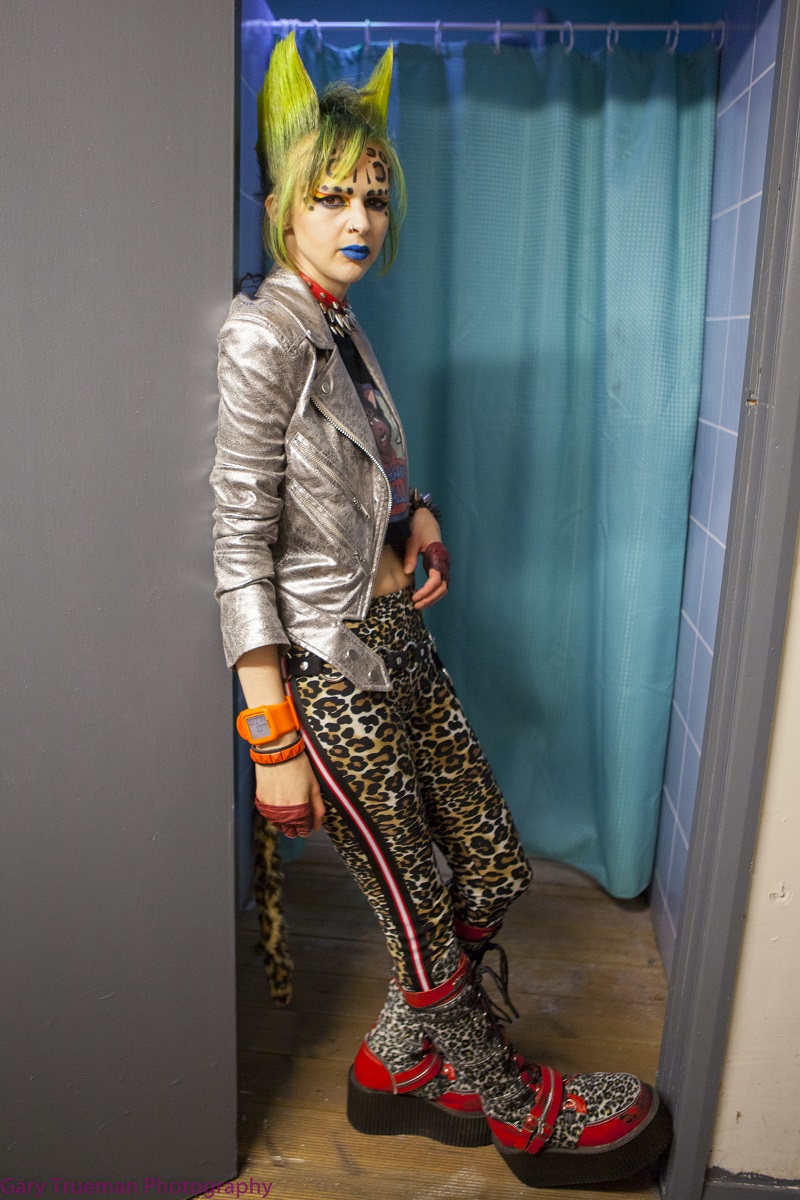 You eat a plant based diet so presumably your make up is cruelty free? What brands do you use?

“I do have some of the product of she who shall not be named, I heard someone call her Kat Von Measles the other day.  I’ve got some Urban Decay and Sugar Pill, and some other bits and bobs. I like Sugar Pill’s colours.  And Nyx Epic eyeliner obviously. Everyone has got to have one of those.”

You’re diet pretty much excludes meat and cats are essentially carnivores. How does that translate?

“As far as I know you can get vegan cat food. There are a lot of arguments about it online about whether you should give your cats vegan cat food or not. I don’t have a cat though.  I did try cat food when I had a cat, I also ate cat food whilst sitting on a pile of trash for a photo shoot, but I have never tried vegan cat food!“

With your bold look and being the focus of the band it’s inevitable that you’re going to get audience comments and even misogynistic stuff. How do you deal with that?

“It doesn’t usually happen on stage it usually happens when I’m selling merch. People will come up and say things. I just kind of tell them where to go. It can be difficult if you’ve just sold someone something and they say something weird. There’s not much you can do about it at that point.” 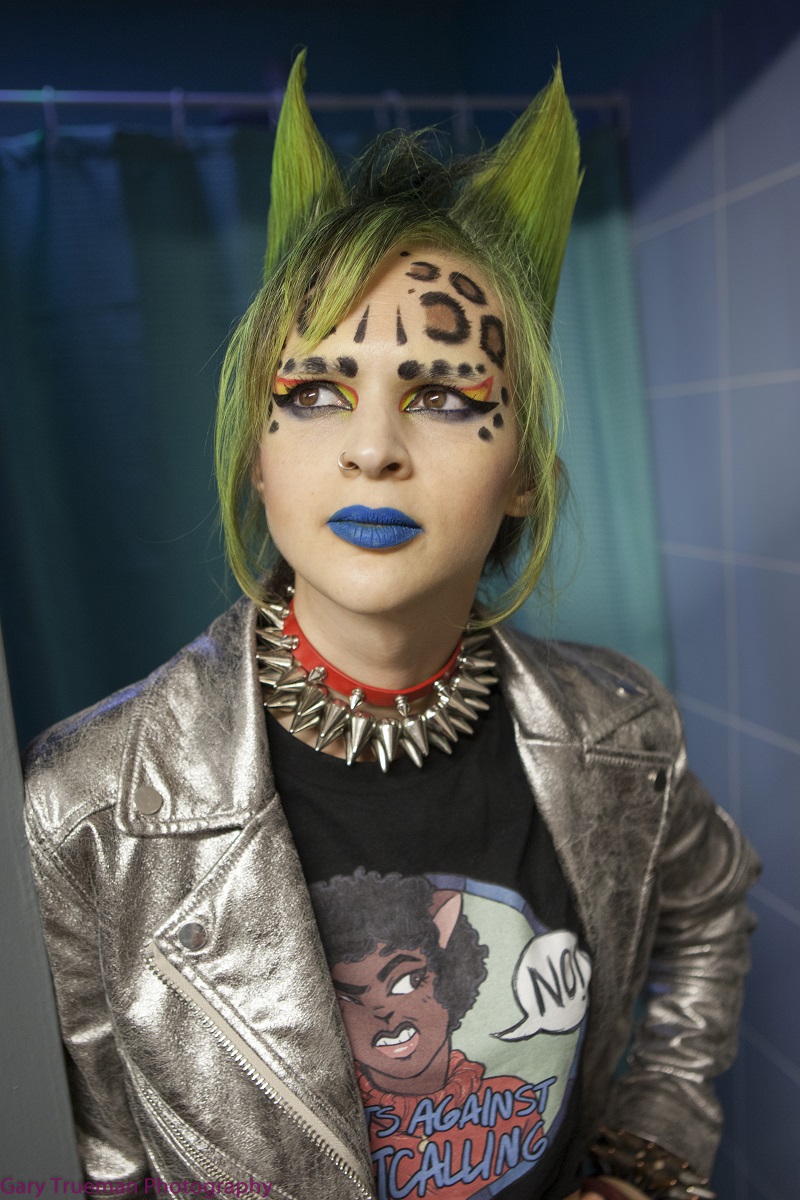 Conversely you get great reactions too. Have you had anything positive happen that’s particularly memorable?

“The one thing that does stick in my mind but it’s because I’m a complete fan girl, it was when we supported the John Spencer Blues Explosion. When we came off stage John said hard act to follow and I was a big compliment to me because I really look up to him. I think he’s an amazing performer.”

So if you were performing who would you most like to come up and share the stage with you…. John Spencer?

“Definitely. When I first started to go and see him in about 2002 I was just blown away by his performance. He was like a rock and roll preacher man. I’ve never been to a bad gig, he’s just the consummate professional.”

If you could have one law in the world that the world would have to adopt what would it be and why?

Puss JohnsonPussycat And The Dirty Johnsons

Review: A Void - Awkward And Devastated 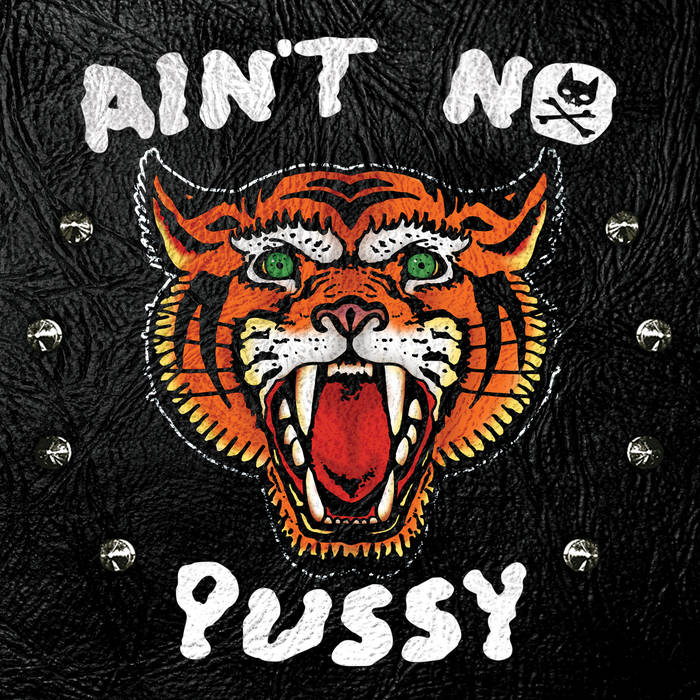 Review: Pussycat And The Dirty Johnsons – Ain’t No Pussy

A brilliant band all round and in every department, seen them twice and need to see them again. Puss is one dynamic front woman, got all the albums and quite a bit of merch. Love them. 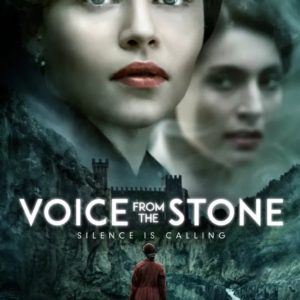 6 Days, 6 Movies, 6 Reviews : 5. Voice From The Stone During the last decade, I have challenged myself to watch 31 films...
Copyright 2017 Devolution Magazine. All Right Reserved.
Back to top