The Rebellion Tapes: Pizzatramp “We’re Going To be The Biggest Band In Europe Next Year.”

Sam & Jim from Pizzatramp play “Do You Feel Lucky Punk” the Devolution random question generator at Rebellion Festival and Sam’s luck is certainly in as they answer questions on their favourite video games and why it’s never a good idea to use the phrase “I’m not racist but” even when you aren’t being racist. 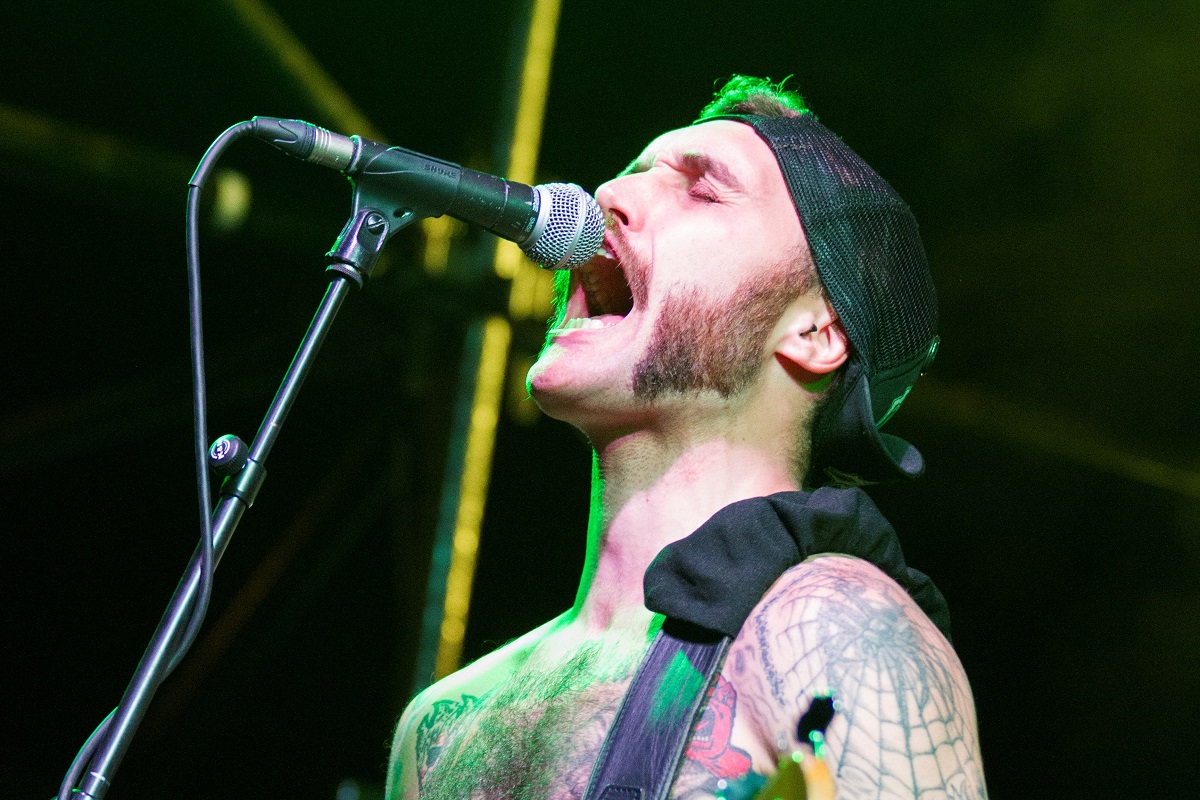 Sam “What are we hoping for? What are the good ones?”

Sam “Three threes and a four, that’s alright. Do you know what we should do? We should write it down and then whatever it lands on that should be the time signatures of the next songs that we write”

Do you have any plans for next year?

Jim “We’re going to be the biggest band in Europe next year, because we’re better than all the other bands”

I suppose if your touring America the drummer can’t escape

Jim “No, once we’ve got him over into America he’s got to do the gigs no matter what”

Two and thirteen, when you write an album do you have a main songwriter or is it a collaboration?

Sam “All of us chip in. Like obviously me and Jim mainly write the vocals for it, but music wise”

Jim “Our drummer plays guitar as well so he writes all the songs.”

Sam “Yeah, it’s a group effort. Once the songs are written we basically figure out who can sing over what, and then”

Jim “If it’s hard I make Sam do it, if it’s easy then I’ll sing over it. Because I’m not very good at my instruments.”

Call Of Duty, Need For Speed, or Zelda?

Jim “All games are shit if it’s not Zelda, fuck it. Ocarina Of Time, the best game ever. I got it on Christmas Eve when it came out.”

Jim “Fuck Judith then she wants to learn how to play Mario.”

We’re on a theme here, Neverwinter, Fallout, or Skyrim?

Jim “Fallout, every day. Basically at some point in the future everyone should have played Fallout because we’re all going to be dying in the nuclear winter.”

Sam “So prepare yourself type of thing.”

Jim “Yeah, basically it’s a roleplaying game where the world’s fucked, and there’s been a nuclear war so, and that is going to happen pretty soon, isn’t it to be fair.”

Sam “Yeah, if the fucking Tories stay in”

Jim “(laughs) If the Tories stay in.”

Jim “The Tories are going to make it.”

Jim “You should play dice for a living.”

If you could remake any classic game which one is it?

Jim “Come on, not a video game thing.”

Sam “If you get four sixes I’ll suck you off.”

Jim “I’ve got two, you can take half a length.”

Sam “I’ll lick your balls for that.”

For the instruments that you play, who are your favourite musicians?

Sam “Of all time? Oh man, I don’t fucking know, there’s too many. There’s so many good fucking players.”

Sam “Well no, there is though innit?”

Jim “It’s any musician in Bad Brains or Minor Threat innit. Ian Mackay, that’s the one. Do you say Ian McKay or Ian McKie?”

Sam “So McKay then.”

Sam “I just like anyone who actually plays like they’re fucking enjoying themselves. I hate bass players that just stand there, just going through the motions. It’s like fucking play it man. It’s not like you’re fucking jerking off or anything.”

Jim “In the rest of this interview if you get two more sixes I’ll suck you off, and it’ll be the best blow job.”

Favourite film and why?

Jim “The top three films counting down are number 3, Goodfellas, number is Scarface, and number 1 is Grease. Grease is better than any film ever made. And everyone in the cast is dead. Everyone either died or pretended to be dead. I think Olivia Newton John’s husband pretended to be dead for about twenty years, and he wasn’t. On a ranch in Arizona or something.”

Jim “No, she thought he was dead.”

Jim “Why would you cheat on Olivia Newton John.”

Sam “I don’t know, have you seen his new bird?”

Jim “Why would you cheat on that man? You’d just go every night put on a catsuit and dance round.”
Sam “Have you seen his new bird?”

Jim “What? Is she hot?”
Sam “I dunno, that’s what I mean. So you can’t comment on it, yeah he left Olivia Newton John, but his new bird might be the fucking world.”

Jim “She’s definitely not as good as Olivia Newton John.”

Sam “Oh there you are, I got another one. One more you’re noshing me off.”

Sam “Fleetwood Mac. I dunno, who else?”

Sam “Loads of bands, we all listen to loads of different styles of music, we’re not like strictly… we don’t jump in the van and go we need to listen to hardcore punk, man.”

Jim “Well I do, they make me listen to all this shit.”

Jim “Oh yeah, but, just put on Black Flag or Minor Threat. They’re just better than everything else.”

Jim “So one more six and what is it, you owe me twenty quid?”

Jim “We’ll go in the toilets.”

What’s the dumbest act anyone’s ever done on stage?

Sam “It’s got to be something that you’ve done.”

Jim “What have I done that’s really dumb? Oh, I know, we’ve got a song called The Idiot’s Guide To The Internet and we did it in Southampton”

Sam “Be careful what you say now”

Jim “It’s an anti-racism song, it’s about the fact that everyone in the 70s, 80s, 90s, and whatever believed what the papers said. The Daily Mail told you to be a racist, because they’re fucking racist, which is still not acceptable, but everyone’s being influenced. But now everyone’s got a smartphone, no one’s got any reason to believe anything anyone says. You can just Google it and find out they’re lying. So we did a song about that, but somehow I managed to make an anti-racism song, I made a joke, and somehow I made it a racist song, and everyone’s what are you on about. And as I’m trying to bail out of it I said the line ‘I’m not racist, but’ and everyone going what are you on about and they’re looking at me, Jim, what are you raging about? I’m I’m like I’m trying to be anti-racist because I am, and somehow I’ve ended up turning into a Nazi. So that was the stupidest thing that ever happened so now we can’t play Southampton anymore because if we go down there loads of skinheads are going to show up going ‘fucking yeah, what you said last time’ but it was all…”

Jim “Fuck the skinners, oh that was another one wasn’t it. That’s a separate occasion, just as bad.”

Sam “Tell him about that one”

Jim “There’s a band called Skinners from Bath and Harry who’s the bassist in them, the bassist was in a gig we played in London, and he went do this song. So we did a song called Slamdance Suicide, so we went this song’s for Skinners, which is the name of their band. So we do this song and it starts ‘If you want to slamdance do it in front of a fucking train’. It turns out there’s a big skinhead contingent in there, not racist ones, good ones, and it turns out after we play everyone’s going to kill me because they think I’m slagging off the skinheads and telling them to jump in front of a train, when I was like no. But I didn’t know what they were on about, and they wanted to kill me, and I’m like I don’t know what you’re on about, and they’re like you were slagging us off on stage. Turns out I wasn’t, I just said this song is for the Skinners, a band. Everyone thought I’d said this song is for the skinheads and I wanted them to kill themselves in front of a train. So they all tried to kill me, but luckily they all had a massive fight with someone else and we got away.”

Sam “That was a fucking good scrap that was as well.”

Jim “It was a really good scrap wasn’t it. We just made fags and watched them.”

You’ve been asked to support a band, who would you want to be headlining?

Sam “Without a doubt.” 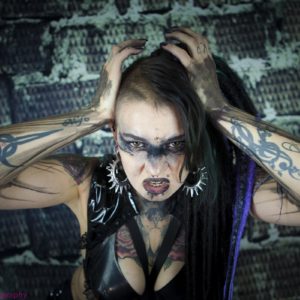 You get a lot of alternative models that look amazing, own that pin up style and are sassy too.  Not many though can match...
Copyright 2017 Devolution Magazine. All Right Reserved.
Back to top