You get a lot of alternative models that look amazing, own that pin up style and are sassy too.  Not many though can match Blasphemer aka Harriet Orman when it comes to being a total bad ass. This is a girl who can rock a boudoir shoot but looks frighteningly more at home wielding a machete, or an assault rifle. Here she chats to Gary Trueman about her influences, her look and who she’d most like to gender swap with. 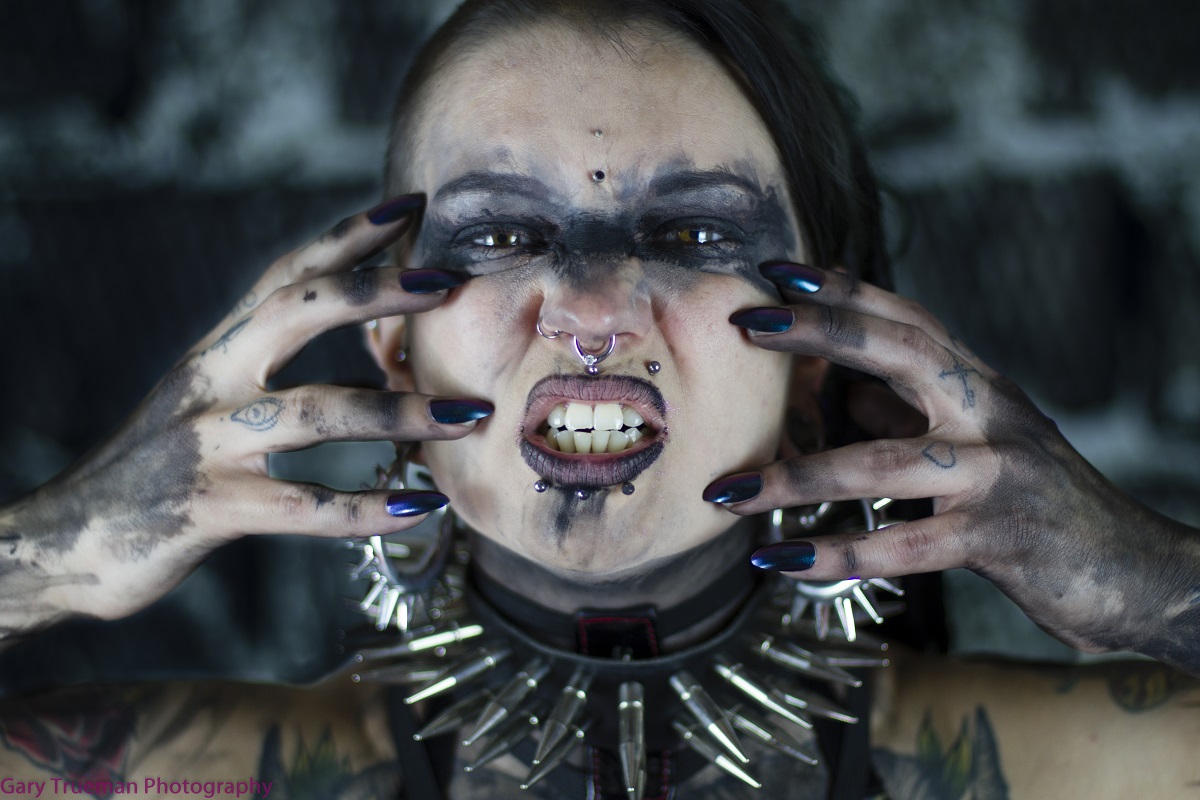 You did modelling for a while before taking a break and then started again.  How did you first get into being a model, why did you take time out and what made you go back in to it?

“I used to model many years ago for a friend called Mark who was interested in setting up his own modelling business. I got interested in it because I love fashion, I love the alternative culture and it’s something I always wanted to do. It’s a creative outlet for me. I stopped modelling for a while because I went to college and then I went to university. Ever since graduating I’ve found it quite difficult to get into the film industry so I thought if I combine my make up skills, my fashion sense and my modelling ability then why not pursue it with full force.”

You’re someone who snaps through poses quickly. Is that something you like to do, to work fast?

“I think things flow better when you work faster. I do prefer to work that way absolutely.”

Are there any people in the industry that you take inspiration from?

“I’d have to say Shelly D’Inferno, she’s definitely a force to be reckoned with. I’m very inspired by her diversity and the fact that she is quite a chameleon. She’s very professional and she’s very interesting with her body and the poses she does. She’s the person who inspires me the most.” 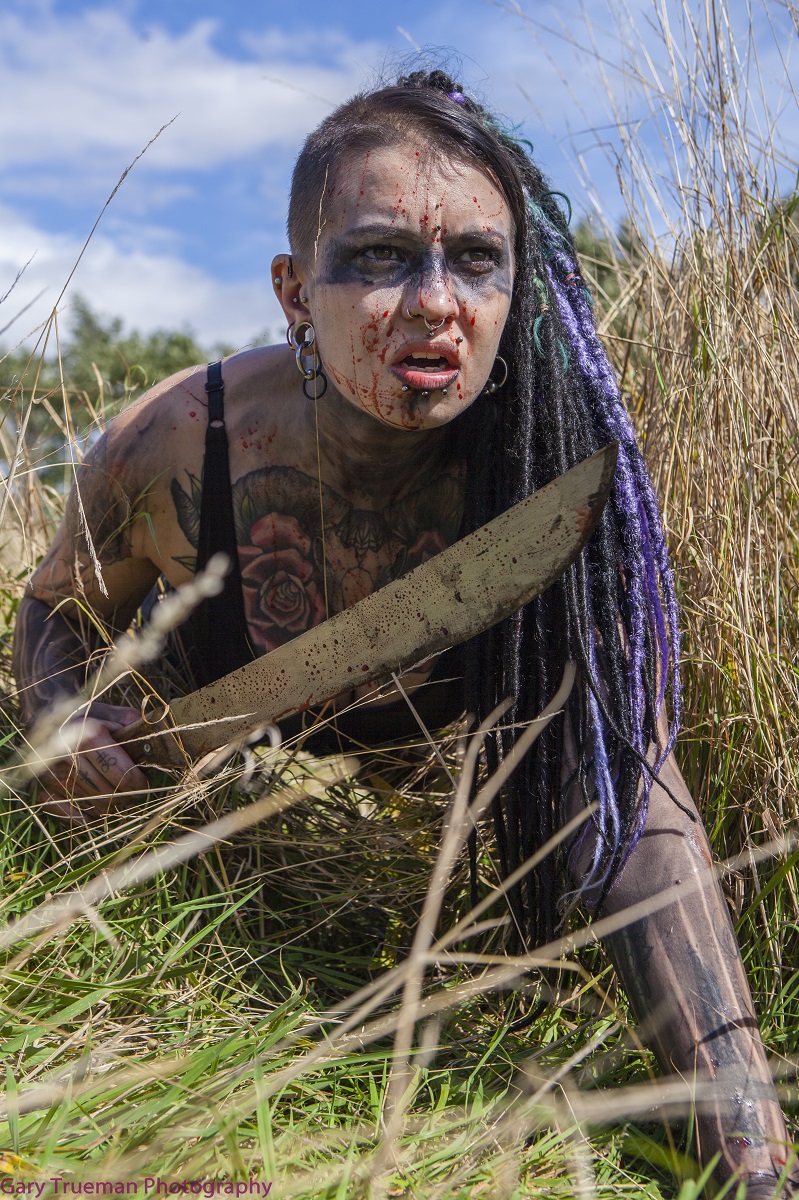 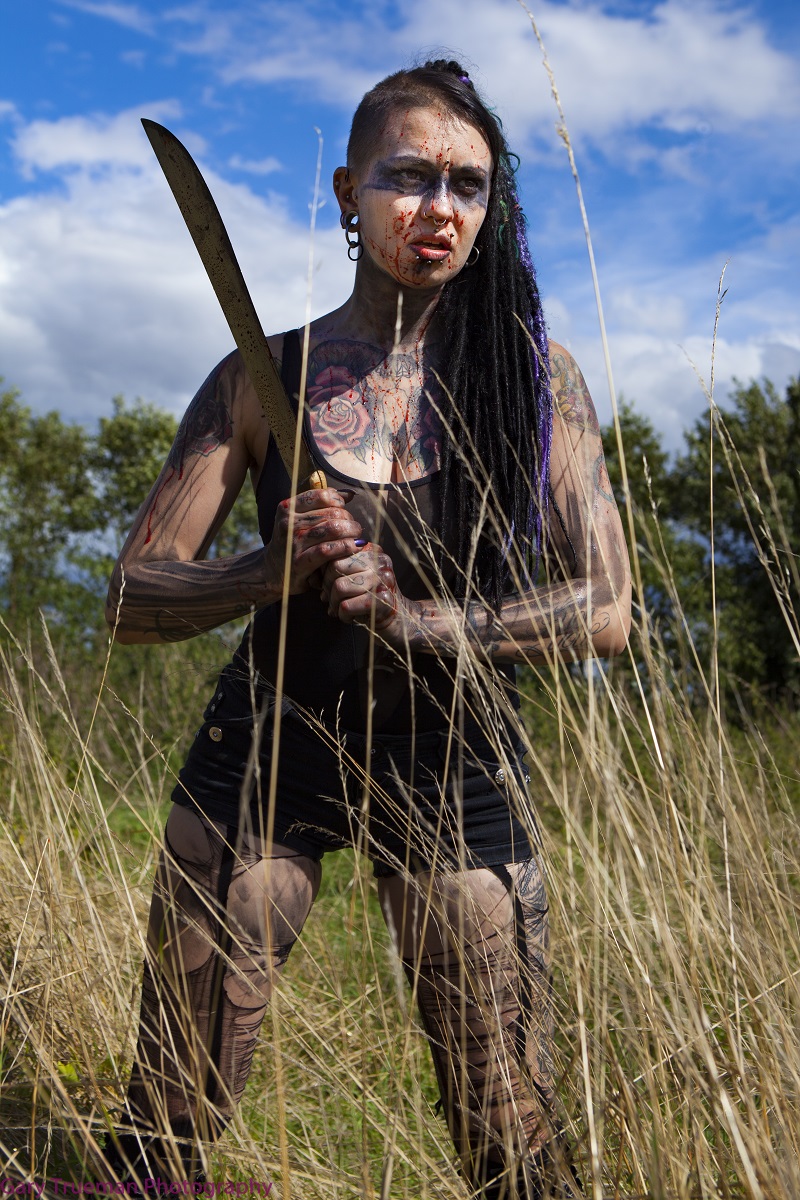 You have quite an aggressive look, you’re heavily tattooed combined with a shaved and deadlocked combination hair style. Do you think that sets you apart from a lot of alternative models?

“I wouldn’t say it sets me too much apart, there are a lot of girls that look like me. I think being alternative is what you make it. Influences within the alternative aesthetic can be anything, music, fashion, art, so everything that surrounds me I am influenced by. So I wouldn’t say I’m necessarily different but it is my own interpretation.  The best way to describe me is a goth at heart with a punk attitude.”

Looking more closely at your personal style.  You use cotton dreads, do you make them yourself or do you source them from someone else?

“I buy my dreads from a variety of different places. The dreads I’m wearing for this shoot have been made by a lovely lady called Ledida Homespun.  She made these for me to model in and to keep so I’m very lucky.  I’ve bought dreads off her in the past.  I do buy dreads from all over the place, Ebay, Etsy and I have a lovely friend who puts them in for me.”

What are your preferences make up wise?

“There’s a lot of make up out there and it’s becoming more in your face and one of the companies I use a lot is called Pretty Zombie Cosmetics. They do the bright purple and bright blue lipsticks which last a long time.  They’re also vegan and cruelty free and they’re quite cheap for what they are, you can get a decent amount of product for your money. Anything that is cruelty free and has natural organic ingredients is better. A lot of big brands play it safe and I like loud and over the top.” 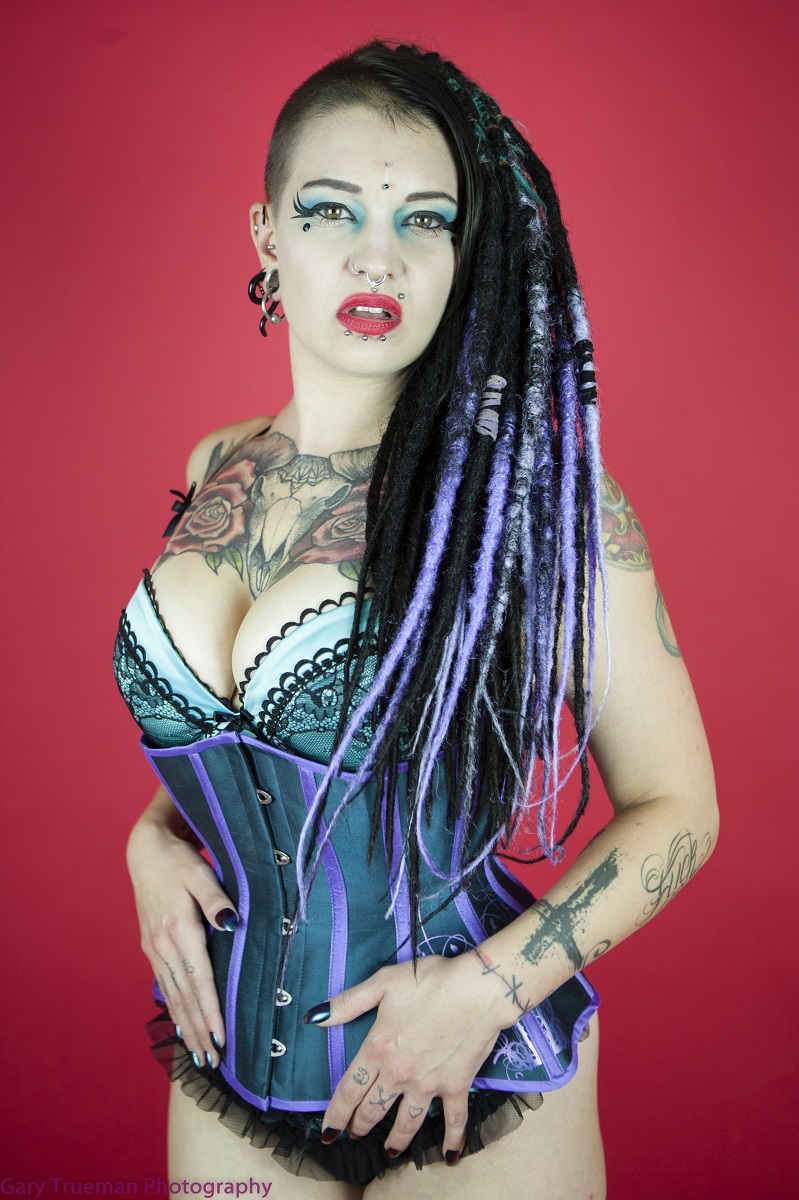 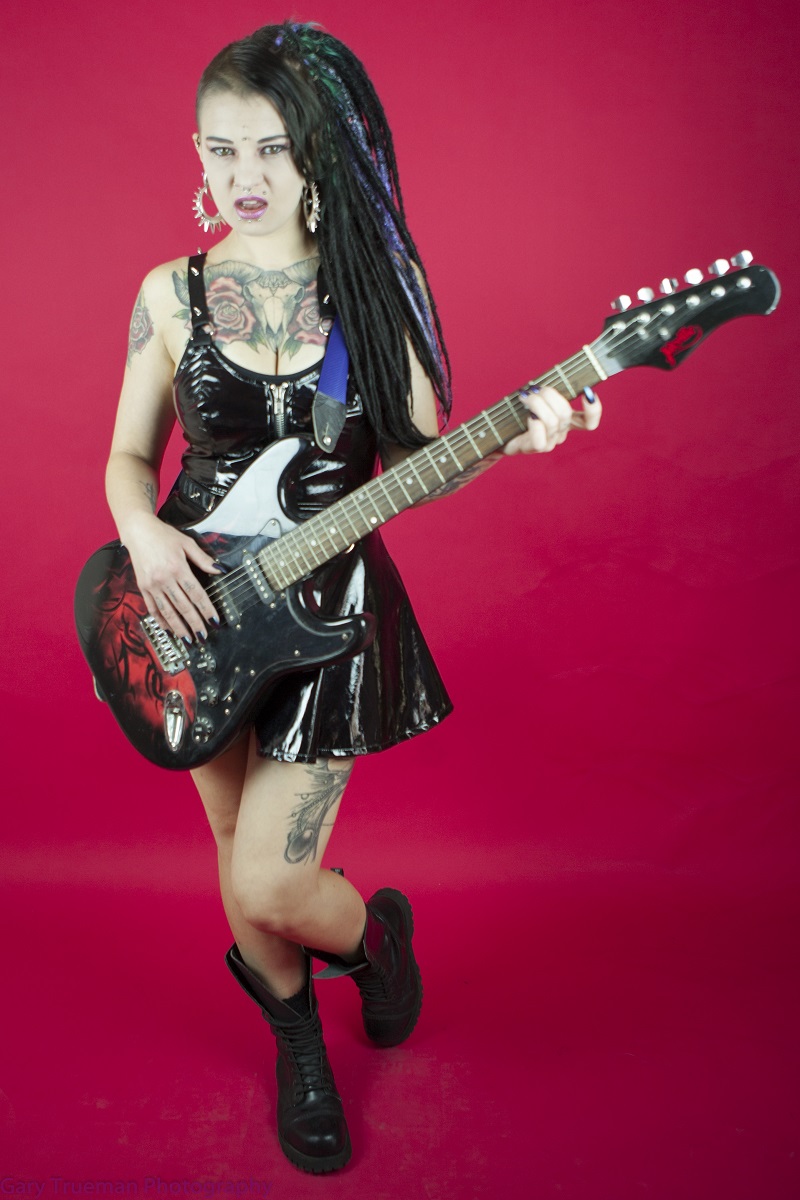 Who do you gravitate towards fashion wise?

“I’m a sucker for Dolls Kill. They’re a brand that aren’t that old and they specialise in the unusual, the loud and punk style. Anything over the top is my love. Most of the time I like looking like a drag queen.”

Where’s the next step for you?

“My modelling has really taken off over the last two years and I want to get my following up even more. For the future I would love to have my own calendar and model for more clothing brands.” 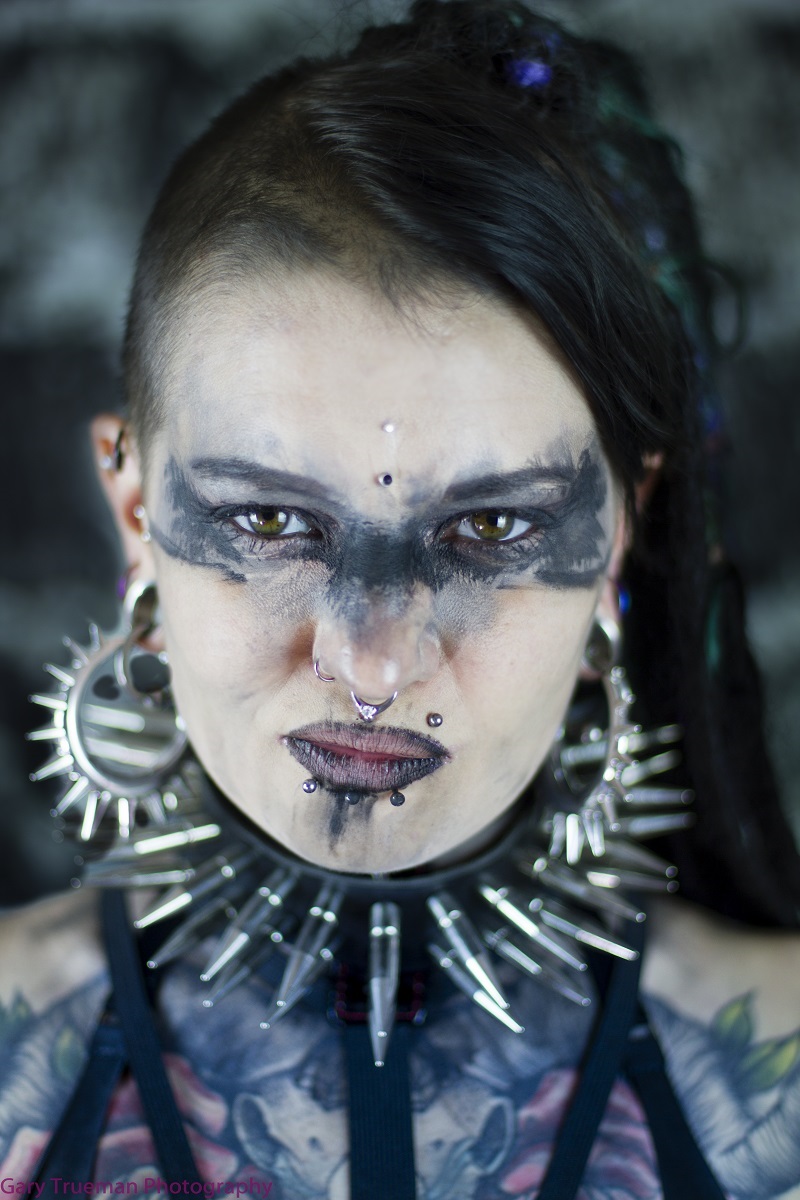 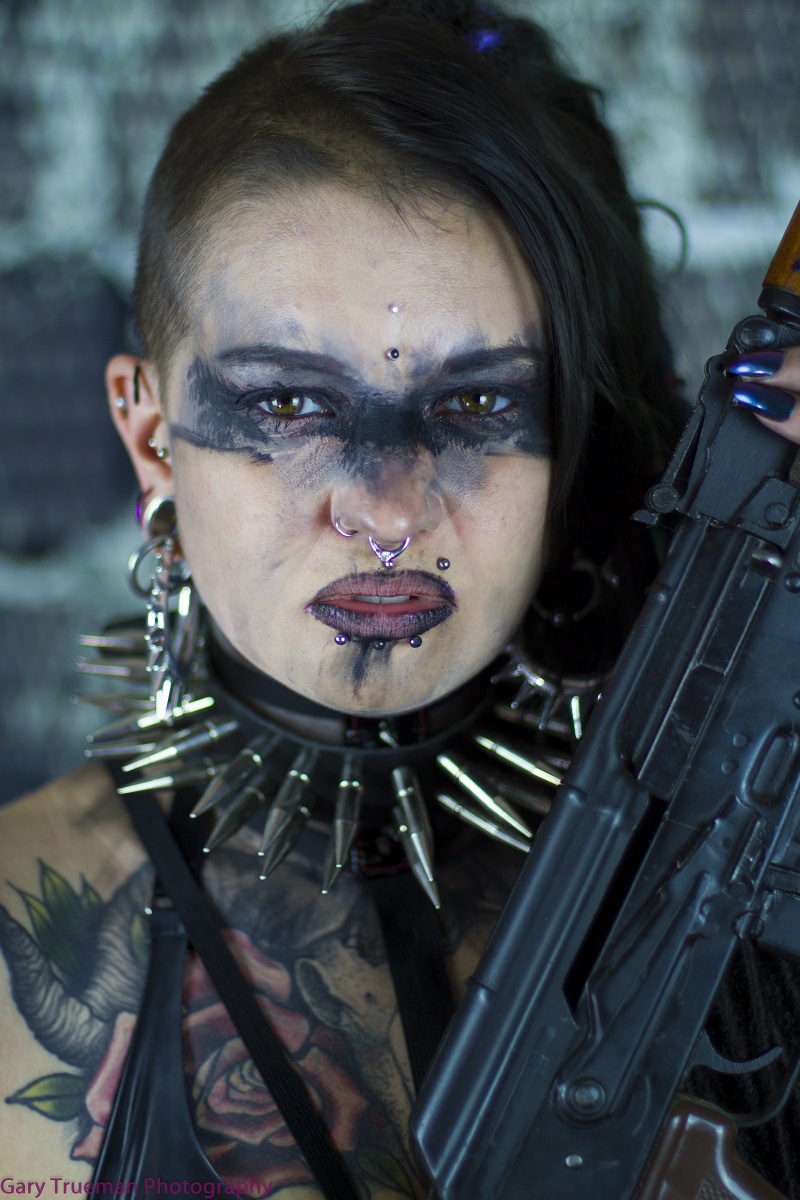 Who would you love to emulate as a model from a film character?

“One of the shoots I’ve always wanted to do is Lara Croft although I know it’s been done quite a lot. Her character is very strong and I used to love her when I was a kid, I had all the games. Apart from that anything to do with X Men. I would love to be Nightcrawler, a gender swap Nightcrawler.”

The Rebellion Tapes: Pizzatramp "We're Going To be The Biggest Band In Europe Next Year." 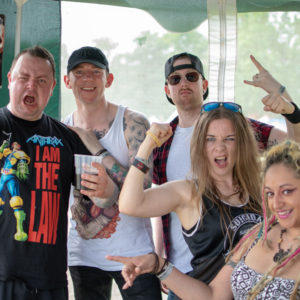