Interview: Pulverise – “The sky’s the limit right, I want a llama.”

Darren, Tom, Vicky, Luke, and Jojo chatted to Devolution Magazine back at Breaking Bands Festival, where they discussed their forthcoming album, how to sell the smelliest car in the world, and Vicky’s love of Llamas. 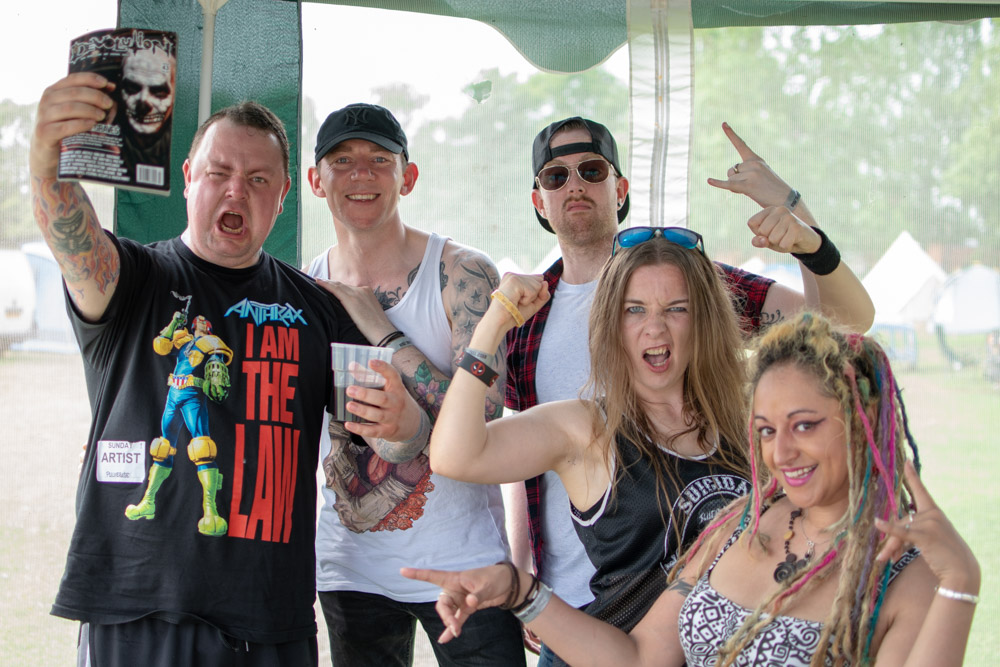 Do you argue over what music gets played on the way to a gig? Who wins, and what’s the most popular choice?

T “Erasure”
V “We all concur.”
D “Well that’s a bit of a…”
J “We go in different cars so if he come with us (Luke) he usually ends up having to listen to old dance hall ska and reggae, or Classic FM.”
L “But I like it because I can just sit in the back and read and I’m like this is the dream.”
D “And me and Fairy and Tom we just decide on some funk or old school hardcore.”
V “It’s actually pop from my party playlist that I subject them to, and they pretend not to like it.”
D “Yeah, I switch it off.”

If you could name any one item that would be delivered, no questions, on the band rider, what would you choose and why?

J “Dan, you’re the one with all the demands.”
V “He’s a diva.”
D “Good question. Rum, of course.”
L “Really? After all that build up? Rum?”
D “Yeah.”
L “I was hoping for like double ended dildos or something, but…”
D “Be serious though you fucking knob.”
L “I am serious.”
T “I would ask for Alicia Vikander wrapped up.”
L “Now that is a good demand.”
T “Now we’re thinking.”
L “And you don’t even need to ask the question why.”
J “I’d be happy with a nice pot of tea to be fair. Yorkshire tea mind.”
V “I genuinely legit want a llama, that can carry all my drums on and off stage.”
J “Oh my god yeah, I’d have a llama, that brings me cups of tea.”
T “Llammy”
J “Llama tea.”
V “The sky’s the limit right, I want a llama.”

T “Do we have fans?”
L “What’s the message?”
D “I do actually. Everyone who has time, and wants to listen to us, like today, new fans, old fans, that actually spend money and time, awesome. Thank you. Really appreciated.”
J “Lyrically as well, a lot of the songs are about empowerment and owning yourself and just letting go. Life’s too short to be stood there and not having fun, so that’s why the party core is like the therapy of party.”
T “And people can be themselves.”
L “Enjoy yourself.”
J “No judgement.”

Do you have a band joker? If so, who, and what’s the dumbest thing they’ve done?

Do you have an album, EP, or demo release that you can tell us about?

V “We are looking at a September release for our mini album. We’re going to do a Pledge campaign first, so we’re just sorting all the rewards out and trying to see what demand is at the moment. And to all our surprise I think we put this up as a joke and the number one thing that people want to pledge for is to go for a KFC with us.”
D “I’m straight down with that.”
V “That won out of everything.”
L “I’m going to be so fat.”
D “KFC chicken.”
J “That’s a lot of KFC.”
V “Once we’ve eaten all the chicken and we get some money we’re going to release the album in September and have a big album launch and it’s going to be amazing. Can we announce the name yet? Or is that too soon?”
D “Whatever you want to do.”
V “Okay, the album’s going to be called Chaos Games. Which Luke came up with and we love it, so yes, Chaos Games, September. Let’s have it.”

You’re stuck on a night off mid-tour with just a games console and a handful of games for company. Call of Duty, Zelda, Need For Speed, or just raid the mini bar? 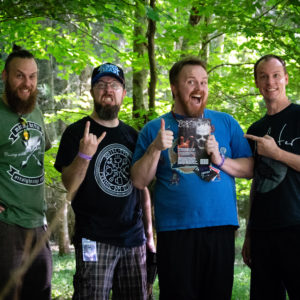 Away from the blazing sun of Amplifried Matt, Josh, Rob, and Alex of Psychostick bared all to Devolution. Well, not all,...
Copyright 2017 Devolution Magazine. All Right Reserved.
Back to top