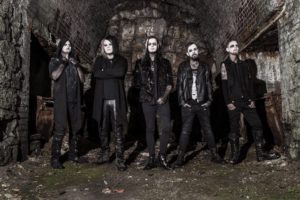 The Dead XIII are flying the flag for corpse paint and metal theatrics just when it’s needed.  With a few more senior bands looking to be heading to the crypt this is the perfect time to pick up the baton in the great musical zombie apocalypse.  Gary Trueman chatted to the band about their new album, fundraising and just who would be the last man standing in an undead world.

Your music has evolved somewhat between albums with Dark Days managing to be both heavy and rather sophisticated in terms of content. Is this a natural direction that will continue?

“To us it feels like the natural progression; we don’t write music to a brief, we just write what we love. As time passes and our musical influences change we try to bring new sounds into what we are doing, but ultimately each record is just a snapshot of how we are feeling at this point in our musical career. For us it’s all about writing songs that we really feel and we write something and we’re not getting into it then it’s back to the drawing board.”

How does the writing process work for the band. Do you have a main song writer or does everyone chip in?

“We feel it’s pretty key for us to all have a share in the writing and composition of our music, not just into our own respective instrument parts. The writing process for a song normally starts with one of us coming up with the general premise and basic structure, and then each member works on their part and expands upon it, tweaking the structure as we go.  Songs such as Dark Days, Angels and The Fallen, started life as rhythm guitar, bass and synth outline by Symon and Paul. This formed a platform for Ste and Spike to work their magic on, and really bring to life with the lead guitar and drums.  Other songs such as Insomnia, Last Stand, and Redemption began with Ste’s melodic lead parts or Spike’s Drum Patterns, which were then fleshed out with rhythm guitar, bass and synth. Once the main structure of the songs was formed Kurt could then write lyrics to fit the style and feel of it.  Between Catacombs and Dark Days, we’ve experienced a lot that has given us the inspiration. These experiences have made us more mature in our writing process and helped us to become the band we are today.

And what about lyrics? Traditionally the vocalist writes the lyrics. Is that the case with The Dead XIII?

“Kurt generally takes an idea or theme for a song and then has free reign to write what he feels. Lyrics are such a personal expression of the vocalist, so its important Kurt can put as much of his personality into them. This album was really a testament to that approach.”

Did you find the writing process for the new album easy and convivial or was there some degree of angst and compromise involved?

“It was definitely a very organic and natural writing process with us all bouncing ideas off each other. It had been two years since our last record and we have just built the ideas through that time. We pretty much had all the tracks ready before we even decided it was time to record it.”

What inspired the songs on Dark Days? The album has real continuity running through it.

“Musically this album is somewhat darker, it’s less movie screen monsters and more real life horrors. Lyric wise, Kurt chose a subject that affects him and a lot of people, a ‘silent killer’ so to speak. The reasons people can’t sleep at night, the reasons why people may not have the will to follow their dreams. Mental health is something that affects people in many ways, but an ongoing belief Kurt personally looks to is that we are not alone.”

You used a fundraiser campaign for Dark Days. How did you find the process? Do you think crowdfunding campaigns allow music to be made that otherwise might not be heard?

“Crowdfunding campaigns are a great platform to raise support for new music and to also get fans involved and to be a part of the process. For us fan involvement has always been a key part of what we do, allowing fans to get into the creative process and to make sure they were the first people to hear the record was so important to us. We’re so happy with how it has turned out for us and so thankful for the support we received.  Crowdfunding campaigns definitely give the artist much more creative freedom, so in that way they definitely allow us to release the record we want to realise with no restriction.  Something that without the campaign may not be viable.”

What bands do you listen too? What music inspires your writing?

“We have an extensive list of bands that we are in to, covering pretty much every genre! To try and refine it a little here are the bands that we listened to a lot during the album process and bands we feel inspired us: Rammstein, Static-X, In Flames, Motionless in White, Slipknot, Black Veil Brides, Of Mice & Men, Sonic Syndicate, Killswitch Engage and King 810.”

Do you try stuff out on family members or close friends? Are your families generally supportive of your music?

“We are really lucky to have family, partners, and friends that are very supportive of what we do. In terms of trying stuff out, as a band we are very critical, so usually it’s more a case of testing it out internally and making sure everyone is happy with it. Then trying it out live.  Being touring musicians can often be tough, it means time away from home, friends, and family, but it means so much to us that we are blessed with their support.”

You’re touring soon. So what will you miss most when you’re away from home?

“Being away on tour effects everyone in different ways. We love it, but there are always things we miss. The main things tend to be loved ones, home cooked meals, your own bed, and privacy! Being on the road you tend to give up a lot of things you take for granted every day at home, it’s definitely worth it though.”

And what are you most looking forward to?

“Getting out on the road, meeting people and performing music that we love. We’re looking forward to playing the news songs live and seeing everyone’s reactions first hand. Obviously, we can’t wait to catch up with the guys in Doyle and Killus too.”

If you could choose a dream tour partner who would it be and why?

“Picking one would be too hard, so how about our dream tour lineup?  We would love to play a tour with Rammstein, Slipknot and Motionless in White on the bill. We feel that would be an incredible line-up just to watch, never mind being a part of. They are three of the bands who’smusic and stage show really speak to us as a band. We feel we could learn so much from touring with them.”

If the tour bus broke down within sight of a creepy abandoned house would you stay with the vehicle or investigate?

“We’ve had a few breakdowns before, it’s all part of tour life. The second that van breaks down things get very boring very quickly, so yeah, we’d be straight into that house, no doubt about it.”

If the Zombie apocalypse happened tomorrow which band member would survive the longest and why?

“We think we’d all be quite prepared… borderline wishing for it! We have enough experience of zombie survival games that we have a fair idea what to do and what not to do. Hopefully we would be fine for a while, its more about how much fun you have tearing down hoards of Zombie’s than surviving till the bitter end.  Overall we recon Kurt would probably be the last man standing, he could hide in plain sight and blend in for as long as needed!”

You each get to choose one song to go out with at the end of days. What are your choices and why?

Kurt- “Motionless in White – Sinematic – I chose this song because I feel this song would fit perfectly for a horror / zombie movie soundtrack from a band that has constantly influenced me vocally. I also love the level of emotion you can hear in the song. Overall, I feel it’d be an amazing last song to hear.”

Ste- “Slipknot – Surfacing- This song  sounds like the end of the world! I can’t think of a better soundtrack for the end.”

Symon – “Rammstein – Feuer Frei – Going out in a blaze of glory.”

Paul – “Sonic Syndicate – Catching Fire. It’s one of my go to songs to cheer me up when I’m feeling down. It’s got a catchy, bounce and every time I hear it i can’t help but sing along.” 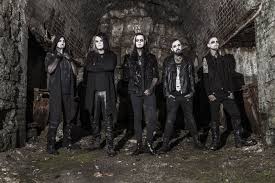 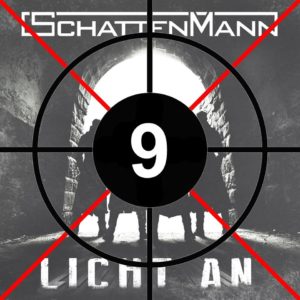 Schattenmann Licht An – Self Released This young band from Nuremberg, Germany Shattenmann very much stay true...
Copyright 2017 Devolution Magazine. All Right Reserved.
Back to top