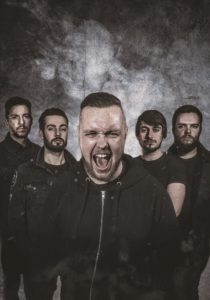 BAND NAME: The Face Of Ruin

CURRENT ALBUM RELEASE: The Face Of Ruin – Self Titled EP

“The Face Of Ruin is melodic death metal band from little old Warwick made up of 5 very handsome and intelligent young men. We’re all about catchy riffs and having fun. “

“We released our self titled EP in November last year containing 3 tracks which we think perfectly sums up our current sound. The menu is as follows:

Main – Beyond Life: A wholesome and filling crowd pleaser with groove and character.

Dessert – Return To Her: Decadent and indulgent; sexy horror with Gothenburg riffs and brutal breakdown. All of our influences in one course.”

“We flatter ourselves by thinking) A more accessible Black Dahlia Murder .”

“Unsurprisingly, The Black Dahlia Murder are a HUGE influence! The band started as a melodic death metal/metalcore hybrid with bands like In Flames, At The Gates and Killswitch Engage providing a lot of the inspiration. In reality, our sound is born out of celebration for a number of bands but Swedish Melodic Death would still be at the heart.”

Rich Pew (Guitars) – Lead guitarist. Writes the riffs and makes sure his hair looks great while doing it.

Matty Holder (Guitars) – He’s an airline pilot, what more can we say??

Chris Smith (Bass) – A beautiful bearded beast of a boy who beats that bass like a boss.

Matt Haycock (Drums) – Goblin Boy, so called because of the horrific gurn he’s able to pull. Pretty damn good at drums though.”

“It’s rare that anybody will put something on and one of us not enjoy it. At the end of the day we all just love music, it’s the one thing we can all talk about for hours on end and are tastes are very similar. So whether it’s Matt playing Infant Annihilator or Alex playing Wham! chances are we’re gonna have a good time on the road.”

If you were marooned on a desert island which band member would be eaten first and why?

“We’d probably say Alex because he has the most meat on him. Those indigenous creatures just couldn’t resist. They’d be set for weeks.”

“Our bass player Chris has made a name for himself by falling into or off things. He fell off the front of the stage at the very end of one of our sets in Leamington Spa once, right onto his back. But he kept on playing til the end! That was a funny moment.”

“We’d choose pretty much any of our influences. Black Dahlia Murder, At the Gates, In Flames and Dark Tranquillity. They shaped us into the band we are today so it goes without saying we’d want to support these Melodeath giants!”

“Each of us would choose something different here. Haycock and Rich would probably play Call of Duty whilst Alex, Smith and Matty would smash the mini bar!”

“The deal would have to be completely life changing for us to even think about it!”

“None of us really have bad habits… Alex eats a lot! But that’s about it.”

“So the majority of us hail from Warwick, a historic little town in the Midlands. To our knowledge, there is no music scene here…. But we fit pretty well into the Birmingham scene which, understandably, is a great place for rock and metal. Most of our shows are played in Birmingham and we won Bloodstock’s Metal to the Masses competition in Birmingham in 2016. The city has a bunch of awesome venues and metal is most definitely alive here!”

“Rich, one of our guitarists, will write the guitar parts and main structure of each song. Once recorded, that’ll be sent round the rest of the band for each member to write their respective parts. The songs are born from an individual but the finished product is very much a collaborative effort.”

“We honestly haven’t thought that far ahead! What we do know is that we’d like out first album to be a true embodiment of The Face of Ruin at that moment in time. A collection of tracks that really show off what we’ve learned and become during our time together.”

“We’re all massive progressive rock and metal fans so it would be blasphemy for us to shun the concept album. We completely believe there’s a place for them, especially with the resurgence and popularity of vinyl records. What better way to enjoy Mastodon’s Crack The Skye than to sit down with it on vinyl and listen to it uninterrupted with a glass of red wine and a bean bag chair? Do people still do bean bag chairs…?”

“You know, without shooting ourselves in the foot here, we’ve never collectively pushed to go full time. We all have our own lives and interests outside of music which are really important to us. I think the small successes that we enjoy feel special because we really don’t have any expectations from the music. We’re very lucky because everybody in the band agrees on that.”

“Incredibly important. It’s not a cliché, without it we just wouldn’t have been able to play our music. The Birmingham rock and metal scene has been kind to us and we’ve been able to play a lot of shows in the city. Not only is our local scene the perfect way to connect with our audience, it’s a great way of networking and making new friends in the community.”

What are the band goals for 2018? Anything important or any milestones to be reached?

“Our main goal is to write and record new material, we’d like to have an album’s worth of music to record this year.”

“So we’ve already played the New Blood Stage at Bloodstock after winning the Birmingham region’s Metal to the Masses competition. But honestly, we’d love to play that festival again, on a bigger stage! Bloodstock will always be important to us after that competition but that aside, it’s just a really well organised festival with awesome bands and a lovely atmosphere.”

“There are tonnes of great endorsers out there, so many to choose from. We are currently endorsed by Vocalzone. The guitar lads both use Ibanez, it would be cool to be endorsed by those guys.”

“I think we can all agree that Phillip Schofield has already earned his place in Heaven for being an all-round top lad. He’d receive angel status immediately upon death (we can’t remove him from this world just yet). Donald Trump would go to hell for reasons I’m sure don’t need explaining.”

“Fans of music…any music. Get down to as many local shows as you can. Music venues are closing all over the country. Not only do the bands need your support, but so do the venues. Also, you might end up loving a local band. Show your support! Believe me it’s needed!”

The Face Of Ruin 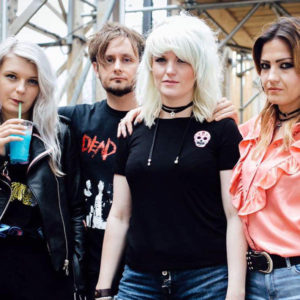 Salvation Jayne are a female led alt rock band that are gaining real momentum with their blend of rock, new wave and blues. ...
Copyright 2017 Devolution Magazine. All Right Reserved.
Back to top