You can’t have music without musicians but neither can so many of those musicians get heard properly without people like Mark Sesin owner of Headcheck Records.  Mark is a bit of a legend in the punk world for giving support to emerging acts, many of which have gone on to achieve notable success.  Gary Trueman spoke to Mark about giving bands a helping hand, the punk community as a family and his forthcoming wedding to Lynn. 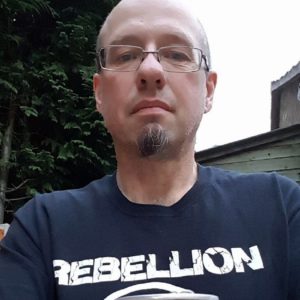 What prompted you to start Headcheck Records?

“I’d heard this many great bands I figured if they wanted help I’d give it to them, especially early on in their careers.  It’s giving them a step up.  Since then Maid Of Ace have moved on to bigegr and better things.  Brains Al, Gone got signed to Sony.  That’s what we’re about, trying to find small new bands that are trying to break through and give them a helping hand.”

So you’re finding new bands and giving them a home, so where do you find the bands in the first place?  Do they come to you or do you see them at events?

“A bit of both really because what I’ve done in the past with various bands is that they talk to friends they have in bands and then they get in touch with me.  Sometimes I’ll see a band at a festival and I’ll approach them.  That happened with Pussycat Kill, I saw them on the introducing stage here and approached them and worked with them for a year until they spilt up.”

Who have you got from your roster at Rebellion 2017?

“This year we have the Psychords, Turbulent Hearts, The Last Gang, Headstone Horrors and Brains All Gone.  I also book for Screech Bats but they’re not signed to Headcheck directly. “

So predominantly acts with a female vocalist or all female acts.  That’s a big thing that you see at Rebellion, the festival is very supportive of women musicians.  Is that a conscious decision you’ve taken at Headcheck?

“Initially I’d say yes because I was managing The Smears and they were the first band signed to Headcheck.  Really now though for me it makes no difference if a band has a male singer or a female singer if the music is good.  You’re right though Rebellion is an amazing festival for supporting women.”

Do you think right now the punk scene is putting other genres to shame in the way it is supporting women in music?

“If I’m totally honest I’d say yes although there are some great metal bands with female singers.  Overall though I think the punk community is more welcoming and take them more seriously as well.”

Do you think the punk community is more welcoming when it comes to other groups too such as those from the LGBT community?

“I do yes.  That’s one of the things I like about punk is that it welcomes everyone and there’s no prejudice.  It’s great for that.”

So you’ve got the record company and do you manage too at the moment?

Record label and management overlap a lot to I would imagine?

“Yes they do.  In the early days when I had The Smears and Maid Of Ace it works hand in hand especially when you’re booking gigs.  I ended up where I thought the best thing was to just concentrate on the label but also book for the bands that are signed to the label.  I have kept the Screech Bats on (for booking) though even though they’re not signed because I love them so much.”

Obviously you’re going to check out your own bands at Rebellion but are there any other bands that have caught your eye?

“Bratakus for sure, I love those two girls.  The Svetlanas , they just get better every time I see them.  Some bigger bands too.  I want to see Pennywise as I’ve never seen them, and Bad Religion too.”

Mentioning bigger bands, it’s very noticeable here that many big names are out mixing with the fans for long periods of time and the fans respect that and are only occasionally seen asking for selfies or the odd autograph.  They’re very respectful to the band members.  Do you think that’s pretty unusual these days?

“I think it’s just in the spirit of the festival where everyone is happy to just mix in.  It’s like one big happy family.”

You put on mini festivals and one dayers yourself.  What have you got coming up in the future?

“I’ve got Thinking Pink which I do with Jennie who co-runs Rebellion.  We do a charity event every year for breast cancer survivors, for the aftercare.  My partner suffered from it and luckily she was OK after an operation.  That’s on October 7th.  It’s at the Hairy Dog in Derby and will have 20 bands over two stages.  It’s a celebration for survivors and it raises some much needed money for Derby hospital for the aftercare.”

And finally, you’re getting hitched.  Whose idea was it?

“Haha, well we’ve lived together for 23 years and Lynn said I want to get married and I was like do you really? I wanted to do it and so it’s going to happen.”

“Lynn is more of a metalhead and I’m more of a punk so the wedding will be a bit of a cross between the two.”

From everyone at Devolution magazine congratulations.

“Thank you, it means a lot to me that the magazine covers smaller labels.  We need people to get behind us so for Devolution to do that is wonderful.”

Mark and Lynn have since married and Devolution magazine wishes them every happiness for the future. 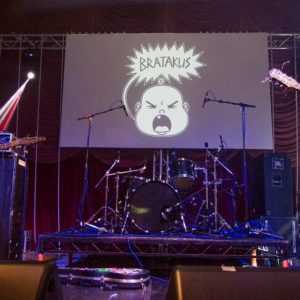 Bratakus are two rather endearing sisters who live in the back of beyond in Scotland.  Their ferocious punk sound complete...
Copyright 2017 Devolution Magazine. All Right Reserved.
Back to top