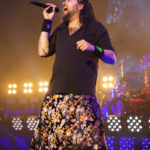 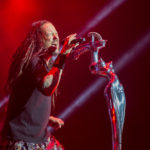 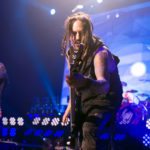 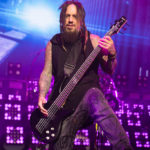 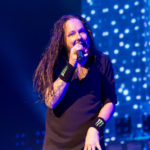 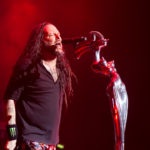 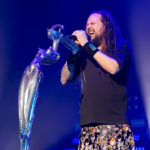 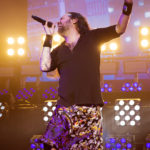 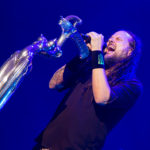 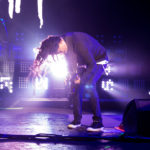 Leeds and Reading Festival has always had an eclectic line up, and this year is not different. With a strong metal presence in the shape of Bakersfield California’s Korn. Tonight sees them warm up for the weekend with a completely sold out one off performance at Brixtons legendary Academy venue.

Support this evening comes from Milton Keynes based Djent/Rap Metal hard hitters Hacktivist. Stage times are held back 15 minutes to allow the large queue outside to filter in and by the time the band take the stage the venue is half full and geared up for a heavy night.

The 5 piece come out the gates strong and hard with an energy level to match the ferocity of their playing. Dual vocalists Jermaine “J” Hurley and Jot Maxi trade rapping and growls with equal measure with bassist Josh Gurner and guitarist Tim “Timfy James” Beazley throw themselves across the stage as they spit out fast riffs and grinding bass lines. By the end of their half hour set, the sporadic pockets of fans have been joined by a larger contingent that Hacktivist have won themselves here tonight. Whilst they are not my thing, their energy is infectious and cannot be ignored (3/5) 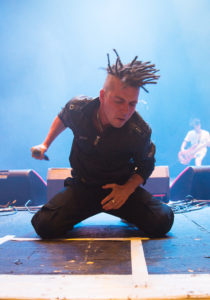 A large black sheet drops from the ceiling as the last of Hacktivists gear is cleared from the stage masking what creation is unfolding behind, hidden from view. Guitars and drums are line checked and tuned, each met with an enthusiastic if not ironic cheer from the crowd which has swollen to capacity as the stragglers and those that chose to stay in the pub drift in. However, the cheer that goes up as Jonathon Davis‘ now iconic mic stand is securely bolted to the stage is anything but ironic (even if it too is draped in black cloth!)

The roar that goes up when the house lights fall for tonight’s headliners is ear splitting. A roadie runs on and peels the cloth from the mic stand as the screen drops to reveal an impressive stage set up with drummer Ray Luzier’s kit set up at the top of a set of steps the width of the stage. Each step having its own light which, through out the night, puts on a spectacular show and spells out the lyrics to various songs such as the anthemic Clown. 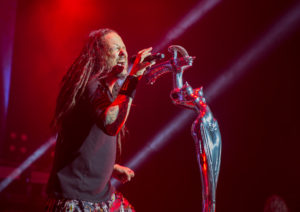 As the cloth hits the floor, the band rip into newer track Rotting in the Vain quickly following that up with classics Falling Away From Me and Here To Stay. This set the tone for the rest of the evening with the band dipping in and out of their back catalogue at will.

For me, something about this current Korn line up just “feels right”. Head and Munky flank the stage body slamming and head banging like they did in 1994, whilst Fieldy prowls the stage slapping out rhythms on his bass like it owes him money. At the back Ray Luzier holds it all together behind the kit with his tight and on point style whilst up front Jonathon Davis has the crowd in the palm of his hand. Despite there being little to no interaction with the crowd tonight, he is clearly having a great night and the smile never leaves his face as he scats his way through Twist (sending the assembled masses into raptures) or leads the crowd in a verse of We Will Rock You midway through a crushing rendition of Coming Undone. Of course the bagpipes make a welcome appearance during the darkly twisted Shoots and Ladders. There is something genuinely creepy and fun about a dark room full of people singing nursery rhymes. Old school favorites like Got The Life and Make Me Bad got the crowd bouncing and moshing like they did nearly 20 years ago. 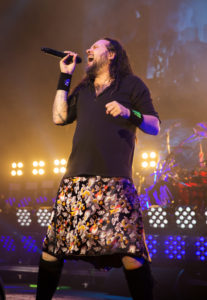 During a rare moment of conversation, Jonathon Davis encouraged us all to vent our spleens and scream “Fuck That” before the band tore in to “Y’all want a single” (it has to be said, it’s amazing how much better you do feel after screaming that sometimes).

The band retires to the wings for a breather, and the audience welcomes that as well – the temperature in the building was off the charts. They return to the stage for a 4 song encore that leaves everyone gasping for breath and begging for more. First up we’re eased into things with a chilling 4 U, before things get serious as the intro for Blind begins. As the song kicks in, the mosh pit violently opens and crowd surfers fly though the air. Before a 1-2 combo of It’s On and Freak on a Leash bring the night to a triumphant close. 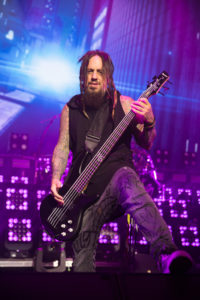 Tonight Korn have shown just why they are as popular with fans now as they were during the peak of “nu-metal”. They have delivered a set that has wowed and delighted everybody in attendance and if they can (undoubtedly) pull that off again at the festivals over the weekend their trip to the UK will be one for them to remember for a long time to come. (4.5/5) 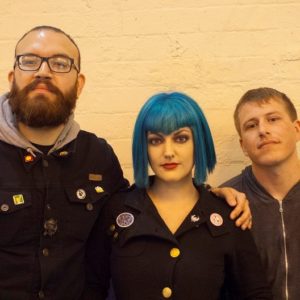 When Brenna Red exited Fiction Reform you just knew it wouldn’t take long before she resurfaced with something new.  That...
Copyright 2017 Devolution Magazine. All Right Reserved.
Back to top