When Brenna Red exited Fiction Reform you just knew it wouldn’t take long before she resurfaced with something new.  That new thing is feisty three piece The Last Gang  who played their hearts out at Rebellion this year and made a whole lot of new fans in the process.  Gary Trueman spoke to Brenna and the rest of the band about playing Rebellion, what they were expecting and whether cider is best over here or over yonder.

“So far I can say this is the best show we’ve played as a band. Everybody has been so nice and so supportive and we’re having a great time.  The UK has definitely spoiled us.  When we go back home the shows are going to feel like, nuh, I guess.  We love it here in the UK.  If we get invited back we’re for sure going to come back and hit one of the bigger stages hopefully.  Next year we’ll have our new album out so we’ll be pushing that.”

Have you played some other shows while you’ve been over here.

“We’ve done six or seven so far.  We’ve been playing a tour we’ve called the road to Rebellion with our family and friends the Turbulent Hearts.  They’re on Headcheck Records with Mark (Sesin) so they’ve been long time friends with us.  When we found out we were both going to be doing Rebellion we decided to team up and do a DIY tour.  Mark has helped us do shows, I’ve done my own booking and Suzi ( Carmichael) has done her own booking.  It’s been non stop awesome shows.  Here at Rebellion though, the unity in this place is unreal.  It’s an overwhelming sense of a scene and of unity.  There’s ten thousand people here and not one scuffle.” 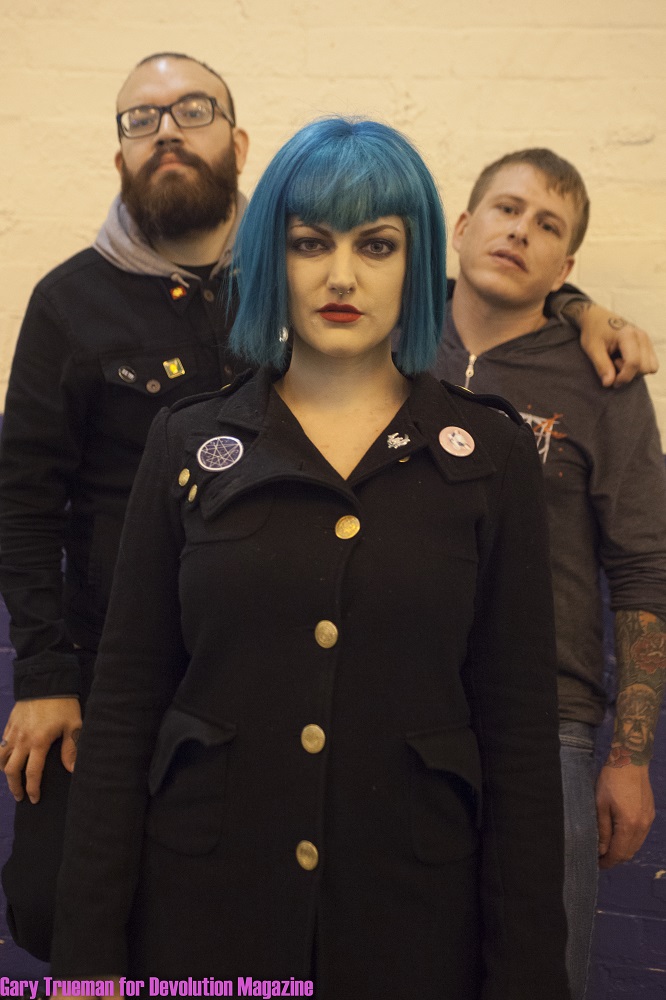 Obviously the UK and the US have differences in the language but is there anything band specific that is different?

“I think being a musician most things are universal, all the phrases are the same.  In a touring band everybody knows load in and check in, set times and sound check.  In the US you do get asshole bands that are difficult but here everyone is so hospitable.  We’re very grateful for that.  We didn’t know where to go for our interview with Rebellion radio and some guy was just like so helpful and said for us to just follow him.  He was so nice.  We love this family, we love this scene.  You guys ought to realise how lucky you are to have this immense scene.”

You got a great crowd when you played.  What were you expecting?

“Four people haha.  What we thought might happen was what happened to the Screech Bats last year.  We fucking love the Screech Bats.  They said there was a few to start with then people started to pile in.  Often what happens to us in the states if we play a new venue someone sees a girl showing up and they think it’s going to be a little too prissy or not aggressive enough.  As soon as we start playing and feel the energy then they start to trickle in.  Here there were people right from song one and that’s just fucking rad.  It’s such a good feeling and I’m really happy everyone was there.”

Are you here for the whole weekend?

“We are.  Or family the Turbulent Hearts are playing later.  I’m happy that we are one of the first bands so we can get it out of the way and play and now we can just hang out and drink pints and yell and lose our voices and not have to worry about it.  We’re going to get mental as they say here.  It’s time for some beers.”

Are you going to go to Tache later?  It’s where a lot of people go once the festival starts to wind down.  It has bands and is a great meeting place where you can party.

“You will see us there then.” 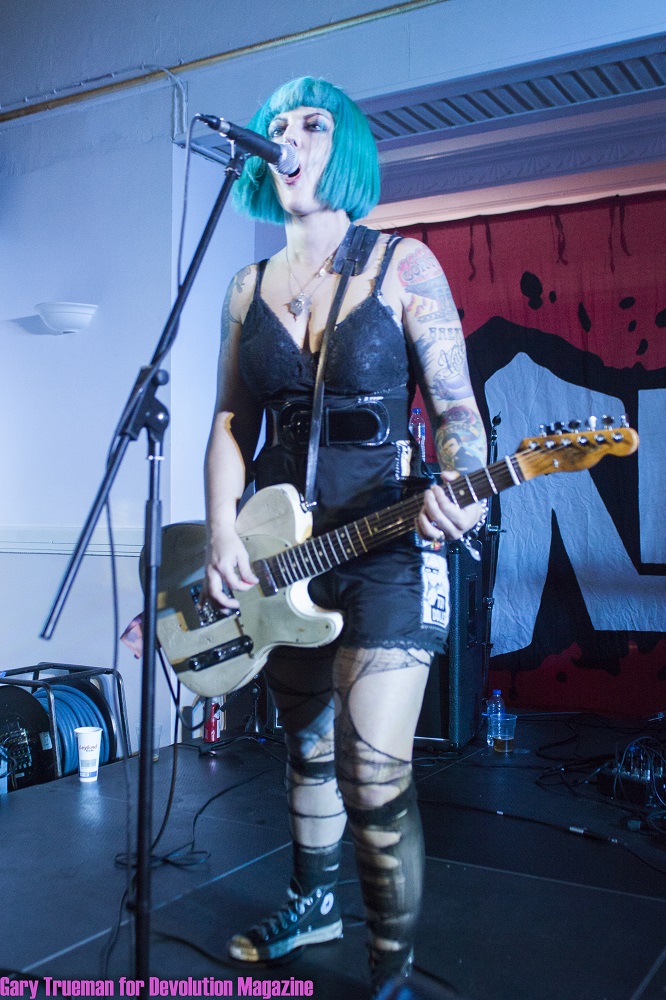 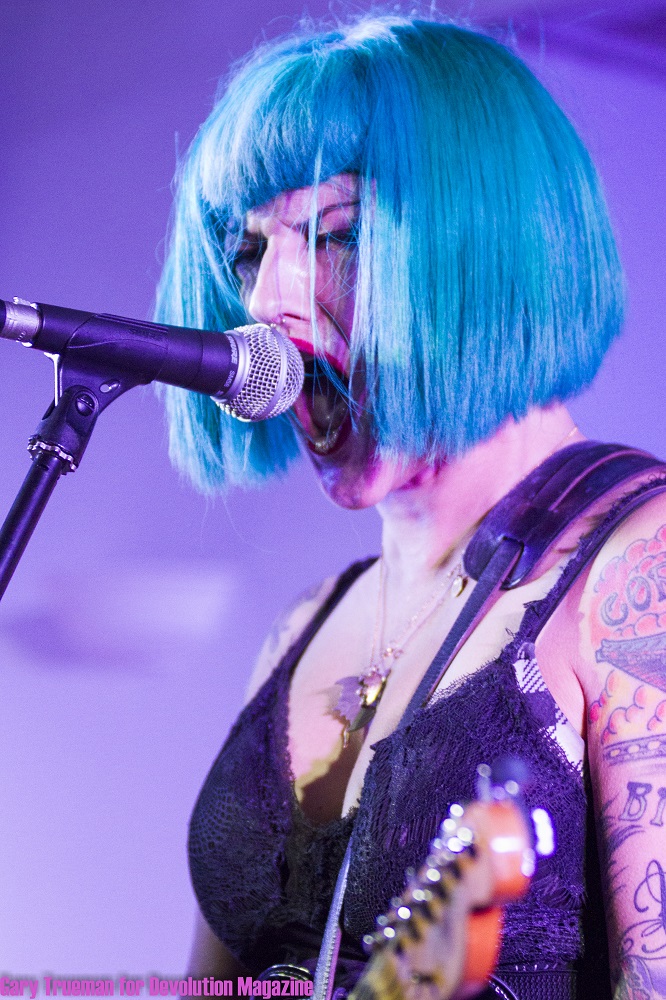 Where do you see the band going.  How far do you want to take things?

“We have visions of world domination.  We want to take this everywhere.  We went on tour with the Cro-Mags, that was so amazing.  We’re going to get our new record out soon.  We don’t see it stopping, we really don’t.  We’re going to take what we sing about, about friendship and unity and art and inspiration and trying to make your community a better place and we want to take that message everywhere we go.  All we want to do is play music.  Rebellion has been a big encouragement.  We’ll be back here next year with a new album.”

And more about the new album.

“It’s not going to be DIY.  It’ll have push behind it but we can’t say who that is just yet.  I is going to happen but there’s no time line just yet.  You will be seeing a lot more from us we promise.”

“We’d have to go with the UK on that one.  Bulmers is delicious.  Bulmers Fruit is the best cider and The Last Gang fully supports Bulmers.  Sponsor us Bulmers…. Haha.” 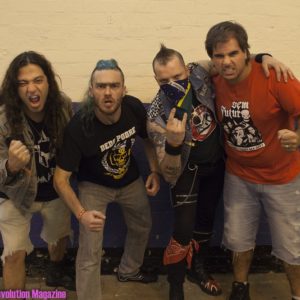 When you work all year round just to save up enough money for a week away most people would want to go somewhere exotic. ...
Copyright 2017 Devolution Magazine. All Right Reserved.
Back to top