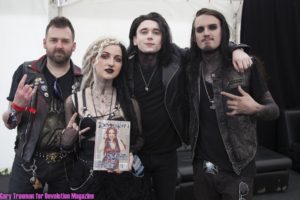 The first band on the Dogtooth stage She Must Burn played to a packed tent showing just how good the music on the fourth stage was going to be this year. Mark Bestford caught up with James, Frank, and Annina after the show.

Frank : “Yeah exactly, Dani filth’s a really cool guy, a mysterious guy, like when you do see him you do get to interact with him, he’s a cool dude, we get along with him really, really well.”

You guys have also toured with his other band, Cradle Of Filth, were there any big noticeable differences between the two tours?

Frank: “Hmmm, that’s a good question, yeah I’d say so. I mean Cradle Of Filth have been around a lot longer, their shows and stuff are a lot bigger and the way things work, I really didn’t see Dani really on the Cradle Of Filth tour because of the amount of like, you’d see him in the morning getting a coffee or something and then he’d disappear for hours and when you saw him next he’d be like a knight of the abyss, like covered in spikes and his makeup would be done and he’d have his cloak going and everything, really spending a lot of time looking the part. They all do actually.”

James: “The theatrics on the Cradle tour were pretty good.”

Frank: “Yeah, yeah, they’d spend so long setting up, putting everything, like they had one of these huge crosses, with like crucified skeletons on the cross and they’d just like pulled up and hang from the ceiling and the pyrotechnics and everything. And also tour manager Mike Lamb runs a tight ship as well.”

James: “Yeah you didn’t have to worry about anything going wrong.”

Frank: “Yeah exactly, you had to do as you’re told as well.”

Dani’s home videos are famous for his practical jokes, were there any funny moments when touring with them?

James: “When he did Devilment.”

Frank: “They come out to I wish it could be Christmas or something wasn’t it?”

James: “Oh, it was a George Michael song, what was it? Was it All I Want For Christmas? No Last Christmas, he came out to Last Christmas and blasted us with a bunch of confetti.”

Annina: “It had glitter bombs.”

Frank: “The whole band came out through it, we had glitter on us, tinsel. Tinsel landed on the backing track, it switched the track and like another song’s playing in the background.”

Annina: “I found glitter on my keyboard for like two weeks after that show

Frank: “It stuck to the black paint and wouldn’t come out.”

James: “A rogue bit of tinsel fell on the backing track pad and knocked it all out and it actually decimated the set.”

Frank: “This is between songs as well when they actually came on while we were playing.”

James: “Yeah so it was brilliant.”

You’ve just opened on the dog tooth stage, how amazing is it playing at Download?

Annina: “Also, the level of professionalism, like everything’s so organised and everything happens really quickly.”

Frank: “Yeah we just go out there and first it was like there’s nothing going on , there was no one out front, there’s like ten minutes to go so we go back and get our final things ready and whatever equipment we need and then we walked out onto the main stage and the tent was just completely packed and everyone just like “ bloody hell”

Frank: “…And that’s when it just kinda hit me like.”

Frank:  “Yeah, yeah, it went as well as it could have gone.”

James: “Yeah, the energy was just huge, just being there.”

The album came out this year, obviously there have been changes since it was recorded, did that make it a difficult album in production?

James: “Oh no, it was for the best, I mean the changes we implemented before we had our reason for making happen and it’s all come together as a new unit and the creativity is just fantastic, like it just flowed, the whole thing flowed.” 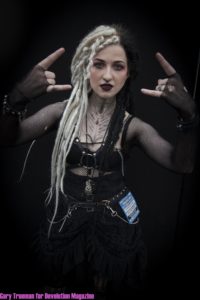 To Annina – Are you now a permanent member of She Must Burn?

Frank:  “Oh yeah, I know. We need to do a lot of things, we’ve just been so busy with everything else so we want to make sure when things are announced in certain ways it’s done properly instead of like a ten second filler, we’ve got a lot of things on the go at the moment that we need to like announce and all that kind of stuff and we want to do it properly.”

So with the new vocals is that going to take any future work in a slightly different direction or more the same?

James: “Well we’ve always wanted to have that like elegant kind of like female vocal with the aggressive music, I’ve always been about melody, big choruses and that’s always going to be a part of what we do, or for the most part, but if you’re talking like 15 years in the future anything’s possible.”

So you’ve finished, are you staying for the rest of the weekend?

Frank: “We’re staying, the friends with us are staying for the rest of the day, going to see System Of A Down, there’s a few other bands I want to see and then I’ll head back because like I live right down south and there’s stuff I need to be back home to take care of. It’s unfortunate for me as I want to stay but duty calls.”

So, Dogtooth stage this year, anything big lined up for the next 12 months or so?

James: “We can’t talk about it yet, but in a couple of months.”

Frank: “We’ll be announcing, we’ve got a few things up our sleeve, we’ve got some big announcements this year. We’ve got some things beginning of next year that we’re just waiting to see if they’re going to happen, yeah, we’re just finalising a few of the finer details in the next couple of month so stay tuned on our Facebook page, we’ll definitely be announcing some really cool stuff.”

Do you think you’ll be back at Download again soon?

James: “Yeah, we certainly hope so, climb our way up and see where we are next year.”

Frank:  “Yeah, yeah, that’s what we hope for, just come back and another one we want to play, they don’t do Sonisphere anymore.”

James: “Yeah that’s a shame that was a good festival.”

Frank:  “Yeah I love that festival, but yeah, like Bloodstock as well and we hope to do some festivals in the US, like Warped Tour.” 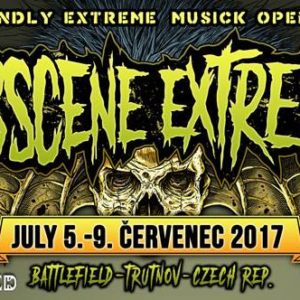 We are really looking forward to flying out to Trutnov next week to attend our first Obscene...
Copyright 2017 Devolution Magazine. All Right Reserved.
Back to top