My Hometown: Professor Elemental: “In Brighton there’s a greater chance that you’ll end up somewhere weird with someone unexpected doing something you hadn’t imagined and really enjoying it.” 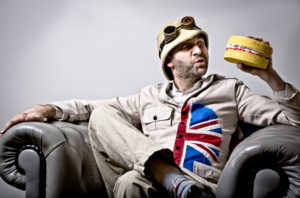 Brighton is as famous for its free spirited nature as it is for the pier (it used to have two) and its jaunty sea side demeanour. Always notable for its independent mind set the south coast jewel has the UK’s only Green party MP (Caroline Lucas – Brighton Pavilion) and was a resort early to designate a beach for nude sunbathing.  Who better than to give us his own take on Brighton life than long term resident Paul Alborough whose alter ego Professor Elemental has become a firm favourite in the Steampunk community and indeed within the alternative crowd in general.

We know people can get blasé about living in a town or city with iconic features. What are the things other people might know Brighton to be famous for that you think locals are actually really proud of?

“I think that even though Brightonians can be a bit of a rubbish audience because they’re spoiled they are proud of their fringe festivals and small venues. All the little things and the ability to put on shows that don’t always work which is probably why the Professor thrived there.  Yes, the Brighton fringe and all the quirky performances that go on.”

Do you have a favourite place to hang out with friends and have a beer?

“If I’m in town maybe the Bees Mouth or the Marlborough Theatre which is like my spiritual home where the Professor started. I I’m nearer home then the Stanley Arms which is like the most real ale dad pub there’s ever been.  It’s just dad’s of different ages in cardigans quietly sipping their ale.  It’s beautiful.”

What about food, does Brighton have a particular place you love to eat at. What is their speciality.

“No where posh really! The Marwood café, it doesn’t even serve that much food but I really like it.  It epitomises everything about Brighton in that it’s quite funky and quirky and a little bit hipsterish.  It’s nearly pretentious but steers just the right side of the line and is full of lovely people.”

Do you have a venue you love going to to catch bands (or play at). Are there any venues off the beaten track tucked away that put great music on?

“When I first came to Brighton there didn’t seem to be those places. There’s a few now.  The best for that kind of thing is the Green Door Store.  It’s an old railway goods place and it’s not been done up properly and it’s the kind of place to have a really good party.”

What’s the thing you love most about Brighton?

“I want to say something like the people but the real truth is the pier because it’s got the Crazy Mouse on it. When I’m bored in my office doing my Professor admin sometimes at lunchtime I’ll sneak out on my own and go on the Crazy Mouse at the end of the pier.”

And the thing you dislike the most?

“It has to be how incredibly expensive it is. Thanks a lot London for pushing the posh people towards us or that they are often but not always a bit of a rubbish audience.  They’re always looking at their phones or chatting when they should be looking at me.”

Do you have a special place that you like to go to? Maybe somewhere not that well known but special to you.

“It’s my office. I hire out this little corner of an office and because I’ve got a young family and stuff at home it’s like my dad shed.  It’d filled to the brim with muppet toys and comics, just everything I can hide in for the day.”

“Haha, I’ve got a lot I definitely don’t want to share.   Yea actually I recently asked my other half to marry me and I did it by virtue of an enormous treasure hunt through Brighton to all the places that we ever had dates.  We ended up in the Pavilion which is a beautiful spot.  That was a pretty special day.”

Sell Brighton to Devolution readers. Why should they visit if they get a chance?

“There is nowhere else quite like it for a party. There are other towns that party harder but in Brighton there’s a greater chance that you’ll end up somewhere weird with someone unexpected doing something you hadn’t imagined and really enjoying it.”

Live: Junior & As The Sun Sleeps - The Meze Lounge, Newport

News: Wednesday 13 is making a return to the UK this October 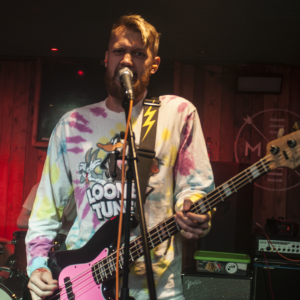 Live: Junior & As The Sun Sleeps - The Meze Lounge, Newport

Junior & As The Sun Sleeps - The Meze Lounge, Newport With 2017 quickly becoming the year that is ushering in a renewed...
Copyright 2017 Devolution Magazine. All Right Reserved.
Back to top