Devilment: “I think people before wouldn’t be involved with the band cause they thought ‘this is a one-trick pony’, but this is a real band!” It has been five years since Devilment formed and since then they’ve gone from side-project to a near whirlwind. With their second album, ‘The Mephitso Waltzes’, which followed hot on the heels of their 2014 debut, Devilment are continuing to cement their position as one of the most formidable underground British acts. It was a pleasure to speak to vocalist Dani Filth and keyboardist/singer Lauren Francis about everything that the Suffolk crew have put into their sophomore labour of love.

So ‘The Mephitso Waltzes’, what is there to be excited about?

Lauren: There are lots of developments with the music. It still holds true to Devilment, but it’s more mature in some ways. There’s lot of new stuff going on, more singing, more synths.

Dani: Yeah, it never seemed like a band before, it seemed like a project, but when you release album two it solidifies the fact that its real and it’s not just dying out after one album, so that’s a step up. We’ve proved to people it’s a force independent of my day job or anybody else’s in the band that’s got other commitments musically, but obviously people always blame me for stuff (laughs)! We made a conscious effort on this record to make sure everything is catchy and contained, and there are not loads of chaff in it or unnecessary parts.

D: Yeah, we really worked hard in the studio on those, to get the choruses right.

Are these all new songs or were there some left over from your first album?

D: No they were all totally new songs, we actually scrapped some as well; we wanted to make sure we didn’t spread ourselves too thinly. If you keep going on and have like, 15 songs, and 10 of them are shit (laughs)!

L: They had to be to a certain standard, and we weren’t gonna put anything out there that we didn’t think was at its best or as good as we could get it. There were re-writes even in the studio so lots of hard graft.

Being a band that live closer together, did you write the songs collaboratively in a room or individually?

D: A bit of everything. A lot of it came about actually in the studio, at least for me. I was actually on tour, they started and I came back, and so I was like, ‘Wow, this has changed, that has changed’- for the better obviously.

L: Everybody has a set up at home, and it is definitely good for ideas, and I think we’re lucky that we now live in a time where you can do that, even if it sounds like really rough, especially if I’m recording vocals in my bedroom, which sound terrible! But nothing really beats being in a room together, and jamming through ideas. I don’t think you can get any better than that.

Was there any kind of specific mindset you wanted to get into for this album?

D: I think it just came about naturally. We had a slight line-up change, we won’t go into that, but we parted ways with our drummer just before the album, but it wasn’t a case of compatibility, he just said, ‘Hi guys, it’s getting serious now, I’ve got my job, I’m moving house, I’ve got my daughter to think about’. It was just way too much, but I play football with him every Wednesday night, and I go out with him on the weekend. The song came out and he commented saying ‘Wow, good job guys’. And luckily, there is quite a tight knit group of people in our locality, and we were able to find Matt Alston, who plays for Eastern Front who are a black metal band, and he does a lot of drum teching, he drum techs for Ill Nino (laughs). You can imagine he’s perfect for us, cause he’s fucked up!

With the last album you had an escapist idea of a fairytale, is this carrying on with the second album or do you have something new?

D: It’s carrying on with that escapism. The artwork complements it fully and gives it that story book vibe. It certainly is full of black magic, infatuation, personal issues in songs that are dressed up to make it seem a bit grander out of the reach of normality. I would say compared to the first album, it’s like a more grown up version. It’s certainly more refined. The music’s more refined, the artwork is more refined.

Some of the songs though are faster, it’s heavier…

D: Yeah I’d say heavier, but, and we’ve said this before, we hate saying it, with pop sensibility. There was a lot more experimentation. Lauren was a lot more involved on keyboards.

L: Yeah I bought in a lot more keyboard melodies, so it contrasts quite nicely. I think often people have picked up on the light and dark elements of Devilment, maybe more so on this album!

So writing the music is a fairly collaborative process, but when it comes to concept and lyrics, is this purely your domain, Dani, or did you work together here too?

D: Actually it was the first time I’ve ever, ever. Lauren wrote a load of stuff, and I actually wrote a song, ‘Full Dark, No Star’, around what she’d written as a guide, and it was quite full, no silly unicorns or anything like that going on…

D: (laughs)And I was thinking, ‘right, she’s got the pattern, and words, so I’m gonna have to re-write the words to fit the pattern’, so that was collaborative, something I’ve never done before.

L: And experimenting with changes rhythms or lyrics or melodies, different choruses. So sometimes I would say, ‘Why don’t we try this melody, or this rhythm, or re-write the chorus with Dani’s lyrics’. Often when I record a guide I’ll make up some lyrics and then say Dani can you do the lyrics and make them better!

D: Yeah totally, this is always difficult for Cradle, because of the enormity of the songs. Things are kind of set in stone before we get there, especially if it’s a concept record. It would be difficult to say, ‘oh, you know chapter three, can you just make that chapter eight?’

D: I think there’s just a different feel, a atmosphere. Cradle would be like Bryon or Shelley, and Devilment would be like Roald Dahl or Sylvia Plath. It’s more modern, a bit more surreal, a bit more up to date. With Cradle of Filth, that’s just the way it’s grown, people come to expect a certain style of writing.

Are you hoping now that fans and media are starting to see Devilment as its own entity?

D: We’ve started to see the results already. On YouTube, the reaction to the ‘Under the Thunder’ was 95% positive. I think people before wouldn’t be involved with the band cause they thought ‘this is a one-trick pony’, but this is a real band! How many albums you can make, how long can you go on for before people are like, ‘oohhh yeah, this is actually a band’ (laughs).

How do you feel about being known more for another band rather than Devilment?

So you’ve got a tour booked, are you looking forward to this?

D: Yeah. They’re not massive venues, 200, 400, 500 capacities. It’s gonna be good. We’ve got local bands, which we’ve handpicked, cause we had some suggested to us by various people, and most of them were just fucking awful. Not just awful, some were good, but people (our fans) would come and say, ‘What the fuck are these bands?’ So we did our own research, and we’ve got a couple more to fill out, local bands playing each night, and then we’ve got this band, She Must Burn, and they fit quite snugly into it I think.

Are you looking forward to playing smaller venues, because your last tour was with Lacuna Coil at bigger places?

D: Yeah I like it being more intimate. I don’t like it being overly fucking hot, which it will be! We’re looking forward to the tour in general- it will be a lot of fun. We’ve got, funnily enough, Cradle of Filth’s old keyboardist Lector as tour manager, so we’ve got the entire route in plan. This one’s gonna be very hands on, from actually sourcing bands ourselves, the venues, so it’s a labour of love.

So, Devolution is an independently printed small magazine, what is your opinion on small magazines and the printed press? Do you think there’s still a need for them?

D: Yeah I do! I always have this argument with people, but I started reading, just in the studio I saw this thing on Amazon that said, ‘We’re doing this month’s trail for this Kindle app’, so I thought ‘Ok I’ll try it out’, and I read a load of horror books you can’t get, I read them pretty quickly, and it just gave me a headache! I finished the month, but no I prefer books. I like books and it’s the same for magazines, the same for albums- I know I’m probably depleting the world’s resources with vinyl and CDs and paper, but as long as it’s sustainable it doesn’t really matter, does it. I think it gives things value- when you have a CD, you appreciate it way more than an MP3. The same goes for printed (magazines).

L: I like the way it’s carefully laid out when you’ve got a magazine, same with newspapers. I like opening it up and seeing the way it’s laid out- there’s a lot of creativity in there.

D: I mean you can get that with digital books, but it’s a different experience. When I was young, I had my own skateboard magazine, it only went out to about 100 people, they all bought it, and looking back it was awful (laughs).

I suppose in the early days of Cradle, fanzines were very important?

D: Well that was all there was- printed fanzines! I used to draw front covers for loads of magazines in exchange for, you know, ‘we’ll give you a good review’ (laughs). And I liked it because it got my name about.

Changing the subject a little, Dani, if you could play God for a day, what would be on your list of things to eradicate from the world?

D: I’d get rid of Donald Trump for a start, and there are a lot of things I’d get rid of that I wouldn’t actually come out in public and say, I’d cause too much trouble. Just annoying things, it probably, in the grand scheme of things, wouldn’t add up to a huge amount of good, but it would be good for me (laughs).

Review: On Trial UK - Look Directly Into The Sun 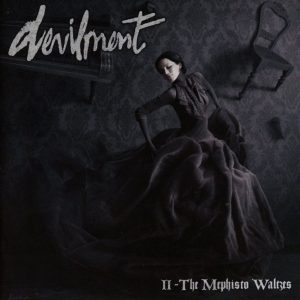