For me personally ’Lost Ritual’ was one of the most anticipated albums to be released this year – so I was quite invested in seeing if the hiatus had affected the band and their sound at all. What can I say? This is one of the most crushing and exciting records I have had the pleasure of reviewing and is one hell of a comeback! The dual vocals are absolutely relentless from opener ‘Bring Out Your Dead’ and immediately confirm (thank Christ!) that Raging Speedhorn are still one of Britain’s finest and well-oiled metal machines that we have ever had the privilege of calling our own. The guys have continued to grow and have raised the bar immensely with their vocal and musical game to such a high extent that in all honesty I can’t think of a single bad word to say about this offering. ‘Motorhead’ and ‘The Hangman’ are absolutely wonderfully doomtastic and full of that well known low level rumbling bass that will be absolute chest thumping punch for all within a fifty foot radius in a live setting. ‘Evil or Mental’ is an absolute beast of a song and my definite favourite on the album, dirty sludgy undertones, ruthless doom riffage and stomach wrenching guttural vocals make a delicious winning combination and show the sheer tightness and positive future direction of a band who are absolutely on fire right now! Great to have you back boys you were sorely missed! 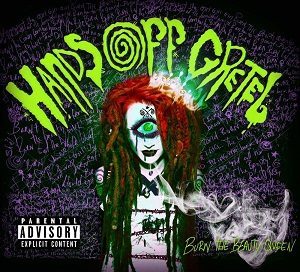 Hands Off Gretel - Burn The Beauty Queen (Self Released) I first heard of Hands Off Gretel hailing from Barnsley,...
Copyright 2017 Devolution Magazine. All Right Reserved.
Back to top