They played the Alt Collective last year and blew everyone watching very far away indeed. This year they have stormed the festival scene and have become one of the UK’s fastest rising bands. Topping the lot was a maxed out show at that hive of alternative culture The Black Swan in Spalding. Gary Trueman popped down to his local watering hole pre-gig for a very special chat with Hands Off Gretel’s charismatic front gal Lauren Tate and band manager Helen who also just happens to be Laurens mum. Up for discussion was school life, a new album and vegan tee shirts.

Growing up and looking back at those school years. Was it difficult, did you know you were a bit different early on and how did other school kids react to you?

Lauren: Well yeah I’ve always been quite different and quite difficult. I was a difficult child but I always convinced mum it wasn’t my fault. At school I couldn’t concentrate, that was one of the main things and no subjects interested me. I didn’t really get along with any of the other kids either, I didn’t really have any friends at school. The only friend I had at school was myself so I spent more or less every day entertaining myself. I just tried to be as naughty as I could. Everyone else was concentrating on the jobs they wanted and I felt like it would never happen so I just spent school life enjoying myself.

Helen, when did you realise that Lauren was different and special? You obviously supported her, was that an obvious choice to do that?

Helen: I think from an early age, at primary school, she’d come home and tell me all the tales about getting into trouble. I was always the one going in and defending her, trying to make them see that she thinks completely differently to other people. They just couldn’t get that, they just want kids to fit a mould and Lauren didn’t fit the mould.   I understand teachers have got a class full of thirty kids and they don’t want anybody who is different. I could always see she wasn’t playing up or trying to be disruptive, she just couldn’t see the point of sitting there learning things that she didn’t think mattered. She’s a very deep thinker and from an early age and had some quite dark thoughts early on. We were quite worried about her. Through secondary school she seemed to isolate herself even more, she’d ring me from the toilets crying and she’d come home and lock herself in her bedroom. What was so frustrating was that I know she’d got this talent and school would never support her because she shone just a little too brightly for them. As a parent I could see that she weren’t a bad kid she just needed somebody to recognise her talents and nobody ever did.

A lot of parents would have been going with the flow and with the school. Do you think you’re lucky to have Helen as your mum, someone who backed you up?

Lauren: I think I was very lucky having my mum because she understood me. A lot of young people don’t have that kind of a relationship with their mum or dad, they hide from it all of the time. They’ll tell their friends or they’ll have someone else to talk about their problems with but I was younger my mum was the first person I told anything to. Everything went straight to her and she understood me. Even when I was in trouble and other parents wouldn’t try and understand why, she would understand why I did certain stuff. I’m very lucky.

I think I was very lucky having my mum because she understood me. A lot of young people don’t have that kind of a relationship with their mum or dad, they hide from it all of the time. They’ll tell their friends or they’ll have someone else to talk about their problems with but I was younger my mum was the first person I told anything to. Everything went straight to her and she understood me. Even when I was in trouble and other parents wouldn’t try and understand why, she would understand why I did certain stuff. I’m very lucky.

Moving forward a bit. Helen you now manage the band and often you see parents managing their children and getting it hopelessly wrong and yet you are really successful at it. Have you got any previous managerial experience, because you do a great job?

Helen: Thank you. It’s really weird because I find it really hard when people say I am their manager even though I do all the things a manager does. I find it really difficult to say that to people because at the end of the day I am Lauren’s mum. She very nearly signed with a couple of managers and I went and supported her and sat with her. She kept saying they can’t do any different to what you’re doing and they don’t know any more than what you do. So we’ve just stuck at it. It’s only really the last few months where it’s got more serious with the band that I’ve helped them to put band agreements together and sort the finances out and thinking about an album launch. I’m learning as I go along at the minute, googling stuff and finding things out.

Is there a point where you would hand some of it over to someone else?

Helen: We’ve talked about it. I said I would never want to hold her back. I know this industry is all about contacts, but I’ve also found it’s a lot of smoke and mirrors as well. People will try and make out that they are bigger and better than what they actually are and I’m not good at that. We will know when it’s right and it’s the right opportunity. There’s been a lot of opportunities that have come Laurens way and I don’t even tell her because I don’t need to, she knows instantly. The emails come in and it’s like you haven’t got a prayer, she’s not going to entertain that. We’ve got that type of relationship where I know Lauren needs that fully creative freedom. She would not cope with anybody telling her what she could and couldn’t do. So it works quite well really.

Before Hands Off Gretel you put out a covers album and even now those songs are getting a huge amount of attention. A lot of people couldn’t believe how young you were singing that well. Was that a boost if you like that you’ve carried through with people still seeing those songs on YouTube and then checking out the band?

Lauren: Yeah. A lot of people say not to do covers and just push your original stuff but it was by doing those covers and finding who I was that I found out what kind of music I wanted to do. I think it was the best thing I did. Like the video for Whole Lotta Love, that’s gone viral. I saw it on Facebook and someone else had uploaded it and it had millions of views. People had commented asking who is this girl and a lot of people then come over and see Hands Off Gretel and they either like what I’m doing now or they say I should be doing classic rock. But, I can do both.

Do you two ever fight or argue or have differences of opinion at all?

Helen: I’ll take this one (laughing). We never ever fight about what she’s going to do, it’s never about that. In terms of photography and videos and stuff, I started out doing a lot of the videos and then Lauren got into it. It’s amazing how quickly she picks things up. Now she edits and produces all her own videos. That were hard because I’ll kind of stand behind her or I’m not allowed in the room. She’ll tell me to get out, you’re not allowed in. We’re actually very similar, we’ve got exactly the same personalities so we both know how we feel. When Lauren feels down I can sense it, there’s this link between us which is quite scary. I’ve only got to look at her, sometimes when I see her performing and I know there something wrong. We can both explode, Sean the guitarist is terrified when we both go at the same time. He says that we’re equally scary. We do that though, we’ll explode and then look at each other and burst out laughing. We’re just really good friends. It’s never longer than five minutes.

It’s nice that you’ve got that. Now what about veganism, you have your own range of shirts and stuff. Plug your wares.

Lauren: I design my own vegan tee shirts. It’s actually mine and my mum’s business. It was mum’s idea because we’ve both gone vegan and it was something late on in mums life and it’s something we’re quite passionate about, animal rights. She had the idea and she said I might as well use the fan base I’ve got and use the people that follow me and start designing stuff to spread the word about veganism. So I design all these eco-friendly tee shirts and we have a website called The Freakin Vegan.

You’ve got a full album ready to roll. Tell us about it.

Lauren: It’s going to be called Burn The Beauty Queen. I’ve written all the songs on the album and it’s going to be out September unless there’s any crazy things happen. The concept of the album is based around a girl kind of kept in a box, kept like a pretty ornament. It’s like you have to be a certain way and act like a lady. The songs are about how frustrating all that is, like Burn The Beauty Queen, the whole idea of how you have to be, getting rid of that completely and being wild. Ha-ha! 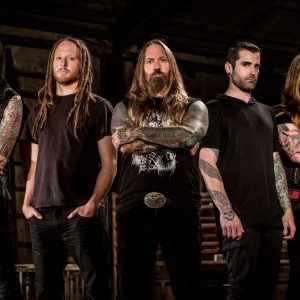 Dez Fafara is one of heavy music’s stalwarts busily creating great sounds with both Devildriver and the rejuvenated...
Copyright 2017 Devolution Magazine. All Right Reserved.
Back to top