Dez Fafara is one of heavy music’s stalwarts busily creating great sounds with both Devildriver and the rejuvenated Coal Chamber. He has a dedication to his art and a work ethic that is second to none. Gary Trueman caught up with Dez aboard the Devildriver tour bus where the band were touring with his close friend Al Jourgensen’s Ministry. Up for discussion was the new album, being a part of two active bands and how important his family are to him.

Your latest album is called Trust No One which could be taken to be about all manner of subjects but lyrically it seems to be quite personal. Is that true?

It is personal but I think it’s pretty incumbent upon artists to share their vision of what they see around the world. You go to an airport and you see something or say something, you go into my area where it has neighbourhood watch, you look all around there’s cctv everywhere. That’s really the basis of where that came from but there are some very personal lyrics on the record and I got a lot off my chest for sure. The reco0rd lyrically encompasses a lot of different views. It’s not just angry, there’s a love song to my wife, there’s some very positive songs about keeping your head up under difficult circumstances. All that rolled into one, Trust No One seemed to fit.

The band is well established member wise. Does that make things easier when it comes to writing new music?

Well I parted ways with the drummer I had for nearly twelve years so we have a new drummer and we’ve never really had a permanent bass player since our first bass player left to go to rehab. Neil my new guitar player is the one I primarily wrote Daybreak the first single with. So there is a lot of new blood but there is also something very established within Devildriver and that’s our groove and our sound. I like to say Devildriver is bigger than all of us including me. There’s a certain sound, a certain something that has to be accomplished and that’s what you get on this record.

We spoke to you quite recently for issue 38 for a Coal Chamber interview. Do you sometimes have a piece of music going round in your head and you’re writing for one band but you think it would fit the other band better? Or do you pigeon hole lyrics because the bands are very different?

I write daily and often those things don’t even make it, but yeah Coal Chamber has its own separate entity, its own animal completely from Devildriver. So when I’m writing I know who or what I’m writing for, so they don’t spill over. They never do and they’re so far apart there’s no way they can spill over. Sometimes I do write something and I think that would be really good for Devildriver but I couldn’t use it for Coal Chamber.

You’re a family man, you’ve got three sons who are growing up fast now. Has it been tough touring and missing out on family life?

It’s the toughest thing on earth. I’ve been with my wife almost nineteen years, she’s my best friend. My three sons are everything to me. But a man has to do what a man has to do and they understand that. I grew up blue collar, working class, I was a bricklayer for a long time, my dad’s in construction. I saw him only have two or three weeks off a year. I get to go home after this and get three weeks off before the next tour so I tend to make sure there’s a ying and a yang there. I take time off when it’s needed and I get back on the road when it’s needed.

I’m an extremely private person. A lot of people say that this job is not the right job for me but I love music and I love the stage. Everything else about it gets to me sometimes.

Do you find that your long term relationship, the family that you’ve had for such a long time keeps you grounded?

Oh one hundred per cent. I’m an extremely private person. A lot of people say that this job is not the right job for me but I love music and I love the stage. Everything else about it gets to me sometimes.

How do you decide what songs make it onto a set list? How do decide on a balance between getting new music out there and pleasing fans with old favourites?

Well, being so private I’ve managed to reach out to people on Instagram and Twitter on a daily basis and there are certain songs you have to play. You’ve gotta play ‘Clouds Over California’. People want to hear’ Meet The Wretched’. From the new album we’ll be playing ‘Daybreak’ as it’s the single. In a shorter set we’ll play two songs off the new record, in a longer set it’ll be three or four songs. You’ve got to reach out and ask people what they want to hear.

It must be gratifying when fans latch on to a new song and it becomes one of the classics that must be played.

It’s pretty cool. We released ‘Daybrea’k, and we’ve released ‘My Night Sky’ with a killer video and now people are singing the words.

We’re living in pretty turbulent times with us voting out of Europe, the Trump/Clinton face off for President in the US and we’ve got Syria and all that happening there. Do you think these are the kind of times that bring metal and genres that have something to say to the forefront?

Do you have any pre show rituals like some people do?

I sit up with my good friends in the crew, I hang with the crew most of the time. The band comes up, maybe have a cocktail or two and listen to music always two hours before.

What do you think are your best and worst character traits?

Hmmm, good question. My best character trait is that I’m as honest and loyal as a dog. I’m truthful. That could almost be my worst quality is that I really don’t give a fuck and that I will tell you what I think. That comes from a blue collar upbringing, a punk rock upbringing. I was the kid walking through the mall with a coloured Mohawk that didn’t give a fuck. And look at me now, it’s still pretty apparent. That honesty trait for some people can be a bad trait but for me I think it works in my favour.

If you could go back to a point in your past and edit your life is there anything you’d want to change?

No I wouldn’t change a thing. I had a pretty rough upbringing so I was just thinking about my upbringing and what could I have done? But I couldn’t have done anything, I ran away from home, I fought stepfathers, I ended up in prison and there’s nothing I could have done differently. I did everything I could do to keep myself alive and fed and get myself to where I am now which has some form of stability with a family and a career. I wouldn’t change anything. 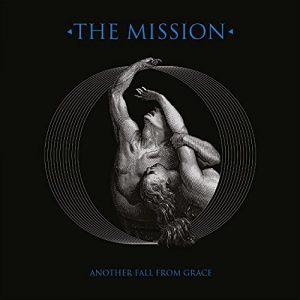 The Mission - Another Fall From Grace (Eyes Wide Shut Recordings) At the beginning of the year Wayne Hussey revealed...
Copyright 2017 Devolution Magazine. All Right Reserved.
Back to top