Interview: As Sirens Fall ” It’s such an important part of this band, the sense of togetherness and family.”

One of the great things about music right now is the willingness of younger artists to try new things. The state of the scene itself is much stronger because emerging artists are ignoring traditional boundaries. One of those bands gaining attention for forging ahead and playing to the their own tune are As Sirens Fall from that ever fashionable bastion of music, Keighley. Gary Trueman chatted to Mikey, Bailey, Adam and Jason about how they kept their momentum going in tough times and why musical diversity is a key ingredient in their song writing. 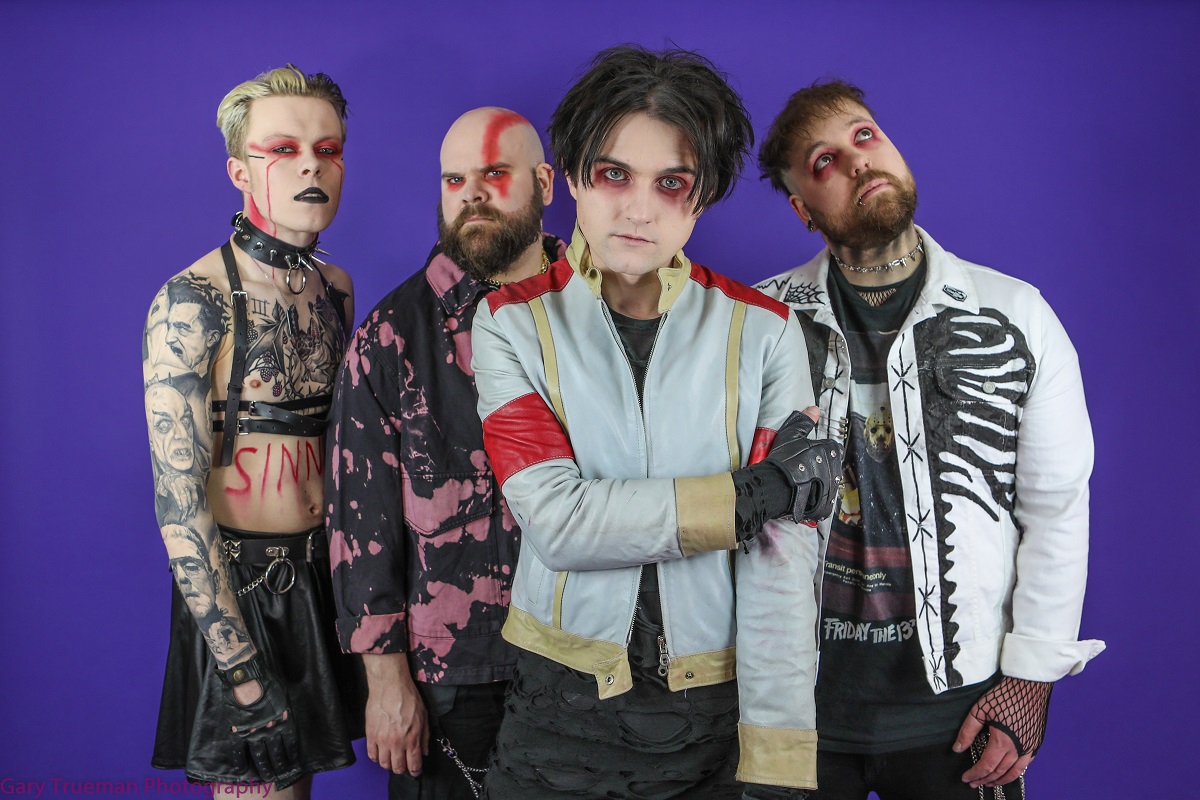 Hi, so would you like to introduce yourselves for our readers. Who does what in the band?

“Bailey plays drums and tries to look good on stage. Jason is our bass player and Adam is our guitarist. Mikey is the singer.”

People are looking forward to how things are opening up again after the enforced hiatus. You had built up a bit of momentum around 2019 and into 2020, how have you gone about keeping that going and rebuilding?

“We’ve been quite good at keeping our momentum up since before the pandemic. We had a really cool tour just before the world ended. We had a lot of music recorded and we had as music video done. We were able to just keep pushing music out and thankfully we had our Patreon supporters. They helped us to subsidise things. We ended up putting out an EP called L’appel Du Vide and we’ve been able to carry on since then. We put out a single last year called Dynamite and we’re just going to keep on releasing music.”

So effectively you used your new music and socials to keep the ball rolling.?

“Pretty much. It was tough, we didn’t see each other for months and months.  It sucked. But we kept our online presence up and it made a massive impact because our last proper tour was nearly three years ago. We managed two recording sessions in that time as well despite the difficulties. When we were in the studio we weren’t allowed everyone in at the same time and we were wearing masks. So you’d get Adam and Mikey working on guitar stuff while Jason and Bailey would pop their heads through a little glass window at the side.  It does make things more challenging because in the writing process people will hear things and pick them out and you couldn’t really do that without everyone in the room. We have at least one song where we have the idea to go back and work on it again. But on the whole we managed to carry on.”

Obviously you kept in contact with each other throughout that period of time and the writing process changed. Were you sending each other bit and pieces to work on as ideas?

“We were doing it all through Zoom meetings. We’d get together, arrange a time, and then do a Zoom meeting. Mikey would screen share what he had in his room from his desk top and we could see what he was mixing and share sound to us. We could all hear it at the same time. So essentially we did get to write together in our own homes. We could all voice our opinions to each other whilst all sat in bed. It was really cool because we managed to get solid demos down virtually. Then go to the studio to work on it properly. It was challenging but using that method, we managed to pull it off.”

Even though you’re all able to work back together again is it something you’ll still use moving forward?

“It is kind of a way that we’ve worked before anyway. Mikey will make demos on his own and then pitch them to the rest of the band so they can develop them. So we were able to keep our momentum up. We are really good at staying in touch with our fans and staying in touch with people. It’s such an important part of this band, the sense of togetherness and family. Because that was already so strong, apart from not being able to physically be with people it wasn’t that much of a change. We’ve just done three headline shows and they’re the biggest shows we’ve ever played and they’re the best shows we’ve ever played.”

You jumped right back in there with three shows that went down so well. Have you got more booked for later in the year?

“We’ve got a couple of festivals we’ll be doing. There are potentially some other things happening in the latter half of the summer, around Halloween kind of time.” 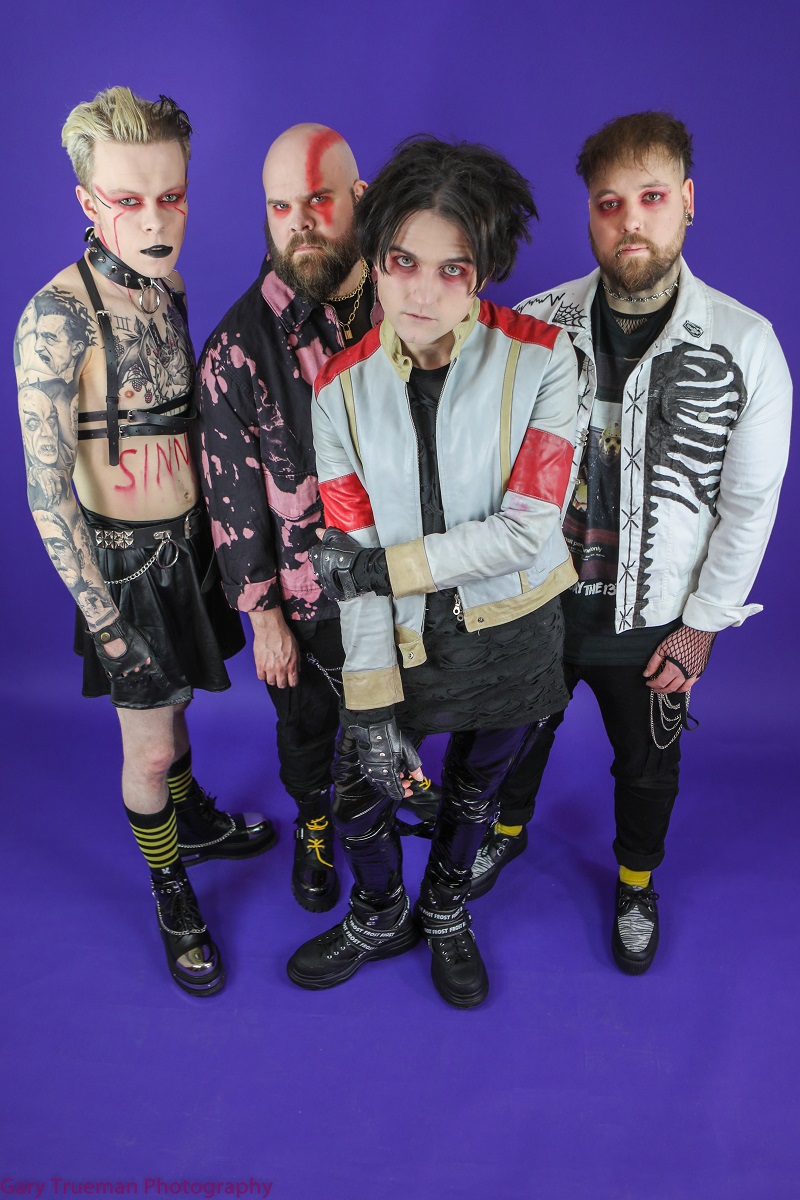 You’ve got a very modern rock/metal sound.  A bit Emo too. You’re one of the new breed of emerging artists that have something different about them. So where do you all take your musical influences from?

“We think we work together so well because we all listen to different types of music. It’s just so diverse. It’s incredible because it gives us a chance to create something unique. We’re bringing all those influences together and making it feel like a rock theatre. We’ve got Queen and Bowie and all the iconic 70s bands, combined with modern day pop. Then there’s Sum 41, Green Day, Billy Talent and stuff like that. And old punk rock. Emo too.  It makes us not scared to jump between genres because of the bravery of some of those acts that we do idolise. When we started this band there was never a conversation about this is what we’re going to sound like, or here’s three bands we’re going to smudge together to see what happens. It’s just the way we write, how we are feeling and expressing ourselves at the time. That’s what comes out. There are no rules. We don’t say no to anything. The only rule is that it’s honest and that it’s us. That’s part of what makes it really cool to be in this band.”

Who does what? Does Mikey do all the lyrics as the singer? Who does the bulk of the writing?

“Lyrics are largely Mikey’s wheelhouse. He’s singing the lyrics so he’s got to believe them. The musical background is completely different for each song. Sometimes it’ll be a demo that one of us has put together. Someone might come in with an idea for a chorus or someone might start to finish it because they had a vision and just chased it. Another way might be we’re all in a room together and Adam is noodling about on his guitar and somebody else catches it and says play that again and half an hour later we’ve got a song. So many of our songs are written that way.”

What about delegating who does what outside of the writing?  Stuff like social media and delegated driver, the bits people don’t often see.

“Mikey is the main man for social media. He puts a lot of time and effort into it. He’s got a van as well so he a lot of the driving. But the rest of the band unload all the gear. Mikey is very good at the Tetris of loading the van though. He’ll stand in the back and put everything in the right place. Increasingly we’re looking at having a driver and someone on merch which means we can focus on the performance. Recently we’ve been lucky enough to have been able to afford that.”

You put a lot of effort into your look, your stage image. Is that something that was always going to be a part of As Sirens Fall, to put on a show rather than just play music?

“We’ve lost count of the amount of times we’ve told people that if we had the budget the show would have more pyrotechnics than Rammstein. We love theatre and the show and the performance. The first six months we were very much a jacket and jeans band. Then we changed direction and had a uniform. Now we’ve kind of completely abandoned that and just want to express ourselves personally without a barrier. As long as we all feel comfortable with what we’re wearing, then it feels great to be honest. For a long time it was easy to tick the interesting and memorable box with a uniform, but it got to the point where it didn’t feel quite right putting it on. We wanted to find the cool things about us (as individuals) and turn up the volume on that. We changed a lot over the pandemic, but if we’d come back the same band, that would have been incredibly boring.”

Bailey: “Easily it’s got to be Batman. He’s the coolest and Adam West played him. Everyone tells me I’m the kind of person that lurks in the shadows. So I feel that’s kind of where I’m at.”

Jason: “I’d be Burnt Face Man. Burnt Face Man was an early 2000s David Firth cartoon that was on the internet. He’s basically a really crap super hero that has no abilities at all, but he’s funny.”

Adam: “I’m going to generic and say Spiderman because the Peter Parker side of me, I’m pretty quiet. I’m a shy person until I’m behind my guitar. It’s like putting a mask on.”

Mikey: “I was literally going to say that almost word for word. Spiderman, shy, a bit awkward but very resourceful. He’s good to have around.” 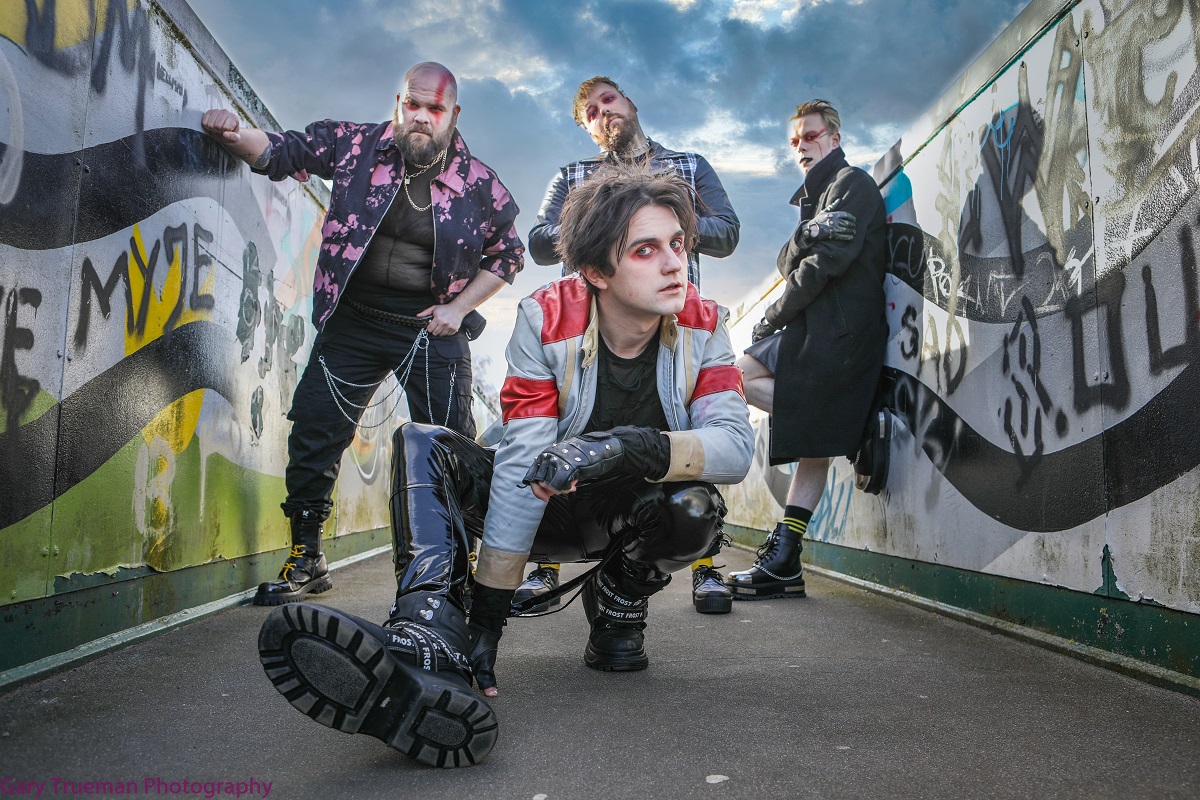 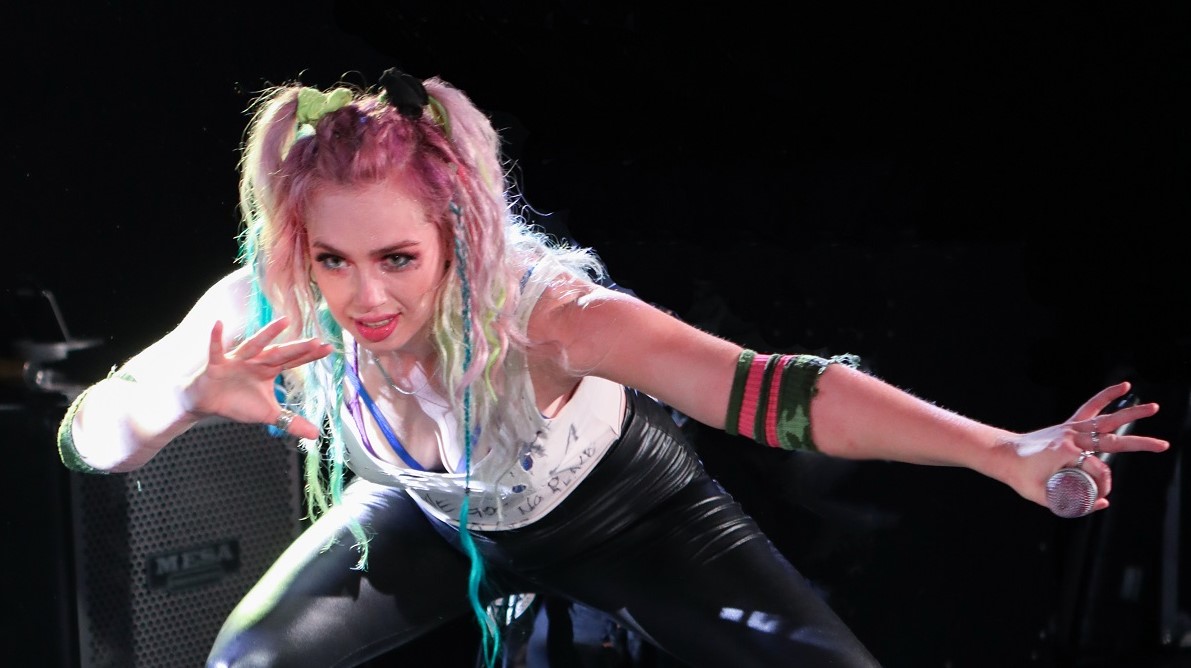 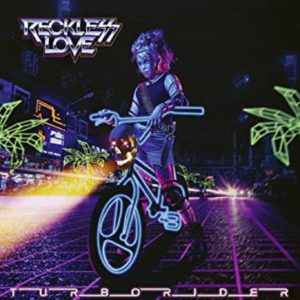