Much maligned and often dismissed, graffiti artists have slowly edged their way into popular culture simply by the weight of their talent. By letting their art speak for them graffiti is now becoming appreciated for what it really is – an art form. Adam Moono and Karl Barfoot are two such artists based in the East Midlands. They paid a visit to Gary Trueman chatting to him about paint types, creative style and their favourite art.  They also got their cans out during their visit to decorate a new studio space. 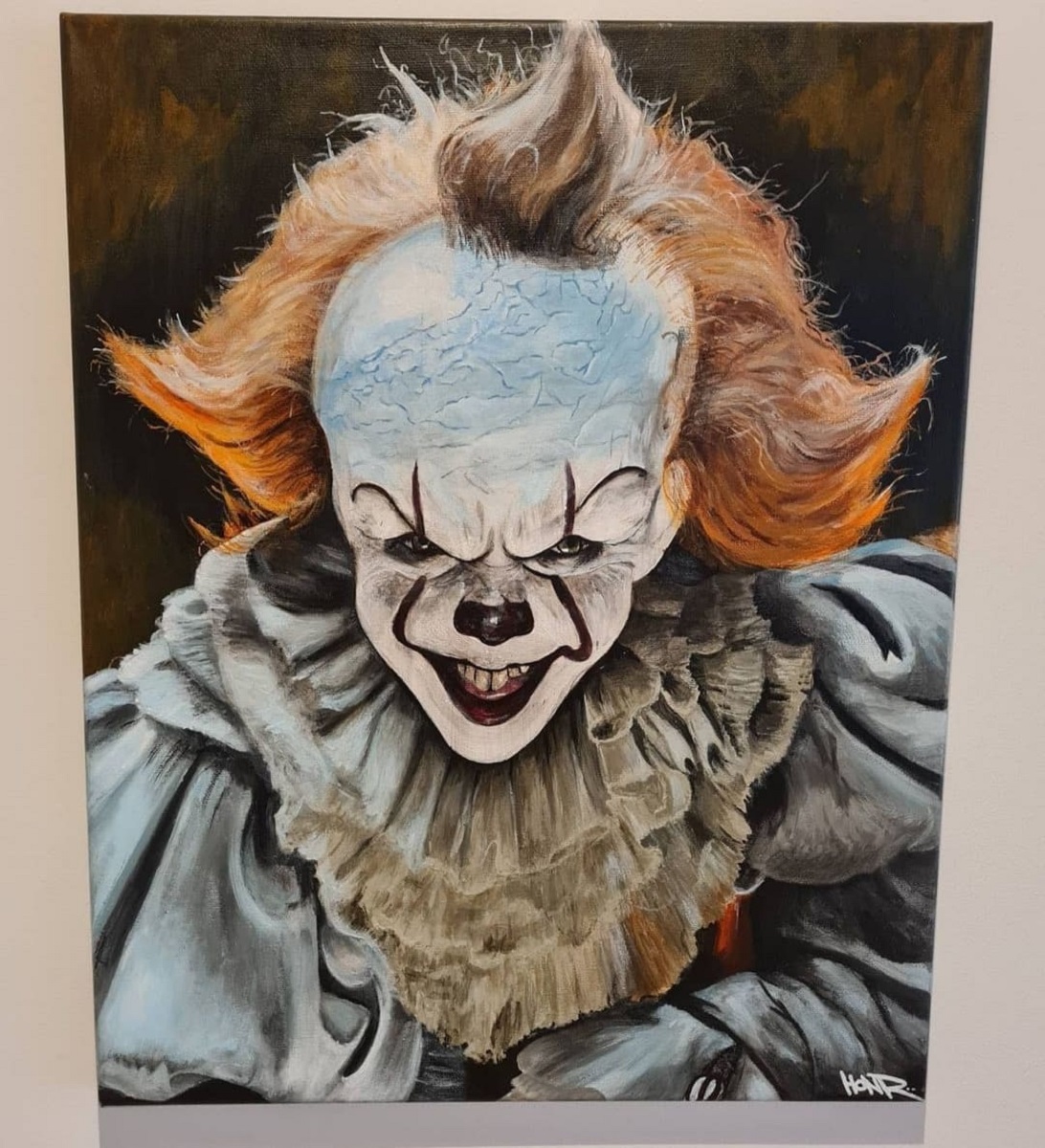 How did you first get into doing graffiti?

Adam: “I started watching rap videos and I saw all the art in the background of the music videos. I thought that’s something I could start doing.  So I got a can and started, maybe some places I shouldn’t have been, you know how it goes haha.”

Karl: “Similar story with me, music culture and started tagging, and it went from there really, started painting.”

It’s not just tagging though there’s a lot of artwork involved. Do different artists specialise in different styles?

Karl: “Definitely, every artist has a different style. You can normally tell an artist from their letter style. Same with certain styles of realism, you can see the differing styles of artists.”

So what are your own particular styles that people would most associate with you?

Adam: “My personal style is cartoony and bubble style lettering. I’m not that good an artist to do the really detailed stuff, but I’m more cartoon and bubble letters.”

Karl: “I’m more realism and I do a lot of straight edge lettering, big bold stuff. I do 3D as well.” 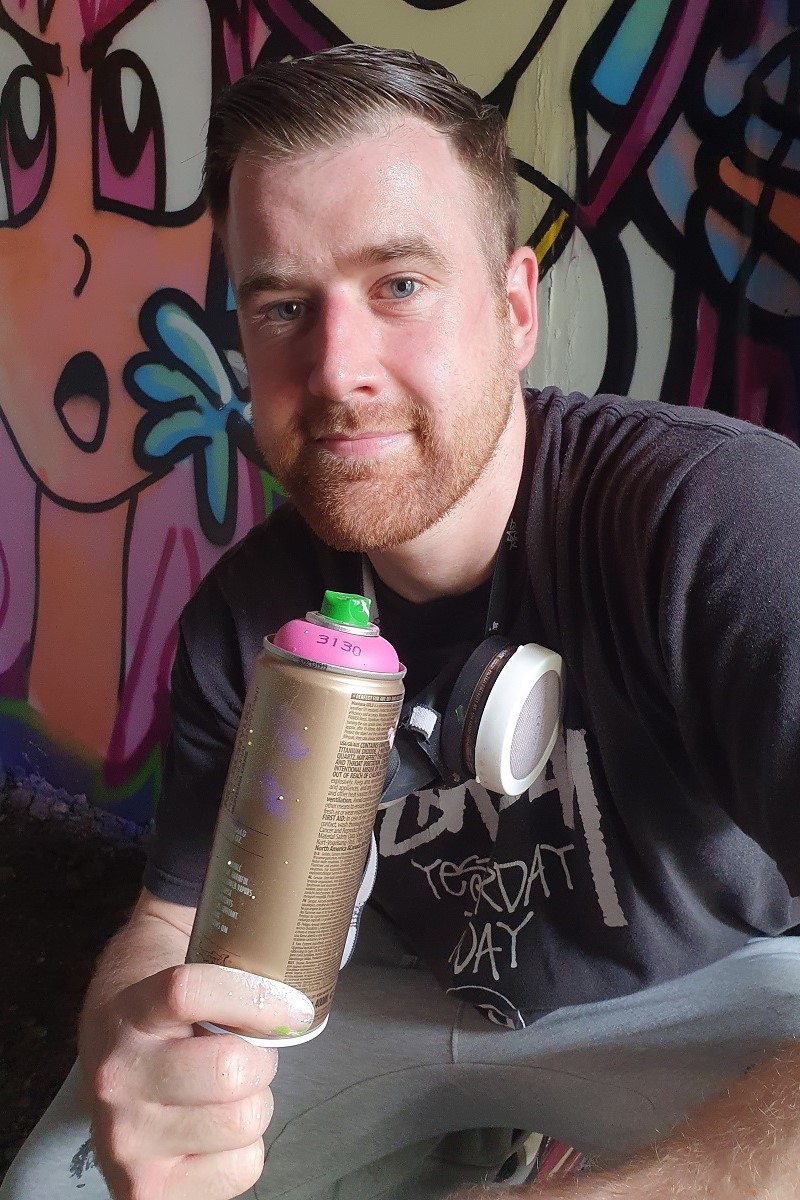 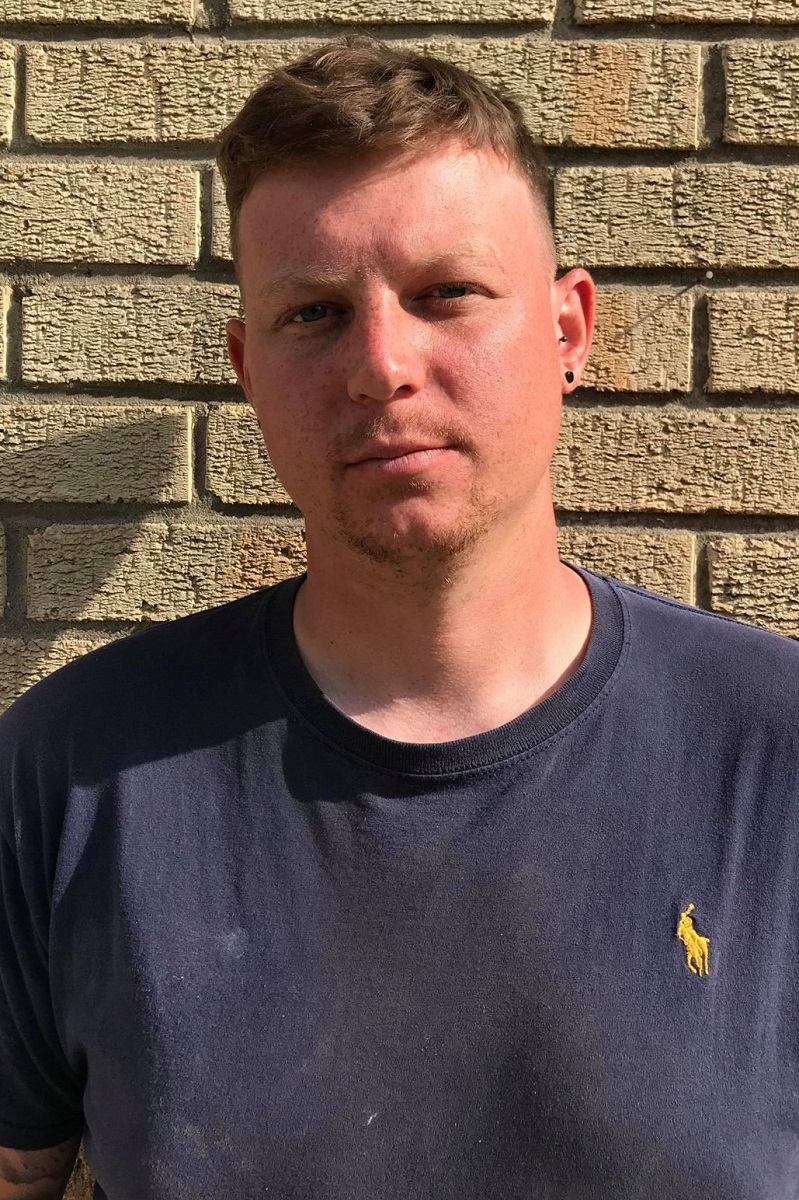 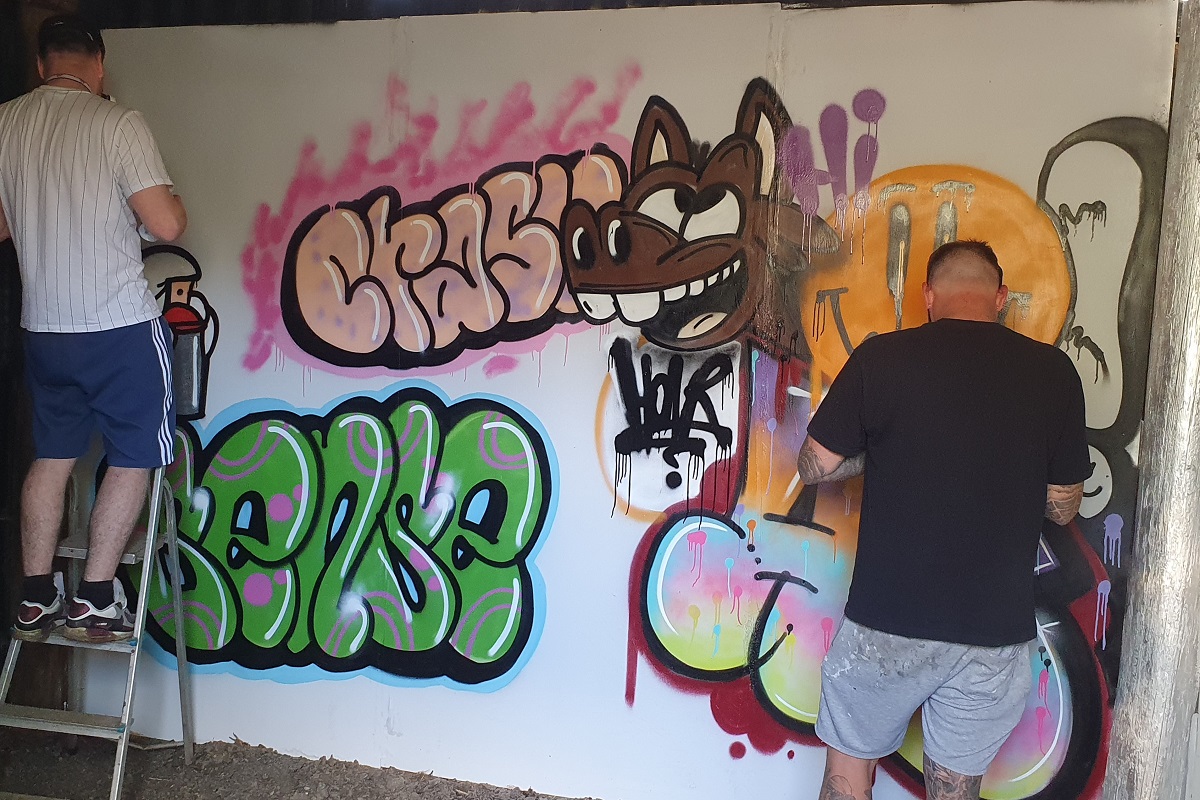 What paint do you use?  And there must be good paints and bad paints so what’s the best to use?

Adam: “The best paint available is called Montana 94 and then the second best is Montana Gold.  They’re both very good paints.  Even Loop, that’s the cheapest paint available but it’s still a solid option. Compared to the Halfords paint, when you spray it you can tell the massive difference in quality. Halfords will be just pssssh, and it’ll drip, but with this graffiti paint it just stays on. It’s brilliant stuff. It will last years and years as well, fifteen, twenty years.”

Karl: “There’s different quality paints and different nozzles for different sharpness of lines. Fat caps for coverage, you could cover say a metre square in seconds with a fat cap. I use Loop for my fills because it doesn’t need to be neat. And I use Montana for outline.  I can control the pressure of the can better for outlines.”

Most of the backgrounds you use will be brick and concrete. So what’s the difference between using a virgin wall to one that’s already got paint on it?

Adam: “If you spray on a brick wall that’s already had graffiti on it, the paint applies a lot quicker. But if you do get a virgin wall, plain brick, then you roller it first.  The paint applies so much easier.”

Karl: “If you’ve got time roller it. It sucks more on fresh brick because it’s porous.”

With some of the images that are going to go with this feature it’s indoors in an old stable and on primed chipboard. It’s quite a slick surface. How did you find that to spray on?

Adam: “It’s a brilliant surface to be fair. The paint went on like a perfectly rollered brick wall and it stuck to it very well. A very easy one to paint, I’ve had a lot worse.”

Karl: “I found you had to move a lot faster, same as if you’re doing an interior wall like when people want bedrooms doing. You have to move faster or the paint will drip. The smoother the surface the faster you need to move.” 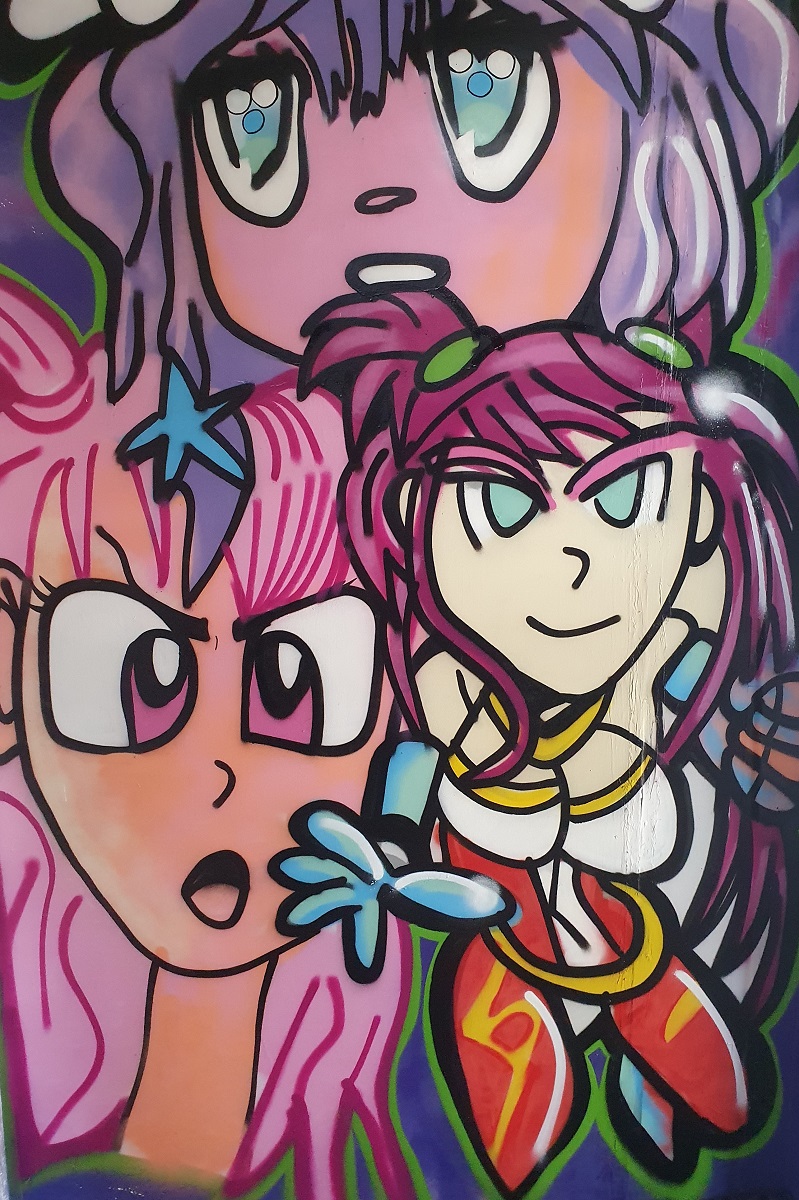 In a way graffiti on a wall is a little bit like tattooing, if you make a mistake it’s there. How easy is it to cover up mistakes?

Adam: “In graffiti it’s very easy to rectify a mistake.  The paint layers that well you can do a thick black line and if you wanted to go over it in white you could spray over it and you wouldn’t see the black underneath. The paint is very forgiving if you do make a mistake.”

Karl: “You can easily go back over the top a re-line it and start again.”

What about drying time?

Karl: “It’s designed to go off quick so you can layer it on.  So it’s touch dry in literally five minutes.”

Adam: “I don’t know if it’s officially made for graffiti but they are based with graffiti in mind. They are art supplies, for spraying furniture and stuff. But the majority do use it for graffiti.”

Karl: “It says pro-writing tools on the cans. All graffiti artists use them. Like Adam said earlier, if you used Halfords paint, you can tell by pressure and cap that it’s totally different.” 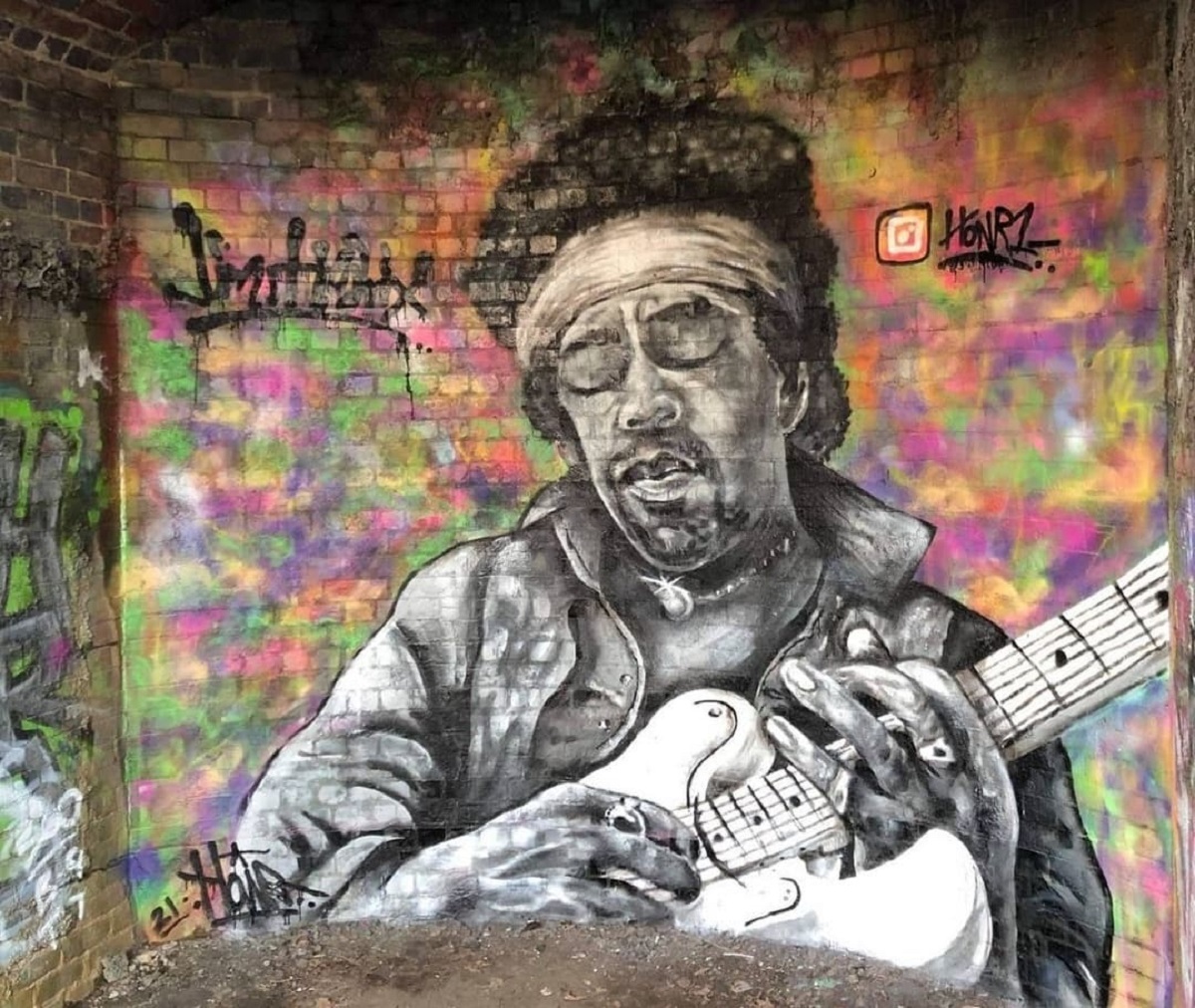 What’s the best piece of graffiti you’ve ever seen?

Karl: “Mine would be Smug1 who did a gable end in Glasgow of a man with a robin on his shoulder. That was what really set me for my realism side. There is some really nice stuff in Peterborough. A lot of legal artists go there. We paint there. You see some amazing stuff there.”

If you had one building and one piece of art you would love to do, anywhere and anything, with full permission, what would you want to do and where?

Karl: “Mine would be something in New York city. My dream place to paint. I’ve always wanted to paint in New York. Some realism with some lettering in a really public space. 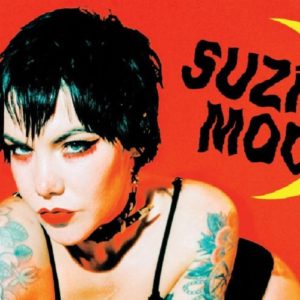 Suzi Moon is premiering her brand new video 'I'm Not A Man' taken from her debut EP 'Call The Shots'. The Turbulent Hearts...
Copyright 2017 Devolution Magazine. All Right Reserved.
Back to top