Interview: Blood Crush “There aren’t any genres any more really if you think about it.”

Who’d be a new band right now?  How to make your mark, how do you get seen, and for all the right reasons? Blood Crush only formed in 2019 but have already gained quite a significant amount of support on the strength of their debut single and no small amount of hard work. Gary Trueman chatted to the Brighton based four piece about getting started, their choice of name and who would play them in a film. The band are Nicole (vocals), Hareth (bass), Brad (guitar) and Phil (drums). 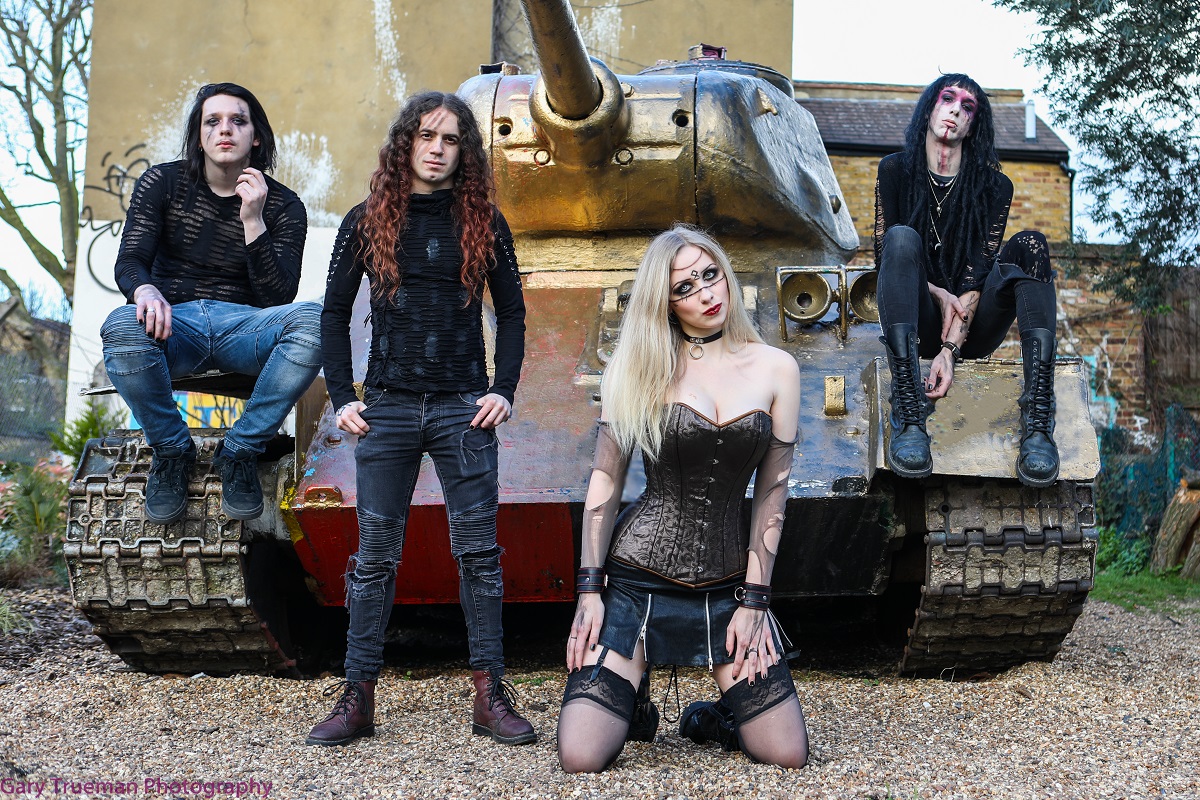 How would you describe Blood Crush to someone new to the band and what are your main influences?

Nicole: “We are a gothic industrial metal band. We have a lot of melodic elements in our music. Our main influences would be a combination of video games, cinematic films and music.”

Phil: “We’re quite inspired by HIM, In This Moment, Marilyn Manson, those kind of sounds. Dark vampiric kind of things. We have melodic elements too, so lots of influences.”

Where does the name Blood Crush come from?

Obviously these days  music has amalgamated and is crossing over.  Do you think that’s an important thing to progress music, that people explore and don’t stay in their tight, narrow little channels all the time?

Phil: “There aren’t any genres any more really if you think about it. Everything is just a beautiful mix of lots of different influences.”

You’re a pretty new band. So how far down the road are you in terms of albums, singles and videos?

Brad: “Well we have an albums worth of material written already and we have just released our first single and music video called Twisted Love.  We’re currently preparing for gigging and recording our second single soon. “

Phil: “We’ve got a couple of gigs coming up and we’re working n an eight track album coming up later this year.”

Brad: “We’re already quite fortunate to have a moderate following online. So it’s already given us motivation to crank things up.”

How long have you been going for?

Nicole: “When I came to Brighton in the summer of 2019 I really wanted to form a metal band because I was missing playing. I found… auditioned Bradley, then later I met Herath and Phil. We can say we’ve been going since the summer of 2019 making music. And now we just want to release as many things as possible.”

So you’ve got an album’s worth of material in under a year. You’ve done well.

Brad: “ We’ve put a lot of time into the band. It’s a big commitment.”

It’s important to not have just one person committed to a band though isn’t it. You need everyone committed?

Brad: “That’s what really drew us to Herath and Phil, because they were throwing themselves into the project. In a project like this where we just want to go full steam you can’t have anybody that’s a bit flaky.

Hareth: “I feel so lucky to have met people that pump out such great stuff and are so hard working and inspiring. It’s been really fun so far.”

A lot of people have been commenting on the video saying how well written the music is, how well it fits together, and also how strong the vocals are but that they don’t over power the music.  That balance is really important isn’t it?

Nicole: “When I started this band I wanted to make sure that every band member should have as much attention as the other. Everyone is equally important. Everyone is a character in the band. That’s something I always want to keep.”

Who would be your dream person to share a stage with and why?

Nicole: “Marilyn Manson.  What reason is there not too? He’s a great inspiration and someone you can learn a lot from as well.

Herath: “We could always stick Rob Zombie on there, and Skinny Puppy and Nine Inch Nails.”

Brad: “Chas N Dave haha.  It would be pretty cool to play with some of the old big thrash bands.”

Phil: “I’d love to share a stage with Jinjer or Spirit Box. They’re really awesome up and coming metal acts with incredible female vocalists as well.”

There’s been a lot in the media recently where they’ve been taking away the all male bands from festival line ups and it’s not left a lot of female representation.  While gender balance is very important do you think it has to be done naturally? There has been some talk about Download never having had a female headliner.  Do you think there are any out there that could do that?

Hareth: “Download is an amazing festival and there are always new things but in terms of headliners it’s quite safe.”

Nicole: “There are bands like Nightwish that can handle a big audience. But there is definitely room for the newer female fronted bands to progress.”

If at some point someone was going to make a film about Blood Crush.  Who would play each individual member of the band?

Hareth: “David Lynch would play all of us haha.”

Nicole: “Somebody to play me would probably be Michelle Pfeifer, like in the 80s.”

Brad: “Probably Danny DeVito, or Andy Parsons if he had hair.”

Phil: “You already took the best one, Danny DeVito. So I’m going to say a young Ozzy Osbourne. But also Robert Smith just so I can see him struggle. 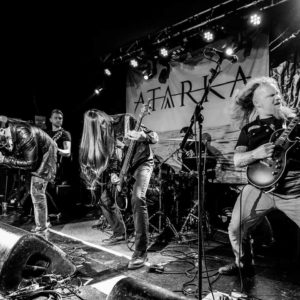